London: The World Health Organisation says Australia and other countries face a “genuine dilemma” about how to move away from their zero-COVID approach and are now more at risk than other countries as a result of their elimination strategies.

Dr Mike Ryan, WHO’s head of public emergencies, told a virtual news conference hosted in Geneva that vaccinations were the only way out of the pandemic for countries that had adopted the elimination strategy, but said vaccination take-up rates would need to be drastically higher. 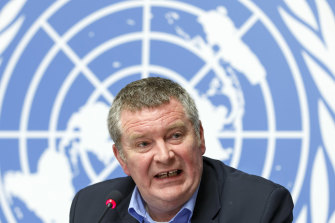 Dr Mike Ryan said high-level vaccination rates were the way out of the pandemic.Credit:AP

“It is a genuine dilemma for countries who have worked so hard to keep their virus transmission low, to keep their death rates low,” he said, responding to a question from The Herald and The Age.

“It is tough for countries to continue to keep low incidence in the context of so much community transmission in other countries, that is a very tough thing.

“So it is a difficult decision now for many countries who’ve managed to keep their very low- or zero-COVID strategies in place for so long to open up again, with the probability that disease will be re-imported from other countries in which the disease is not under control.” 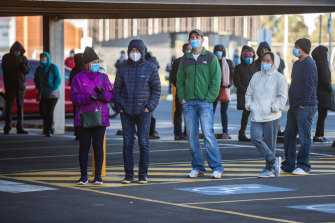 People wait in line to get a COVID-19 vaccine in Melbourne last week.Credit:Scott McNaughton

Dr Ryan said that this scenario would require high-level surveillance and a “very switched on population” but that ultimately the solution lay with vaccines.

“High-level vaccination levels are the way out of this pandemic,” he said.

“Right now it’s not 100 per cent clear from the data where the figure of vaccine coverage should be in order to fully affect the transmission, but it’s certainly north of 80 per cent coverage to be in a position where you could be significantly affecting the risk of imported cases, potentially generating secondary cases or causing a cluster or an outbreak,” he said.

That means at least 32 million doses of vaccine would need to be administered in Australia, given Prime Minister Scott Morrison has said that 40 million doses are required to fully vaccinate the adult population. Currently, just 5,076,413 million doses have been administered.

Dr Ryan said it was not the case that only countries with current outbreaks needed vaccines, saying those with low virus transmission were most susceptible to the virus spreading because of the very measures taken to stamp out the disease.

In July last year, the Australian Health Protection Principal Committee (AHPPC) successfully urged the National Cabinet to adopt the goal for Australia to have no community transmission of COVID-19.

The National Cabinet subsequently said: “The goal remains suppression of COVID-19 until a point in time a vaccine or effective treatments are available, with the goal of no local community transmission”.

The “no community transmission” goal has required some of the worlds toughest restrictions, including ongoing snap lockdowns like the one now imposed in Victoria, a ban on citizens leaving the country, and a limit on the number of citizens who can enter Australia.