On this day of reckoning, Melbourne’s Treasury Gardens feel like no place for old men.

“The future is female and it is furious” reads a sign near the old Treasury building. “No Swinging Dicks” says another. The sun is out on a glorious autumn day, and as far as you can see, there are women in black. 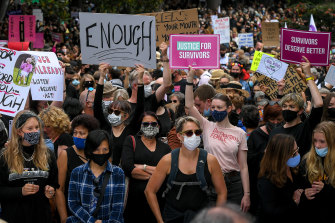 No place for old men: An estimated 5000 women gather for the March 4 Justice demonstration in Melbourne’s Treasury Gardens.Credit:Eddie Jim

And they are angry.

“To hell with the patriarchy!” they chant.

Why are they angry? Where do you start?

“It’s a fight for women to be respected and valued, to control their bodies and their social life,” says Karen Sims, a 54-year-old communications professional who’s holding up a sardonic sign: “Karens for Justice.” 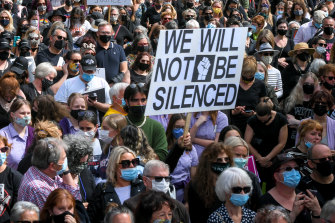 Women of all ages came to the Melbourne march. Nearly all of them have stories about being treated shabbily by men. Credit:Eddie Jim

“We have been complaining about this since the beginning of time,” she says. “This is nothing new.”

The women in the gardens are of all ages. There are teenagers in their school uniforms and grey-haired women steadying the arms of white-haired mums.

There are some men as well, but they don’t say much. It is our turn to listen. Listen closely enough and you start to understand what this movement is about.

Elise is 74. She has seen other women telling their stories and wants to tell hers.

It happened on a Glenferrie Road tram when she was 17. She was standing amid a crush of passengers, with one hand clinging to a handrail for balance and the other grasping a basket. Then she felt his fingers.

She looked at the boy and told him to stop. She told him, but she couldn’t make him; not the way they were wedged between bodies in the crowded carriage. He was wearing a grammar school blazer.

Over the years she had forgotten him and what he did. When former Liberal staffer Brittany Higgins revealed what happened to her in Parliament, it all came back.

Elise remembers the boy and something worse – the look of disgust directed at her by another woman passenger who saw the whole thing.

“I felt ashamed,” Elise says. “I felt violated. I wondered what on earth I had done to deserve this.

“I had completely buried it and it resurfaced. It made me very angry and also sad because it has been going on for so long and we haven’t moved forward.”

The women who spoke to the crowd in Treasury Gardens want this to be a moment of consequence. Former Liberal MP Julia Banks described it as a breaking point.

”Ditch the Dicks,” a sign reads. “Destroy the Patriarchy and Colony,” says another. “Sack the F—er.” Which one? Take your pick. 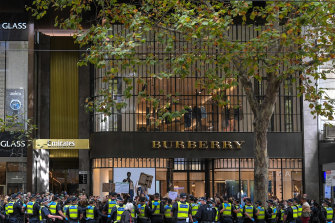 Will anything change? Perhaps something already has.

After the crowd breaks up, a group of teenage girls make the short march down Collins Street to the headquarters of the Victorian Liberal Party.

Outside the marble and glass of the modern office building, beneath signs for Emirates and Burberry, they relate experiences that, in years gone by, would have never been told. Of sexual harassment and assault. Of incest. Of rape.

They are just schoolgirls, many in their uniforms. One tells of being groped by a stranger on a tram. There is not a hint of shame, much less silence.