Welsh Health Minister Vaughan Gething today said the devolved administration is looking at rolling out quarantine on inward travel from certain areas in a bid to crackdown on the spread of the disease.

First Minister Mark Drakeford has previously called on Boris Johnson to introduce travel restrictions for people in areas of England which are under local lockdown.

In Wales, people must not enter or leave an area subjected to such restrictions without a reasonable excuse – which does not include travelling for a holiday. 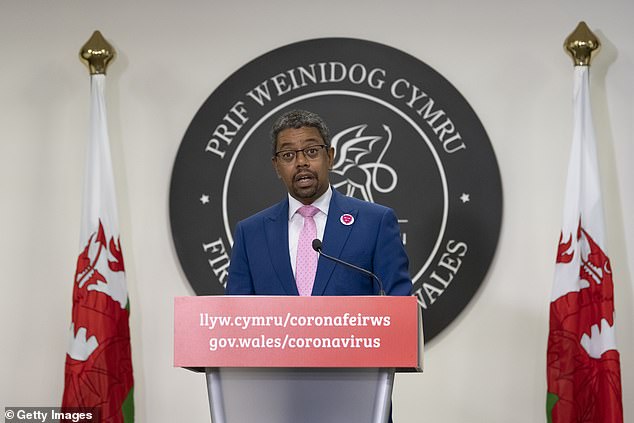 Requiring visitors from hotspot areas in the UK to self-isolate for 14 days is likely to cause controversy because it would effectively amount to a travel ban for some people planning short trips to Wales.

But Mr Gething confirmed at a press conference that the move is being considered.

He said: ‘We’re actively considering what we should do and I’ve discussed it this morning with the First Minister.

‘We have quarantine regulations for international travel.

‘So for some of the hotspot areas in the north of England, the North East and North West, and the West Midlands, if they were other countries or territories, we would have quarantine regulations for them to return to the UK.’

Mr Gething said any potential quarantine restrictions would apply to people from ‘high incidence areas across the UK’.

‘We’re having to consider how we use our power to protect lower-prevalence areas of Wales but at the same time, we don’t want to take a whole-nation approach,’ Mr Gething said.

‘There’s no good reason to prevent someone from Devon, at this point in time, coming to visit a pre-booked holiday or trip to Pembrokeshire.

‘So we are thinking about how we use something that is proportionate and deals with the reality of the threat that we face.’

Mr Gething said the Welsh Government is consulting its scientific and public health experts and will then decide ‘whether this is the right course of action’.

‘Because the measures we’ve introduced in Wales are about isolating areas with a higher prevalence of coronavirus and protecting lower prevalence areas too,’ he said.

‘It’s consistent with the approach that all four UK nations have taken to international travel and quarantine restrictions, where we recognise that higher prevalence areas in other parts of the world represent a risk to coronavirus being re-imported or having an opportunity to spread further within the UK.’

Mr Gething said it was ‘disappointing’ that Mr Johnson had not responded to a letter from Mr Drakeford asking for travel restrictions to apply to areas of England under local lockdown.

In an interview with BBC Wales, Mr Johnson had said he did not want to impose such restrictions within the UK.