Snappy snaps! Dexter the dog bares his teeth to show he hates selfies

BRITAIN'S coronavirus alert level has been increased from three to four – as cases continue to soar across the country. 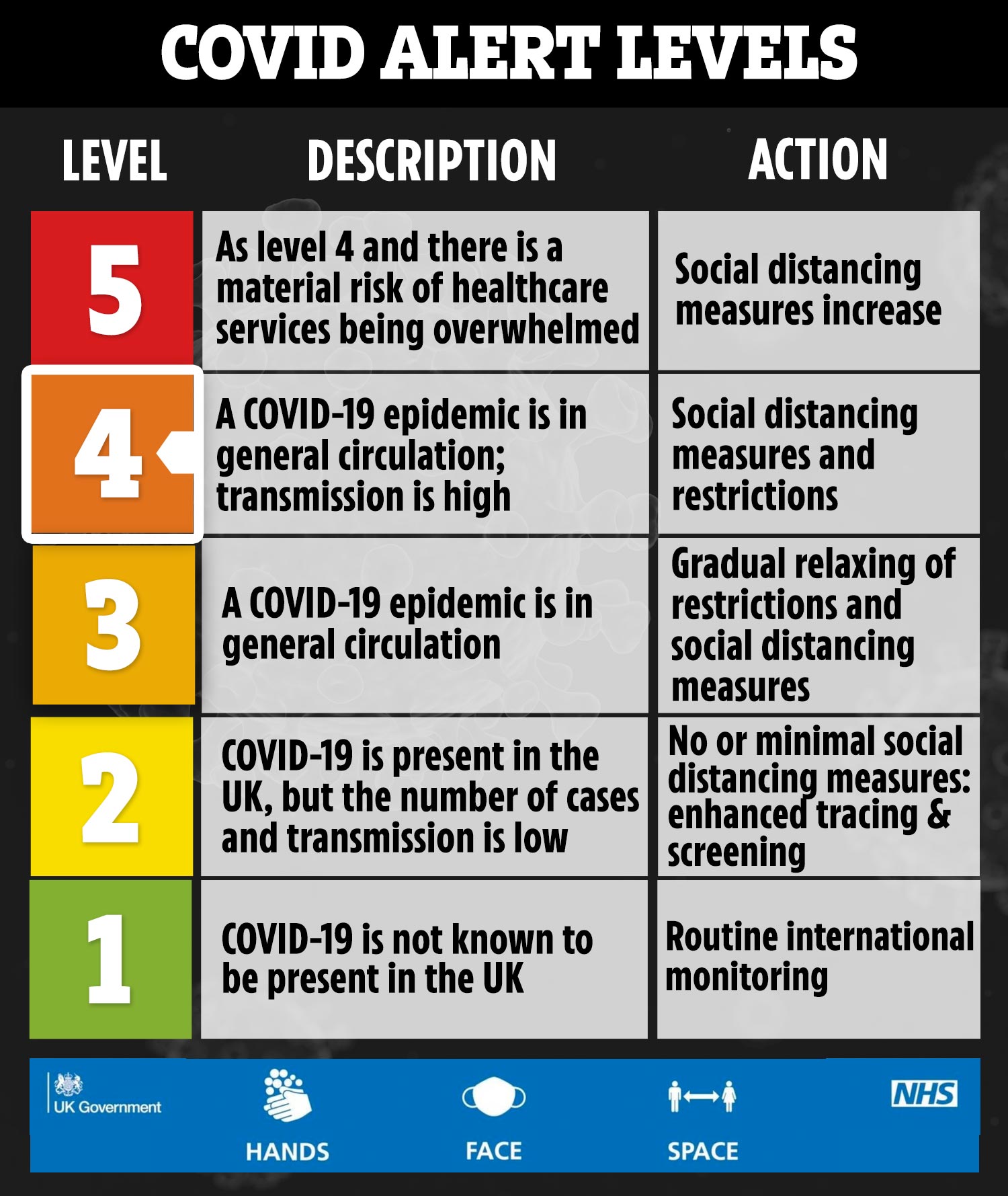 It prompted the Joint Biosecurity Centre to advise ministers they could increase the alert level from three to four on their five-point scale.

The Government's alert system, unveiled by the Prime Minister in May, represent the degree of threat from Covid to the public.

A Level 4 threat could see tougher restrictions introduced to break the chain of transmission.

The chief medical officers of England, Wales, Scotland and Northern Ireland said in a joint statement said all four nations should move to a Level 4. They added: "After a period of lower Covid cases and deaths, the number of cases are now rising rapidly and probably exponentially in significant parts of all four nations.

"If we are to avoid significant excess deaths and exceptional pressure in the NHS and other health services over the autumn and winter everyone has to follow the social distancing guidance, wear face coverings correctly and wash their hands regularly.

"We know this will be concerning news for many people; please follow the rules, look after each other and together we will get through this."

The UK was downgraded to a Level 3 alert in June allowing ministers to reduce the two-metre social distancing rule and introduce other relaxed measures. 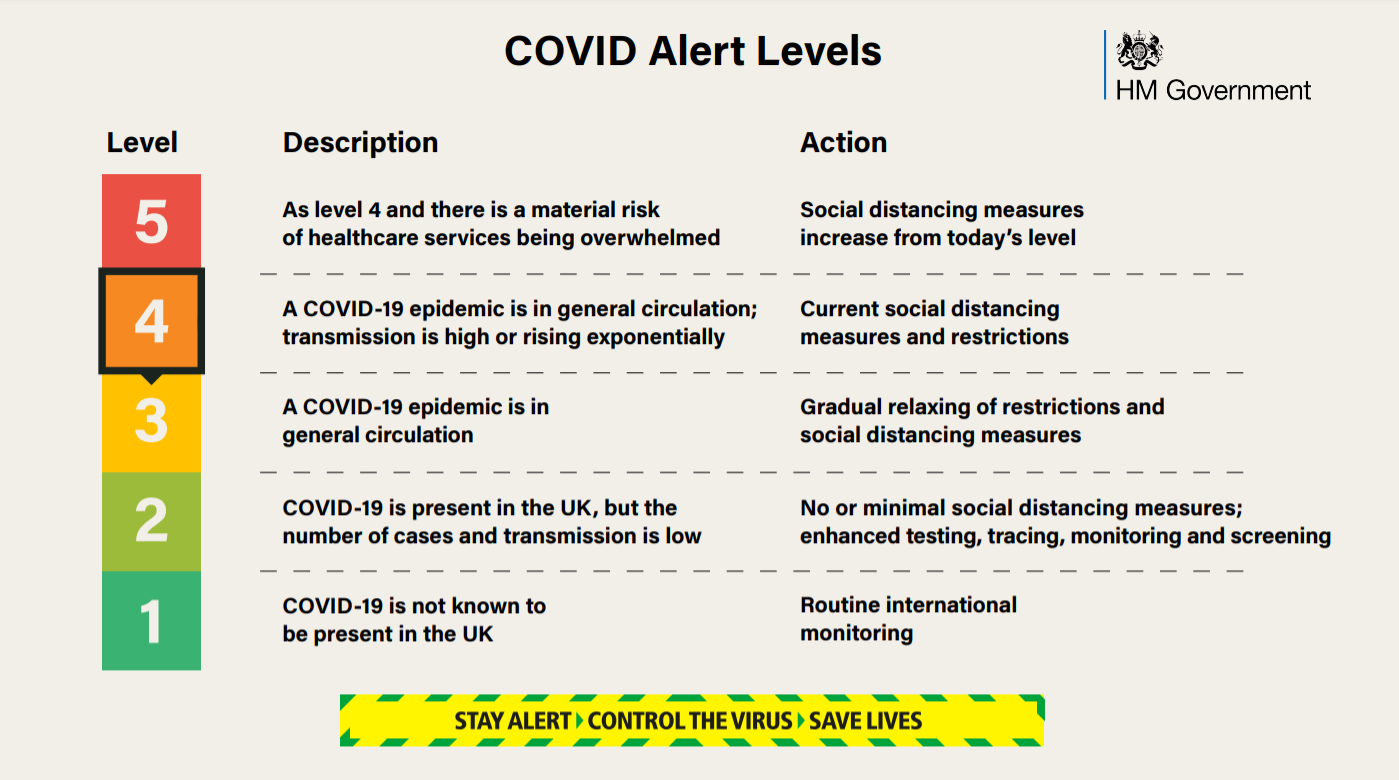 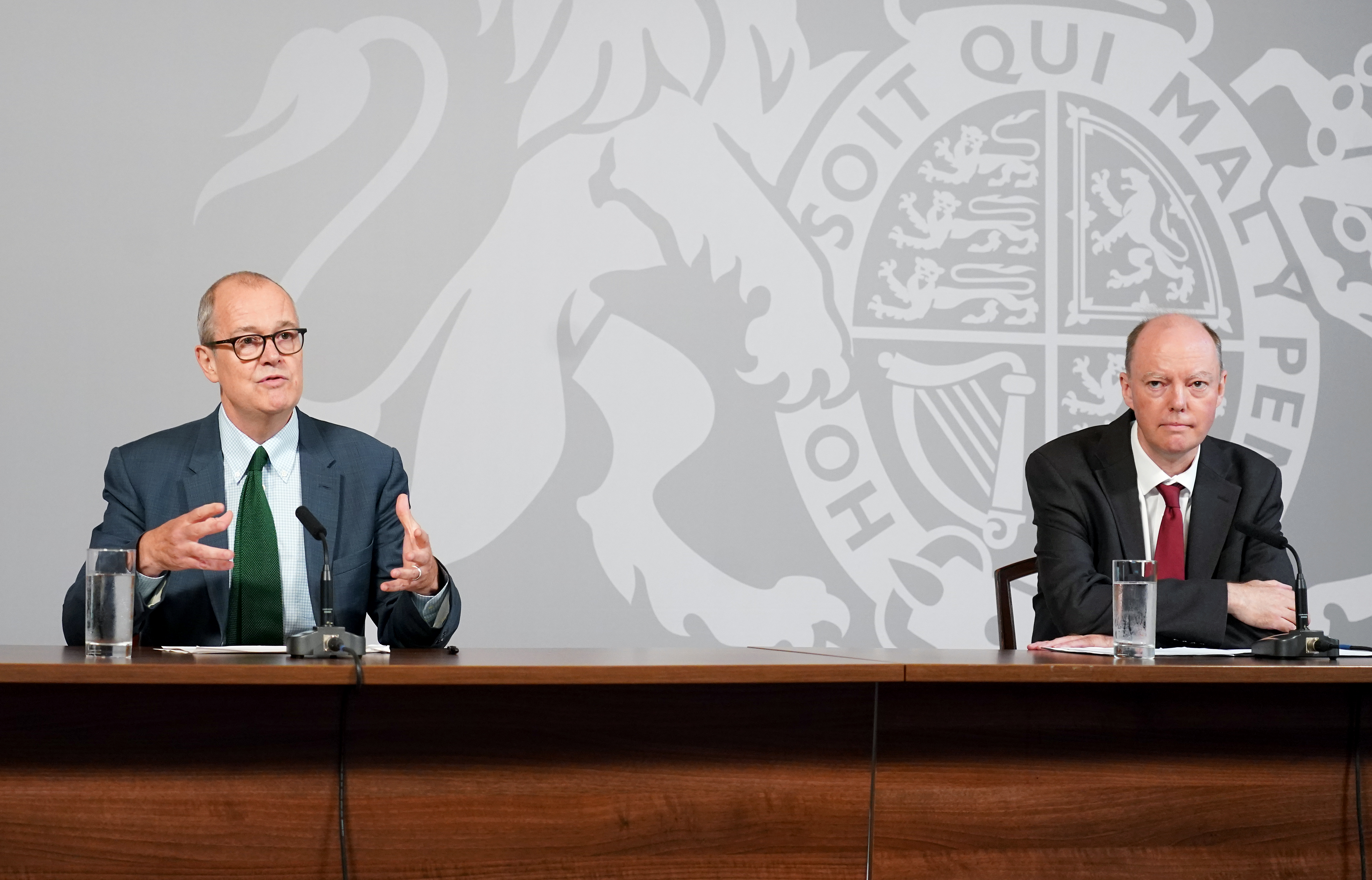 But the country's top scientists today issued a sombre warning after recent figures showed that cases have been doubling every seven days.

Sir Patrick Vallance, the Government's chief scientific adviser, said that without interventions, the UK could see 200 or more deaths per day by mid-November.

The "vast majority of the population remain susceptible" to catching coronavirus, he warned, adding that the current situation required swift action to bring the case numbers down.

He warned that if current infection rates continue, the UK could see around 50,000 cases a day by the middle of October.

It comes as ministers make final decisions on what national measures are needed to tackle rising cases, with Health Secretary Matt Hancock strongly hinting that separate households could be prevented from mixing.

Commenting on the raising on the UK's Covid alert level, Mr Hancock said: “It reflects the significant shift in the current threat posed by coronavirus.

“This country now faces a tipping point in its response and it is vital everybody plays their part now to stop the spread of the virus and protect lives."

In the first televised address alongside England's chief medical officer Professor Chris Whitty that was not attended by politicians, Sir Patrick said there was "no doubt" the UK was seeing increasing cases of Covid-19 among all age groups.

He said it was "not a prediction", but the current doubling of cases every seven days could lead to a dramatic rise in hospitalisations and deaths.

In mid-September, around 3,000 new cases were recorded every day in the UK, he said. 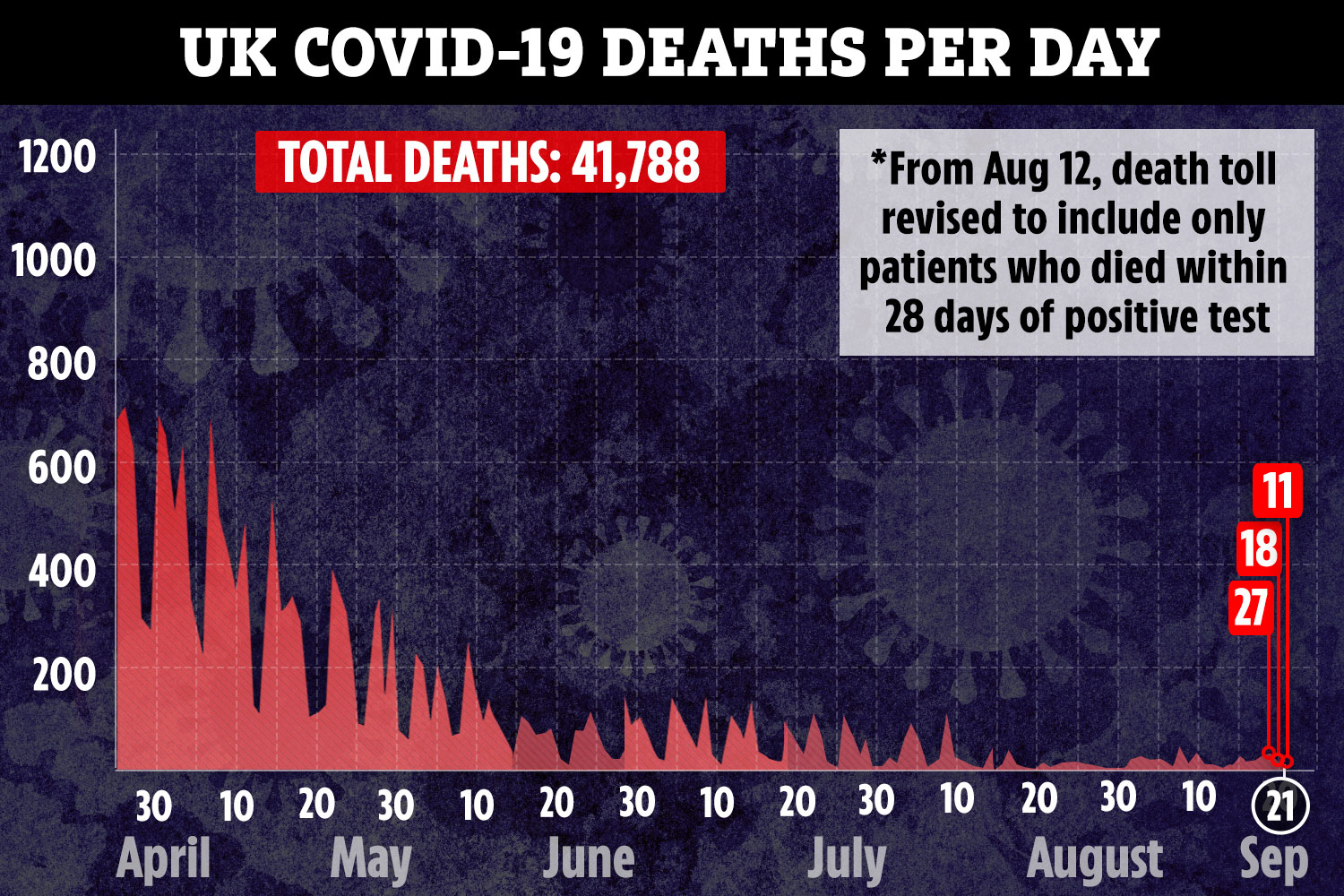 He said the "50,000 cases per day would be expected to lead a month later, so the middle of November, say, to 200-plus deaths per day.

"The challenge therefore is to make sure the doubling time does not stay at seven days."

Sir Patrick said it was not the case that the rise in coronavirus in the UK was down to more testing being carried out.

"Could that increase be due to increased testing? The answer is no. We see an increase in positivity of the tests done – so we see the proportion of people testing positive has increased, even if testing stays flat."

Prof Whitty hinted that curbs to social lives were needed to prevent coronavirus spiralling out of control, saying there was a need to "break unnecessary links" between households and a need to "change course".

He said there were four things to do – washing hands and using masks, quarantine measures, and investing in vaccines and drugs.

"The third one, and in many ways the most difficult, is that we have to break unnecessary links between households because that is the way in which this virus is transmitted," he said. 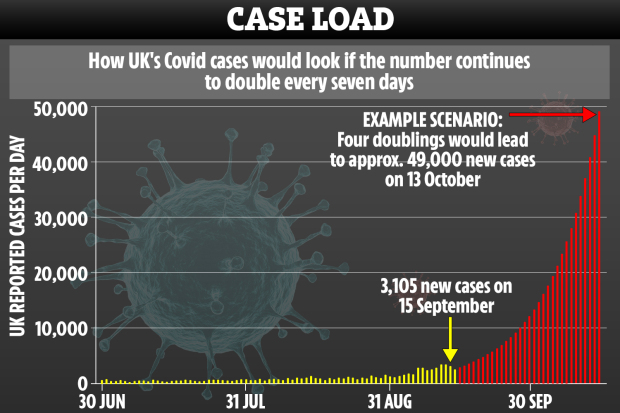 "And this means reducing social contacts whether they are at work, and this is where we have enormous gratitude to all the businesses for example who have worked so hard to make their environments Covid-secure to reduce the risk, and also in social environments.

"We all know we cannot do this without some significant downsides.

"This is a balance of risk between if we don't do enough the virus will take off – and at the moment that is the path we're clearly on – and if we do not change course we are going to find ourselves in a very difficult problem."

Prof Whitty warned the country should be braced for a tough winter, adding that colder months were known to benefit respiratory viruses.

"So we should see this as a six-month problem that we have to deal with collectively, it's not indefinite," he said.

Mortality rates from Covid-19 were "significantly greater" than seasonal flu, which killed around 7,000 annually or 20,000 in a bad year, he added.

He suggested that science would eventually "ride to our rescue" but "in this period of the next six months, I think we have to realise that we have to take this collectively, very seriously".

Prime Minister Boris Johnson, who will make a statement on Tuesday, spent the weekend with senior ministers and advisers discussing what steps should be taken next.

Mr Hancock said on Monday that final decisions were still being made but hinted at curbs to households socialising.

He told ITV's This Morning: "I think the main thing in terms of what we learnt is that where people catch the disease tends to be in social settings, people coming around to your house, or you going out and socialising essentially.

He said the Government was "determined" to keep schools open, adding: "The evidence is that schools aren't where a lot of transmission happens, it's more about people socialising."

Asked by presenter Phillip Schofield if people would be "locked down in our own homes socially", Mr Hancock said: "Well there are already parts of the country where, sadly, there are measures in place to say you shouldn't socialise with people in your household."

Mr Hancock said he wanted Christmas to be "as normal as possible", adding: "It depends how much we can control it now.

"If this runs out of control now, then we'll have to take heavier measures in the future.

"The more we can control it now by everybody doing that bit, including us – absolutely – but everybody together, then the easier it is going to be to have as normal a Christmas as possible."

On the possibility of a vaccine, Mr Hancock said: "For the mass rollout we're talking about the first bit of next year, if all goes well."

He said there was a chance it would "come on stream before Christmas" but said the most vulnerable – such as those in care homes and older age groups – would get it first.

Mr Hancock also dismissed as "completely overblown" reports of rifts within Government between himself and Chancellor Rishi Sunak over the response to coronavirus and whether health risks or the economy should be prioritised.

Areas in north-west England, West Yorkshire and the Midlands face further local restrictions from Tuesday, taking the number of people affected by increased local measures in the UK to around 13.5 million.

Meanwhile, Bridgend, Merthyr Tydfil, Newport and Blaenau Gwent will be placed under a local lockdown from 6pm on Tuesday following an increase in coronavirus cases, the Welsh Government announced.