Nearly two-thirds of coronavirus hospital patients are still suffering organ damage months after being discharged, a small study has warned.

Oxford University researchers found 60 per cent of patients had scarring or inflammation in their lungs three months after beating the virus.

The patients also showed signs of tissue changes in parts of their brain, and performed poorer in cognitive and physical tests.

Two-thirds suffered from persistent breathlessness and 55 per cent showed signs of mental and physical fatigue.

The study of 58 Covid-19 survivors adds to the growing concern about the health and wellbeing of people who manage to beat a bad bout of the disease.

As many as 60,000 people in the UK are thought to be suffering from so-called ‘Long Covid’, which the NHS officially recognised as a condition earlier this month and began drawing up guidelines for doctors on how to treat it.

Most people who contract Covid-19 will recover within a fortnight, suffering a fever, cough and losing their sense of smell or taste for several days.

The small number who are hospitalised are either elderly or have underlying health conditions – including heart disease, diabetes and asthma.

For this reason, the team at Oxford said it’s ‘difficult to know’ how much of the damage seen in patients’ organs was ‘pre-existing and how much has been caused by Covid-19’. 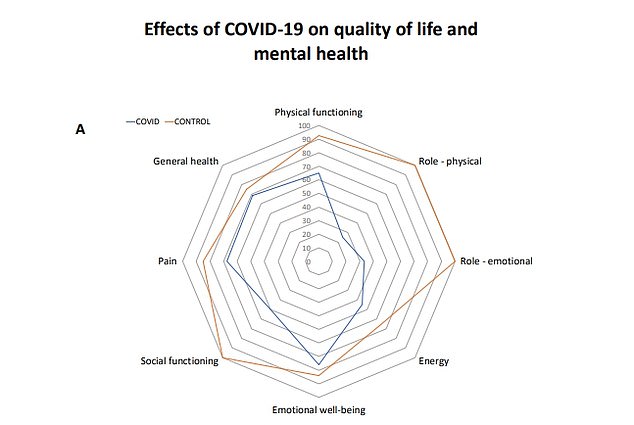 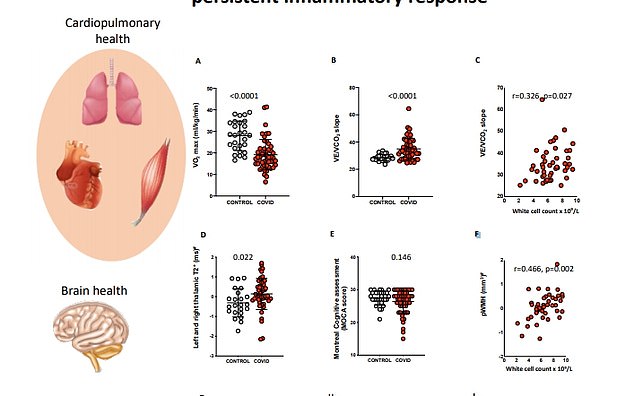 Diagrams show a comparison of heart and lung function in Covid-19 survivors. Exercise tests in diagram A and B compare how efficient the organs were at getting oxygen around the body. Diagram C shows the white blood cell count in survivors versus a control

Initial findings from the study, called C-MORE, have been published online as a pre-print on the website MedRxiv. It means the research has not been peer-reviewed by independent scientists.

The study looked at 58 patients with moderate to severe laboratory-confirmed Covid-19, who had been admitted for treatment at the Oxford University Hospitals NHS Foundation Trust between March and May 2020.

Most coronavirus patients will recover within a fortnight, suffering a fever, cough and losing their sense of smell or taste for several days.

However, evidence is beginning to show that the tell-tale symptoms of the virus can persist for weeks on end in ‘long haulers’ — the term for patients plagued by lasting complications.

Data from the COVID Symptom Study app, by King’s College London and health company Zoe, suggests one in ten people may still have symptoms after three weeks, and some may suffer for months.

For those with more severe disease, Italian researchers who tracked 143 people who had been hospitalised with the disease found almost 90 per cent still had symptoms including fatigue two months after first falling unwell.

The most common complaints were fatigue, a shortness of breath and joint pain – all of which were reported during their battle with the illness.

Another study in Italy showed one in ten people who lose their sense of taste and smell with the coronavirus – now recognised as a key sign of the infection – may not get it back within a month.

The study, published in the journal JAMA Otolaryngology – Head and Neck Surgery, involved 187 Italians who had the virus but who were not ill enough to be admitted to hospital.

The UK’s Chief Medical Officer Professor Chris Whitty has said the longer term impacts of Covid-19 on health ‘may be significant’.

Support groups such as Long Covid have popped up online for those who ‘have suspected Covid-19 and your experience doesn’t follow the textbook symptoms or recovery time’.

It also recruited 30 uninfected controls from the community.

Participants had MRI scans of their brain, lungs, heart, liver and kidneys, as well as multiple fitness tests and mental and cognitive assessments.

The study also found that patients were more likely to report symptoms of anxiety and depression, and a significant impairment in their quality of life compared to the controls.

‘Whilst we have found abnormalities in multiple organs, it is difficult to know how much of this was pre-existing and how much has been caused by Covid-19.

‘However, it is interesting to see that the abnormalities detected on MRI and exercise capacity in patients strongly correlated with serum markers of inflammation.

‘This suggests a potential link between chronic inflammation and ongoing organ damage among survivors.’

Dr Raman, a clinical research fellow at the Radcliffe Department of Medicine at Oxford, added: ‘These findings underscore the need to further explore the physiological processes associated with Covid-19 and to develop a holistic, integrated model of clinical care for our patients after they have been discharged from hospital.

‘We would like to thank all our patients and their families who have taken part in this study. In helping us to better understand the effects of this new disease, they have made an important contribution in helping others who have contracted – and who will contract – the virus.’

It comes after the NHS announced it will officially recognise ‘Long Covid’ on October 5.

NHS watchdog the National Institute for Health and Care Excellence (NICE) said it will work with doctors to draw up guidance on how to help patients who are suffering from Long Covid.

The move means the illness will be officially written into NHS paperwork and doctors will be given concrete advice about the condition.

It is not yet clear how medics will be instructed to recognise or treat the condition because people have such a wide range of symptoms. It is also not clear why it develops, but it appears to be most common among women of working age.

‘There is growing evidence to suggest Covid-19 is a multi-system disease that for many people involves persistent symptoms with longer term impacts on their health,’ said Paul Chrisp, NICE’s director of guidelines.

‘It is important, therefore, that people requiring ongoing support and treatment are identified quickly and are supported by the NHS throughout every stage of their journey.

‘We also want to ensure that clinicians have clear guidance on how best to support patients struggling with this newly emerging disease.’

The Scottish Intercollegiate Guidelines Network (SIGN) will also work with NICE and the NHS to set up the same system north of the border.

Both bodies have been ordered by NHS England to define Long Covid and write the guidelines for doctors.

They will have the help of the Royal College of General Practitioners, which represents more than 50,000 family doctors across the UK.

Together, the experts will come up with an official definition for Long Covid and educate doctors and other medics on how to spot the symptoms of it.

They will also produce advice on how to investigate the condition and suggest ways of treating the symptoms it can cause.

The guidance is expected by the end of the year.