In his forthcoming book, Trump's former lawyer Michael Cohen cites the video as an example of the commander-in-chief's obsessive hatred of Obama. 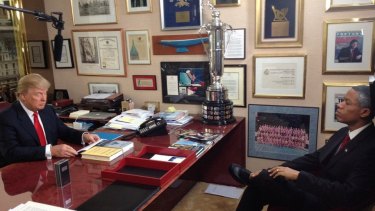 Before becoming president, Donald Trump allegedly hired a Barack Obama impersonator to participate in a video, according to a new book by Trump’s former attorney, Michael Cohen.

Trump hired a "Faux-Bama" to be in a video in which Trump "ritualistically belittled the first black president and then fired him," CNN quoted Cohen as relating in the book, set to be released Tuesday.

In 2013, right-wing outlet Breitbart published a video fitting Cohen's description. It was purportedly intended to air during the August 2012 Republican National Convention nominating Mitt Romney for president, but was eventually canceled.

In the video, which mimics the style of Trump's hit show The Apprentice, the Obama impersonator enters Trump Tower, where the current president grills him on his handling of the economy and other issues. The clip concludes with Trump saying his trademark line, "You're fired."

The Trump campaign did not immediately answer a request for comment.

The Slate article linked to a YouTube video posted in 2013. The Trump campaign did not immediately confirm whether the content is the same video Cohen describes in his book.