There is currently an impassioned public discussion that the "right" Aboriginal people haven’t been consulted in relation to the Western Highway duplication project and that proper process was not followed. This is untrue.

To say that it is diminishes the power and importance of the representative and inclusive structures
that Aboriginal people have fought so tirelessly for.

In Victoria, registered Aboriginal parties manage and protect cultural heritage on their country. These groups are appointed by the Victorian Aboriginal Heritage Council, an independent body of traditional owners. 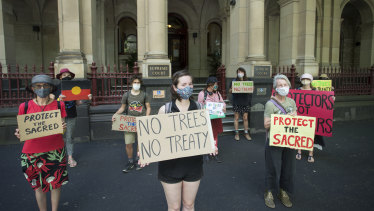 Activists outside the Supreme Court of Victoria protesting against the removal of the Djab Wurrung trees. The court is hearing the case for a second injunction to protect the trees. Credit:Paul Jeffers

Our work at the council is informed not just through our representation but in the quality we bring to a discussion. In and of ourselves, we challenge the presentation of an exclusionist, coloniser perspective. Council members connect heart with mind and bring to decisions what they believe as traditional owners and living embodiment of the oldest living culture on Earth.

Through a rigorous decision-making process, the council found that the Eastern Maar Aboriginal Corporation speak for the country between Ararat and Buangor, which includes the Djab Wurrung trees and landscape.

The corporation speaks for the Eastern Maar Peoples through an inclusive and representative structure and as the knowledge holders of their people’s cultural associations, connectivity and traditions on this country.

They are the authentic representative traditional owner
group for the area. We must respect their decision and their voice.

Continued engagement with non-representative groups undermines these traditional owner representative structures. The right process has been followed, and through that process, the
representative voice has been heard.

Of great concern to us, as Aboriginal people and Victorian traditional owners, is that the voice of the Eastern Maar Aboriginal Corporation is not being respected in the public conversation. What is more confusing and heart-breaking is that they are being attacked, both publicly and privately, by non-traditional owner "allies". 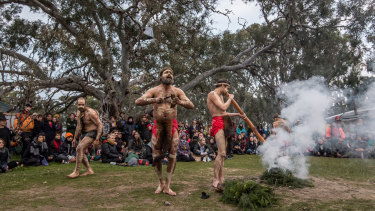 Protesters at the Djab Wurrung Embassy Camp set up 14 months ago to block the removal of the trees to make way for the expansion of the Western Highway.Credit:Justin McManus

I feel a sense of progress when I see non-Aboriginal people advocating for Aboriginal rights in this
state but, due to a lack of understanding of Aboriginal community business, thissupport is sometimes misplaced.

Non-Aboriginal Victorians have no right to dictate how Aboriginal communities organise their internal affairs and have no right to attack Aboriginal people on this. These are fundamental rights, defined in the United Nations Declaration of the Rights of Indigenous Peoples, that should be accorded all first peoples.

Our community, like all communities, can often disagree. And this is OK, lively debate is a sign of a
good democracy.

Advocacy through hate is not welcomed. Attacking members of the Aboriginal community for fighting for their people is undoing the hard work and dedication of our mob to fight for our rights since official colonisation. We must move past paternalism and allow Aboriginal people to speak for their culture and their country.

To our allies, I do not want to deter you from your advocacy. Our future is a path we must walk
together, side by side. Our cultural heritage is best understood through demonstrating respect for
traditional owners – our knowledge, our skills, our appreciation of our heritage. The practising of our culture and traditions makes us stronger and this strength offers all Victorians opportunities to value, understand and celebrate the unique cultural heritage we care for on behalf of all of us.

For our people, as custodians of the oldest living culture on Earth, we have an ancient lineal
connection to country, to culture and to each other. As traditional owners we have both inherited
and created cultural heritage. We create artefacts and materials, live traditions and spirituality, and
embed it all within the landscape. That is our culture. 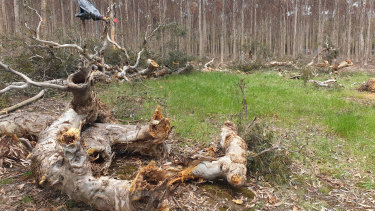 The Directions tree in the Djab Wurrung area was cut down last month as part of the widening of the Western highway.

Victoria has the strongest cultural heritage laws in the country. We’re the only state in Australia
where traditional owners have the final say in decision-making about the recognition and protection
of their cultural heritage. There is no ministerial override. And nor should there be. We have these laws because our people, Aboriginal people, have fought since colonisation to preserve culture and country.

Let’s respect this generational changing work of our ancestors.

Rodney Carter is the chairperson of the Victorian Aboriginal Heritage Council.

Related posts:
World News:
Schizophrenic woman not guilty of stabbing girl, 7, to death in park
Rapist, 20, is jailed after claiming woman raped him
Pregnant mom Amethyst Killian was 'stabbed 20 times in face and stomach' as online lover charged with murder
Woman who slit seven-year-old girl's throat in park on Mother's Day found not guilty of murder
Recent News:
This website uses cookies to improve your user experience and to provide you with advertisements that are relevant to your interests. By continuing to browse the site you are agreeing to our use of cookies.Ok