Washington: Georgia's Republican top election official says the White House had pushed him against his better judgment to take a call from President Donald Trump in which he pressured the state to overturn his November presidential election defeat there.

In the call on Saturday, Trump told Georgia Secretary of State Brad Raffensperger to “find” enough votes to overturn his election loss in the southern state, according to a recording published by US media. 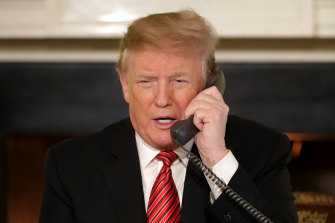 "I never believed it was appropriate to speak to the President but he pushed out, I guess he had his staff push us. They wanted a call," Georgia Secretary of State Brad Raffensperger told ABC's Good Morning America.

A state Democrat has called for a probe into whether Trump had violated Georgia election law on the call. Raffensperger and his office's general counsel rejected Trump's assertions of electoral fraud in the hour-long conversation.

"But I do want to make my points that the data that he has is just plain wrong. He had hundreds and hundreds of people he said that were dead that voted. We found two. That's an example of just his bad data." 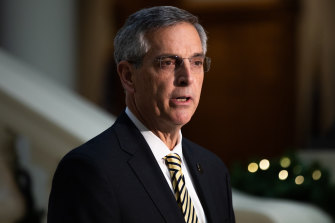 Brad Raffensperger says he was pressured to take a call from Trump.Credit:Bloomberg

Trump for two months has been claiming contrary to evidence that his loss to Democratic President-elect Joe Biden was the result of widespread fraud. Multiple state and federal reviews, as well as courts, have rejected those claims as unsupported..

Biden won the state-by-state Electoral College by 306-232 and carried the popular vote by more than 7 million ballots.

The only Democrat on Georgia's election board, David Worley, asked Raffensperger to investigate whether the President had violated state law that prohibits solicitation to commit election fraud.

"To say that I am troubled by President Trump's attempt to manipulate the votes of Georgians would be an understatement," Worley wrote on Sunday in a letter to Raffensperger that was seen by Reuters.

Raffensperger said the district attorney in Fulton County, home to Atlanta, might be the appropriate authority to carry out such an investigation. The county's district attorney, Fani Willis, did not immediately return a request for comment.

In another blow to Trump, staunch conservative US Senator Tom Cotton refused to sign on to a long-shot campaign by nearly a dozen other fellow Republicans in the US Senate this week to challenge Biden's victory, warning it was outside of Congress' power and would "establish unwise precedents".

In a statement on Sunday, Cotton said he would not join his colleagues Ted Cruz, Josh Hawley and others in defying Republican Party leaders by objecting on January 6 when politicians meet to tally the votes in the Electoral College – a largely symbolic act of certification.

Cotton noted that limited, symbolic role in his statement, saying any such refusal to carry out its duty "would take away the power to choose the president from the people, which would essentially end presidential elections and place that power in the hands of whichever party controls Congress".

Cotton, Cruz and Hawley are among those considered possible 2024 presidential candidates. Trump, who has not conceded defeat, has also floated the idea of running again in 2024.

Several moderate Republicans have also joined Democrats in criticizing Cruz, Hawley and others for undermining the of the voters and planning to object – a move they say will not succeed in installing Trump but will erode confidence in US democracy.

It was not immediately clear how the release of Trump's call with Raffensperger could impact the Republicans' objection plan.

"This call was not a helpful call," Republican US Senator Marsha Blackburn, who is among those planning to object to the certification, told Fox News in an interview on Monday.

House of Representatives Republican Leader Kevin McCarthy defended Trump's call in an interview with Fox News on Monday. "The President's always been concerned about the integrity of the election, and the President believes that there are things that happened in Georgia that he wants to see accountability for," McCarthy said.

Senate Republican Leader Mitch McConnell has publicly acknowledged Biden's win. US Vice-President Mike Pence, who will oversee the January 6 proceedings, has said the Republicans have the right to object.

Even if Republicans in the Senate were successful in their objections, the campaign would fail in the US House, which is controlled by Democrats.

Related posts:
World News:
Washington state officially begins human composting
Seal pup found in Southend river after making 500-mile journey
New building materials watchdog following Grenfell fire inquiry
The Love Island feuds that unfolded off-screen from steamy secret sex rows to violent late night bust ups
Recent News:
This website uses cookies to improve your user experience and to provide you with advertisements that are relevant to your interests. By continuing to browse the site you are agreeing to our use of cookies.Ok