Beirut: Three people have been stung to death and more than 450 injured after heavy rains washed scorpions into the streets in the Egyptian city of Aswan over the weekend.

Thunderstorms and hail swept scorpions and snakes out of their natural habitats and into homes.

The extreme weather also caused powercuts, and brought down street lamps and trees. Doctors have been pulled away from administering coronavirus vaccinations and recalled from holidays to deal with the number of scorpion sting admissions, local media reported. 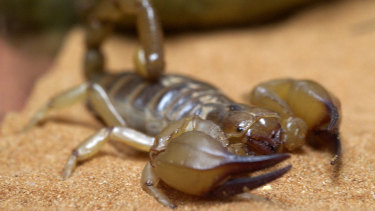 Schools have been ordered to close to protect children and residents have been urged to stay at home and away from trees that could continue to fall.

A health official told Al Ahram news agency: “Extra anti-venom doses are currently being distributed to medical-centres in the villages near mountains and deserts.”

Egypt’s Meteorological Authority has said it expects rainfall to continue for the coming days over parts of South Sinai and southern Egypt.

Ahmed Rizk from the Agricultural Research Centre in Giza told Al Watan newspaper that it was normal for heavy rains to wash scorpions and snakes away from their nests, forcing them to find new places to hide. The professor urged residents who live in mountainous areas to seek shelter elsewhere when the downpours start.

He also advised people that if stung, they should “tie a piece of cloth firmly near the bite to inhibit the venom from reaching the heart”.

While many scorpion stings will not be fatal, Egypt is home to some of the most deadly fat-tailed scorpions in the world, the venom of which can kill a fully-grown adult in less than an hour if no anti-venom is administered as a matter of urgency.

Videos posted on social media show heavy hailstones beating down as the arachnids battle against them, trying to cross the threshold of a front door.

All of those injured by the scorpion stings have been hospitalised and are receiving treatment, Ehab Hanafy, the undersecretary for Aswan’s health ministry told Al Ahram.