Three gangsters have been jailed for more than 37 years after violently stealing Rolex watches worth up to £25,000 each by following victims’ cars for up to 150 miles.

A woman in her 50s was followed almost 100 miles from a meeting in east London to her home village of Hingham, Norfolk, and violently mugged when she stopped to buy chips.

Freddie Aguis, 29, and Shane Johnson, 30, were each given extended sentences of 16 years at Norwich Crown Court for robbing the woman and two other men.

Aguis of Hackney, east London, will have to spend 14 years behind bars and Johnson of no fixed address must serve 13 years after being described by a judge as a danger to the public. 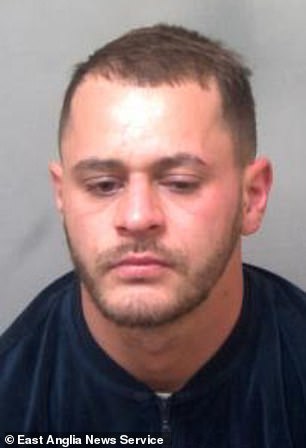 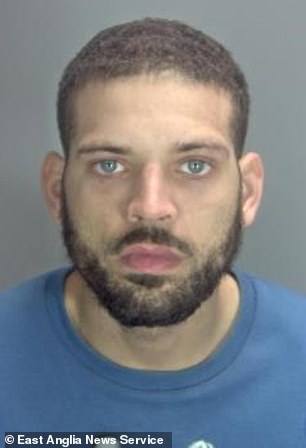 Freddie Aguis (left) , 29, and Shane Johnson (right), 30, were each given extended sentences of 16 years at Norwich Crown Court for robbing the woman and two other men

The pair had initially denied the offences, but changed their pleas to guilty after the start of their trial last year revealed ‘compelling evidence’ against them.

John Weaver, 35, from Hackney, who earlier pleaded guilty to the robbery at Hingham was jailed for five and a half years.

Police believe that lone motorists were targeted after gang members pulled alongside them in traffic and saw them wearing their watches.

Victims were followed for up to 150 miles on motorways and country roads so they could be attacked and robbed when they arrived home.

The woman from Hingham thought she would die as she was grabbed from behind and forced to the ground with a hand put over her mouth so she could not breathe.

The victim was left with severe bruising after her watch was wrenched from her wrist and rings pulled from her fingers. Her red Mercedes car and handbag containing personal items were also stolen on the evening of March 13, 2019. 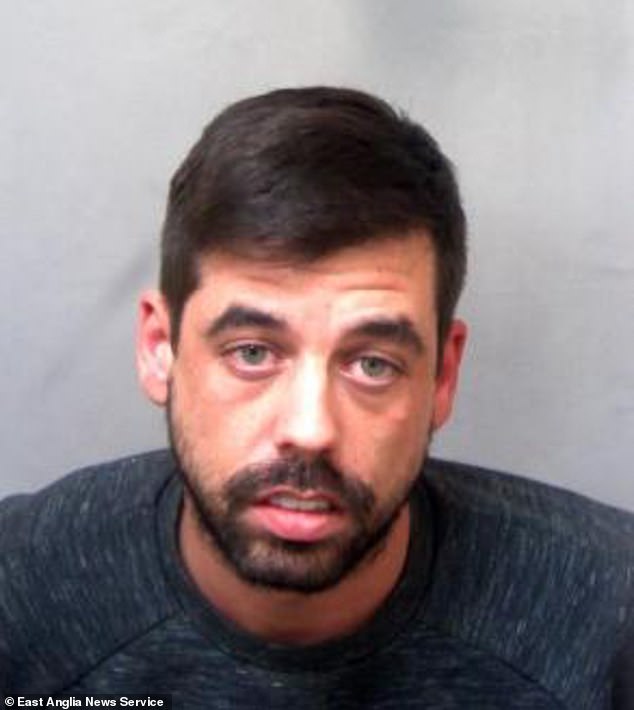 John Weaver, 35, from Hackney, who earlier pleaded guilty to the robbery at Hingham was jailed for five and a half years

Judge Katharine Moore said the three robberies had ‘a profound effect on the victims both physically and psychologically’.

A second victim of Aguis and Johnson was driving home from a restaurant when he realised he was being followed by a blue Audi saloon car.

Three men ran towards him shouting at him to take off his watch at around 11pm on March 29, 2019 after he stopped outside his home in Loughton, Essex.

The victim tried to run and was struck by the Audi which was driven into him. He managed to carry on running and was hit twice on the head with an extendable baton.

He handed over his watch which cost £25,000 when new, but was then hit a third time.

Aguis and Johnson struck again on the same night in the early hours of March 30 when they followed a man 150 miles from east London to his family home in Belbroughton, Worcestershire.

The victim had just parked outside his house when three men scaled electric gates on his driveway and attacked him.

He had a hand put over his mouth as he called his mother for help and was forced to hand over his Rolex worth £20,000, before being hit ‘gratuitously’ on the leg with a metal baseball bat. 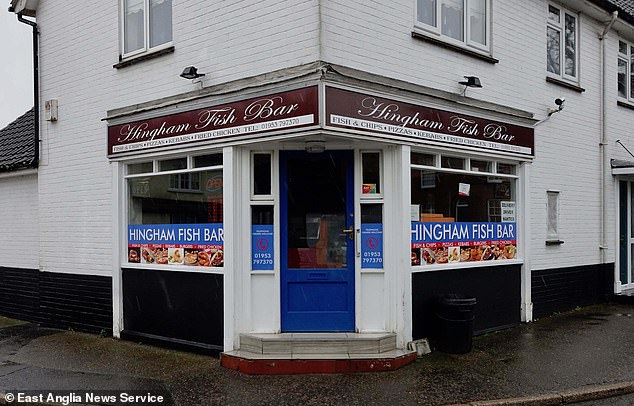 A woman in her 50s was followed almost 100 miles from a meeting in east London to her home village of Hingham, Norfolk, and violently mugged when she stopped to buy chips at the Hingham Fish Bar (pictured)

The gang was finally brought to justice after trying to steal the Mercedes from their victim in Norfolk.

They initially hid the car near Hingham, and returned to London in their Audi Q3 before driving back to Norfolk later in the night with false number plates to fix on the Mercedes, so it would not be picked up by police cameras,

Police later spotted the Mercedes and the Audi being driven in convoy down the A11 in south Norfolk in the early hours of the following morning.

Officers managed to stop the Mercedes being driven by a hired driver, but failed to pull over the Audi which got away.

A fingerprint from Aguis was found on a false number plate fitted to the Mercedes, while Johnson’s fingerprint was on the tape used to fix it in place.

Johnson’s DNA was also found on sunglasses recovered from the scene of the robbery in Worcestershire.

Two Audis which had been fitted with false number plates were also seized.

Evidence from automatic number plate recognition cameras proved that the cars had been used in the robberies.

Aguis was linked after records for his mobile phone showed he had been following the three victims.

He was also seen driving both cars on earlier occasions, and his fingerprints were found on a cigarette packet in one of them while Johnson’s fingerprint was on a Fanta bottle in the same car.

Aguis was found after his arrest with a phone containing ‘numerous photographs’ of expensive watches, particularly Rolexes, including some that he was wearing.

Dominic Bell, defending Aguis, said that he had acted as a driver in the robberies.

John Lucas, for Johnson, said that he had been ‘just a yes man’ and not involved in any planning.

Detective Sergeant Scott Malcolmson of Norfolk Police said the victim in Hingham was ‘still paying the price of her ordeal.’

He added: ‘She was just buying shopping and getting back to her car when three men approached, one man grabbed her, holding his hand over her mouth as they stole her possessions. This has had a long-lasting impact on her life.

‘The police take such crimes very seriously. We understand they can be incredibly distressing and impact on some victims for life. We will always make sure we pursue these types of crime and turn over every stone to bring offenders to justice.’

The woman from Hingham said in a victim impact statement that she had been left ‘living in fear’ and would have considered suicide were it not for supportive family and friends.

She condemned her attackers as ‘evil and cruel’ and urged them to take steps to return some of her personal items if they had ‘a spark of decency’.

The woman added: ‘You see dreadful things on the news and crime dramas but when it is for real you cannot believe how humans can be so appalling – and for what? How would they feel if it happened to somebody they loved?

‘They nearly suffocated me. I was out of breath. I thought I was going to die.’

The victim claimed that her stolen jewellery had only recently been left to her after the death of her mother.