This month marks the 30th anniversary of the final report of the Royal Commission into Aboriginal Deaths in Custody. This, combined with the fact that there were four Aboriginal deaths in custody last March and another one more recently, makes it timely to examine the issue again.

It is very controversial, but unnecessarily so. The Guardian recently referred to it as “this festering crisis”. If March was a typical month for Aboriginal deaths in custody, then maybe concerns would be justified, but there is not yet evidence this is the case.

Let’s set the record straight. Yes, any death in custody is sad, but the reality is people die. Whether they are in custody or not, Aboriginal or not, people die. The Australian Institute of Criminology, reporting in 2019 on the first 25 years since the royal commission, found the majority of prison deaths for Aboriginal prisoners were due to natural causes. 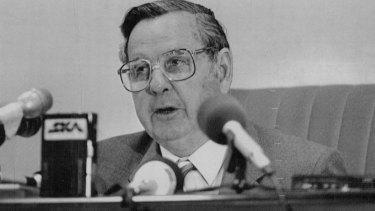 Justice James Muirhead at the opening of the royal commission into the deaths of Aboriginals in custody, January 27, 1988.Credit:Source Unknown

The next highest group was due to hanging, and investigations must get to the bottom of suggestions that two of the recent deaths in custody occurred when prisoners found hanging points in their cells: the commission recommended the removal of all hanging points. 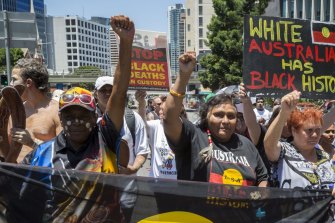 Demonstrators gather to protest the deaths of indigenous Australians in custody.Credit:Glenn Hunt/Getty Images

The Australian Institute of Criminology publication states that the same remains true today. “Indigenous people are now less likely than non-Indigenous people to die in custody, largely due to a decrease in the death rate of Indigenous prisoners from 1999–2000 to 2005–06. ”

However, these objective facts have not stopped some Aboriginal leaders from portraying an alternative narrative.

For example, Senator Patrick Dodson was reported in The Australian newspaper as saying that “Aboriginal people are frustrated to the back teeth about the number of deaths that are occurring.” That may be true for the circles in which Senator Dodson moves in, but in my circle of associates – those who want truth and genuinely care for Aboriginal Australians – we are sick to the eyeballs of each Aboriginal death in custody being cited as evidence of racism against Aboriginal people.

For example, in April, Greens senator Lidia Thorpe stated: “At this point, you have to say, the system is deeply racist.” In regard to one death, while crying, she stated: “And we are still trying to survive in this country and they are killing us in the prison system.” Senator Thorpe does not provide any evidence for this claim. For people whose starting point is “Australia has entrenched racism”, no evidence is needed as confirmation bias is activated.

I agree with Senator Dodson when he stated that immediate action was required to address Indigenous incarceration rates that had “blown out to glory” in the past three decades, now standing at 1995 people per 100,000 adults compared with 166 per 100,000 adults for non-Indigenous Australians.

There are certain actions that can be taken to reduce incarceration rates. However, simply diverting Aboriginal people from prison will only likely change where they die, given their poorer health status. In The Australian in 2015, a senior officer with more than 20 years’ experience in regional watch houses stated that the complex health problems of many Aboriginal people, even young ones, should terrify police who are required to care for them.

An upstream approach that prevents Aboriginal people from coming into contact with the criminal system is the best solution and is a win for all.

To ensure Aboriginal people are less likely to come into contact with the criminal justice system, and hence less likely to die in custody, requires an approach that ensures Aboriginal Australians have access to the same sorts of opportunities and care that most Australians take for granted. This can largely be achieved by ensuring that adults have meaningful employment and that the children receive a quality education that prepares them for real citizenship. This also promotes physical and mental health.

Finally, something from the Royal Commission into Aboriginal Deaths in Custody report rarely mentioned, is: “There is no other way. Only the Aboriginal people can, in the final analysis, assure their own future.” That does not mean Aboriginal people go it alone, as Aboriginal affairs is everyone’s business, but they must play a crucial part. Let’s work together. Honest reporting on Aboriginal deaths in custody would be a good start.

Anthony Dillon is a postdoctoral fellow at the Australian Catholic University.

Opinion takes on the week’s most debated topics with views that will challenge, champion and inform your own. Sign up to receive it every Thursday.