The Nazi surrender through German eyes: Images show defeated soldiers marching into captivity, others caged at a ZOO and Hitler days before he killed himself in final months of WW2

There are images of beleaguered of German PoWs marching to their surrender and what may be one of the last photos of Hitler alive.

The Fuhrer can be seen shaking hands with members of the Hitler Youth in late April 1945, days before he committed suicide in his bunker. 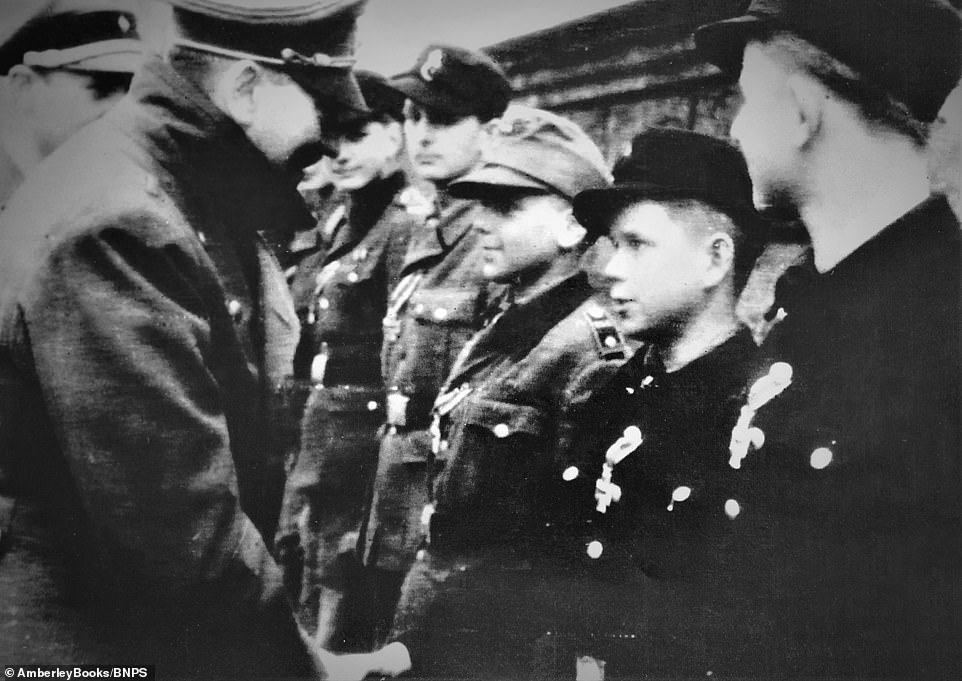 In one of the last known photos of Hitler, taken on April 20, 1945, the Nazi leader can be seen greeting Hitler Youth members days before his suicide 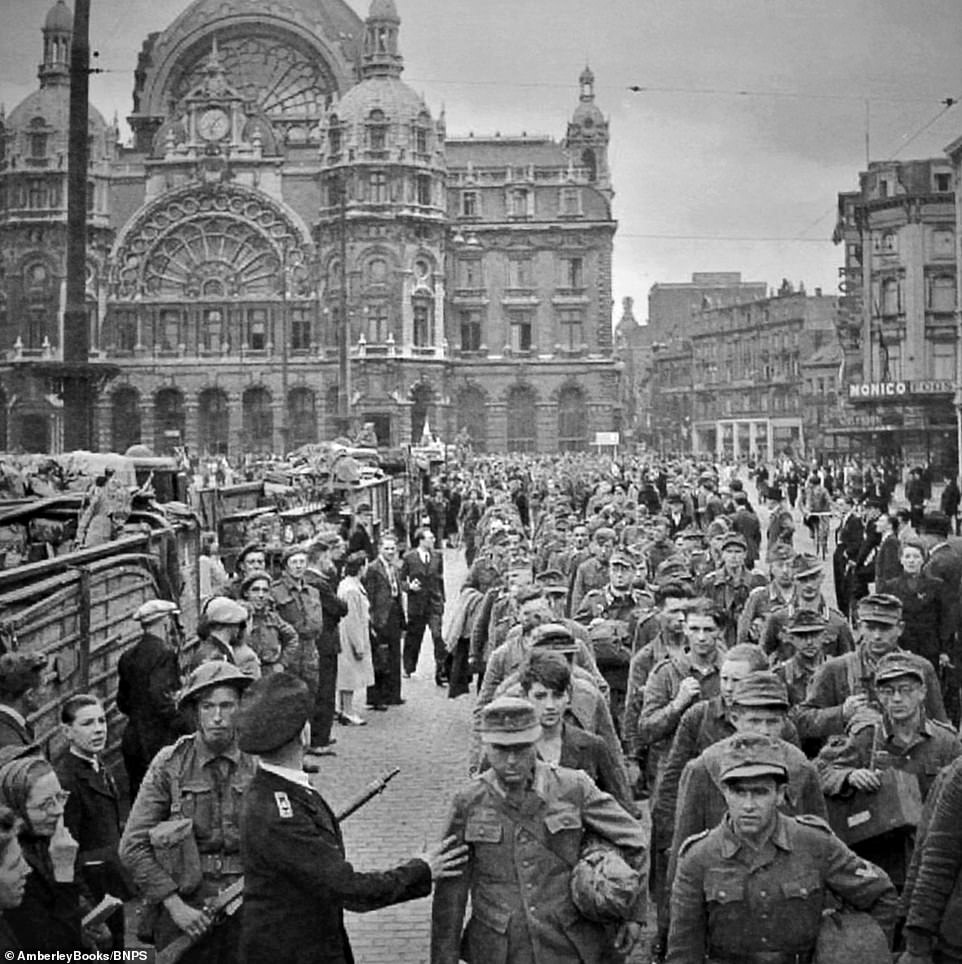 75 years after VE Day the end of the Second World War, never-before-seen images have come to light in a new book. This picture shows German prisoners of war marching to surrender 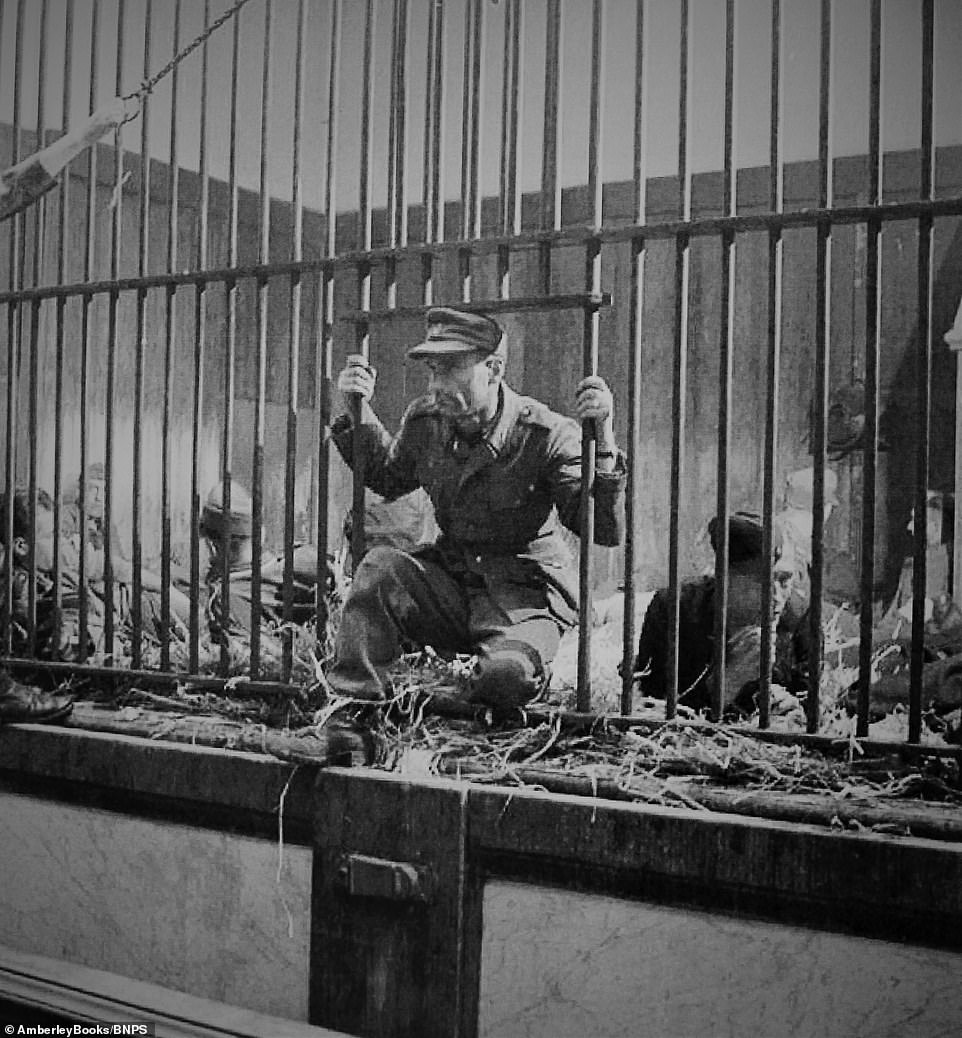 Along with local collaborators, on their surrender many hundreds of Antwerp’s German garrison were temporarily held in the cages of the city’s zoo 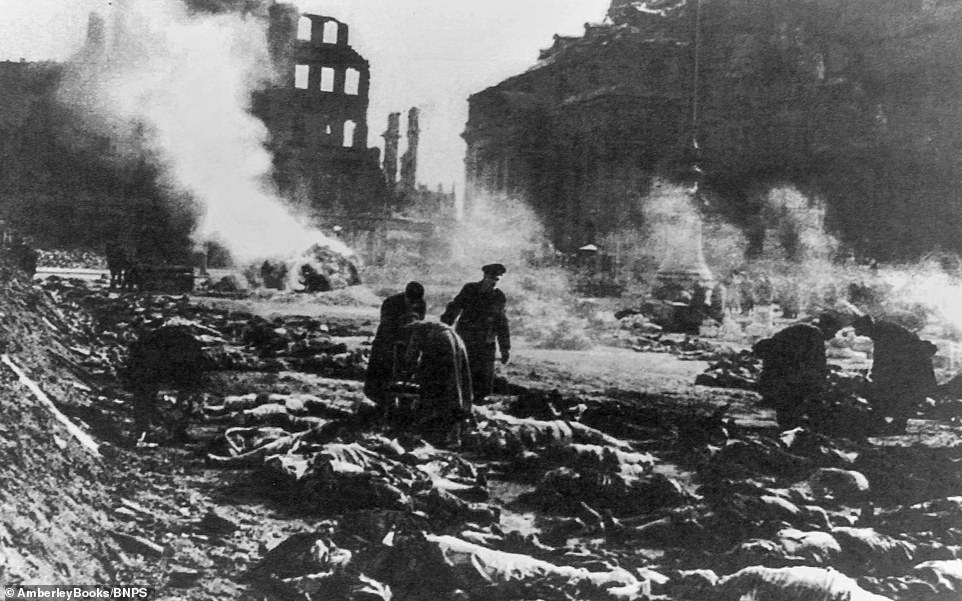 Germans recover bodies after bombing in Dresden. The city was completely destroyed by Allied bombers. RAF and US Air Force planes dropped over 2,500 tonnes of bombs on the city over a three day period

Other harrowing images show the devastation of the Allied bombing raids as German cities were turned to rubble.

The haunting images have been published in historian Jonathan Trigg’s new book, To VE Day Through German Eyes.

In the final months of the war, Germany found itself under attack on both sides, with the Allies approaching from the West and the Russians from the East. 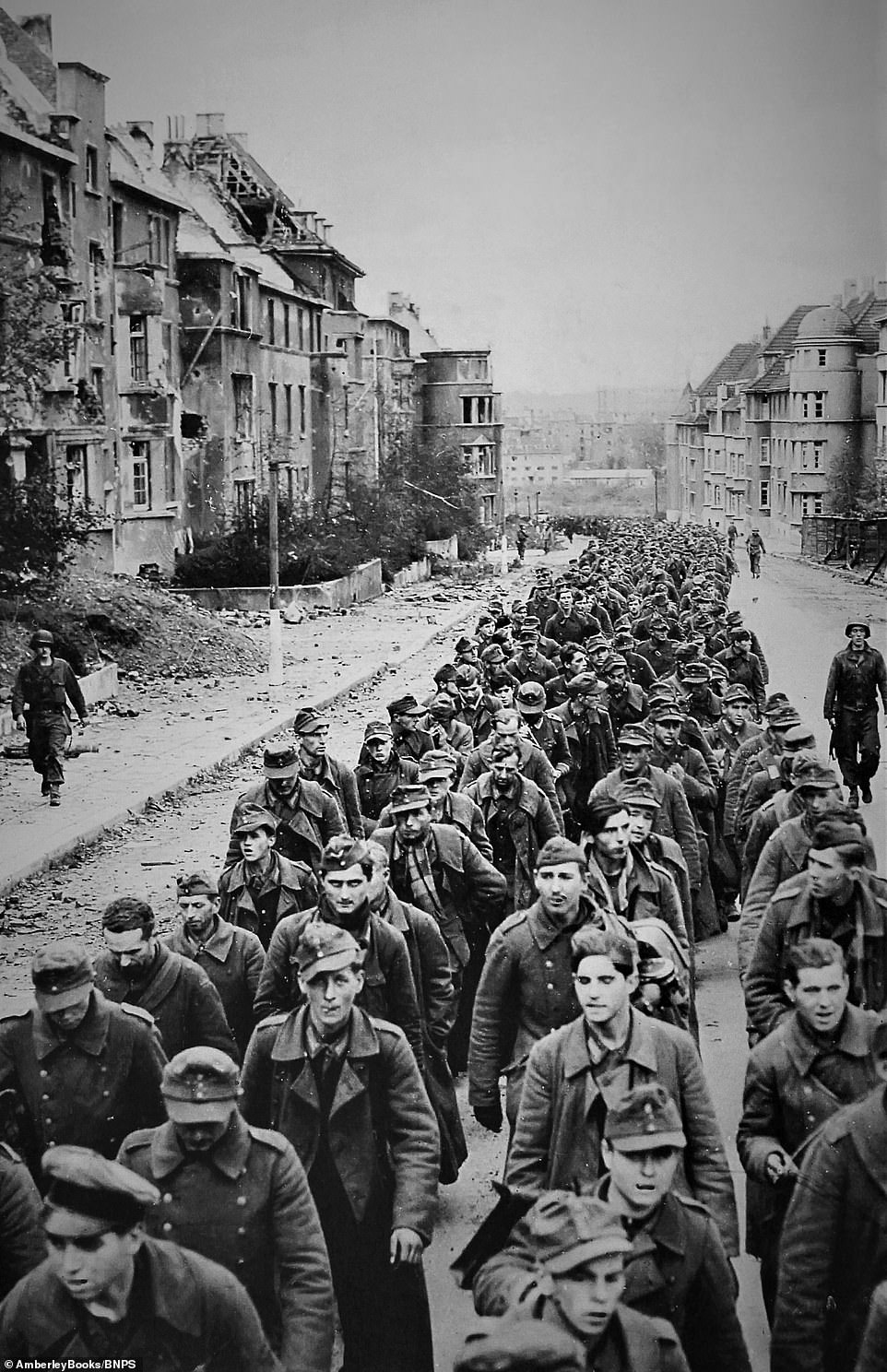 German POWs march through Aachen in Germany to surrender. The long line of soldiers queuing to surrender goes around the street and out of sight as despondent looking troops knowingly walk to their imprisonment

It was hoped the war would be over by Christmas 1944, but they managed to stave off final defeat until May the following year.

One photo shows Major General Allan Adair, the commander of the British Guards Armoured Division, saluting the cheering crowds from the turret of his Cromwell tank as Brussels was liberated on September 4, 1944.

Another captures the other side of the equation, as thousands of Germans march into captivity.

There is a photo of a German garrison in Antwerp with local collaborators being temporarily held in the cages of the Belgian city’s zoo. 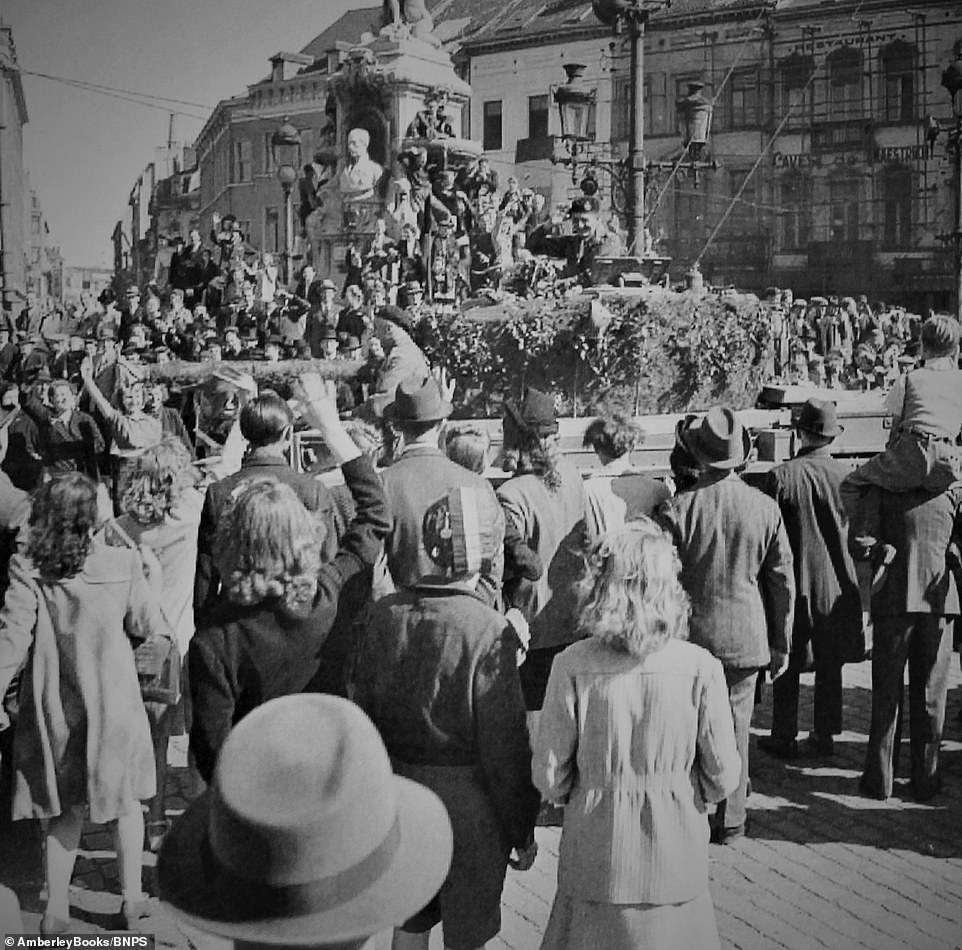 Major General Allan Adair, the commander of the British Guards Armoured Division, salutes the cheering crowds from the turret of his Cromwell tank in Brussels, which was liberated on September 4, 1944 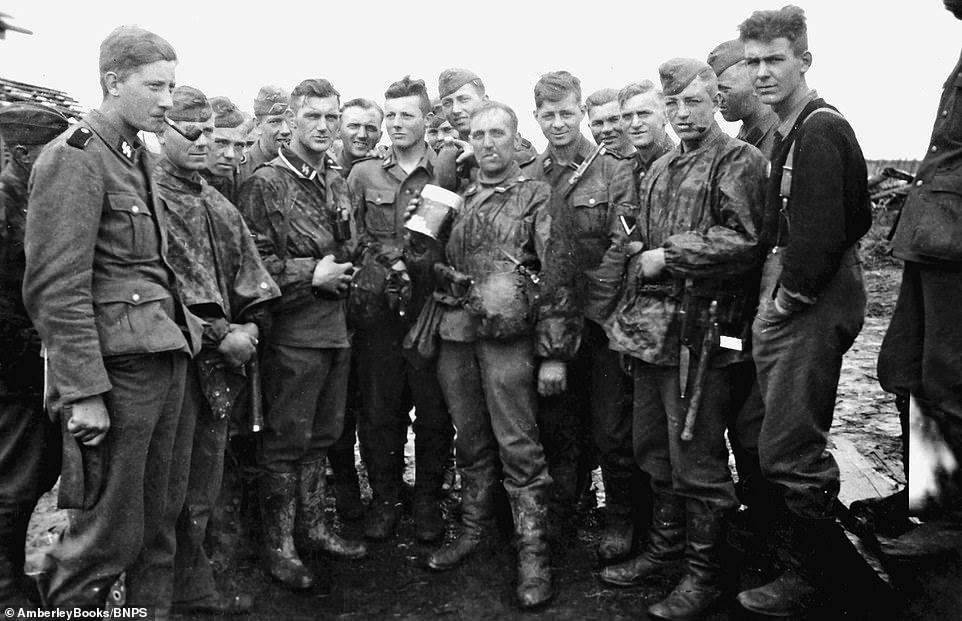 Wounded SS men (Schutzstaffel), Hitler’s paramilitary organisation, pose for the camera while recovering from the fighting

German fighters are shown advancing through woodland during the first days of the doomed Ardennes offensive, the last major German attack of the war.

Young Estonian Waffen-SS volunteers have also been pictured, many of whom would have been killed as the merciless Red Army advanced.

At the other end of the age spectrum, an elderly man fires a panzerfaust (anti-tank weapon) during hurried training in the spring of 1945 for the final defence of Berlin.

The German ranks were so depleted anyone who could hold a weapon was pressed into action.

The flattened remains of Wesel, Dresden and Hamburg are documented, as well as a destroyed oil refinery as supplies were cut to the Third Reich. 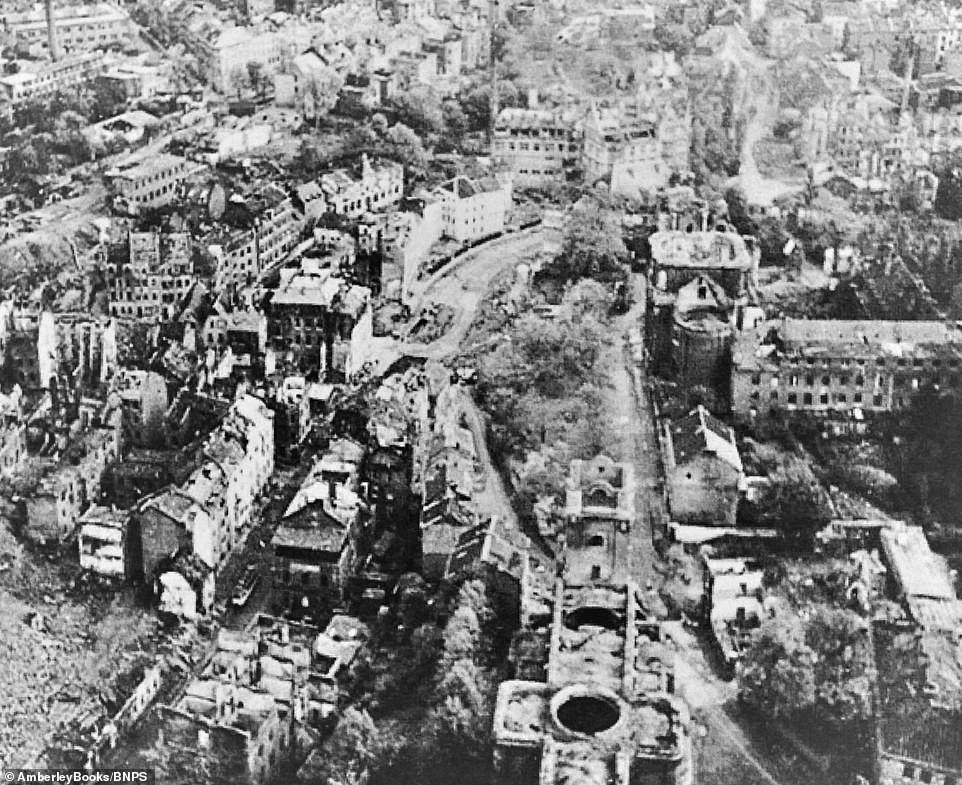 Aachen in Germany reduced to rubble after intense fighting. Empty shells of buildings can be seen across the whole city, while the streets are devoid of life. This was a common sight in German towns which were overwhelmed by fighting in the last weeks and months of the Second World War 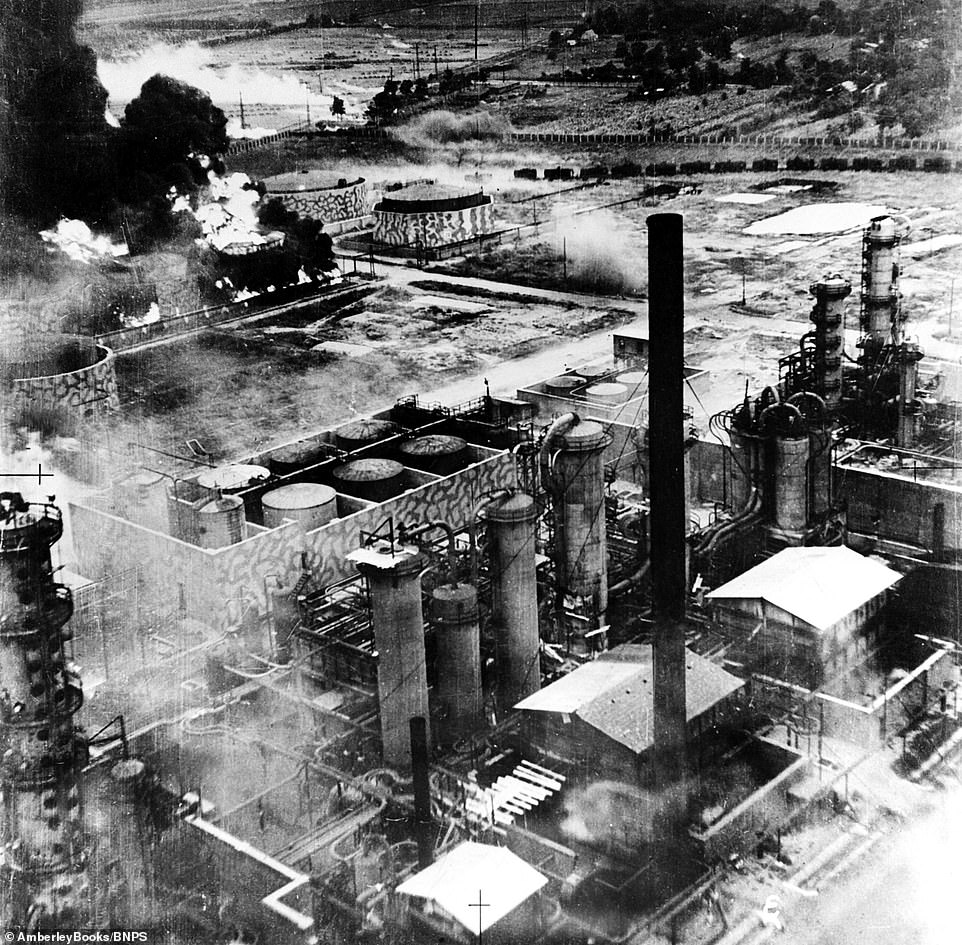 A German oil refinery burns after being set alight by Allied forces. Fires can be seen coming out of silos at the top of the picture, while the whole area is covered in smoke

A photo taken on April 20, 1945, shows Hitler greeting Hitler Youth members in the chancellery garden, many of whom had received bravery awards for fighting the Soviets.

It was Hitler’s 56th birthday and one of his last public appearances before he took his own life 10 days later. Germany unconditionally surrended on May 8, 1945.

At least 250,000 German troops were killed every month in the last five months of the conflict, and a million men didn’t make it home as they perished to starvation and inhumane treatment in the East.

In addition, around 600,000 German civilians died during the Allies’ wartime raids on Germany – compared to 43,000 Brits in the Blitz. 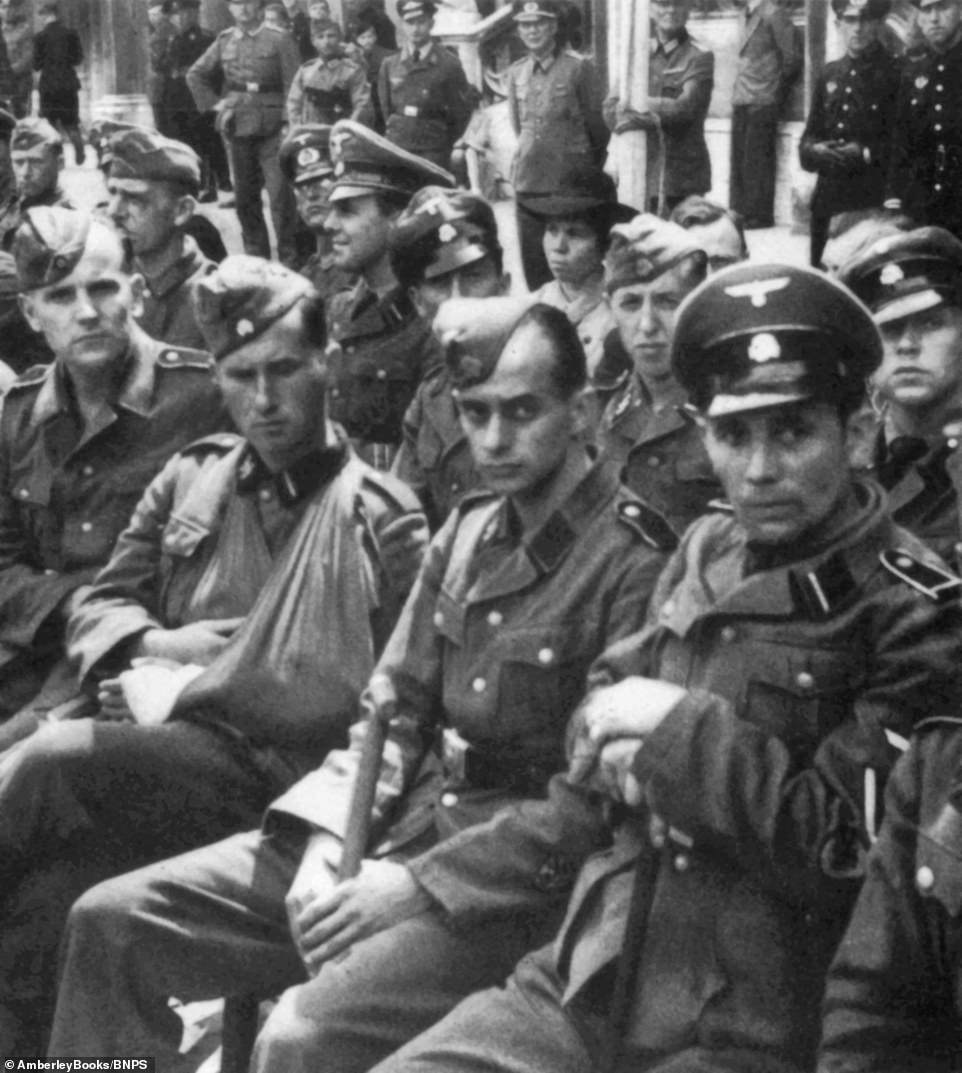 French Waffen SS volunteers. An estimated 7,000 to 11,000 men served in the unit at its peak in 1944, which was made up on French volunteers fighting for the German forces

Many of the photos in the book – some of which are previously unpublished – were provided to Mr Trigg by German veterans he has interviewed in the past two decades.

Mr Trigg, 49, a former soldier, from Sheffield, said: ‘Nazi Germany, caught in a vice between the forces of the western Allies and the Soviets, was finally defeated in a maelstrom of violence that left the continent traumatised.

‘Hardly an acre of land or a single home in Europe was left untouched by the war, with hundreds of millions of people suffering extraordinary hardship and grief.

‘I wanted to give the view from the foxhole and the soldier sitting in it, often up to his knees in mud and water as he froze and suffered through what seemed interminable months before it was all finally over. 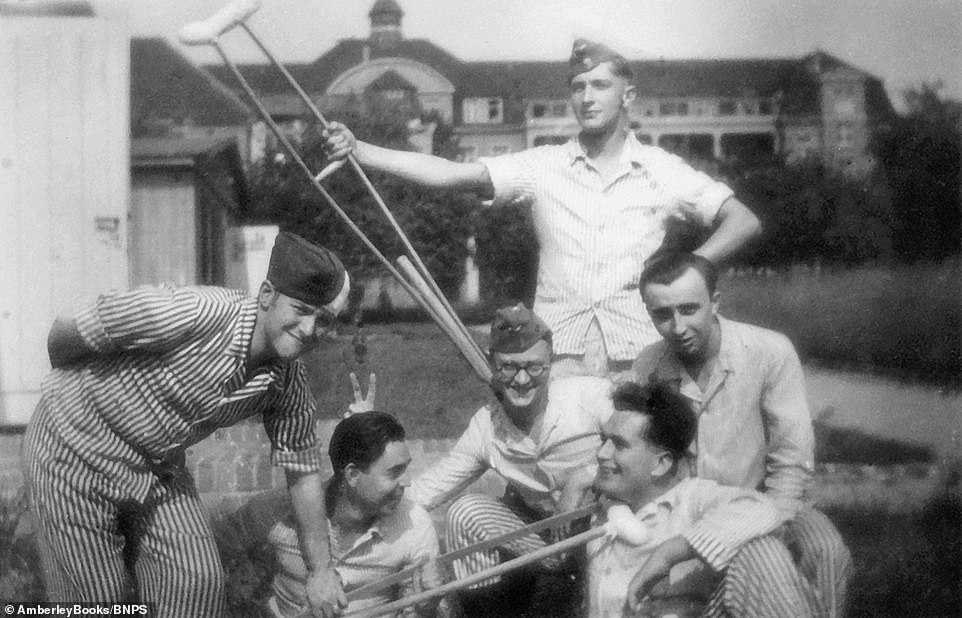 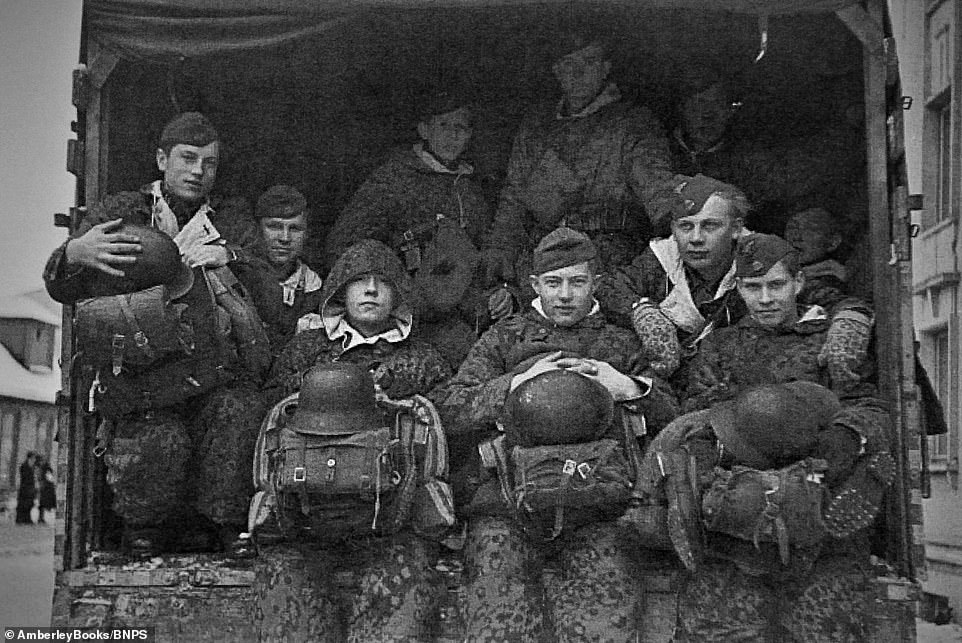 These young Estonian Waffen-SS volunteers were thrown into the fighting in the last months of fighting. Most would not survive

‘I can’t imagine how horrific it would have been for the ordinary German pilots and infantrymen in the last months of the war. They ran out of equipment, ammunition and fuel and were outmatched in all facets.

‘The Nazi goverment was so horrendous they sent young boys and old men to fight with hardly any training or weaponry. They were lambs to the slaughter, with tens of thousands killed.

‘One million men didn’t make it back to Germany following the war. They had behaved so barbarically in the Soviet Union that they knew what was coming in return.

‘The majority perished through starvation and ill-treatment. Hitler was the biggest coward of all, exalting his men to fight to the bitter end but taking his own life.’

To VE Day Through German Eyes, by Jonathan Trigg, is published by Amberley Books on April 15.

The final push to defeat Adolf Hitler: How D-Day began the chain of events that led to the end of WWII

Waged across every inhabited continent, the Second World War was the most costly conflict in history, claiming the lives of around 57 million people.

By 1944, the tide was turning against the Nazis, particularly after the successful D-Day landings of June that year.

Following Germany’s defeat during the Battle of the Bulge in January 1945, the surviving troops limped back to the Rhine to defend the frontier. They were eventually dislodged by a major Allied attack involving a million men.

This is a timetable of the main events:

June 4: Rome falls to the Allies.

June 6: D-Day invasion begins on the beaches of Normandy in the famous Operation Overlord.

August 20: Battle of Normandy ends with the closing of the Falaise Pocket. Advance to the River Seine begins.

September 17-26: Operation Market Garden, the “Bridge Too Far” airborne mission to cross the Rhine at Arnhem, fails with the loss of around 18,000 Allies.

December 16: German offensive in the Ardennes region launches Battle of the Bulge.

January 27: Auschwitz concentration camp is liberated by Russian troops and the full horrors of Nazi Germany and the Holocaust slowly emerge.

January 28: The final shots are fired in the Battle of the Bulge, giving victory to the Allies, but at a heavy cost in men and equipment.

March 23 to 24: A million Allied troops cross the Rhine during Operation Plunder.

April 30: With Soviet troops marching on the Reich Chancellory in the heart of Berlin, Hitler commits suicide in his Berlin Fuhrerbunker – shooting himself in the head as he bites on a cyanide pill.

May 1: Hitler’s propaganda minister Joseph Goebbels and his wife kill themselves.

May 2: German forces in Italy surrender.

May 4: Montgomery receives surrender of German forces in Holland, north-west Germany and Denmark on the Luneberg Heath.

May 8: Victory in Europe Day (VE Day) as Admiral Karl Donitz, appointed President by Hitler before his death, unconditionally surrenders.

August 6: “Little Boy” atomic bomb is dropped on Hiroshima by US B-29 bomber Enola Gay.

August 14: Emperor Hirohito announces unconditional surrender of Japan and papers are signed on board the USS Missouri in Tokyo Bay.

August 15: Victory over Japan Day (VJ Day), or VP Day (Victory in the Pacific) is celebrated.