I recall the committee of a very traditional, exclusive, English gentleman’s club being challenged by a formal written request from an ageing member to be allowed to dine with his wife on occasions in The Club. After a considerable number of weeks of “due consideration”, the committee posted the following on the notice board (words to the effect):

“The Committee has decided that it would be appropriate for Members to dine with their wives in the Main Dining Room, between the hours of noon and 2pm, every second Tuesday.” 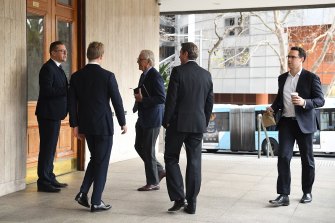 Men arrive at the men’s only Australian Club for the vote on whether to allow women as permanent members.Credit:Kate Geraghty

This solicited a response from another, somewhat younger member requesting, again in writing, permission to dine with his mistress on occasions in The Club. This caused the committee somewhat greater difficulty but, after many more weeks of “due consideration”, it posted the following on the notice board (again, words to the effect): “The Committee has decided that it would be appropriate for Members to dine with their mistress in the Main Dining Room, between the hours of noon and 2pm, every second Tuesday, PROVIDED their mistress was married to a Member of the Club.”

I also recall a personal experience when staying in an exclusive gentleman’s club on Pall Mall in London some two decades ago. My colleague and I had started the day with a significant run. Rushing to grab breakfast before our first appointment, we showered quickly and entered the dining room, still sweating in our suits and ties. As we took our seats, we sought to hang our jackets on the backs of our chairs. The maître d’ accosted us, advising we must keep our jackets on to be able to be served breakfast. It didn’t matter that we were the only two in the dining room. Nor that a painting of reclining female nude dominated the dining room wall, though I did point this out.

With this background, I wasn’t surprised when a special general meeting of the men-only Australian Club this week – “to consider a special resolution for the purpose of amending the Club’s Constitution to allow women to be Members” – reported that following “record turn-out of Members … the meeting determined that the 75 per cent threshold to pass the resolution was not met”. Indeed, it is reported that a mere 37 per cent voted for the resolution, 62 per cent against, with 1 abstention.

As I had decided earlier in the year to let my membership lapse, I wasn’t eligible to vote. If I had been, I would have voted for the resolution. Now there are calls for members to quit in protest. If I were still a member, I’d be joining those heading for the exit door.

But the decision to block women is, of course, quite legal. Clubs have a right to set their purpose and conditions of membership. There are also exclusive women’s clubs – I have spoken at some – as well as many limited membership religious, ethnic, sporting and other clubs.

However, gentlemen’s clubs have long been – and are becoming ever more so – an anachronism, inconsistent with evolving social norms. I imagine some of the Australian Club’s senior members – especially leaders from business, politics, and civil society – would be propagating their commitment to gender equity policies and practices in their daily activities. This vote should have been, and no doubt was for those in the minority, an opportunity to demonstrate leadership on the issue.

Under-representation of women, across the board, has worked significantly against our national interest. Far too many decisions have been dominated by “men in suits”. For too long women were absent from the discussion, or had too little influence, when men committed the nation to various wars, to decisions about welfare and family support, education and health, child and aged care, ethnic and indigenous affairs.

But now we are well into the 21sty century. Women – like it or not, old chaps – are leading businesses and running boardrooms. So are Asians, by thy way, and yet the club’s own minutes cite, among members’ concerns, the prospect of Asians joining their ranks.

Not all members are so backward, of course, but the danger is that such a closed institution becomes a breeding ground for bigots, sexists and misogynists.

Members continue to defend such grand old clubs an important gathering place for “doing business”. But not, it seems, with a woman who does business. In the year 2021, an overwhelming majority of the gents of the Australian Club would prefer not to be exposed to that kind of influence.

John Hewson is a professor at the Crawford School of Public Policy, ANU, and a former Liberal opposition leader.