This is the dramatic moment kidnappers snatch a baby from its mothers arms as she walks along a crowded street in Guatemala.

The kidnapping took place in Zacapa, around 70 miles from the capital Guatemala City, on September 30.

Shocking CCTV footage shows the baby snatchers speed up to the mother and wrench the young baby boy from her during a violent struggle.

The men appear to be laying in wait for her in a side-street on a motorbike which they use as a getaway vehicle.

The passenger jumps off and snatches the baby while his accomplice gets ready to speed off.

The mother puts up a defensive fight, attempting to grab her baby back, but the man hits her and knocks her to the ground in the 25-second struggle. 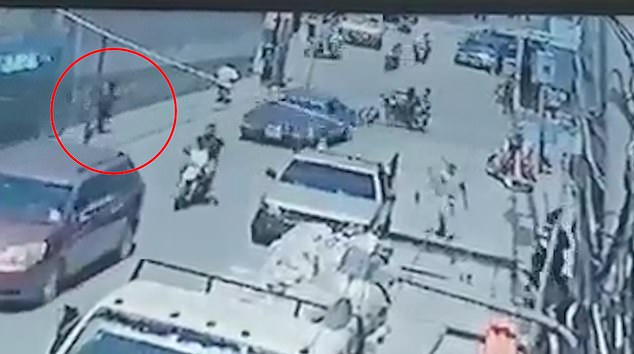 The mother is seen walking up the street holding her baby in Zacapa, Guatemala on Wednesday seconds before the kidnappers attack. The two men can be seen crossing the street towards her on a motorbike

A stray dog can be seen running up to the kidnappers and appears to try to intervene but none of the other by-standers who witnessed the abduction tried to stop it.

The neighbourhood where it had occurred has been named as Tamarindal.

Yesterday police confirmed they had recovered the young boy and reunited him with his parents.

The baby is said to have been found abandoned at a disused railway station shortly after the kidnapping. 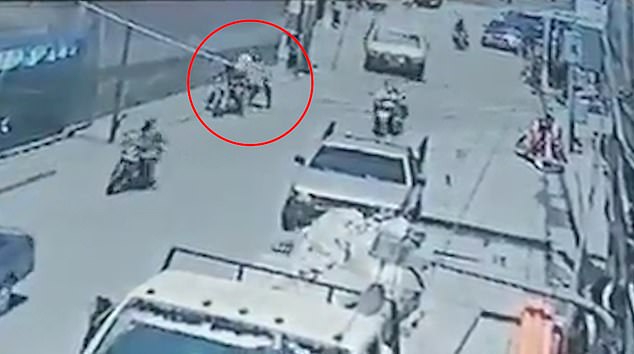 The reason the men snatched the child before abandoning it has not been revealed.

No arrests have yet been made.

He said street cameras in the area had played an instrumental part in enabling officers to find and save the youngster.

Police delivered clothes, nappies and food to the child’s family, described as a ‘low-income family’ once they were back at home.