Tech giants should pay news providers for content due to a fundamental imbalance of power, report finds – as UK sets up watchdog to curb their power

Online tech giants should pay news providers for using their content under a ‘mandatory’ code, peers have demanded in a landmark new report.

It paints a worrying picture of a ‘fundamental imbalance of power’ between news publishers and platforms.

This comes as Government announced plans for a new competition regime designed to rein in the dominance of platforms such as Google and Facebook.

This would force platforms to pay publishers for the right to use content.

The Australian proposals allow news publishers to ‘negotiate collectively’ with the internet giants.

Under this system if the two parties cannot reach a deal then an ‘independent arbitrator’ chooses which final offer is most fair.

Concerns have been raised that if any new code was not mandatory then Google and Facebook could refuse to take part.

The report also pointed to concerns about the way these dominant online platforms use their algorithms, with publishers concerned about the lack of warning they are given over changes.

There are also concerns about the way Google’s algorithms decided on search rankings with concerns that some publications are prioritised above others.

The Lord’s report said: ‘There is a fundamental imbalance of power between news publishers and platforms.

‘This includes whether and how much they pay for news appearing on their platform, which news sources their algorithms rank most highly and how much notice they give publishers of changes to these algorithms.’

It added: ‘Algorithms are a product of the human value judgments of their designers, but there is a lack of transparency about them and designers’ possible biases. We will examine this issue further in our next inquiry, on freedom of expression online.’

The report went on: ‘The Government should use the Online Harms Bill to legislate for a mandatory news bargaining code modelled on the Australian Competition and Consumer Commission’s proposal.

‘Once it is set up, the Digital Markets Unit should take on responsibility for this and keep un-der review publishers’ concerns about the ways in which platforms use their content.

‘The Government and regulators should work closely with international partners on this is-sue.’

The report told Government to take action on the ‘dysfunctional’ online ads market which is crippling news organisations.

Lord Gilbert of Panteg, chairman of the Communications and Digital Committee said: ‘Online advertising is crucial to news publishers’ success, but there’s a fundamental imbalance of pow-er between them and platforms such as Facebook and Google whose overwhelming market dominance means they dictate the terms on which they use publishers’ content, including whether and how much they pay for it.’

The Breaking News? The Future Of UK Journalism report also recommends more powers for Ofcom to regulate public service broadcasters’ online news content which is not currently covered under its remit, as well as ensuring they monitor the accuracy and impartiality of their journalists’ public social media posts.

Meanwhile, it said the BBC News website and app should include an aggregator section which links to stories on smaller and local news organisations’ websites.

UK watchdog is set to curb the power of Google, Facebook and other tech giants to prevent them abusing their dominant positions 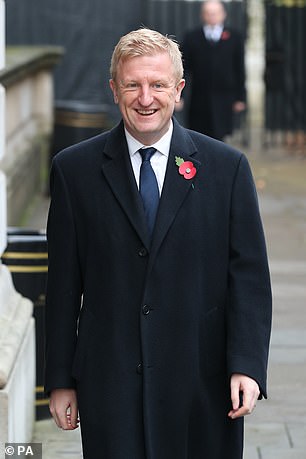 Britain is taking on Google, Facebook and other tech giants with the world’s first watchdog to prevent them abusing their dominant positions.

The Digital Markets Unit will be given muscular powers to protect smaller businesses and to ensure that consumers have more control over their online profiles.

While its precise remit has not been defined yet, it could be able to levy large fines to stop customers or companies being treated unfairly, and make leading online firms give smaller rivals access to their vast troves of data.

It may also have powers to suspend, block or even reverse decisions made by tech companies.

The unit, which starts work in April, is expected to become fully operational by 2022. Legislation allowing it to legally enforce its rulings is expected to be debated in Parliament’s next session.

It will be part of the Competition and Markets Authority (CMA), which has called for stronger powers after warning that Google and Facebook held ‘unassailable’ positions in digital advertising and social networking that threatened fair competition.

The two companies command 80 per cent of Britain’s £14billion digital ads market between them, the CMA found, while Google controls 90 per cent of the search market. But today, the Government will vow to address the regulator’s fears to ensure ‘consumers and small businesses aren’t disadvantaged’.

Ministers are particularly concerned that online platforms abuse their market dominance to impose unfair business terms on news publishers, threatening their ability to give the public high-quality news.

‘But there is growing consensus in the UK and abroad that the concentration of power among a small number of tech companies is curtailing growth of the sector, reducing innovation and having negative impacts on the people and businesses that rely on them.

‘It’s time to address that and unleash a new age of tech growth.’

‘Our new, pro-competition regime for digital markets will ensure consumers have choice, and mean smaller firms aren’t pushed out.’

In a report in July, the CMA warned that Facebook and Google had become so dominant over digital advertising that rivals could not ‘compete on an equal footing’.

The watchdog said vast amounts of data amassed by the firms gave them an ‘unmatchable’ and growing advantage over competitors, while both also constantly ‘nudge’ people towards their own services to gain control over yet more data.

In the case of advertising, it warned that this dominance could force businesses to pay more than they would have done if there was more competition. The CMA said this allowed Google and Facebook to take a bigger share of ad revenue from newspaper publishers, which rely on the tech giants to attract visitors to their websites, making it harder for them to survive.

Mr Dowden said a free Press was ‘the cornerstone of democracy’, adding: ‘As more and more news moves online, we want to make sure our world-renowned publishers get a fair deal from the tech platforms so we can help guarantee their long-term sustainability.’

Andrea Coscelli, CMA chief executive, said; ‘Only through a new pro-competition regulatory regime can we tackle the market power of tech giants like Facebook and Google and ensure that businesses and consumers are protected.’