The invasion that would make Ukraine look like a side show: As Taiwan conducts a full-scale rehearsal for an assault by China, MARK ALMOND warns the possibility is all too real… and terrifying

As the mournful wail of air-raid sirens rang out at 1.30pm yesterday, residents in towns and cities in Northern Taiwan retreated indoors. The streets rapidly cleared of people and cars.

In the capital Taipei, shops and restaurants pulled down their shutters and police directed vehicles to the side of the road and ordered drivers and their passengers to seek shelter.

The screech of fighter jets scrambling to repel the enemy filled the skies, while a ‘missile alert’ text was sent to hundreds of thousands of mobile phones, urging evacuation to a place of safety immediately.

Terrifying, yes, but the nightmare scenario that unfolded was a necessary full-scale drill to prepare for the day — drawing closer by the hour, according to some — when Taiwan is subject to a surprise attack from mainland China.

With the eyes of the world focused on the brutal war in Ukraine, we must not underestimate the crisis simmering at the other end of Eurasia, some 5,000 miles away. Nor are they unrelated. 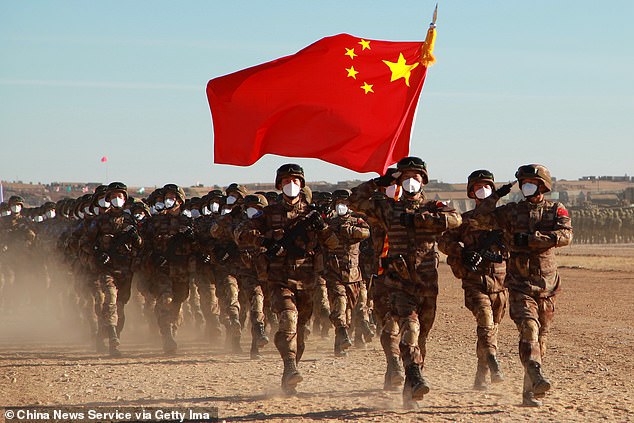 Taiwan conducted a full-scale rehearsal for an assault by China, as fears have risen following Russia’s invasion of Ukraine (pictured: Chinese troops on joint counterterrorism military exercise with Russia in 2021) 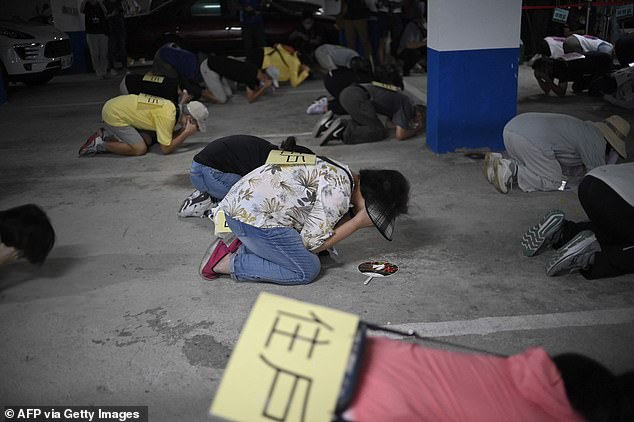 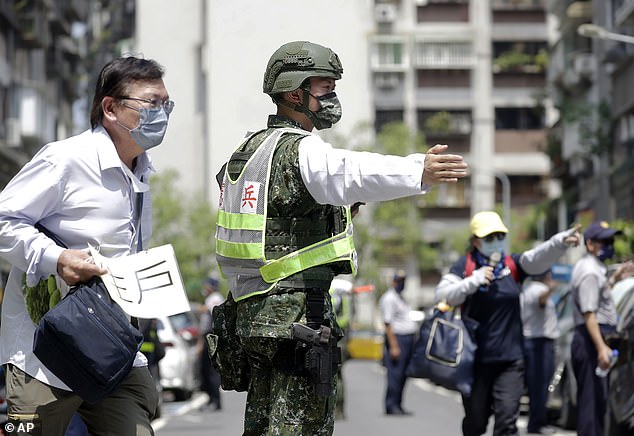 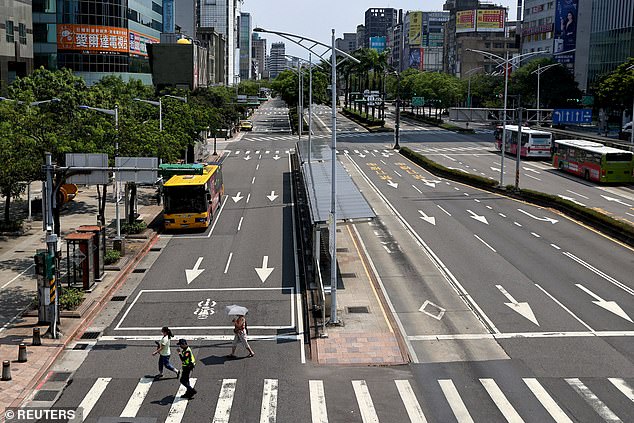 Taipei closed down during an annual 30 minute drill, which takes place in case of a surprise attack from China

Russia’s Vladimir Putin and China’s Xi Jinping share a common disdain for their weaker neighbours’ rights, and Taiwan has long felt the breath of the Chinese dragon on its throat.

Ever since the Communists came to power in mainland China in 1949, they have had this plucky little nation in their sights.

It is officially part of the Republic of China but, in reality, has been an independent democracy for more 30 years.

Just as Putin didn’t like a democratic Ukraine on Russia’s border, so having a Chinese-speaking democracy just 100 miles away is unacceptable to China’s all-powerful president, Xi.

Now, with China’s airforce and navy increasingly active around and over Taiwan, all the signs are that he is rehearsing an invasion of this tiny but geopolitically important island, with a population of just 29 million people (compared with 1.4 billion in China).

On a visit to Japan in May, President Joe Biden made it clear that the U.S. would be prepared to defend Taiwan if attacked. And, of course, no one would be happier to see that than Putin.

Diverting American forces and high-tech weapons to the Far East from Eastern Europe would take the pressure off him in Ukraine.

But a Chinese invasion of Taiwan could quickly escalate far beyond the Ukraine conflict to become the greatest threat to world peace since the Cuban Missile Crisis in 1962.

So how might such an invasion unfold? What would trigger it? And how would it impact the rest of the world?

The most likely ‘excuse’ for an invasion would be a declaration of independence by the Taiwanese president, Tsai Ing-wen.

Short of that, any recognition of Taiwan as a nation independent of China by the West, would fan the flames. (Indeed, following reports of a proposed visit by U.S. politician Nancy Pelosi last week, the Chinese warned that their response could involve ‘forceful measures’.)

Taiwan, a thriving freemarket economy driven by industrial manufacturing and exports of electronics and machinery, has grown rich outside Communist China. But until quite recently, it neglected defence spending.

With a relatively small number of trained troops and modern weapons, it has relied instead on its strategic value — at the junction of the East and South China Seas in the North-West Pacific — to the Americans and Japanese to guarantee its protection. But learning from Putin’s failure to capture the Ukrainian capital, Kyiv — with an airborne assault of a few thousand troops at the end of February — Beijing may well conclude that only a massive shock-and-awe attack on Taiwan would work. 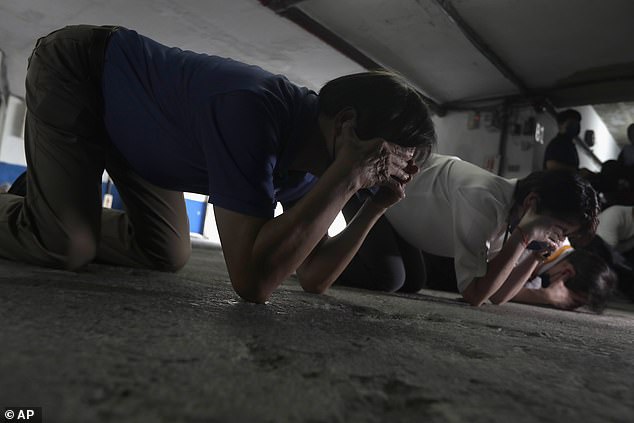 A rainstorm of ballistic and cruise missiles would be unleashed on the island’s military bases and ports, its telecommunications hubs and transport infrastructure.

The brute force of high-explosive warheads would be co-ordinated with cyber attacks to stymie co-ordination among Taiwanese troops and cause panic among civilians. At the same time, an invasion fleet would seek to land swarms of Chinese troops, tanks and trucks on the coast to occupy Taiwan in the old style.

There would undoubtedly be a huge amount of damage to infra-structure, with heavy military and civilian casualties.

Yet China cannot assume that outnumbering its enemy would deliver a rapid victory.

Yes, China has a vast and growing military, but it is untested in battle. It hasn’t fought a war since 1979, when Deng Xiaoping wanted to ‘teach a lesson’ to China’s southern neighbour, Vietnam.

It was the Vietnamese who taught China a few hard lessons instead. But that war is largely ignored in China today. Instead, it is the Korean War against the U.S.-led UN forces between 1950 and 1953 which is celebrated as Communist China’s model war. 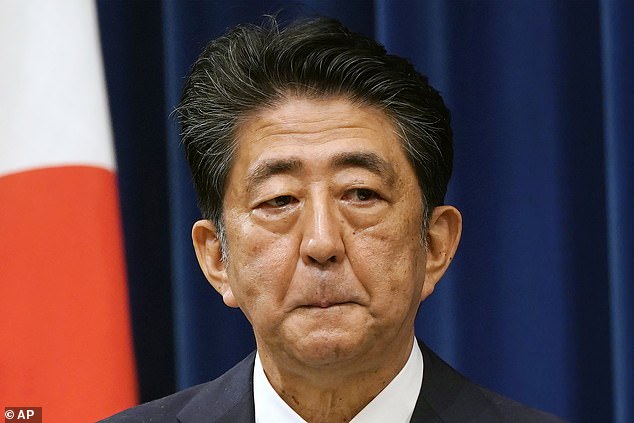 Although tens of thousands of American troops were being killed by China’s People’s Liberation Army, President Harry S. Truman backed off from his generals’ demand to use nuclear weapons.

Back then, Mao had to rely on Stalin’s nuclear ‘umbrella’ over the horizon inside the Soviet Union. Today, China has its own nuclear weapons.

Beijing holds hard to the belief that, for all his fighting talk, President Biden would, like Truman, step back from the brink if a nuclear war was the most likely outcome.

But if so, Xi and his apparatchiks, are underestimating America’s determination not to cede control in the Pacific region.

The Biden administration is, with good cause, deeply suspicious about China’s intentions in the area.

Then there is Japan to consider. Taiwan’s old imperial master (until the former’s surrender in 1945) sees the island-democracy as the southern anchor of the chain of islands which lead up to the Japanese archipelago itself.

Former Prime Minister Shinzo Abe — who was assassinated earlier this month — had consistently warned Japan’s Western allies in Europe and America that their focus on the Ukraine crisis was distracting them from the much bigger threat China posed to world stability than Russia. 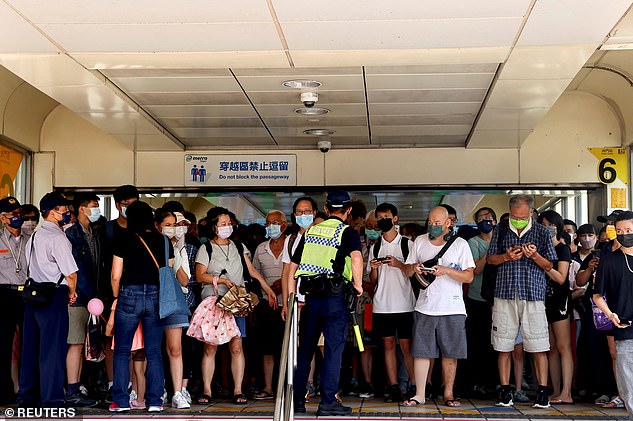 There are concerns that China will be learning from Russia’s invasion of Ukraine (pictured: People in Taiwan during an air-raid exercise)

Would Japan — a highly scientifically advanced country — rapidly acquire the nuclear weapons it needed to protect itself and deter the Chinese if Beijing decided to attack Taiwan?

And, with North Korea already testing nuclear weapons, might South Korea follow suit because of its fears of China and its Northern neighbour? The potential, then, for all-out nuclear conflict is horrifyingly close. But even without a nuclear stand-off, a Chinese invasion of Taiwan, successful or not, would be disastrous for the wider world economy.

Taiwan is one of the world’s major producers of high-tech components such as semi-conductors, and if its factories were destroyed or damaged that would affect everything from computers to mobile phones, pushing up prices and creating shortages of the everyday things we take for granted.

As for those who say Xi will hesitate to invade for fear of ‘killing the golden goose’ that is the Taiwanese economy, just look at Hong Kong. Over the past three years, Xi Jinping has been willing to slowly suffocate Hong Kong’s economic dynamism in order to stifle the democracy movement there.

He could just as easily judge that devastating Taiwan is a price worth paying for gaining the strategic advantage of using the island nation’s position to give China’s navy access to the open ocean beyond. Yesterday’s war preparation drill in Taiwan was called ‘Wan An’ — which translates as Everlasting Peace.

Peace that is ‘everlasting’ may be an unrealistic prospect, but even to achieve peace in the short term, President Biden and the West must continue to strike a delicate balance between showing support for Taiwan while not provoking Xi’s China into showing it is not afraid of us.

It is a terrifying tightrope walk between the perils of appeasement and the calamitous consequences of war. And President Xi has to get it right as well as the West.

The risks of miscalculation on either side are heart-stoppingly high.