First, the lockdown is not working. It may have prevented exponential growth in cases, but the numbers are still going in the wrong direction and at best it’s keeping a lid on the outbreak. The sacrifices Sydneysiders are making are not yielding the anticipated outcome. 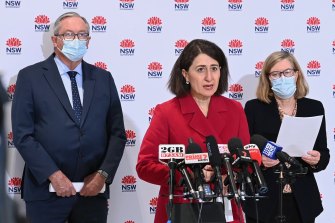 Second, the virus is circulating among essential workers and in vital retail settings. While some transmission is still occurring as a result of illegal household mixing, Chief Health Officer Kerry Chant highlighted spread in essential workplaces as a key problem.

“These workplaces are not the hairdressers or the discretionary premises, they are premises that actually put food on the table for people in Sydney,” she said.

Third, NSW effectively conceded that getting back to zero-COVID may no be longer feasible. The shift was not explicit, and cases may yet peak and decline. But it would likely take so long that we would be in a different, much more vaccinated environment by the time we got back to zero.

So where does that leave us? It means the state’s fate is tied much more explicitly to vaccination. Hence Premier Gladys Berejiklian’s short-lived plea to redirect the nation’s Pfizer doses to south-west Sydney, immediately rebuffed by national cabinet on Friday.

A reminder that NSW had done the heavy lifting of receiving returned travellers over the past 18 months did nothing to win over her counterparts. Victorian Premier Daniel Andrews said bluntly: “It’s not my job to get the pubs open in NSW.”

Instead, NSW will now push out the gap between Pfizer doses to six weeks in order to free up its limited vaccine stock for more first doses. But inside NSW Health there is concern this won’t be enough and that without extra supply the state won’t escape lockdown until late in the year.

What the next few months looks like in NSW is now being discussed at the highest levels of government. Berejiklian vowed to unveil a roadmap this week to give families, students and businesses some certainty, despite the huge number of unknowns.

A couple of things appear likely: zero cases is shaping as a bonus rather than an explicit goal, and NSW will be cut off from the rest of the country for some time. That brings its own opportunities. Within NSW, there may be room to grant more freedoms to people who have had the jab.

On Friday Berejiklian spoke of a “containment strategy” that tries to ring-fence the worst-affected local government areas, vaccinate as many people as possible as quickly as we can, and ease some restrictions where practicable without risking an explosion of cases.

Professor Greg Dore of the University of NSW’s Kirby Institute acknowledged Friday as a turning point in his home state.

“The goal still can be to pursue zero community transmission but there needs to be a realisation that it may not be feasible with a highly infectious variant and broad community spread,” he says. “The big question is: what is plan B?”

Dore thinks plan B should look something like this: a mass Pfizer vaccination drive in south-west Sydney to provide fast, widespread first-dose protection, followed by a stratification of freedoms for vaccinated people, such as exemptions from isolation requirements, being allowed to see other vaccinated family members and being able to travel within NSW.

“That benefits the whole of society in a way, because that incentivises vaccination,” he says. “It gets some movement happening, and it provides some hope for the future.”

Other experts have advocated similarly; former deputy chief medical officer Nick Coatsworth and the Australian National University’s Sanjaya Senanayake told The Weekend Australian the way to reopen was not all at once but to start giving fully vaccinated people more freedoms.

Dore also says vaccinated NSW citizens should be able to travel internationally and quarantine at home, with NSW effectively becoming the pilot program for home quarantine instead of the trials proposed elsewhere. He is less sure about opening up pubs and restaurants to vaccinated people because “you have to be very careful not to set up an us-against-them framework”. 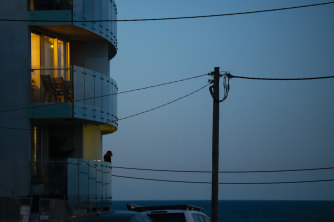 Sydney is enduring its harshest lockdown yet and could continue until November. Credit:Wolter Peeters

Recall, however, that back in January Berejiklian was open to the idea of vaccine passports for high-risk venues. “I don’t ever like to force anybody to do anything, but there should be incentives in place for people to do certain things,” she said at the time.

Berejiklian signalled on Friday she wants a more “targeted and localised” approach to restrictions. In expanding the toughest lockdown measures to the Cumberland and Blacktown local government areas, she talked of “containing the virus and not allowing it to spread further”.

Within those LGAs she also wants to “think innovatively and outside the box as to how we can get direct support to people on the ground”. And “where there are opportunities for us to open up, to ease restrictions, to let the economy undertake necessary work, we will do that”, Berejiklian said.

The government has already come under pressure from its own MPs to loosen restrictions in less-affected areas and the distribution of the virus is plainly uneven. By Friday the number of active cases in the City of Sydney LGA had fallen to 31, in the inner west it had decreased to just 10, the northern beaches was at nine and many LGAs including North Sydney, Hornsby, Ryde, Lane Cove, Mosman and Hunters Hill were sitting below five active cases. Some of those were still at zero.

Would it be politically palatable to ease restrictions in the east, and outside metropolitan Sydney, while the city’s most culturally diverse and economically disadvantaged areas stay locked down?

“I don’t think so,” says Labor MP Hugh McDermott, whose seat of Prospect takes in the affected areas. “People out here think they’re being treated as second class citizens now, and they’ve been treated like criminals.”

Professor Joel Negin, head of the University of Sydney’s School of Public Health, noted Berejiklian adjusted her language on Friday. “Using the term ‘containment’ is a gentle shift of gears, perhaps presaging what may come down the line,” he says.

Negin says NSW needed to have a conversation about alternatives to zero-COVID and what that would look like. But he also stressed Sydney had not been in lockdown for that long, relatively speaking, and could still move to harsher restrictions if there was appetite.

Berejiklian insisted on Friday she would not entertain measures that weren’t proven to make a difference, such as a curfew or a five kilometre exercise radius, saying they would not “change the dial” on caseload. “I am not the type of premier that is going to be asking citizens to do things we don’t think are going to have any effect.”

Even among the stoic, a palpable sense of despair and resignation has set in. University of NSW economics professor Richard Holden co-authored an optimistic piece in the Australian Financial Review last weekend in which he said vaccination would eventually make lockdowns a thing of the past, but not yet. “We just need to stick it out a little longer, lest all our sacrifices over the past year turn out to have been in vain,” he wrote. 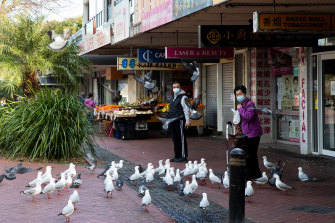 People shop for groceries in Campsie, within the Canterbury Bankstown LGA, where the virus is circulating.Credit:Janie Barrett

One bruising week later, Holden is still sunny about the end game. But he admits “the interim might not be very good”. If the lockdown can’t reduce the caseload to zero or close to zero, there are only two options, he says – neither of them good.

“One is we keep going with some version of these restrictions like they are now … until we get enough people vaccinated. That could be November. It could easily be that long.” If that transpired, it would eclipse the duration of Melbourne’s brutal 112-day lockdown of 2020.

The alternative is to give up, reopen and let the virus run rampant. “That’s a disaster for NSW and it’s a disaster for Australia,” Holden says. “I think the ‘let it rip strategy’ is not really on table. But if this is going on for a considerable period of time then trying to relax restrictions in the safest, most sensible way is the right thing to do.”

Holden suggested a vaccination blitz for teachers in order to reopen schools and a COVID-safe plan for the construction industry. The latter appears to be locked in and Chant said discussions were taking place this weekend about what “leeway” there may be in relation to schools. 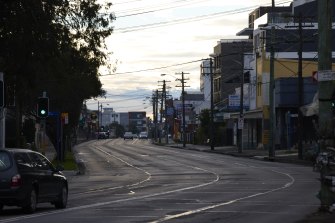 Quiet roads in Belmore as COVID-19 cases spill into the area.Credit:Brook Mitchell

The longer lockdown now on the cards will have massive economic consequences, but Holden said the financial support required to suppress the virus until NSW reaches mass vaccination is feasible, given our relatively low debt-to-GDP ratio and very low interest rates.

“It’s a relatively short period of time from a fiscal support perspective and it might only be required for NSW if we can keep things under control elsewhere. It would definitely be doable economically. Politically is a whole other question.”

A lockdown of this length will take a diabolical toll on Sydney. And while voters have shown a clear preference for putting public health above all else, the dynamic is shifting as the rest of the world opens up and Australia remains months behind.

Pollster Peter Lewis says the electoral consequences for Berejiklian aren’t necessarily immediate because the next election isn’t due until March 2023. But the polls show patience is wearing thin.

“Last year the politics of lockdown was that it was keeping people safe and leaders seemed to get a bit of a leave pass even if things didn’t quite go as planned,” Lewis says.

“This year this round of lockdowns is being seen to be driven by policy failure at a federal level by the rollout of vaccines, and we’ve seen a drop off in support for the federal government and to a lesser extent state governments in areas where there have been lockdowns.”

The “game-changing” Delta strain has changed the game in NSW, and this week we will find out exactly how much.

Stay across the most crucial developments related to the pandemic with the Coronavirus Update. Sign up to receive the weekly newsletter.