Is the Sturgeon surge over? Support for Scottish independence dives four points and Boris Johnson’s ratings creep up amid bitter SNP infighting and slow vaccine rollout

Nicola Sturgeon’s drive to split the UK was dealt a major blow today as a poll showed support slumping amid SNP infighting and slow vaccine rollout.

Research by Savanta ComRes found backing for independence has slumped four points over the past month – although it still stands at 53 per cent.

The shift came after Ms Sturgeon faced heavy criticism over the vaccine rollout being slower in Scotland than England, and the SNP plunged into full scale civil war.

The First Minister has been engaged in a bitter clash with predecessor Alex Salmond over claims she misled the Scottish Parliament and courts over when she knew about harassment allegations against him – on which he was later found not guilty.

She has said she is relishing the chance to take the accusations ‘head on’ when she appears before a powerful committee next week. 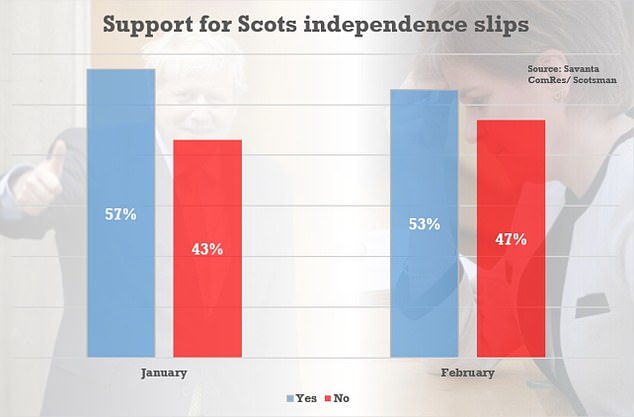 Ms Sturgeon has been pushing for another independence referendum as early as this year, even though both sides billed the 2014 contest as ‘once in a generation’.

Mr Johnson has flatly refused to grant permission, but the SNP has mooted holding a ‘wildcat’ vote anyway even though it would carry no legal force.

The Savanta ComRes poll for The Scotsman newspaper found 47 per cent north of the border would vote Yes if there was a referendum now.

Some 42 per cent were opposed to independence. Excluding the 10 per cent undecided, the split was 53 per cent to with 47 per cent.

The research, carried out between February 4 and 9, found a drop of eight points in the number of Scots who think the SNP is ‘united’ – from 50 per cent last month to 42 per cent.

More than half of Scots still say they will vote for the party in the constituency ballot at May Holyrood election, which Ms Sturgeon has painted as a decision on whether to hold a referendum.

Some 43 per cent plan to endorse the SNP on the regional list section.

Almost a quarter plan to vote for the Scottish Conservatives in their constituency, with 21 per cent backing them in the regional ballot.

Scottish Labour was in third place, with 16 per cent backing the party in the constituency vote and 18 per cent on the regional list.

The Scotsman said the figures would see 71 SNP MSPs elected – which would be a majority in the 129-seat Scottish Parliament and up from the 64 they won in the 2016 election. 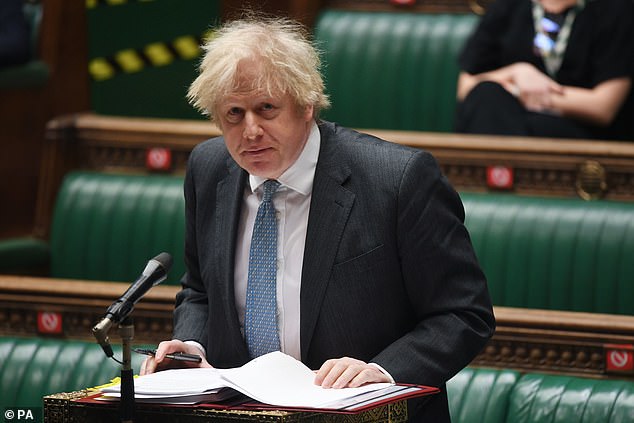 The Tories would have 24 MSPs, down seven from 2016, with Labour potentially having 19 MSPs, five fewer.

Chris Hopkins, associate director at Savanta ComRes, said ‘These figures naturally have coincided with the ongoing Salmond inquiry and while there appears to be very little direct impact on the SNP in terms of the Holyrood voting intention, we do see a four-point drop in the indyref2 voting intention, although Yes still lead by six points.’

He added: ‘An increase in the favourability of Boris Johnson and the UK Government in general may well be contributing to the Scottish Conservative’s improved showing if an election were tomorrow.’

‘While polls are encouraging, the SNP will not take anything for granted,’ he said.