Fabio Candolo shut his cafe for good in June last year but the “for lease” sign is still up on the vacant shop front on Gertrude Street, Fitzroy.

It is a story repeated up and down what is one of the best-loved retail strips in Melbourne’s inner north and across the city as it suffered through 2020, its year of pandemic and lockdown. 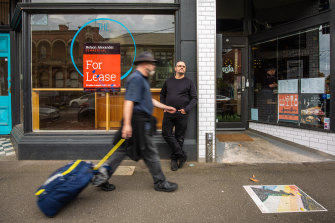 Basta Fitzroy owner Fabio Candolo closed his business next door, The Donkey Cafe, to save on rent.Credit:Scott McNaughton

Gertrude Street’s shop vacancy rate soared from 9 per cent in January 2020, before the pandemic struck, to 18 per cent 12 months later, according to data from the local council, City of Yarra, which shows other nearby shopping precincts such as Brunswick Street and Bridge Road in Richmond faring even worse.

There are tentative signs of recovery, the Gertrude Street traders’ group reports, with new businesses moving in since Yarra gathered its data, but Mr Candolo foresees a long journey for the street to get back to its bustling best.

Around the inner north and east, the number of vacant shops on Brunswick Street increased 6 per cent, while on the once-thriving Bridge Road more than a quarter of all retail premises are empty.

Damien Theisz, a commercial property agent in the city’s inner north, said there were up to 20 per cent more retail leases on the market now than before the pandemic.

“We have seen businesses close, but we have also seen a lot of new businesses pop up for retail space,” the partner at Nelson Alexander said.

Retailers willing to take a punt on Gertrude Street’s comeback might grab themselves a bargain. Mr Theisz said the going rate for shop space on the strip had fallen about 20 per cent following the lockdowns, and although inquiry levels in the inner north were higher than before the pandemic, building owners were going to have to move with the times.

Across the city, the damage brought by the coronavirus lockdowns is written in the windows of vanished businesses on some of Melbourne’s most renowned shopping strips.

A study of 11 of Melbourne’s prime strips, including Acland Street in St Kilda, Chapel Street in South Yarra and Burke Road in Camberwell, by Plan1 analyst and consultant Richard Jenkins found an average vacancy rate of nearly 14 per cent, more than twice the 20-year average of 6 per cent.

Mr Jenkins, who calculates that 900 shops on Melbourne’s prime shopping strips shut down in 2020, found Bridge Road, with an all-time-high 26 per cent of its retail units empty, and Acland Street, where 20 per cent of shopfronts sat idle by February, in terrible trouble.

The analyst attributed Acland Street’s woes to the closed international borders, which have drained much of the economic lifeblood from the backpacker hotspot, but problems on Bridge Road, which is being abandoned by discount fashion retailers, pre-date the COVID-19 pandemic.

Of the strips examined in Mr Jenkins’ study, only Church Street in Brighton and Puckle Street in Moonee Ponds recorded single-digit vacancy rates. He said it was the mix of retail and service occupants on the shopfront of those streets that gave them the strength to weather the worst of the pandemic.

“That’s not because it is in the demographic where it is; it’s more that there are more services-based operators, whether it’s hair, post office, doctors, dentists, things like that.”

There is no doubt that online retailing is hitting traditional bricks-and-mortar shops, but Mr Jenkins says changing shopping habits are only part of the story of decline.

“Bridge Road is a classic case of losing identity,” he said. “Twenty years ago that was where you would go for your discount fashion outlets. All of a sudden there are DFO centres, so those groups are clustered in those centres and I don’t think that Bridge Road has truly accepted that change.”

Back on Gertrude Street, the traders’ group says the Yarra Council vacancy data does not reflect a renewed optimism and confidence along the strip, where six new shops have opened since the middle of last year.

“While there are still vacancies along the street, there are traders reporting they are doing good business,” People of Gertrude Street’s Peter Kaylor said.

“There is more of a buzz and an energy than many other high streets.”

But Mr Kaylor said fewer international and interstate visitors posed one of the bigger challenges.

Mr Candelo, who closed his cafe after operating it for five years to save money on rent when trade fell, still believes he made the right call.

Trade remains about 60 per cent down at Basta Fitzroy, the cafe he still owns next door, and without rental assistance, Mr Candolo says closing one was a “really good decision”.

“It’s ridiculous the rent they ask for some places here in Fitzroy,” he said. “No one really wants to stay centrally in the city; they would rather risk a business further out.”

Several other Melbourne councils approached by The Age either said they did not collect retail vacancy data or refused to share their figures, but the City of Moonee Valley, in the city’s inner north-west, said 175 more shops in the council area were unoccupied at the start of this year than in August 2019.

In the CBD, the City of Melbourne said retail space vacant or for lease had remained at about 14 per cent since the end of 2020 and more than half of the temporarily closed businesses had reopened in that time, but the council said it could not provide figures for individual streets.

Mr Simpson said: “In the Melbourne CBD, many retail and office tenants had decided to close their businesses before the withdrawal of government support as the anticipated return to the CBD by office workers was delayed.”

He said rent reductions agreed between struggling tenants and their landlords would need to continue in some cases despite the government’s formal relief efforts ending.

Further north, in Preston, Hunter and Co Vintage owner Gareth Cassidy is closing his furniture shop after eight years because his rent relief has ended and he was unable to renew his lease with the landlord.

“Even with the low rent, it still wasn’t worth it with the way things are,” Mr Cassidy said. 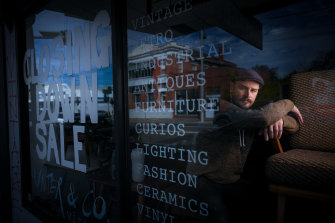 Gareth Cassidy at his store, Hunter and Co. Vintage.Credit:Eddie Jim

He said the risk of another lockdown had made him unwilling to take another lease elsewhere. He also believed many in the furniture industry were turning to social media to sell goods.

“You wouldn’t want to be a landlord either. The sufferings are on both sides,” Mr Cassidy said.