The city of Charlottesville, Va. followed up its removal of two controversial Confederate statues Saturday with the lightning-fast toppling of a third local landmark: a monumental tribute to explorers Meriwether Lewis, William Clark, and Sacagawea.

In an emergency meeting called with 20 minutes’ notice, the Charlottesville City Council voted unanimously to cancel another piece of public art targeted by left-wing activists.

“I feel that it should just be melted down,” Rose Ann Abrahamson, a Sacagawea descendant, said during the council meeting, The Daily Progress reported. “I feel that it’s entirely offensive and it should be obliterated.” 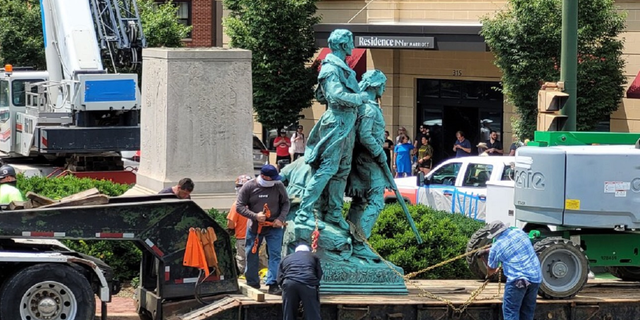 Within minutes, a city work crew — the same group that had dismantled equestrian statues of Gens. Robert E. Lee and Thomas “Stonewall” Jackson earlier Saturday — arrived with ropes, a crane, and pry bars to wrench the artwork off the plinth where it had stood on Charlottesville’s West Main Street since 1919.

“Getting right down to business, not even taking the cherry picker off the truck,” Conger wrote.

Lewis, the famous American adventurer who was sent by President Thomas Jefferson to explore the land west of the Mississippi River in 1804, was a local hero born in Charlottesville’s Albemarle County.

The bronze statue cast to honor the Lewis and Clark expedition includes the two men and Sacagawea, their Shoshone guide and interpreter.

In recent years its design has been criticized for its portrayal of Sacagawea, who appears in a crouching position behind the standing white men — which activists have seen as disparaging.

But some historians contend that her posture shows her in action as a tracker and is not meant to place her in a subservient stance.

Charlottesville’s Lewis and Clark Exploratory Center has offered to take the statue — but the city council has not yet decided to accept its plan.

“Getting right down to business, not even taking the cherry picker off the truck,” Conger wrote.