The wide-ranging class action lawsuit brought against the NFL and a handful of teams by former Miami Dolphins coach Brian Flores may be about to add another plaintiff.

Two sources close to former Cleveland Browns head coach Hue Jackson said Wednesday that Jackson has made arrangements to speak with Flores’ attorneys about the suit as early as today. The sources also said Jackson has expressed a willingness to provide both testimony and materials to the class action suit, alleging that Browns owner Jimmy Haslam financially incentivized “tanking” for draft position through the use of a bonus structure during the 2016 and 2017 seasons, when Cleveland went 1-31.

Some of the materials in Jackson’s possession stem from a confidential fraud grievance he brought against the Browns following his in-season firing in 2018. That grievance was handled by an arbitrator under the terms of the NFL’s collective bargaining agreement. That arbitrator ultimately ruled against Jackson, although the judgement was not considered a definitive determination of fact.

Jackson declined to comment Wednesday. A spokesperson for the Browns said the team was preparing comment on Jackson’s allegations but it was not yet available. On Tuesday, the NFL released a statement refuting the claims in Flores’ lawsuit and said the litigation was “without merit”.

Since the filing of Flores’ lawsuit, both Jackson and the head of his charitable foundation, Kimberly Diemert, have posted a number of tweets suggesting Jackson’s intent to engage with the Flores litigation. Jackson, who is now the head football coach at Grambling State University, suggested that he encountered some of the same things Flores alleged in his lawsuit against the Miami Dolphins, New York Giants, Denver Broncos and the overarching NFL corporation. 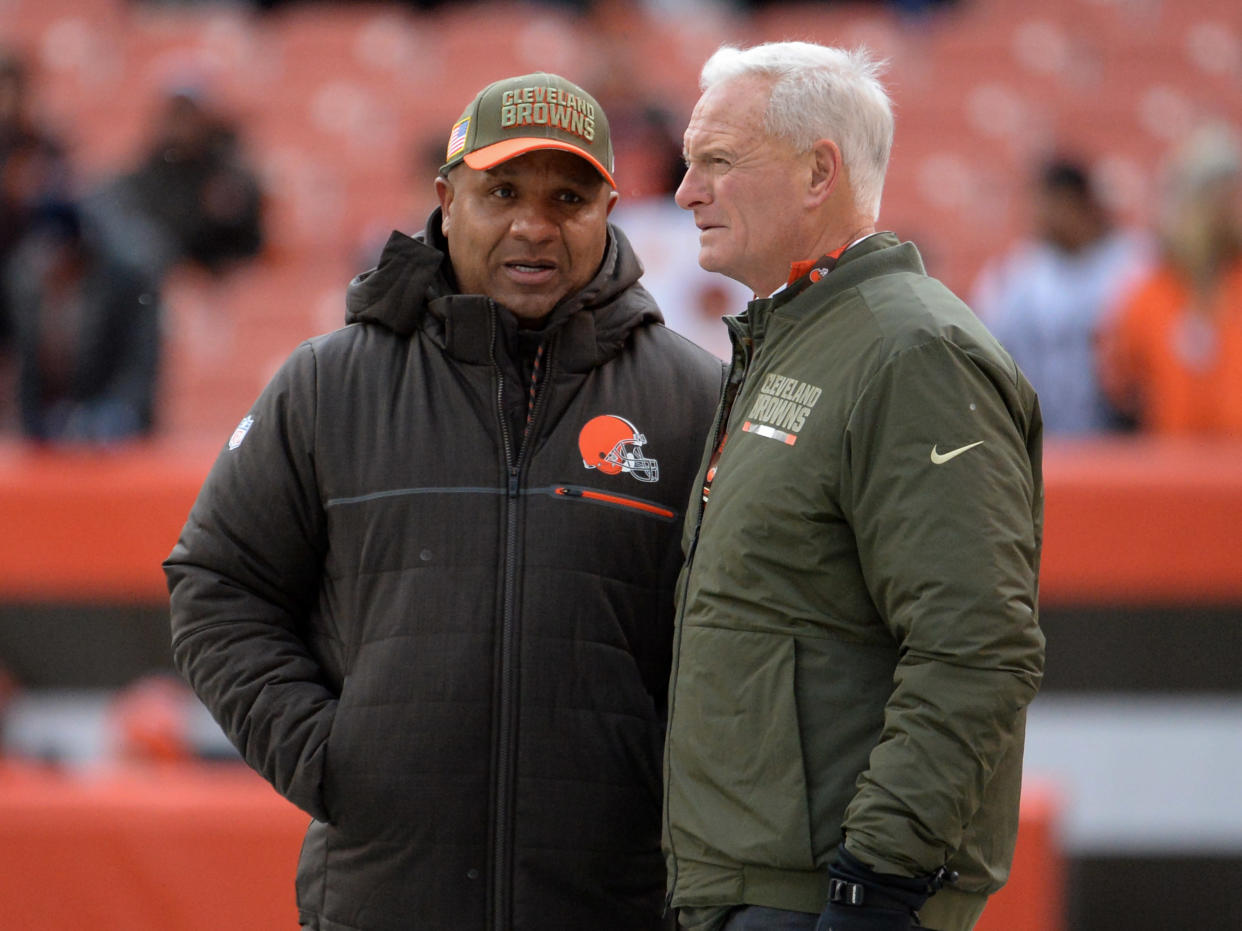 Prior to this suit, Jackson had spoken critically about black head coaches having their success undermined by owners that allegedly set a double standard for minority coaches when it comes to the building and success of franchises — as well as the “second chance” opportunities granted to white head coaches versus minorities. Jackson also repeatedly has made claims that during his time in Cleveland, Haslam blindsided him with the size of the rebuild that was going to be undertaken, as well as some of the methods that would be employed during the rebuild.

On Tuesday, he added a wrinkle to those claims, suggesting that Haslam tied finances to what Diemert said was tanking. Responding to a tweet that said “Haslam wasn’t offering 100k per loss,” Jackson said “Trust me it was a good number!”

Diemert then followed up with a series of tweets stating that Jackson has records to back up his claims, and that several team leaders (including Jackson) were a part of a bonus structure to “tank,” including former general manager Sashi Brown, chief strategy officer Paul DePodesta and current general manager Andrew Berry. Diemert added that both the NFL and commissioner Roger Goodell knew about it and “covered it up,” which is likely a reference to evidence provided during Jackson’s failed grievance against the Browns.

Attorneys for Flores said Wednesday that other coaches have not become a part of the class action lawsuit brought against teams and the league, but that it is expected more will join the litigation.