Picture the scene. You are the only doctor on one of Australia’s remote stations in Antarctica. One of the expeditioners comes to you in agony. You need to perform an appendectomy. Now.

Winter ice floes mean there’s no possibility of evacuating a patient for nine months of the year. No helicopter coming to the rescue over the horizon. You are on your own. 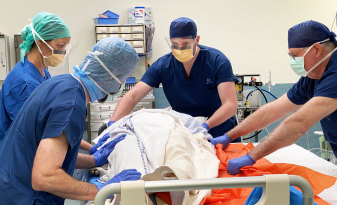 It’s a good job, then, that the chef, boilermaker, plumber and carpenter are good at multitasking and have all been trained in operating theatre procedures to be lay surgical assistants (LSA).

Four doctors head off this week to provide medical cover on Mawson, Davis and Casey stations in the Antarctic and Macquarie Island station in the subantarctic. Each is responsible for providing all surgical, medical, anaesthetic and dental care for expeditioners on their stations.

The voyage to change over the Davis and Mawson teams and resupply the stations is due to depart this week, with 75 expeditioners on board.

Among them will be John Cherry who has been undertaking scenario training with lay surgical assistants as part of a two-week specialised training course at the Royal Hobart Hospital, a collaboration between the Tasmanian Department of Health and the Australian Antarctic Program. Tasmania is at the forefront of training for medical care in remote and extreme environments. 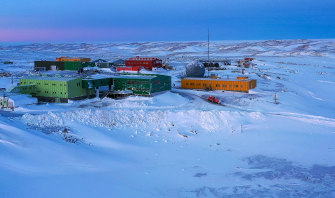 “I’m heading to Davis station — the furthest south over winter where there will be 26 people based. Being the only doctor on an isolated station when there’s no possibility of evacuation for up to nine months of the year provides some pretty unique medical challenges.”

Historically an appendectomy is the commonest operation (but isn’t commonly performed). There could be life-saving procedures following trauma (quite rare). Major abdominal surgery has been performed, perforated bowels attended to but no babies delivered.

Dr Cherry said doctors could always pick up the phone and ask for help from other doctors or specialists. Telemedicine allows them to transmit real-time patient data, still and moving images, scans and medical imaging for remote interpretation.

Jordan Smith is a chef at Davis and has previously been to Casey station for three summers and a full year.

“It’s a real privilege to be an LSA in Antarctica,” she said. “As a chef I would never have an opportunity to do anything like this and it’s just amazing.”

Richard Charles-Norris, a boilermaker at Davis station is making his first trip south.

“I’m 37 years as a boilermaker, so I’m pretty experienced in that,” he said. “This is a totally different thing. A little bit of an eye-opener, but really reinforces that you have to be on to it, really watch what’s going on.”

For Tom Jurs, a carpenter at Davis, it will be his ninth season and said it gets less daunting.

“Every time is quite dynamically different to the last,” he said.

“I’d have no usual business walking from a construction site into a hospital room assisting with surgery. It’s been an incredibly stimulating and rewarding. Strange that you learn a set of skills that you’d hope never to have to deploy in real life, but nonetheless, invaluable.”

There have been no cases of COVID-19 at the Australian Antarctic stations, although 36 Chileans at an army base in Antarctica were reported to have tested positive for coronavirus last December.

The most important news, analysis and insights delivered to your inbox at the start and end of each day. Sign up here.