By late Wednesday morning, all that was left for Ben Roberts-Smith’s barrister was to gather the strings, to convey the magnitude of the impact of the articles on his client, to give the unhappy ending.

Bruce McClintock, SC, had escorted the former SAS soldier through four days of evidence, addressing each of the allegations published by The Age, The Sydney Morning Herald and The Canberra Times and countering them. 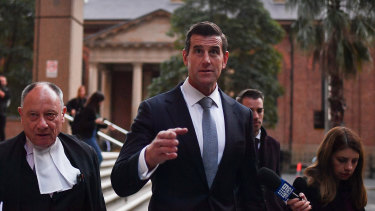 Last week, they trudged through the battlefields of Afghanistan, where Mr Roberts-Smith earned his Victoria Cross, and then the messy aftermath, where some soldiers were labelled cowards and others became known as braggarts. It was in this context, Mr Roberts-Smith argued, that jealous rivals made allegations to the press that he had committed war crimes.

On Tuesday, Mr McClintock unspooled the ragged wire of Mr Roberts-Smith’s personal life in the months before he is alleged to have punched his mistress in the face. It was against this background, Mr Roberts-Smith argued, that she over-indulged in alcohol and fell down the stairs.

But on the last day of Mr Roberts-Smith’s evidence, it fell to Mr McClintock to coax from Mr Roberts-Smith a demonstration of the emotional impact on him from the published articles. And for several hours, he plumped his questions to find it.

Mr McClintock has given finer performances in his 40-odd years at the bar, but his examination of Mr Roberts-Smith had the practised cast and reel of a fly fisherman. If he allowed his question to drift in the right spot, the fish would find it. He softened his voice.

“How did it make you feel when you realised that was being said about you?”

“And did you consider the impact on your parents, Mr Roberts-Smith?”

“And how did it make you feel when you received that telephone call from your wife?”

“Did you have concerns about your children, Mr Roberts-Smith?”

The former patrol commander was a model witness. Not for him the rabbit holes and ambient justifications to which many witnesses are prone. He was precise in his recollection, clear in his delivery and disciplined with his responses. He did not stray from the point.

The day after the first article was published online, on June 10, 2018, Mr Roberts-Smith had a speaking obligation in the afternoon.

“It was the start of what would become my normal way of life, which is to put on a front and be out in public doing the right thing by my colleagues, my family, when the reality was I was wracked with anxiety and wanted to stay at home,” Mr Roberts-Smith said.

“I was worried about my children. I was worried … what people might say to them, what someone might do to them.”

And the articles kept coming: three stories that weekend, another one two months later and on it went. He became paranoid, he told the court. He could not sleep. But he needed to meet the standards of a decorated soldier.

It was near lunch. Mr McClintock pressed again. “How do you think people see you now, Mr Roberts-Smith?”

The reply came deeper, more hollow: “That’s the problem. I don’t know. I used to.”

He blew his nose. Mr McClintock turned to gauge the room.

Out the window, a seaplane could be seen lifting off from Rose Bay, rising above the white triangles bobbing on the harbour.

In the witness box, Ben Roberts-Smith was weeping.