Putin may be losing the information war, but Zelensky’s NATO concession suggests Ukraine may be losing on the battlefield. The West must not fool itself into thinking otherwise, writes military expert BILL ROGGIO

Bill Roggio is a senior fellow at the Foundation for Defense of Democracies and editor of FDD’s Long war Journal.

As Russia’s brutal invasion of Ukraine grinds on into its fourth week, the physical war rages in the cities and countryside, while an information war is waged over the airwaves and on the internet and social media.

On the actual battlefield, the Russian offensive has undoubtedly slowed over the past week. But what is being described as a ‘stalled’ takeover may be the result of the Russians taking time to reorganize their forces and improve their logistics.

On the Western side of the information war, we were told from the opening days of the conflict that the Russian military would break due to high casualties and defections, loss of tanks, armored vehicles, artillery and aircraft, and domestic opposition.

Videos of Russian battlefield setbacks abound in the media, and strangely there is little reporting on Ukrainian losses.

And yet, over three weeks into the war, Vladimir Putin remains president and the Russian war machine has not collapsed but in fact continues its plodding, imperfect, and messy advance.

Ukraine certainly has won the war on social media and in the press. This gives the average Western viewer the impression of a lopsided victory in favor of Ukraine.

Additionally, the Pentagon has taken the unprecedented step of conducting daily briefings on the war, even though the U.S. is not at war.

The Pentagon assessments often track closely with assessments given by the Ukrainian government. 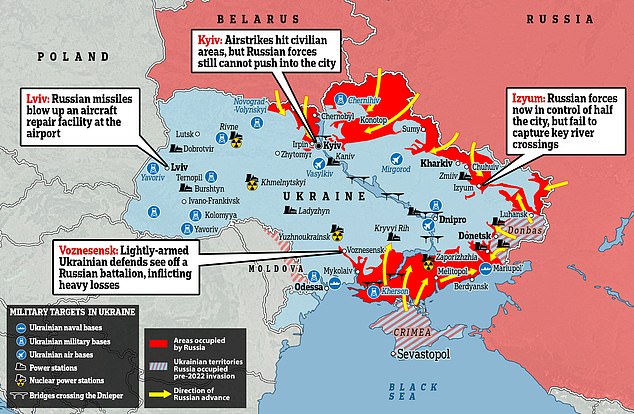 The Russian military has used a mix of maneuver and siege warfare in an effort to achieve its goal of breaking the Ukrainian military and government and conquering vast regions of the country.

This is not a condemnation of the West’s use of information and disinformation.

These tactics play a role in the management of conflicts. But the West should not delude itself into believing that the Ukrainians will be saved by wishful thinking.

Russia has waged its own clumsy disinformation campaign in an effort to show that its people are united in Putin’s so-called ‘special military operation’ – the name he gives for his country’s illegal invasion and war.

On Friday, Russia organized a massive rally in an effort to show the Russian people stand behind him. Meanwhile, thousands of Russians have been arrested for protesting the war.

Putin has also issued a chilling warning to dissenters in his country, likening them to gnats and signaling new repression, while passing laws that make protests illegal and protesters are subject to fines and even prison sentences.

The leader of a unified cause does not employ these tactics.

While each side attempts to promote its narrative of success, one potential sign of the true condition of the Ukrainian defense is Volodymyr Zelensky’s recent concession on NATO membership.

Zelensky appears to have caved on one of Putin’s reasons for going to war.

‘It is clear that Ukraine is not a member of NATO; we understand this,’ the Ukrainian president said. ‘For years we heard about the apparently open door, but have already also heard that we will not enter there, and these are truths and must be acknowledged.’

Without NATO membership, Zelensky must rely on Western weapons shipments, sanctions, economic embargoes, and other forms of soft support. It remains to be seen if these efforts are enough to turn the tide against the Russians.

The truth on the ground is that Ukrainians are putting up stiff resistance everywhere in an effort to defend their cities and make the Russians pay for every inch of ground.

But short of the quick capture of Kyiv and the collapse of President Zelensky’s government, the Russian assault on Ukraine was always going to take time.

Conventional warfare is a time, manpower and equipment consuming effort and quick victories are rare. 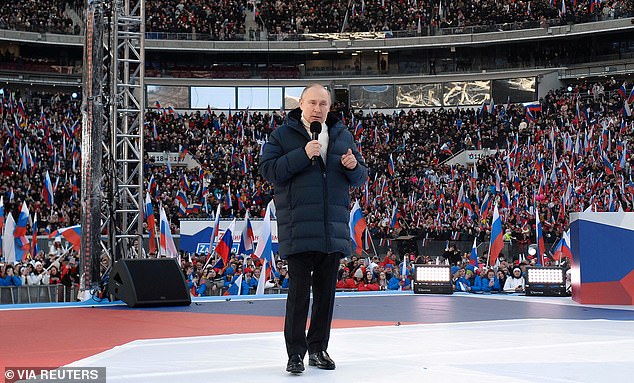 On Friday, Russia organized a massive rally in an effort to show the Russian people stand behind Putin. Meanwhile, thousands of Russians have been arrested for protesting the war.

We must remember that it took the U.S. military three weeks to take Baghdad and 42 days to conquer Iraq in 2003.

The Russian military is far less proficient than its American counterpart, and the Ukrainians are superior defenders and more highly motivated that Saddam Hussein’s army.

As I’ve written previously, the Russian offensive was launched on multiple fronts and has four major targets: the capital of Kyiv; Kharkiv, Ukraine’s second largest city and the north; the east, including areas west of the Donbas region, and the south, including the ports on the Black and Azov seas.

The Russian military has used a mix of maneuver and siege warfare in an effort to achieve its goal of breaking the Ukrainian military and government and conquering vast regions of the country.

Where the Ukrainians have put of stiff resistance in the cities, Russian forces are bypassing them to take other key objectives, while at the same time the Russians are attempting to surround the cities and pound them into submission with deadly air and artillery strikes.

This can be most easily seen in the north on the Kharkiv front, where Russian troops hit a wall north of the city.

The Russian military is now attempting to encircle Kharhiv, while pummeling it with artillery.

They also dispatched troops southward towards the town of Izium, which U.S. Defense officials said was taken yesterday.

If the Russians can push south of Izium, they can encircle Ukrainian troops in the northeastern part of Ukraine and cut them off from resupply.

This is a classic military maneuver. Once a force is surrounded, they will begin to run out of necessities, like food and ammo. 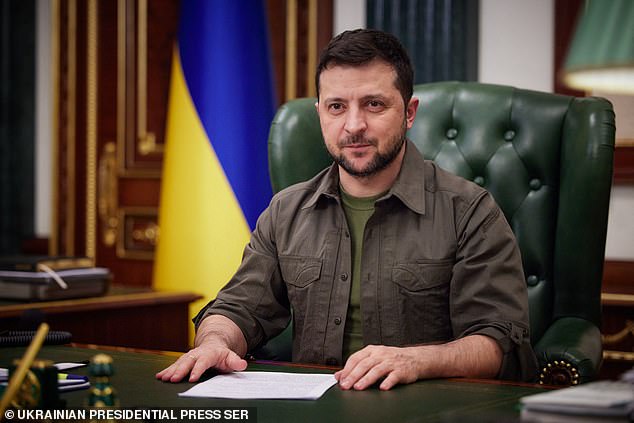 While each side attempts to promote its narrative of success, one potential sign of the true condition of the Ukrainian defense is Volodymyr Zelensky’s recent concession on NATO membership.

Run out of ammo and you can’t defend yourself – it’s that simple.

In the south, the situation is also tenuous for the Ukrainians as Russia controls all major coast areas except for Odesa and Mariupol.

The latter city is completely surrounded, being hammered by artillery and starved.

The Russian force is slowing pushing northward from there.

Further west, Odesa is proving to be a tough nut to crack as Russian forces are finding it difficult to reach the city.

Some Russian forces are also pushing north to Kryvyi Rih with the likely goal of reaching Dnipro.

If the Russians could reach Dnipro, the entirety of eastern Ukraine would be in danger of falling to the Russians.

In and around Kyiv, the situation has stabilized for the Ukrainians for the time being.

But Russian forces are on the outskirts of the city, and only the areas south of Kyiv are open.

Ukraine is understandably prioritizing the defense of its capital. However, this likely drawing resources from other fronts.

West of Kyiv, Russia forces have stepped up long range attacks, hitting Ukrainian bases with missile strikes, including some key air bases near the Polish border.

While the information campaigns have clouded the reality of the situation on the ground, what has also become clear is that Russian military does not pose a conventional threat to NATO.

Smaller, non-NATO members, such as Moldova, are not so lucky.

Whatever successes the Russian military has had in Ukraine, the operation has exposed serious flaws in its ability to wage war against an adversary with advanced weaponry and sophisticated tactics. 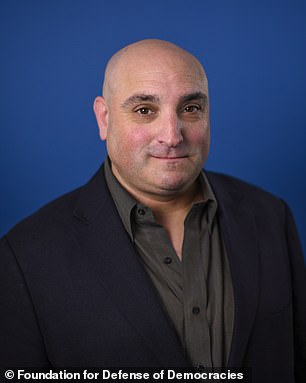 Author Bill Roggio was embedded with the U.S. Marine Corps, U.S. Army, and Iraqi forces in Iraq between 2005 and 2008, and with the Canadian Army in Afghanistan in 2006. From 1991 to 1997, Bill served as a signalman and infantryman in the U.S. Army and New Jersey National Guard.

The Russian air force’s inability or unwillingness to gain air superiority over the whole of Ukraine against a less capable foe raises questions about its performance in a potential war against the West.

NATO air power is far superior to that of Ukraine, and would very likely savage Russian armor, ground forces and its logistical support.

NATO ground forces would exploit the Russian military’s inability or unwillingness to deploy its infantry to screen against mobile anti-armor teams.

In conclusion, the Ukrainians are currently playing for time, slowly ceding ground while whittling down Russian armor and infantry.

The Russians strategy is also predicated on time; its multi-front offensives also seek to grind down Ukrainian forces and encircle them requires time to execute.

It remains be seen if time is on the Ukrainian or Russian’s side. Good arguments can be made for both.

Wars are ultimately about will – the will to sacrifice soldiers, civilians, material, and land in order to set the conditions for victory. Both sides have shown they have the will to continue the fight.