For more than three decades I reviewed restaurants for Australia's best newspapers. I can't remember ever judging one outdoors.

The government's $97.5 million push to make us eat in the streets is ridiculous. I go camping, walking and swimming outdoors. I don't eat al fresco unless it's a sandwich and I've pulled off a freeway. 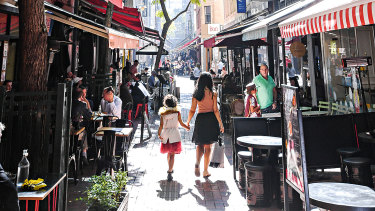 $87.5 million will go to hospitality operators and local councils to make outdoor eating ‘safe, practical and a reality’, says the premier’s website.Credit:The Age

Melbourne is not New York, Rome or Paris. Eating outdoors in those cities is performed for performance reasons – you want to be seen to be doing it. It's cool. You may watch strange folk also trying to be cool. You may imagine that you're a local. Sipping an espresso on the Via del Corso might boost what's left of your self-esteem. By all means go ahead and consume traffic fumes and try to make yourself heard over the noise of internal combustions.

Melburnians, on the other hand, are considerably more sophisticated. We eat out indoors to revel in flavours and textures. We are smart diners, perhaps the world's smartest. (And I've eaten out in the world's alleged top restaurant cities.)

Premier Dan Andrews applauds Lord Mayor Sally Capp for her contributions to reopening Melbourne. I'd like to know how much she contributed to the outdoor-eating push. You see, it's fine for small cafes to offer al fresco coffee and cakes.

No one's scoring the vanilla slices – rolling them around in their mouths in search of an especially refined haunt of vanilla. And she'd no doubt love to see Melbourne's laneways such as Degraves Street bustling again. I suspect that all of us would. Fine.

But just don't impose it on Melbourne beyond the CBD, on people who no longer go to the city, no longer work there and certainly don't eat out there. We delight in eating indoors in restaurants, not cafes. We don't want our coqs au vin and massaman curries to get cold and corrupted. Suburban Melburnians have a restaurant culture. Country towns have café cultures – and generally sell great coffee – because they have few or no restaurants.

Go to the poorly written government websites for the scheme's details. A total of $10 million in what are called "Small Hospitality Grants" will go to the CBD, the World Trade Centre, Southbank and Docklands. For eating places of 11 to 100 seats, the grant is $5000. For those with 101 seats and more – $15,000.

Once again, the big boys get three times the help of smaller and harder-hit places. Big restaurants have economies of scale to fall back on. Small ones don't. And we can't have our alleged top restaurants sustaining too much COVID-19 damage, can we? Moreover, eating places with 10 and fewer seats are ineligible for the grant.

Beyond those CBD and inner-city postcodes, $87.5 million will go to hospitality operators and local councils to make outdoor eating "safe, practical and a reality", says the premier's website. Grants of up to $5000 will go to operators for items such as umbrellas, outdoor furniture, screens and so on. (On Monday, Andrews mentioned planter boxes.)

The pool is worth $58 million. A further $29.5 million will go to councils to help them to streamline permits, enforcement and monitoring.

Despite figuring out how many planter boxes – let alone plants to go in them and gardeners to maintain them – and umbrellas you can buy with five grand, who pays for the road and footpath closures to move restaurants outdoors? Moreover, where is the space?

Serious outdoor eating is not what Melburnians do. We don't want to "take our café culture outdoors", as you put it. It's a stupid idea. The money should be better spent.

Dr Stephen Downes reviewed restaurants over several decades for The Age, The Sunday Age, The Australian Financial Review, and the Herald Sun.