A public health expert has been blasted for ‘fat shaming’ Santa and claiming he’s a Covid risk by visiting homes, as anxious Britons fear spending Christmas apart from their families.

Social media users took to Twitter to slam comments made by Professor Emer Shelley in a tongue-in-cheek section of Good Morning Britain today.

Professor Shelley, of Public Health Medicine Ireland, appeared on the ITV show, where she explained that Father Christmas had undergone a serious risk assessment due to the coronavirus pandemic.

She described him as being a ‘risk of transmitting the virus’, that he was ‘not exactly thin’ and that he would be ‘at risk of being admitted to intensive care’.

Studies have shown obese people may suffer more from Covid-19 because their weight damages their immune system.

But Professor Shelley said Father Christmas would still be able to visit homes because he ‘won’t come across anybody’ and he ‘travels so quickly’.

However, the mock report was met with a mixed reaction on Twitter, with some slamming Professor Shelley for ‘fat shaming Santa’. 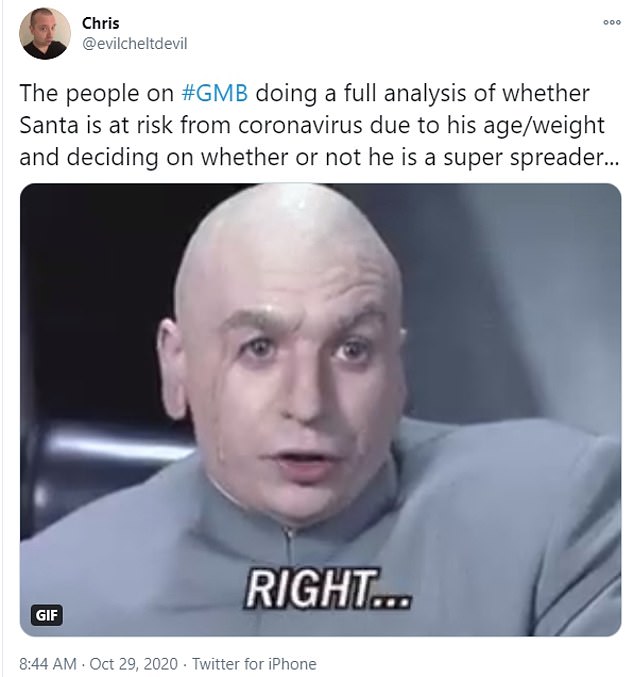 Another, including an image saying ‘right…’ said: ‘The people on GMB doing a full analysis of whether Santa is at risk from coronavirus due to his age/weight and deciding on whether he is a super spreader…’

Another added: ‘I’ve accidentally switched on GMB to hear a group of adults discussing whether Santa could visit this year and if he does, would he be a super spreader?! I’m going to bed.’

Julie Kinsey took a similar line, saying: ‘I can’t believe this panel of experts were also discussing whether Santa should do worldwide travel at Christmas when he is clinically obese and at greater risk of contracting Covid. Back to bed for me!’

Others took an even stronger line, with one branding the talk ‘disgusting’. 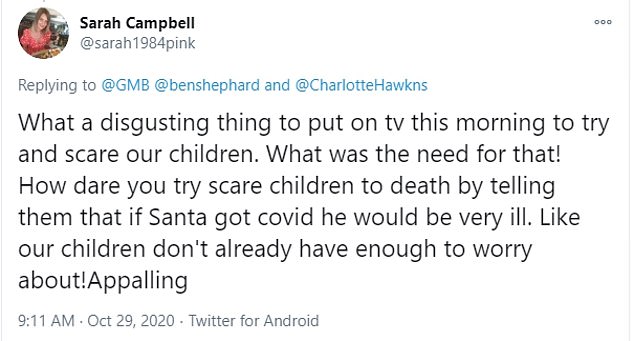 Sarah Campbell said: ‘What a disgusting thing to put on TV this morning to try and scare our children. What was the need for that!

‘How dare you try scare children to death by telling them that if Santa got Covid he would be very ill. Like you children don’t already have enough to worry about! Appalling.’

But the tongue-in-cheek conversation was not met entirely with criticism, with some viewers loving the discussion.

Danielle Mill said: ‘Love that Santa has been discussed in the Covid-19 Christmas update. My six-year-old is in the room and his ears perked up!

‘Bringing the Christmas magic in a time of uncertainty makes my heart smile. Thank you!’

Another said: ‘Loved the chat about Santa! My 8-year-old is so happy, you’ve made our day.’

Kerrie Rourke said: ‘Emer Shelley thank you for the magic moment on GMB this morning… So relieved and happy that Santa is OK to arrive.

Another added: ‘So pleased Santa and his ‘entourage’ have been properly risk assessed.’

The debate on Twitter came after the conversation involving the professor and GMB hosts Ben Shephard and Charlotte Hawkins.

During the broadcast, Professor Shelley said: ‘We have considered whether or not Santa clause can travel this Christmas.

‘It’s a serious issue we’ve just been talking about travel between countries but of course Santa travels all around the world, is he at risk of transmitting the virus right around the world and is there risk for Santa Claus himself ‘He’s not exactly thin in fact if he were having a medical exam he would be clinically obese, that puts him at higher risk of diabetes and high blood pressure.

‘So if he were to catch Covid he would be at risk of catching a very serious version of it and being admitted to intensive care so that was a real worry.’

However, she added: ‘ Discussing it with colleges we realised everyone is asleep when Santa calls so he won’t come across anybody and secondly he travels so quickly.

‘If even a part of his entourage were to have the virus they travel so quickly there is no risk of transmitting the virus to anybody around the world.’

The issue of weight and the impact of Covid-19 has been a major talking point throughout the pandemic.

Boris Johnson, who was taken into intensive care with coronavirus at the start of the pandemic, later blamed his weight on his struggles with the illness.

He pledged to get fitter, and has since been seen regularly exercising, and has urged others to do the same in a bid to minimise the impact on the NHS.

Last month, researchers from the University of Michigan found that people who are seriously overweight are more likely to suffer from severe coronavirus symptoms.

This could be because their excess weight means their immune systems are constantly under strain and running at a higher baseline than people of a healthy weight, the study found.

High levels of fat and sugar in the blood can trigger swelling inside the blood vessels and organs.

As a result, when someone gets an infection, their already-running immune system is closer to tipping over the edge into over-reaction than a healthy person’s is.

The body’s own overreaction, which can cause sepsis and deadly organ damage, has been seen repeatedly in the sickest patients with Covid-19.