A diversity campaign in support of hijabs launched by Europe’s leading human rights organisation has been pulled after a backlash in France.

The Council of Europe released a series of images last week as part of an anti-discrimination campaign in a bid to promote respect for Muslim women.

Tweeted images showed portraits of two smiling young women spliced in half and fused together to show one with hair uncovered and the other wearing the hijab. 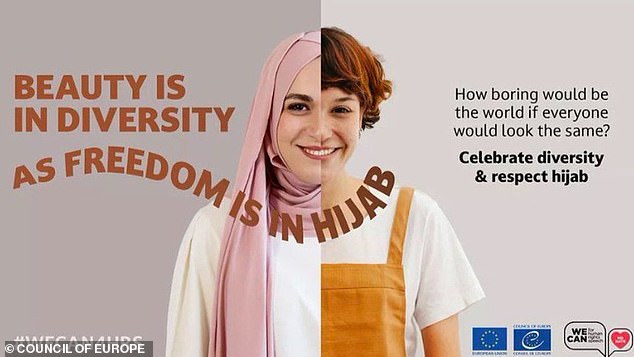 One advert read: ‘Beauty is in diversity as freedom is in hijab.

‘How boring it would be if everyone looked the same? Celebrate diversity and respect hijab.’

The online campaign, co-financed by the European Union, touched a nerve among the right in France where campaigning is ramping up ahead of next spring’s presidential election.

The images were seized upon by anti-immigration contenders seeking to unseat President Emmanuel Macron in next year’s vote, and who fiercely oppose hijab-wearing in public.

But others said the fierce opposition in France highlights the problems the campaign was seeking to target. 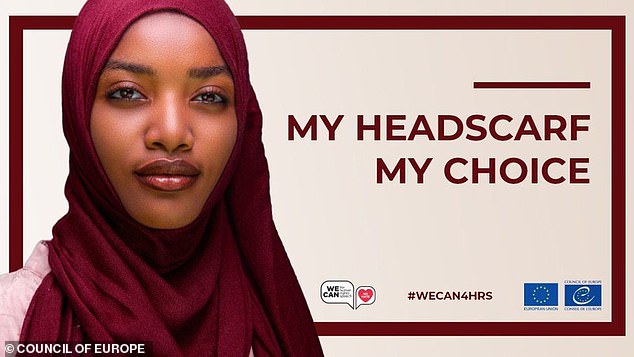 Far-right commentator Eric Zemmour, who has yet to confirm his candidacy for president but is expected to challenge Marine Le Pen, said: ‘Islam is the enemy of freedom. This campaign is the enemy of truth.’

Le Pen added: ‘This European campaign promoting the Islamist veil is scandalous and indecent at a time when millions of women courageously fight against this enslavement.’

The Council of Europe is one of the continent’s oldest political institutions and aims to promote human rights and the rule of law.

It is distinct from but partly funded by the EU and the campaign was the product of two workshops held in September with Femyso, a forum of Muslim youth organisations.

The words in the campaign ‘reflected individual statements from people who took part in one of the project’s workshops’, a Council spokesman told the BBC. 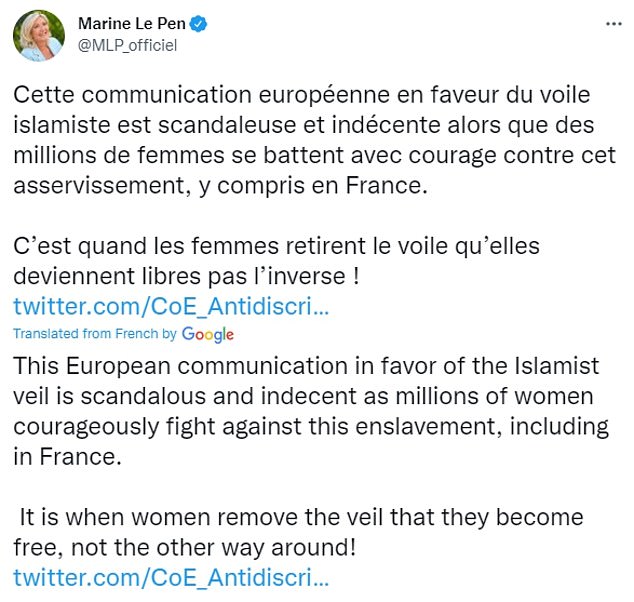 President of Femyso, Hande Taner, said it was ‘really sad that the efforts of minority youth are being attacked and undermined’ by politicians.

She said it was ‘another example of how the rights of Muslim women are non-existent to those who claim to represent or protect notions such as liberty, equality and freedom’.

Muslim headscarves have been a thorny issue in France for many years and in 2010, a ban on face coverings was imposed.

In a country where secularism is a cornerstone of national values and the election campaign has been fought mostly on right-wing territory, the outcry went beyond extreme right-wing politicians.

Paris region chief Valerie Pecresse, a possible contender against Macron from the traditional right, said she was ‘astonished’ by the campaign and added the hijab was ‘not a symbol of freedom but of submission’.

Former EU Brexit negotiator Michel Barnier, who is also seeking the right-wing nomination to stand for president, added: ‘I would have wanted the people who had the bad idea of this campaign to have asked the women of (Taliban-ruled) Kabul who are fighting precisely not to have this veil.’ 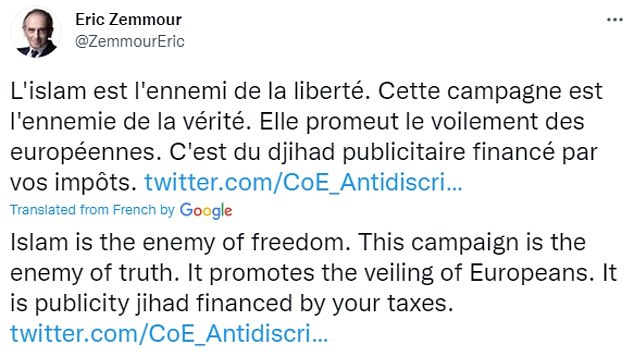 The online campaign, co-financed by the European Union, touched a nerve among the right in France including prospective candidate Eric Zemmour

Macron’s government also weighed in, saying it had urged the Council of Europe to pull the campaign.

France is one of the 47 member states of the Council which acts as the guardian of the European Convention on Human Rights.

‘I was profoundly shocked,’ French Minister for Young People Sarah El Hairy told LCI TV. ‘It is the opposite of the values that France defends, it is promoting the wearing of the hijab.

‘This is to be condemned and because of this France made clear its extremely strong disapproval and hence the campaign has now been withdrawn as of today,’ she said late Tuesday, confirming Paris issued an official protest through diplomatic channels.

‘We have taken down these tweet messages while we reflect on a better presentation of this project,’ a Council of Europe spokesman told AFP.

‘The tweets reflected statements made by individual participants in one of the project workshops, and do not represent the views of the Council of Europe or its Secretary General’ Marija Pejcinovic Buric, he added.

The Council did not confirm that the pulling of the campaign was a direct result of French pressure.