The second stage of the Parramatta light rail will be the NSW government’s signature infrastructure commitment in this month’s state budget, with more than $600 million set aside for the long-touted project.

The Herald on Wednesday revealed the government would push ahead with the second stage of the light rail, despite receiving advice from its independent infrastructure body to delay the project. 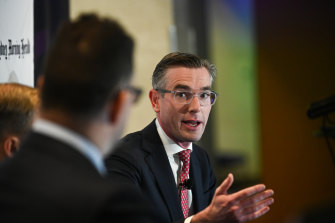 Perrottet said the second stage of the light rail project, which will link Camellia to Sydney Olympic Park, was chosen to proceed despite that advice, given the amount of development in the area.

“There’s going to be much greater growth in western Sydney than there is in the Northern Beaches,” Perrottet told the Herald’s Infrastructure Summit on Wednesday. “If you look at western Sydney, it’s booming.”

The government will put several other major infrastructure projects on ice, including the Beaches Link and the second stage of the M6 in Sydney’s south, amid rising construction costs and labour shortages.

Asked during a Q&A session whether he would like to see more development on the Northern Beaches ahead of the now-delayed Beaches Link being constructed, Perrottet said “for sure”, though suggested Infrastructure Minister and member for Pittwater Rob Stokes may not agree.

Perrottet was initially tight-lipped about the amount of money the government would commit to the second stage, but a social media bungle resulted in the premier’s Twitter account announcing the $600 million figure before the tweet was deleted.

While the premier did not confirm that figure during the press conference, he later tweeted: “I’ve decided to end the suspense … due to popular demand … $602.4m will be committed in the budget to moving ahead with the Parramatta Light Rail Stage 2 megaproject.”

NSW Transport Minister David Elliott said he expected a local component to the manufacturing of the trams which would be used on the light rail.

While delaying several major projects, Perrottet insisted that the government would continue to invest tens of billions in transport infrastructure at a rate that was more fiscally responsible. 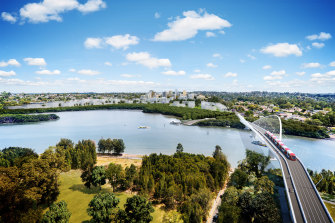 An artist’s impression of the second stage of the light rail line over Parramatta River between Melrose Park and Wentworth Point.Credit:PAYCE

“There will no doubt need to be adjustments in sequencing and prioritisation – the advice from Infrastructure NSW on that front is clear. We need to be adaptable to capacity in the market,” he said. “And we will also need to make sure that the projects we select are the right projects, at the right time, delivering the best value for the people of our state.”

Perrottet said he would be lobbying the new federal government to be strategic in its immigration policies and target skilled migrants who could fill current the labour shortfalls that were contributing to the megaproject delays.

“This is top of the list in terms of what needs to be addressed. The impact of international borders being closed for two years is now having a substantial impact,” he said. “We need the Commonwealth government to sit down and appreciate that this is a real challenge facing every state and the country.”

The Infrastructure NSW report, which was brought forward at the request of former premier Gladys Berejiklian due to COVID-19, cites both the pandemic and an overheated construction market as the two biggest risks for the state government charging ahead with big builds.

Our Breaking News Alert will notify you of significant breaking news when it happens. Get it here.