Thousands of student apartments are sitting empty across Melbourne, with the loss of international students cutting occupancy rates by 80 per cent, amid fears the sector is yet to hit the bottom.

Melbourne’s CBD has already lost 17.2 per cent of its residential population with 8900 fewer international students as a result of the pandemic, according to analysis by Dr Peter Hurley from the Mitchell Institute. 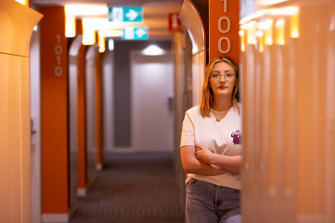 Dr Hurley used data from Home Affairs and the Australian Bureau of Statistics to estimate the number of international students has also dropped by 4660 in Clayton, 4550 in Carlton, 2100 in North Melbourne, 1770 in Southbank and 1590 in Box Hill as of this month.

Although optimistic about the medium to long term, Dr Hurley said 2021 would probably be worse for the sector than 2020 because international students who finish their studies are not being replaced.

“The bad news is the worst is yet to come with international students,” Dr Hurley said. “The good news is, I think, in the longer term there’s no reason why this shouldn’t renew.”

In the meantime, thousands of rooms in purpose-built student accommodation have been mothballed.

At the same time, Scape’s stock has increased because construction has finished on 1000 new bedrooms for what was a booming industry.

Scape has not reduced its rates — which are up to $490 a week including amenities — but Mr Carracher said about 20 per cent of occupants were international students in crisis staying for nothing or contributing a nominal price to cover utilities.

Some students stranded overseas were paying as little as $20 a week for Scape to store their belongings.

Tomas Johnsson, the chief executive officer of UniLodge, said the provider had offered up its empty accommodation for other needs but that those offers had not come to fruition.

UniLodge has pitched itself for hotel quarantine, preferably for international students, as well as for affordable housing or frontline workers needing temporary accommodation.

Mostly, UniLodge and the rest of the industry want international students back.

“The thing that we are all missing is a coordinated effort across federal, state and industry,” Mr Johnsson said.

“But we are agnostic to the solution. We will work with anything and anyone to make a good solid inroad.”

While the providers have lost international tenants, the market has shifted slightly towards domestic students. 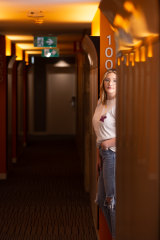 Tiarna Condren moved into the accommodation just this week.Credit:Simon Schluter

Tiarna Condren, who is starting her first year of journalism at RMIT, moved into Scape housing on Little La Trobe Street with a scholarship on Wednesday after moving from the Murray region of NSW.

“I was always looking into student accommodation, moving from a rural town like Deniliquin, because of the community, mainly, and having that kind of close-knit group of people,” Ms Condren said.

She said the residents seemed to be fairly spread out but that she was glad to be living in a building with 150 people in 750 rooms.

“I’ve only seen one person on my floor so far,” Ms Condren said.

Deputy lord mayor Nicholas Reece said higher education had delivered a “modern-day gold rush”, with City of Melbourne data showing the average number of beds in purpose-built student accommodation rocketed from 82 to 579 between 2011 and 2018.

But Cr Reece said COVID-19 could be an opportunity to bring in better regulations for new developments.

Belle Lim, president of the Council of International Students Australia, said many international students who stayed in the country found themselves in financial stress and were forced to move into cheaper, often “unacceptable”, options.

She wanted to see more progress bringing back students who have been stuck overseas. Asked whether that could include using student accommodation to quarantine them, she said CISA had no public health expertise to comment.

“We just want to make sure that whatever process it is, it is safe for students and it is also safe for the community,” Ms Lim said.

“It’s so distressing for students who are stuck overseas.”

Mr Carracher of Scape criticised the Victorian government for failing to develop a logistical plan as requested of all states by the federal government.

Premier Daniel Andrews on Tuesday warned he would not rush to revive the state’s biggest service-based export, saying it would be “naive” to believe that swathes of international students would land in Victoria “any time soon”.

The sector this month outlined its hotel quarantine plan in a letter to the states and federal government.

Federal Education Minister Alan Tudge said there had not been any new proposals from the Victorian government on international education.

“Of course we want to see international students return to Australia, but we need to make sure it’s done safely and without impacting Australians who want to return home,” Mr Tudge said in a statement.

“If a state or territory government puts forward a proposal that includes quarantine arrangements above and beyond their existing ones and they get the tick off from their chief medical officer then we would look at that.”