Senior nursing leaders have called on the government to update ‘fundamentally flawed’ PPE rules in hospitals as fears grow among healthcare workers that the equipment is inadequate.

A Royal College of Nursing-commissioned report challenged the evidence behind the guidelines for personal protective equipment (PPE) and suggested the review behind them failed to meet World Health Organisation (WHO) standards.

Report authors Professor Dinah Gould, an honorary professor of nursing, and Dr Edward Purssell, both of London’s City University, said the guidance ‘failed to consider airborne infection’ as a key way the virus is transmitted, instead focusing on spreading through touch. 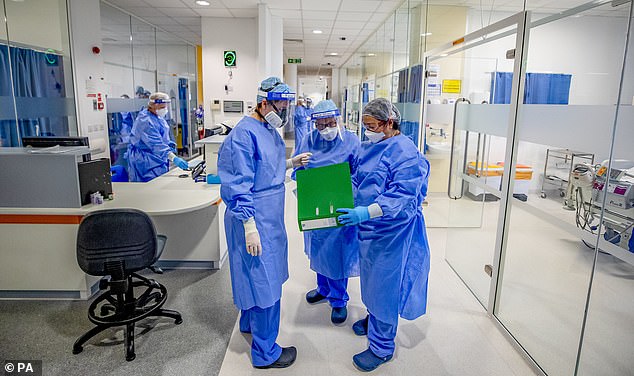 A report commissioned by the Royal College of Nursing said guidance on PPE in hospitals is based on ‘outdated’ evidence and urgently needs revision. Pictured: Health workers in full PPE

The authors say in their report: ‘UK IPC (infection prevention and control) guidelines to prevent the spread of Covid-19 in health care settings and the rapid reviews of the literature on which it was based still identify droplet spread and hands as the major route, based on early advice from the World Health Organisation.

‘Updated evidence indicates that aerosol spread is much more significant and the original advice from the WHO has been superseded.

‘The UK guidelines are still based on this outdated evidence, however. They urgently need thorough revision and replacing.’

Airborne transmission is where tiny droplets of saliva from people talking, calling out or coughing can remain suspended in the air and it can be a particular problem in poorly-ventilated rooms, research suggests.

The Government has issued guidance on the importance of ventilation in indoor spaces, but is failing to act in hospitals, it was claimed.

The RCN said the UK Government’s guidelines do not detail the importance of ventilation and that higher-grade personal protective equipment must only be provided in certain high risk settings like intensive care, but that it is up to individual health trusts to decide whether or not to provide them more widely to other staff. 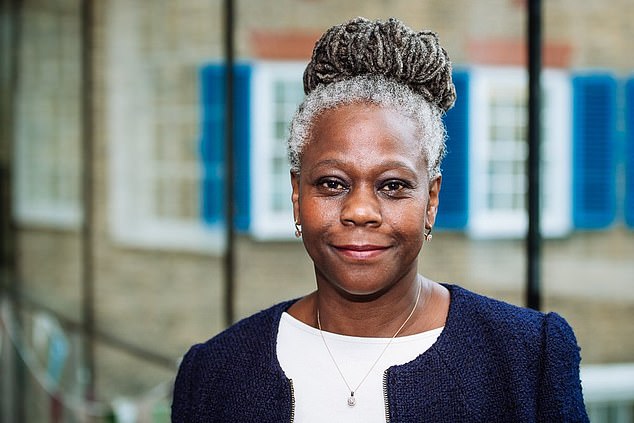 Dame Donna Kinnair, the RCN’s chief executive and general secretary, said concern over the situation has been raised by a community nurse who works at a trust in England.

The nurse, who has not been named, said: ‘I’m at my wits’ end. I’ve had Covid-19 before and really don’t want to get it again.

‘I’ve got FFP3 face masks but my trust won’t let me wear them. They say either wear the standard surgical mask or you can’t work.

Dame Donna, who called for an official review, said: ‘Healthcare workers need to know everything possible is being done to keep them protected.

‘It is inadequate to say they have masks if they aren’t fit for purpose. Staff are scared for themselves and their families and left any longer it’ll turn to anger.’

Government has said PPE recommendations were updated in January and agreed by an ‘expert group of clinicians and scientists based on clinical evidence’. Pictured: standard surgical mask

At least 988 UK health and social care workers had died in the pandemic by the end of January, according to RCN figures which does not include deaths in Northern Ireland where no data was available.

The RCN believes the number could now be higher and that some of these staff will have caught Covid-19 at work.

A Department of Health and Social Care spokesman said: ‘The safety of our NHS and social care staff has always been our top priority and we continue to work tirelessly to deliver PPE to protect those on the frontline.

‘PPE recommendations (were) updated in January 2021, and are agreed by an expert group of clinicians and scientists from across all four UK nations based on clinical evidence.

‘The guidance on PPE is kept under close review.’

Social distancing, increased decontamination of the equipment and good ventilation are among the measures that need to be adopted to reduce the risk of transmission, the report said.

The separation and segregation of patient and staff within the high, medium and low risk pathways plus hand hygiene is also suggested.