An emotional Nicola Sturgeon today announced that people in Scotland will be allowed to hug their loved ones again from Monday next week.

The Scottish First Minister said rules on physical contact will be eased to allow people to hug friends and family when in a private house or garden.

A review will take place over the next three weeks to determine whether the restrictions could be eased in other settings.

However, Ms Sturgeon urged Scots to ‘use careful judgement’ as she warned ‘close physical contact does still carry risk’.

She suggested people should avoid hugging loved ones who may be vulnerable and to ‘limit the overall number of people that you are choosing to have close physical contact with’.

The move was one of a number of rules to be loosened by Ms Sturgeon as she said almost all of mainland Scotland will move from Level 3 to Level 2 of coronavirus restrictions on May 17.

Her announcement came one day after Boris Johnson announced hugging will be allowed among friends and family in England from the same date. 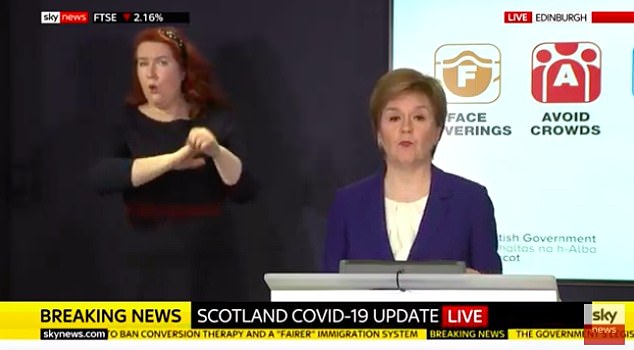 An emotional Nicola Sturgeon today announced that people in Scotland will be allowed to hug their loved ones again from Monday next week. 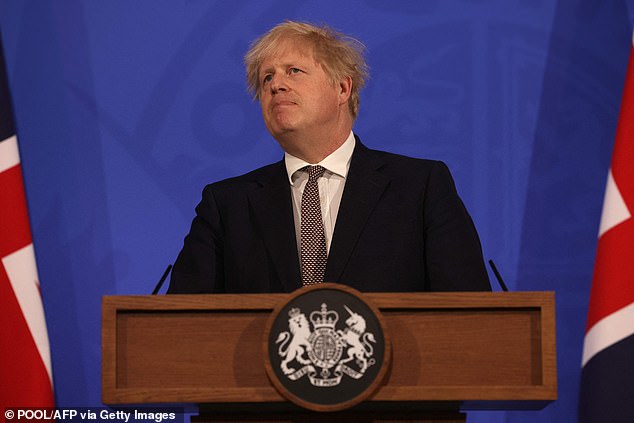 Addressing a coronavirus briefing in Edinburgh, Ms Sturgeon said: ‘From Monday if you are meeting friends and family, within the permitted limits of course, either indoors in a private dwelling, a house or in your garden, our guidance will say that it is no longer necessary to maintain physical distancing.

‘Which means, and I actually feel a wee bit emotional saying this, that from Monday as long as you stay within permitted limits you can hug your loved ones again.

‘I know how desperate we all are for this so I don’t intend to immediately pour cold water on it, don’t worry, but there are two further points I really need to make.

‘Firstly, it remains vital to be cautious and to ease these restrictions carefully so for the next three weeks at least the easing of the guidance on physical distancing will apply to permitted gatherings in our own homes and gardens only.

‘However, over that period we will also be conducting a wider review of the need for physical distancing in public indoor places and we will set out the conclusions of that at the next review point.

‘And secondly, and this is perhaps the more difficult point, please use careful judgement.

‘Close physical contact does still carry risk, I have got to be very clear with you about that, so if you have loved ones who are vulnerable for any reason, please still be careful and limit the overall number of people that you are choosing to have close physical contact with.’

Ms Sturgeon also announced that people will be able to meet outdoors in groups of eight from up to eight households rather than the groups of six from six households currently.

Meeting inside a private home will also be allowed again, including overnight stays as all of mainland Scotland, with the ‘highly probable’ exception of Moray, will move from Level 3 to Level 2.

Moray is expected to remain in Level 3 following a surge in coronavirus cases and an increase in hospital admissions.

Ms Sturgeon said the success of the vaccination programme and adherence to lockdown rules allowed her to ease restrictions.

‘It means firstly that we will be able to meet outdoors in groups of eight from up to eight households rather than in groups of six from six households as is the case now,’ she said.

‘And even more significantly we will be able from Monday to meet in each other’s homes and that includes for overnight stays.

‘Now, it was initially intended that at level 2 up to four people from no more than two households could meet indoors.

‘However, we consider that it is possible now to go slightly further than that so from Monday up to six people from three households will be able to meet indoors in each other’s houses.

‘This is still a cautious change but it is also a hugely important one. It is almost eight months now since most of us have been able to meet in each other’s homes and it has been even longer than that for those of us living in Glasgow and Lanarkshire.’