The Scottish government was forced to drop plans to axe jury trials today as its coronavirus bill jumped its first parliamentary hurdle.

The SNP administration confirmed it had dropped the measure after an outcry from opposition parties and senior lawyers following the publication of the Coronavirus (Scotland) Bill on Tuesday.

The bill originally proposed trials going ahead without juries to ‘ensure that criminal justice systems can continue to operate during the coronavirus restrictions’.

But the move was branded ‘draconian’ by the Scottish Criminal Bar Association and The Law Society of Scotland insisted there was not ‘sufficient justification’ for ending the centuries-old legal principle.

First Minister Nicola Sturgeon described it as an ‘exceptional measure to deal with exceptional times’ but as well as being criticised by legal groups both SNP MP Joanna Cherry – a QC – and UK Cabinet minister Michael Gove voiced concerns.

It came as Ms Sturgeon revealed that the nation’s coronavirus death toll had risen to 76 this afternoon, up 16 from yesterday.

In a further blow to the nation, a string of summer festivals in Edinburgh have been cancelled for the first time in more than 70 years, in a blow to the Scottish economy running into the hundreds of millions of pounds.

Ms Sturgeon told MSP in Edinburgh: ‘We are now at the stage of this epidemic, as we expected to be, when the number of cases is rising rapidly. 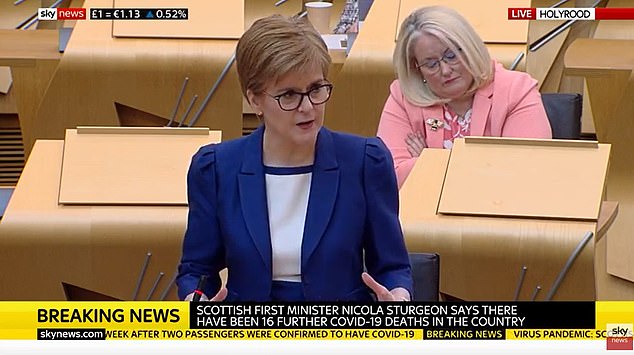 It came as Nicola Sturgeon revealed that the nation’s coronavirus death toll had risen to 76 this afternoon, up 16 from yesterday 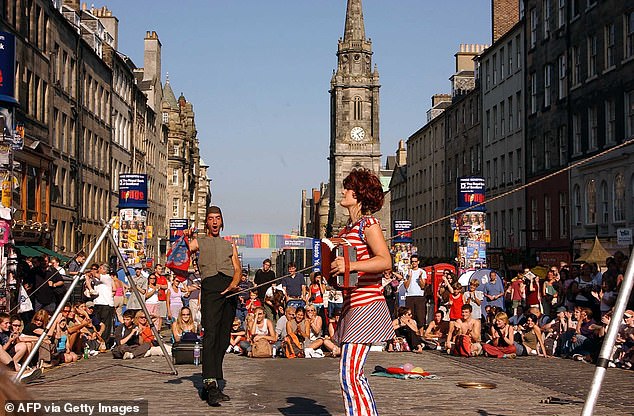 In a further blow to the nation, a string of summer festivals in Edinburgh have been cancelled for the first time in more than 70 years, in a blow to the Scottish economy running into the hundreds of millions of pounds

‘And unfortunately that means the numbers becoming seriously unwell and dying are also sadly rising.

‘Of course, we hope that the lockdown measures we are asking people to comply with will have a marked effect on the spread of the virus and that we will see a slowdown in the next few weeks.

‘However, given that these measures take some time to have an impact, it is too early to draw any firm conclusions yet.’

Constitutional Relations Secretary Mike Russell announced to MSPs that the Scottish Government is now withdrawing that section of the legislation ‘in order to allow an intensive and wide-ranging discussion by all interested parties, including victims, whose voice has not yet been fully heard, about the right way to ensure that justice continues to be done in Scotland’.

He confirmed another Bill will be brought before Holyrood to address necessary changes to the justice system during the pandemic.

MSPs voted to pass the amended bill through to stage two unanimously.

Mr Russell also stressed the temporary nature of the measures, which can only be legally enforced for the next 18 months, a term that would include the need for Parliament to agree to two separate six-month extensions.

He called called for consensus between political parties to push the Bill through Parliament in a single day, saying: ‘Our unity in these matters is important.

‘We need to work together if we are to defeat the greatest challenge we have faced as a nation for many generations.

‘Unity is worth working for, no matter how hard it is.’

The political move came as the festival cancellations were announced.

Together, the five August festivals comprise more than 5,000 events across Scotland’s capital each summer featuring more than 25,000 artists, writers and performers from 70 countries and attracting audiences of 4.4 million.