An NHS worker died in her husband’s arms struggling for breath after a desperate battle with coronavirus, it emerged today.

Locality administrator Laura Tanner, 51, passed away at home in Basildon, Essex, as she waited with husband Kevin for paramedics.

Two other healthcare staff were revealed to have died from the infection, bringing the total death toll for NHS workers and care staff to at least 134.

Jenny Esson, a training co-ordinator from Cambridge, and Filipino care home nurse Larni Zuniga have fallen victims to the virus.

More than 20,000 people in Britain have died from the bug in hospitals, out of more than 152,000 who have been infected. 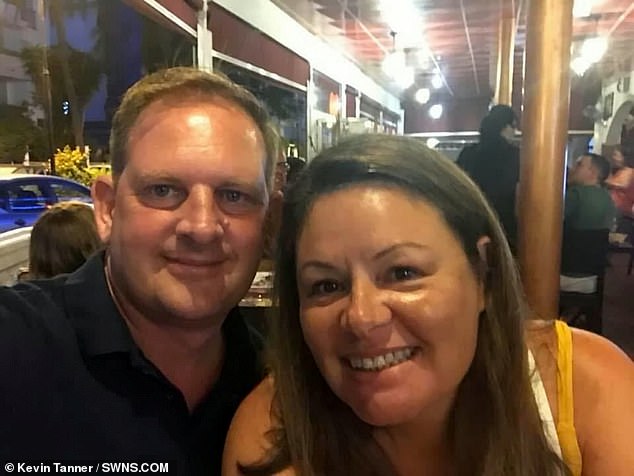 Locality administrator Laura Tanner, 51, passed away at home in Basildon, Essex, as she waited for paramedics to arrive with husband Kevin (pictured together) 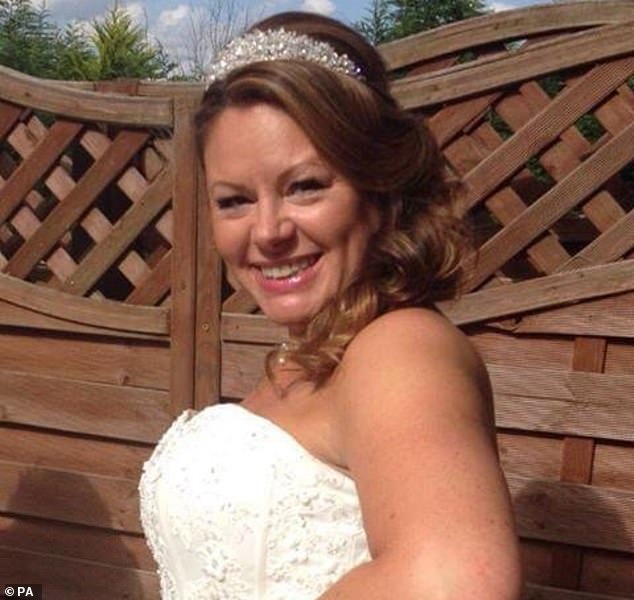 Kevin, a crane operator in London, said: ‘It was horrific – I still have nightmares. Laura’s youngest son was in the house in his room’ 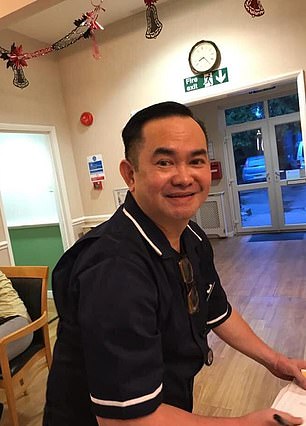 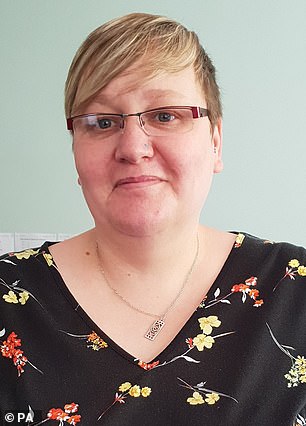 Jenny Esson (right), a training co-ordinator from Cambridge, and Filipino nurse Larni Zuniga (left) were the others to have fallen victim to the virus 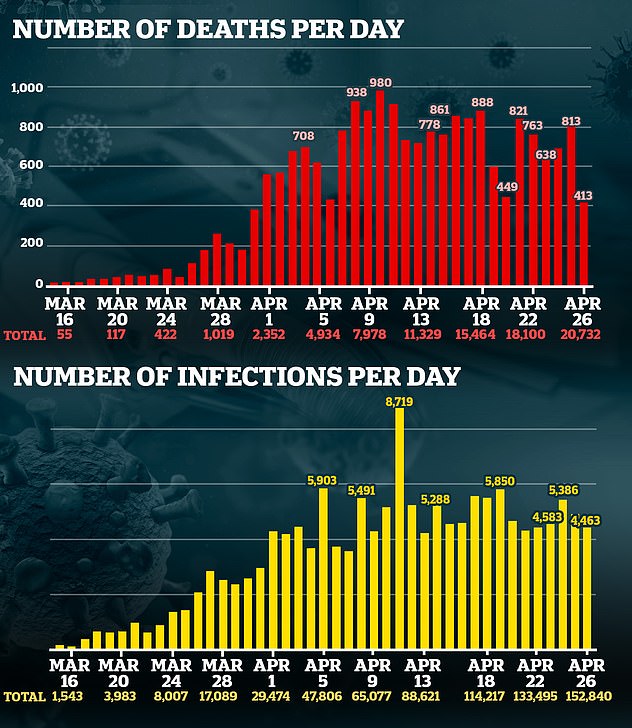 More than 20,000 people in Britain have died from the bug in hospital, out of more than 152,000 who have been infected

Laura and Kevin, as well as Laura’s youngest son Kian, 13, had fallen ill with ‘nasty symptoms’ less than two weeks earlier and had followed all government advice.

Kevin, 49, recovered within days but Laura deteriorated, with her temperature soaring to more than 40 degrees.

By March 27, Kevin was forced to call paramedics for his wife, who stayed at home until her temperature lowered.

But five days later on April 1, Laura – who had worked for Basildon and Brentwood Clinical Commissioning Group for more than a decade – passed away.

Kevin, a crane operator in London, said: ‘It was horrific – I still have nightmares. Laura’s youngest son was in the house in his room. 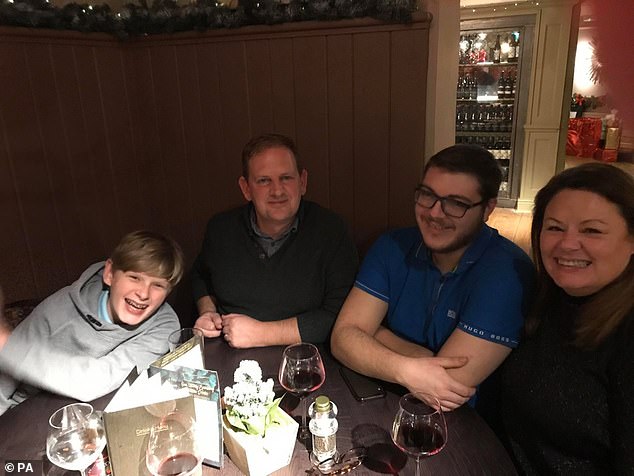 ‘Laura hadn’t been able to get out of bed on most days, or eat, but this day she had got up and was fumbling around downstairs.

‘So I went down to check on her and it was like she was having a bad panic attack. She was struggling for a breath and was asking me to calm her down.

‘I called 999 and got Laura a paper bag and sat with her but her breathing just got shallower and shallower. Her eyes went small and I could see it, she was going and then she passed.

‘Paramedics came within 10 minutes and four of them worked on her for about an hour then took her away.

‘Around 45 minutes later two of them came and knocked on the door and said ”we are really sorry, she’s gone”.’ 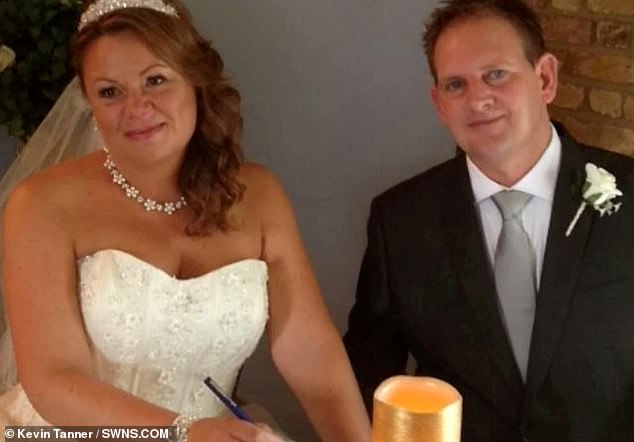 Kevin (right), 49, recovered within days but Laura (left) deteriorated, with her temperature soaring to more than 40 degrees

There have been mounting calls for greater protection for our NHS frontline heroes as a poll found access to personal protective equipment has been getting worse.

The Royal College of Physicians said those working in high-risk areas still could not always access long-sleeved disposable gowns and full-face face visors.

It said the shortages of this personal protective equipment had worsened in the last three weeks.

In a survey of 2,129 college members last Wednesday, 27 per cent reported being unable to access the kit they needed for managing COVID-19 patients.

That’s compared with just over a fifth (22 per cent) of doctors in a similar poll on April 1.

She worked for Cambridgeshire and Peterborough NHS Foundation Trust and became unwell while working from home.

Ms Esson, who was a training and development co-ordinator in the trust’s Recovery College, had underlying health conditions, the trust said.

The Recovery College offers learning courses to convey messages of hope, empowerment and opportunity, the trust said on its website.

Tracy Dowling, the trust’s chief executive, said: ‘Jenny was one of the first people I met when I joined the trust and I was always struck by her energy, charisma and shining smile.

‘She loved CPFT and, through her work in the Recovery College and in peer support, she made a tremendous difference to so many people’s lives. We will truly miss her.’

Ms Esson’s family said in a statement: ‘Jenny was always at the very heart of our family.

‘She was charismatic, loving, passionate, outrageously funny and loved to laugh. She was fiercely protective of us and always proud to provide for us, look after us.

‘She was happiest at home and was passionate and proud of her work. If Jenny saw something she felt was wrong she wouldn’t just moan about it.

‘She hated social injustice and stigmatising of any kind. She was my hero, my soulmate, my everything.

‘She was amazing mum to our girls who love her with all their hearts.’

Another survey has found one in four GPs have seen coronavirus patients face-to-face without PPE due to the dire shortages.

In it, they call for an urgent meeting with Lord Paul Deighton to fix ‘the impossible situation’ clinicians face, ‘where they have to choose between protecting their own health, or their patients’.

Care home nurse Larni Zuniga, 54, was treated in intensive care at St Thomas’ Hospital in London at the same time as the Prime Minister, who is 55. 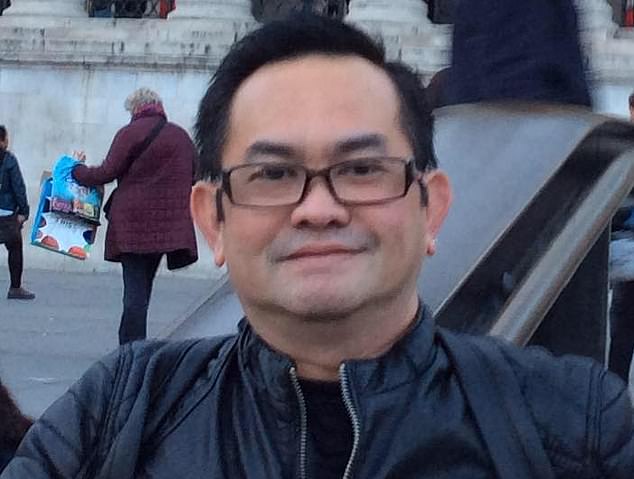 Originally from the Philippines, the married father had worked in Britain for 12 years and had not seen his family for five years.

He was given UK citizenship in February and had hoped to bring his wife Edith to Britain in June.

His cousin Christian, an NHS theatre nurse, said: ‘Larni was a true professional, who touched the lives of many. He made a tremendous difference to a lot of people’s lives.’

Mr Zuniga worked as a senior nurse at the Surrey Hills care home near his home in Godalming. 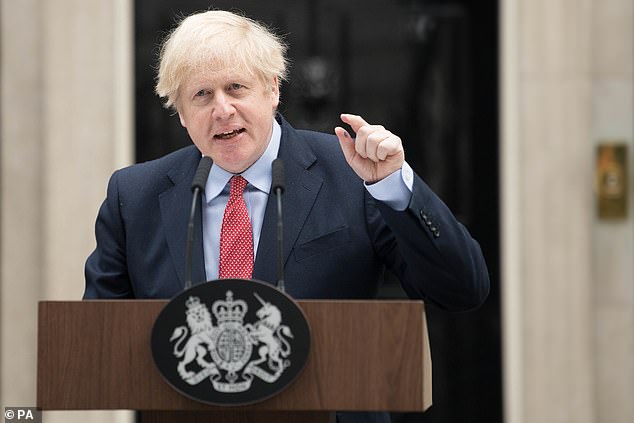 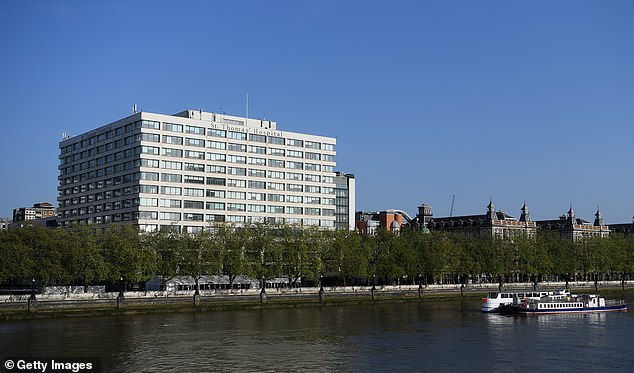 He was a Christian and regular attendee at the Jesus Is Lord Church in Oxford which he travelled two hours to get to every Sunday.

His friend Arnold Barrientos said: ‘Larni had absolutely sacrificed a lot for his family.

‘He worked hard and he battled hard times of not seeing his family just to ensure a comfortable life for them.’

‘He influenced a lot of people with his Godly counselling and loving, warm personality.

‘He had so many unfulfilled dreams concerning his family due to this early demise.’

Mr Barrientos has organised a fundraiser on GoFundMe for Mr Zuniga’s funeral, which has so far raised more than £8,000 of its £10,000 target.