The NSW Ombudsman says naked strip-searches performed on three youth in view of CCTV cameras at a juvenile detention centre were unreasonable and should be made illegal in the future.

Three young people climbed onto the roof of the Frank Baxter Youth Justice Centre in Kariong, near Gosford and refused to come down. They had access to building materials and tools, and made “serious threats to the safety of staff”, a report into the November 24, 2019 incident, tabled to NSW Parliament on Tuesday found. 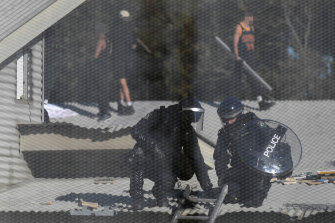 Detainees and riot police during a siege at Frank Baxter Juvenile Justice Centre on July 22, 2019, four months before the incident the Ombudsman investigated. Credit:AAP

The officers coaxed the three detainees off the roof without force, handcuffed them and conducted a pat-down search. No force was used and no weapons were found.

However, the detainees were then taken to cells where they were stripped naked in front of CCTV cameras.

Detainees were forced to remove all items of clothing, lift their scrotums and penises, and in one instance bend over and part their buttocks for inspection with a torch.

While the searches were found to be technically lawful, the Ombudsman found they were unreasonable, oppressive and disproportionate to the risk posed, and wrong to be performed in view of cameras.

No adverse findings were made about the officers who performed the searches.

“Given the nature of any possible items that might reasonably have been suspected to be concealed by the detainees, the search need not have been as extensive or invasive as it was,” the report found.

“There was no reason why, after each detainee’s clothes had been removed and examined, the detainees then needed to have their genitalia or buttocks area inspected.

“It was wrong to strip search the detainees in view of CCTV cameras.”

The Ombudsman recommended the government should change the law to prevent young people in detention from ever being subjected to fully naked strip-searches.

In 2019 there were several instances of violence at the centre, including a riot that ended in a 21-hour siege.

The reason the Ombudsman investigated the issue was because Inspector of Custodial Services – an independent statutory body – reported on January 15 last year that corrective services officers “may have carried out unauthorised strip-searches” of the three young detainees.

During the investigation, the Department of Communities and Justice submitted the searches were not oppressive because they were lawful and involved a legitimate purpose to search for contraband.

In response to a draft report in April, Corrections Minister Anthony Roberts and then communities minister Gareth Ward said “an apology to the detainees would be inappropriate”, indicating the Ombudsman recommended an apology in the draft.

There is no mention of an apology in the final report.

Communities Minister Alister Henskens declined to answer questions including whether the government would accept the recommendations. His spokesman referred the Herald to a statement from the Department of Communities and Justice.

“The searches were conducted in compliance with all policies and in an area away from public view,” a spokeswoman said.

“Since this incident, [Corrective Services] NSW and Youth Justice have revised their operational protocols so that partially clothed body searches will be undertaken by youth justice officers.”