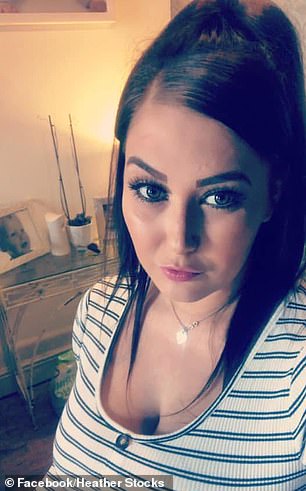 Heather Stocks, pictured, gave birth to her baby son in an isolated room at Diana, Princess of Wales Hospital in Grimsby

A mother was forced to give birth alone without her partner in an isolated hospital room after she falsely tested positive for coronavirus.

Heather Stocks delivered her baby son, Vinnie, at Diana, Princess of Wales Hospital in Grimsby, North East Lincolnshire with only midwives allowed in the room.

Her partner, David Vickers, had to meet his son at the hospital doors the next day after she had been discharged.

Heather was induced after having a growth scan because her baby’s movements were less than usual.

But before she could have her scan, she had to have a routine Covid-19 test. She did not have any symptoms.

She said: ‘A midwife told me that my Covid test had come back positive.

‘At this point, I was distraught. I had no symptoms whatsoever and they couldn’t understand it.’

Following this, Heather was placed into an isolated room and was told neither her partner or her mother could come up to see her.

The only people allowed in the room with her were the midwives, who had to be dressed in full personal protective equipment (PPE).

Heather said: ‘I was completely alone with no one. My partner wasn’t allowed up to see me and neither was my mum.

‘I birthed my baby boy with just me, a midwife and a student midwife. They were not allowed to leave the room until I gave birth and they had filled in all my paperwork.’ 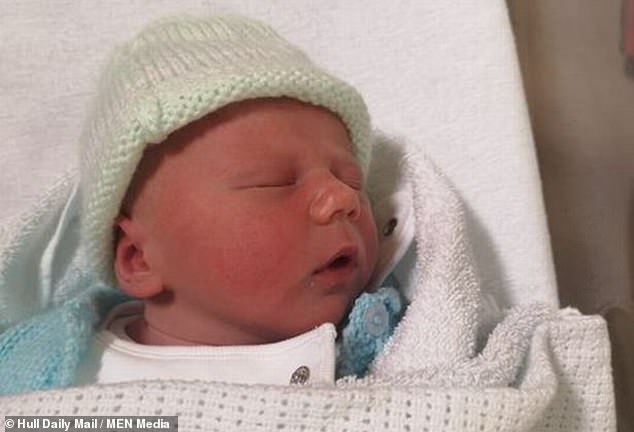 Heather’s partner, David Vickers, had to meet his son Vinnie (pictured above) at the hospital doors on August 28 – the next day after she had been discharged

Heather’s paperwork was placed into a plastic bag and taken out of the room.

She said she ‘wasn’t allowed to be touched for a period of time’ after giving birth to her baby boy.

Heather was discharged from hospital on August 28, when her partner was finally able to meet his son for the first time.

David would have been able to accompany Heather through the birth had she not falsely tested positive for Covid-19.

She said: ‘When they confirmed my partner wasn’t allowed up because I was positive, he had to meet a midwife downstairs at the doors.

‘He didn’t see me or his son until I was out the day later.’

She added: ‘They told me it was a false positive and I no longer had to isolate. I was so confused I couldn’t rest and went to ring them.’

Heather said her Covid-19 test gave a ‘borderline number’ and was sent to another laboratory for further testing.

This was when her test came back with a negative result. 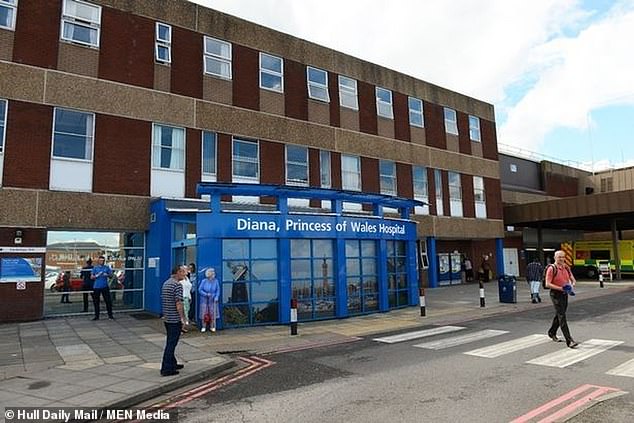 Heather said she was later told by the Diana, Princess of Wales Hospital (above) in Grimsby that her test result was a false positive and that she no longer had to isolate

She said: ‘As you can imagine I felt like my world was turned upside down. I have birth to my son alone and isolated to then be told it was false.

‘How many more people has this happened to, where they are testing positive and it comes back as false?’

Chief Nurse Ellie Monkhouse said: ‘Going through labour and delivery without a birthing partner is not a situation we want any mother to find themselves in and we are sorry this was the case for this lady.

‘I can appreciate just how difficult it must have been for her and her partner, especially given the false positive result.

‘However, we are in the midst of a pandemic and we have to do everything we can to protect our staff and patients and to prevent further transmission of the virus.

‘Our clinical teams follow the national guidance and have to act on the information they have in front of them at the time and in the best interests of our patients and staff.’