THIS is the harrowing moment the French coastguard put out a mayday call as dozens of migrants sank in the Channel.

At least 27 people, including five women and a little girl, drowned in the deadliest incident since the crisis began after the boat sank off the northern port of Calais on Wednesday.

A massive rescue operation was launched in French waters, with at least three helicopters and three boats deployed to take part.

In a desperate mayday call obtained by Sky News, the French Coastguard can be heard urging anyone in the area to join the search.

They add: "All ships in this area are requested to have a sharp lookout to proceed to this area, to take contact and report any information to Griz-Nez MRCC."

At a news conference in Calais, Mr Darmanin described the dinghy which sank as "very frail" and said it was "like a pool you blow up in your garden".

With 34 people believed to be on the boat, the vessel ran into trouble shortly after casting off from the French shoreline.

An emergency search was sparked when a fishing boat sounded the alarm after spotting several people unconscious in the water.

One of the French lifeboat workers, Charles Devos, described seeing "a flat, deflated inflatable boat with the little air that remained helping it float" surrounded by bodies.

Vessels from HM Coastguard at Dover, along with the Border Force's ship BF Hurricane, responded to the Mayday and arrived within around 45 minutes, MailOnline reports.

The joint search and rescue operation by the French and British authorities was finally called off late on Wednesday.

Following the sinking, Dunkirk prosecutors opened a criminal investigation for "manslaughter" and "assistance with illegal immigration in an organised gang".

He said: "1,500 people have been arrested since the start of January, and four of them today. We suspect that they were directly linked to this particular crossing."

The minister said "the criminal nature of the smugglers who organise these crossings cannot be condemned enough".

It follows claims that people smugglers had organised the passage of the overcrowded boat, charging thousands to those on board to get to Britain.

Boris Johnson, who chaired an emergency meeting of the COBRA ministerial group, said he was "shocked, appalled and deeply saddened" by the loss of life in the Channel – one of the world's busiest shipping lanes.

He said the deaths "underscored how dangerous it is" to cross from France.

Speaking to reporters at Downing Street, the PM added: "What this shows is that the gangs who are sending people to sea in these dangerous crafts will literally stop at nothing.

"But what I'm afraid it also shows is that the operation that is being conducted by our friends on the beaches, supported as you know with £54 million from the UK to help patrol the beaches, the technical support we've been giving, they haven't been enough.

"Our offer is to increase our support but also to work together with our partners on the beaches concerned, on the launching grounds for these boats.

"That's something I hope will be acceptable now in view of what has happened."

He suggested the French government had not always approached the problem in the way the British believed it should.

"We've had difficulties persuading some of our partners, particularly the French, to do things in a way that we think the situation deserves," he said.

"I understand the difficulties that all countries face, but what we want now is to do more together – and that's the offer we are making."

Labour leader Sir Keir Starmer tweeted: "For lives to be lost in such dangerous and desperate circumstances is a devastating and heartbreaking tragedy.

"The UK Government, France and the wider international community have a duty to prevent people from being forced into such peril."

"France will not allow the English Channel to turn into a graveyard," he said in a statement.

DISASTER IN THE CHANNEL

According to the French Government, the boat flipped over shortly after 2pm.

A spokesman for the Interior Ministry in Paris said: "Around 2pm on Wednesday, a fisherman reported the discovery of about fifteen bodies floating off Calais."

"The disaster in the Channel is a tragedy," he said.

"My thoughts are with the many missing and injured, victims of criminal smugglers who exploit their distress and misery."

The number of migrants who have reached the UK by boat this year is now more than three times the total for the whole of last year.

Pierre-Henri Dumont, the French MP for Calais, said the Channel risks becoming the new Mediterranean Sea for migrant crossings unless the UK and France work together to find a solution.

He told Sky News: "We all need, both sides of the Channel, to stop making migrants an internal argument with internal policies and try to figure out how to find a solution.

"The Channel right now is becoming the new Mediterranean Sea, it's like an open sky graveyard. We must find a way to end it."

Several records have been broken in recent weeks as more continue to make the dangerous journey to Britain.

The current record is 1,185 landing in Britain in a single day, as Priti Patel faces mounting pressure to get a grip on the crisis.

Tom Davies, Amnesty International UK's refugee and migrant rights campaign manager, said the charity was "deeply saddened by the loss of these lives".

He said: "How many more times must we see people lose their life trying to reach safety in the UK because of the woeful lack of safe means to do so?"

Enver Solomon, chief executive of the Refugee Council, added: "This is a humanitarian disaster that should never have happened.

"It's incomprehensible that so many lives have been lost by people on a desperate and harrowing journey to Britain who were just trying to find safety."

Earlier this week, the Home Secretary said an offer of Border Force guards and cops to beef up Channel patrols has been snubbed.

She made the dig during a stormy grilling in the Commons over the small boats crisis that's infuriating Tory MPs.

Last week it was revealed only five asylum seekers out of 24,000 who've made the treacherous crossing this year have been returned.

Dover MP Natalie Elphicke said the crisis has "gone on for too long".

"We need to stop further loss of life this winter," she said.

"It’s time to take swift and effective action to end this crisis once and for all."

It comes after around 40 migrants were pictured launching dinghies into the English Channel this morning in a fresh attempt to reach Britain.

The migrants, including at least five children, were spotted going into the water from a beach near Wimereux, just a few miles north of Boulogne-sur-Mer, in the early hours of the morning.

Multiple boats of people were also seen landing on Dungeness, Kent this afternoon.

Bella Sankey, director of charity Detention Action, said she was "truly saddened" by the deaths and accused government failures of allowing the current crisis.

"A cross-party group of MPs have put forward a humanitarian visa proposal which would provide a safe route and save lives and we hope that parliamentarians will vote this into legislation by Christmas," she added.

More than 4,000 have made the journey in November so-far, the most ever in a single month, and the surge shows no sign of slowing down.

French officials revealed details for the first time of how they have spent £9million from the British taxpayer, agreed as part of a £54million deal in the summer.

A spokesman for the interior ministry said: "More than 100 mobile vehicles are being delivered on the ground for patrols and arrests, with equipment adapted to the specific nature of the terrain." 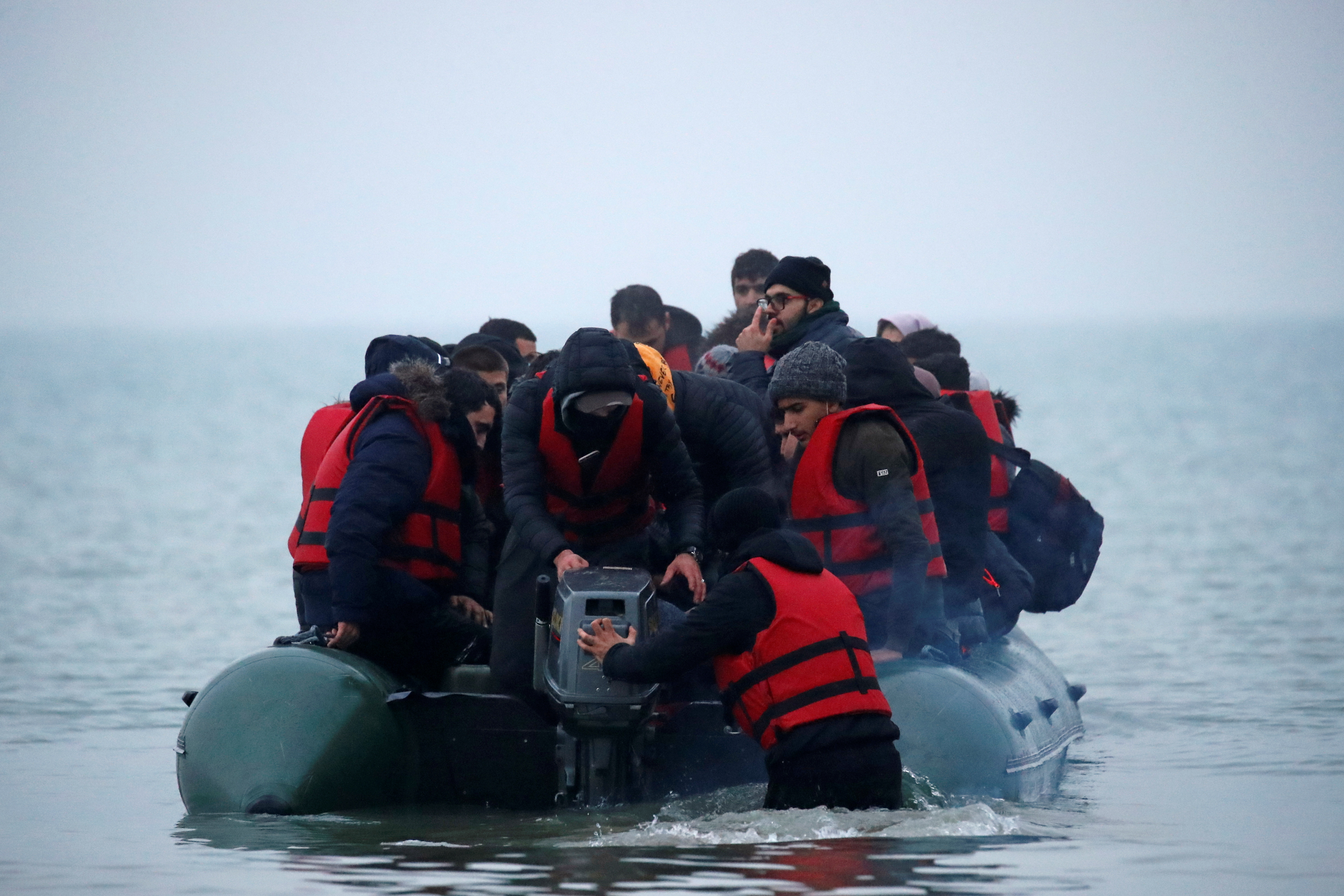 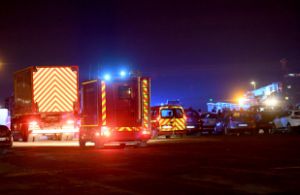 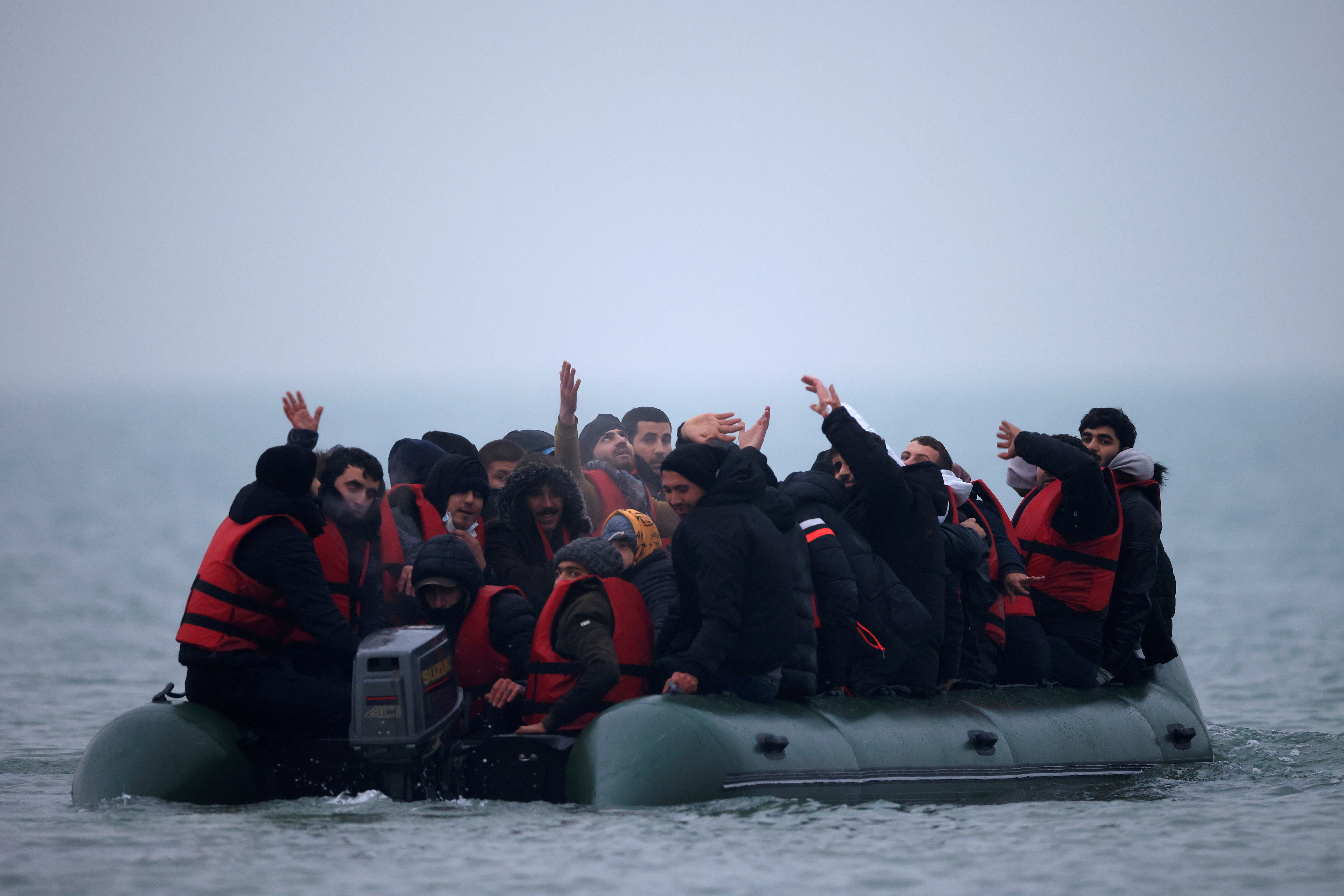 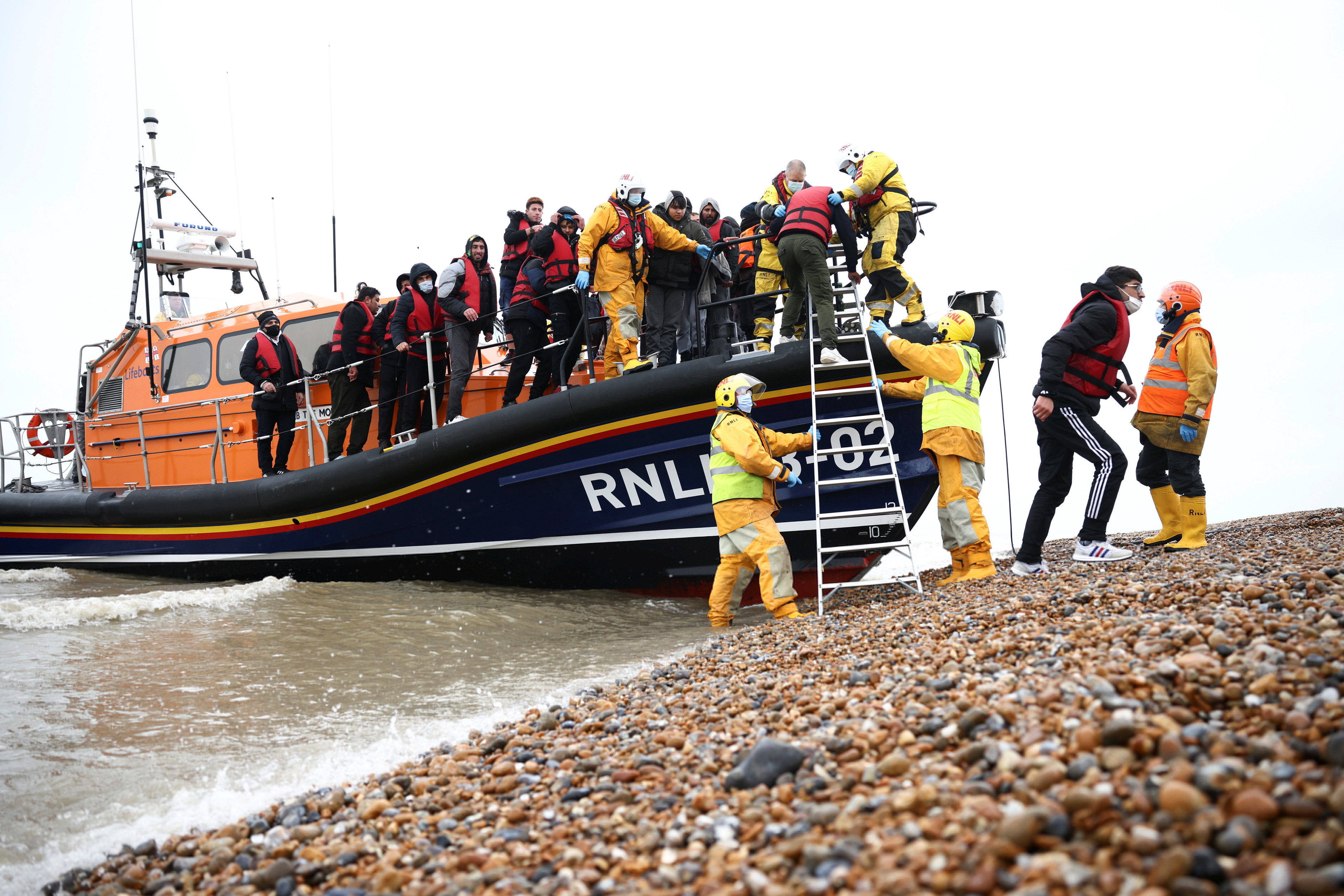 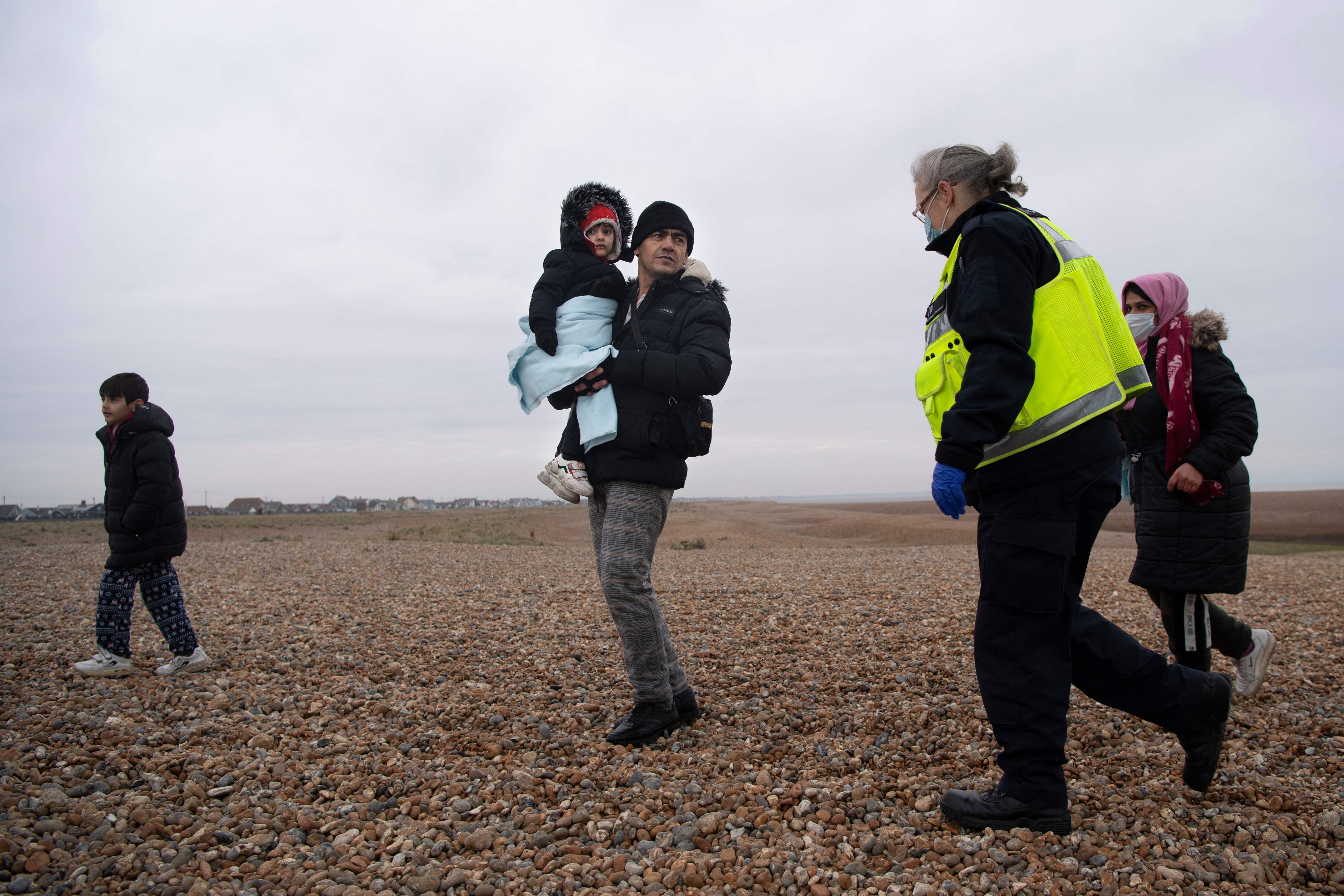