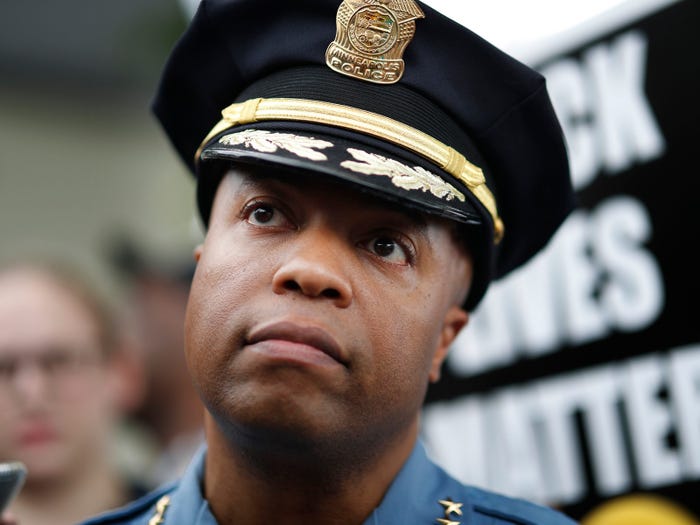 Police in Minneapolis shot and killed a man at a traffic stop on Wednesday. It was the first fatal shooting by a member of the police department since George Floyd's death in May.

Police didn't immediately identify the man, who they say was a suspect in a felony and shot during an exchange of gunfire, but pledged to release the body camera footage on Thursday.

"We want to do everything we can to protect the First Amendment right to free assembly, to demonstrate," Police Chief Medaria Arradondo said at a press conference on Wednesday. "But we cannot allow for destruction, criminal behavior. The city has gone through too much."

The killing of Floyd, a Minneapolis man who died after officers kneeled on his neck for more than eight minutes in May, sparked international unrest and protests against police brutality and racism.

Video of the incident let the world see the horror of Floyd's last few moments. As he was on the ground, he begged for his life, and told officers that he couldn't breathe.

On Wednesday, Arradondo told the community that a preliminary investigation indicated that the man who was killed this week fired at officers first.

Officers approached the man's car around 6:15 p.m., at a gas station about a mile from where Floyd was killed, the Associated Press reported.

Police didn't release the name, age, or race of the man who was killed. A woman in the car was uninjured in the shooting.

Arradondo said the incident, as all police shootings in the city, is under investigation. The officer body cameras were activated at the time.

"I want the community to be able to see what occurred and I think that's part of, again, us moving forward and us wanting to get the facts out there," he said.