Medals of WWII airman who was shot down and killed in front of his brother at Dunkirk during dogfight with three Luftwaffe fighters fetch over £4,000 at auction

The medals of a World War Two airman who was shot down and killed in front of his brother at Dunkirk have sold for over £4,000.

Flying Officer Peter Dixon took on three Luftwaffe fighter planes while thousands of Allied soldiers cheered him on from the packed beaches below.

One of those men was Major John Dixon, who at the time did not release it was his brother in the Hurricane. 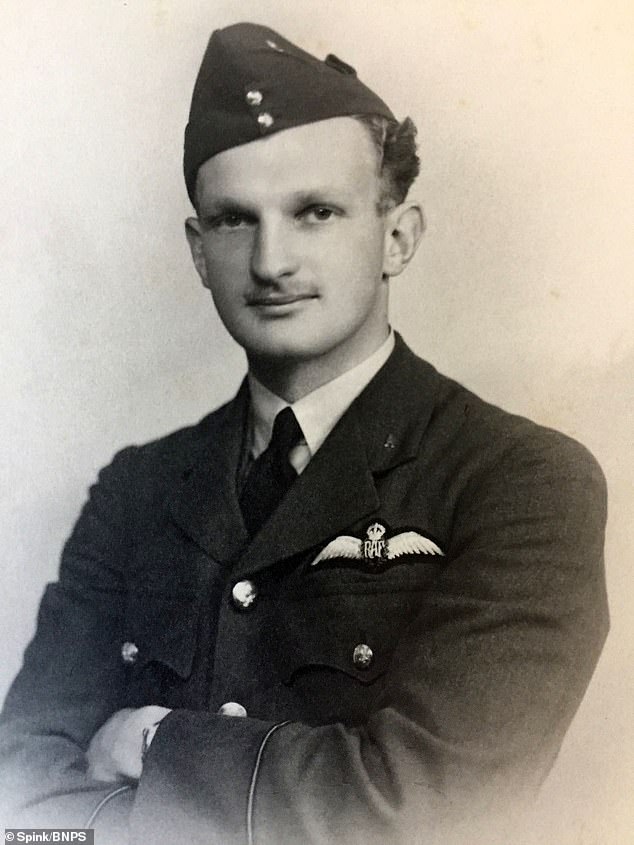 War medals belonging to Flying Officer Peter Dixon were sold at auction for over £4,000 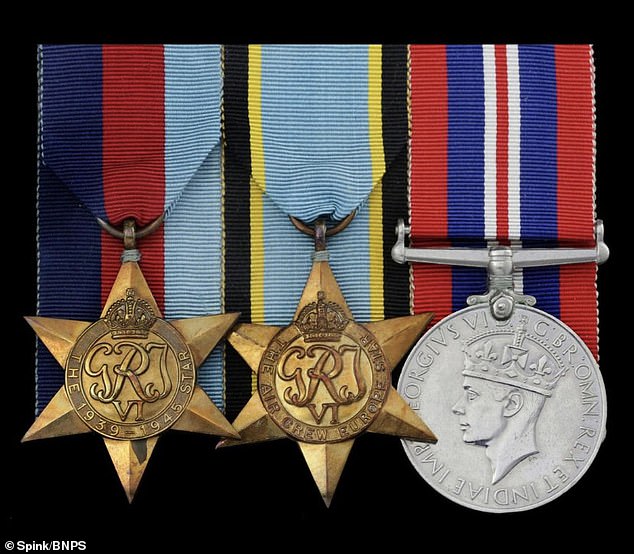 The overall figure paid by the successful bidder was £4,300 – five times the £800 pre-sale estimate

During the dogfight the RAF aircraft was badly hit, forcing F/Off Dixon to bail out only for his parachute to catch fire.

He was recovered from the sea and taken by ambulance to the end of the breakwater where the troops, including Maj Dixon, waited to be evacuated.

When Maj Dixon returned home weeks later he read the dreaded telegram his parents had received stating his brother was missing ‘as a result of air operations on 1st June 1940.’

Later research revealed the pilot he had seen drop from the skies was his brother.

The medals of F/Off Dixon were auctioned off with London-based Spink & Son.

They achieved a hammer price of £3,500, with extra fees taking the overall figure paid by the successful bidder to £4,300 – five times the £800 pre-sale estimate. 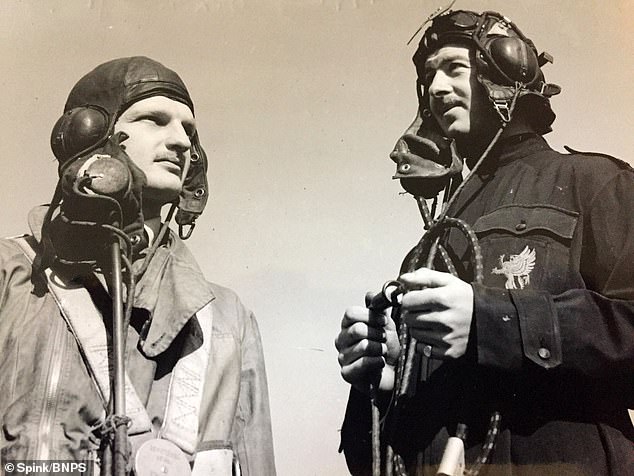 Marcus Budgen, head of the medal department at Spink & Son, said: ‘The awards of Flying Officer Peter Dixon are perhaps the most poignant and moving that I have ever had the privilege to offer.

‘The family story of loss is simply so heartbreaking for his brother watched the scene unfold.

‘We are very pleased with the outcome of the sale.’

He was commissioned with No. 607 Squadron, initially flying Gladiators over the North Sea, before joining the Advanced Air Striking Force in France and converting to Hurricanes.

In May 1940, he claimed five kills in as many days, gaining ace status.

Later that month he made an emergency landing in northern France when he ran out of fuel after trailing and taking out a Heinkel plane. 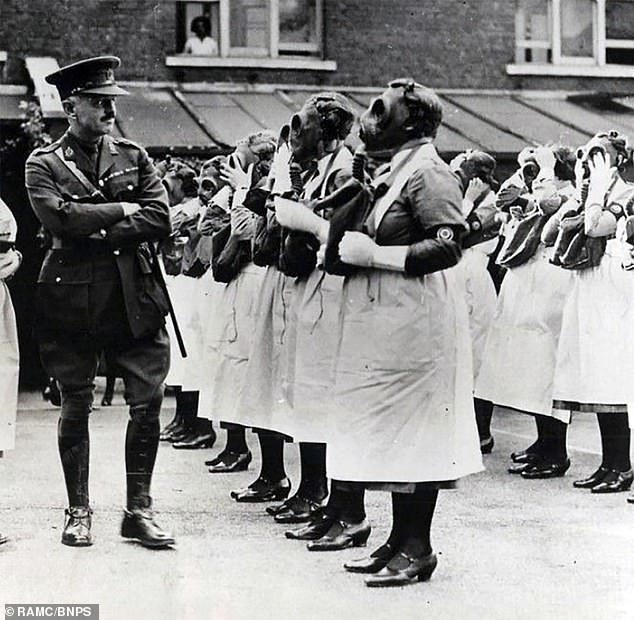 His brother, Major John Dixon (left – seen here inspecting training nurses with gas masks on), was watching on the beaches below as his brother fell from the skies

He set off in search of fuel but by the time he returned the Germans had destroyed his Hurricane.

He joined a column of refugees and hitched a lift with a Belgian army officer to Brussels from where he flew home.

With No 607 Squadron sustaining such heavy losses, F/Off Dixon was transferred to No 145 Squadron at RAF Tangmere in West Sussex.

During Operation Dynamo – the Dunkirk evacuation – he made several flights to fend off the Luftwaffe from dive-bombing the 400,000 troops on the beaches.

On June 1, he was acting as a ‘weaver’ for a large attack when he was shot down.

He is buried at the Commonwealth War Graves Commission cemetery at Dunkirk. 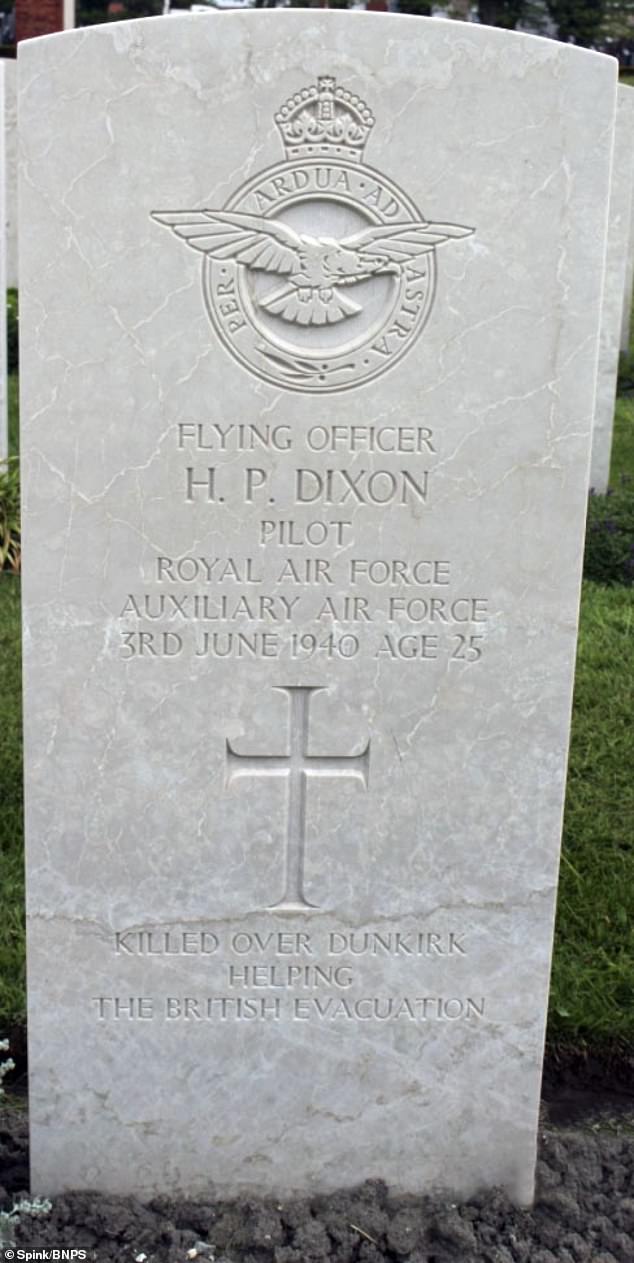 After being shot down, the pilot died from his injuries two days later on June 3, aged 25