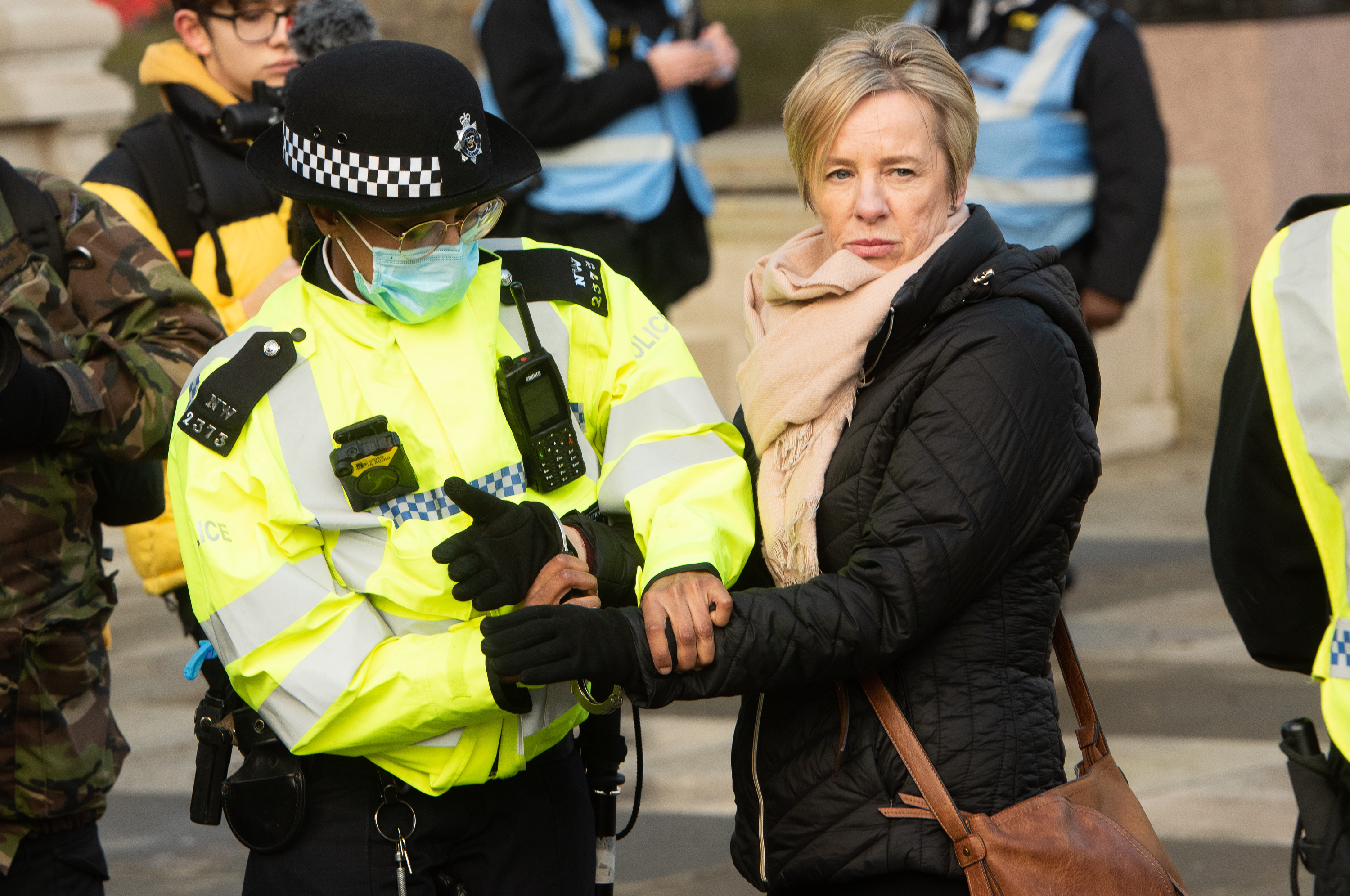 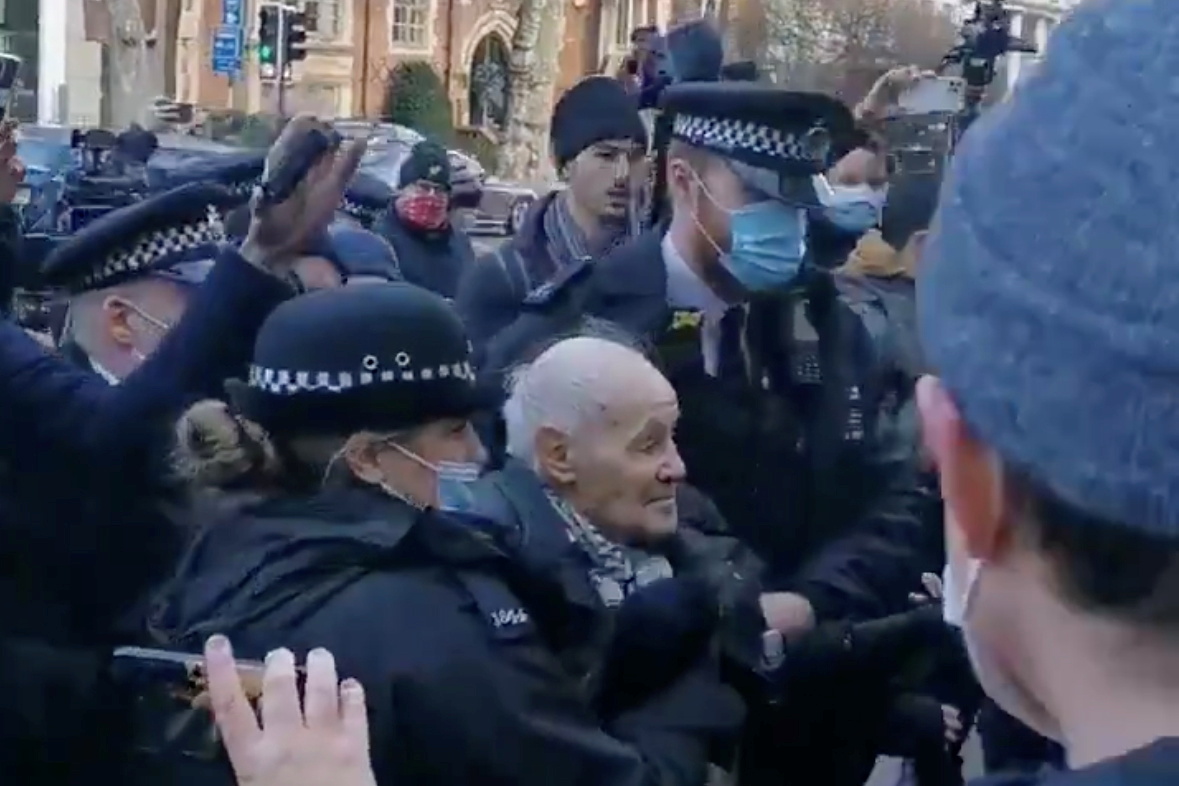 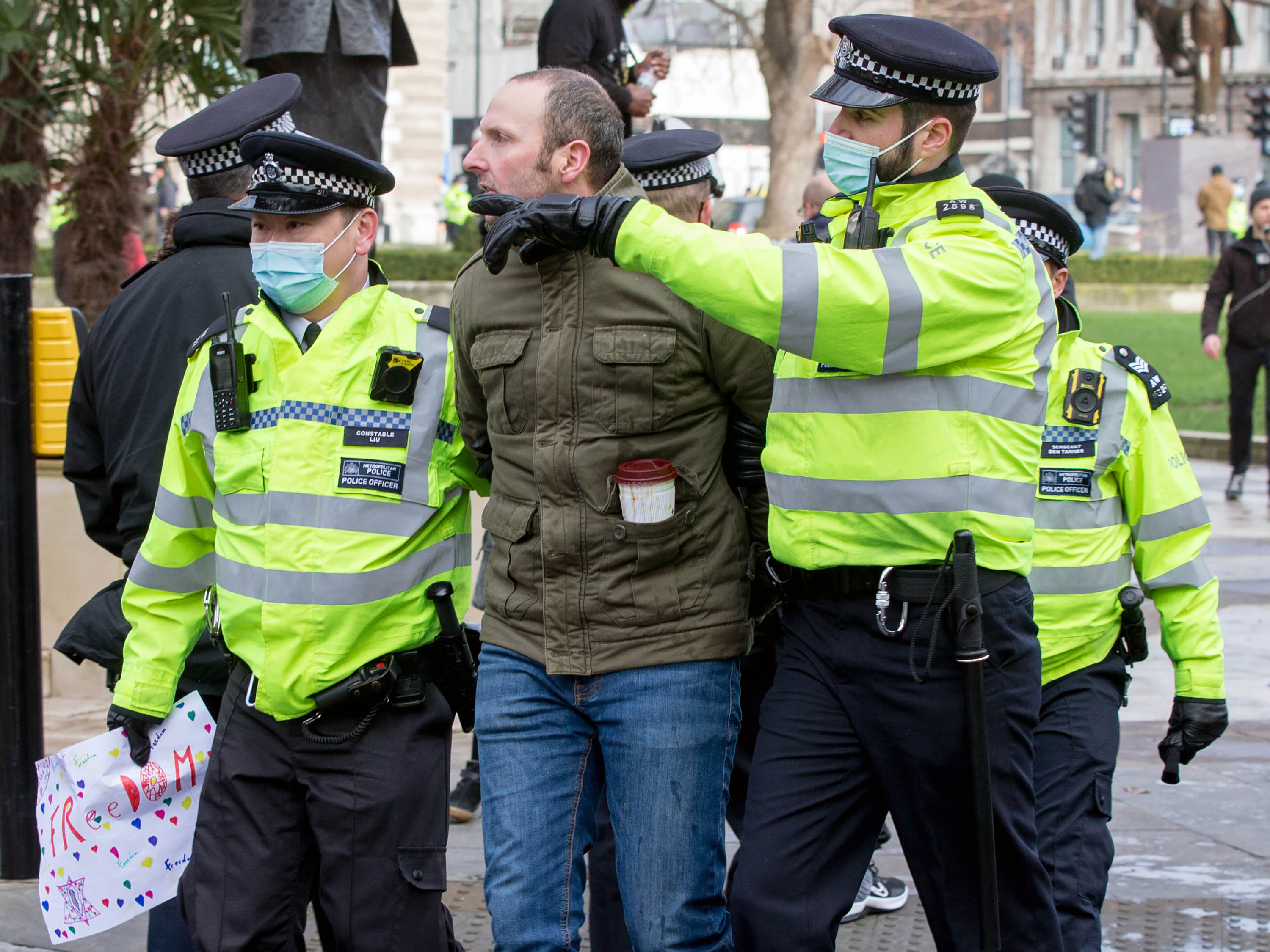 Another seven people were hauled away from a demonstration outside Julian Assange's bail hearing and now face fines of up to £6,400.

In Northampton, a group of friends were pulled over at 5am and slapped with a £800 penalty notice for being in the same car despite being from different households.

Meanwhile, Thames Valley Police has apologised for the behaviour of an officer who they said was 'a bit keen' in handing out leaflets asking drivers to explain why they were out and about in Maidenhead.

The Met Police has rolled out some of the toughest anti-Covid measures, announcing that anyone caught not wearing a face mask in a shop or on public transport would be fined £200. 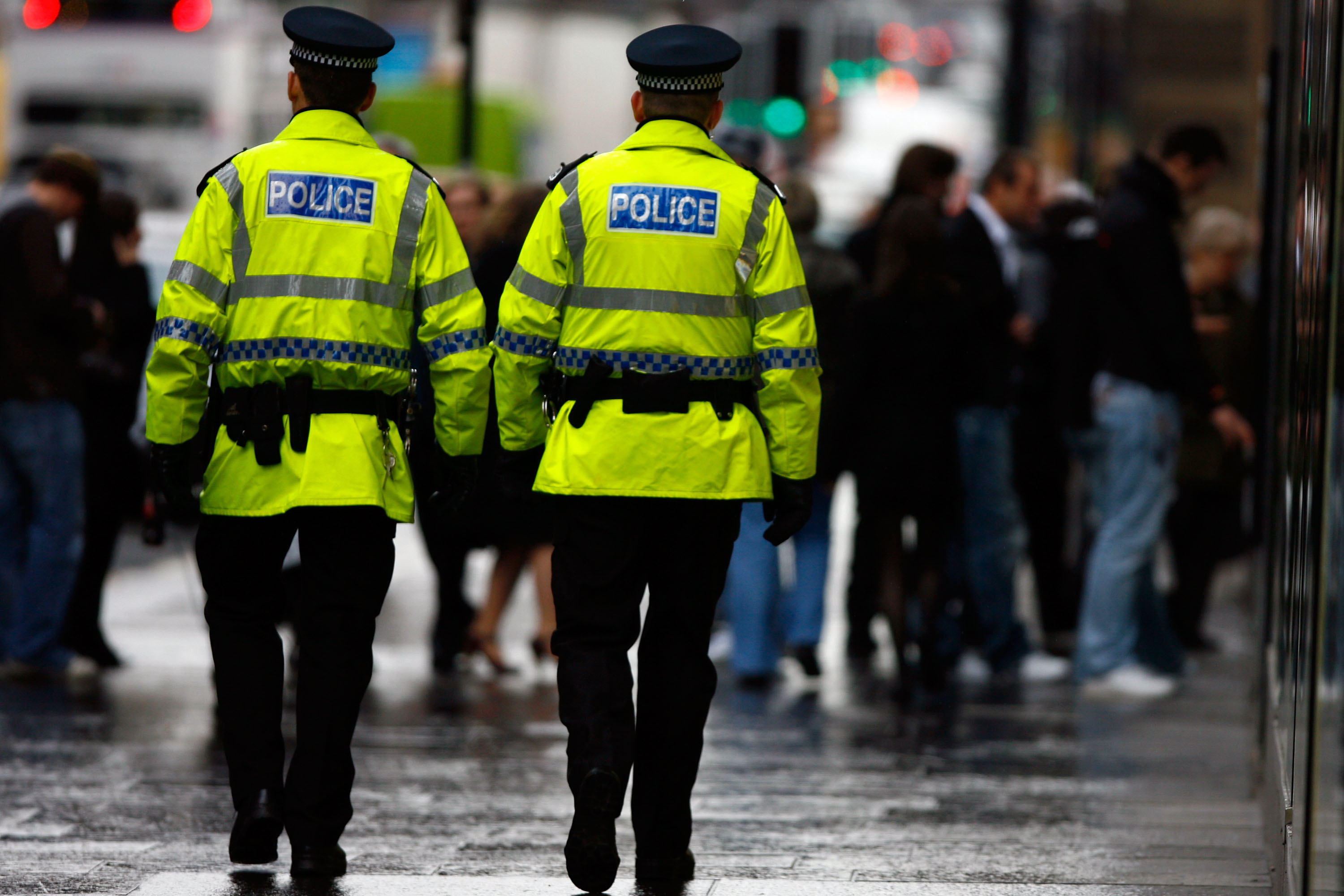 But penalties will not be given on the spot and people will be allowed a short time frame with which to produce a doctor's letter.

Scotland Yard announced they would quiz those in the capital who have fewer “reasonable excuses” to be away from their home as the lockdown came into force.

Deputy Assistant Commissioner Laurence Taylor said: "For those planning on demonstrating, you are reminded of your obligation to adhere to the Government guidelines and stay at home.

"If people are found to be in breach of regulations, put in place to keep the public safe, then they can expect to see enforcement from officers.

"This will not just be organisers of the gatherings but participants too – by now everyone knows their part to play in stopping the spread of the virus.

"People that gather as part of this protest today risk the health of Londoners. I will not tolerate this and that is why we have a policing plan in place to disperse crowds and if necessary, take enforcement action." 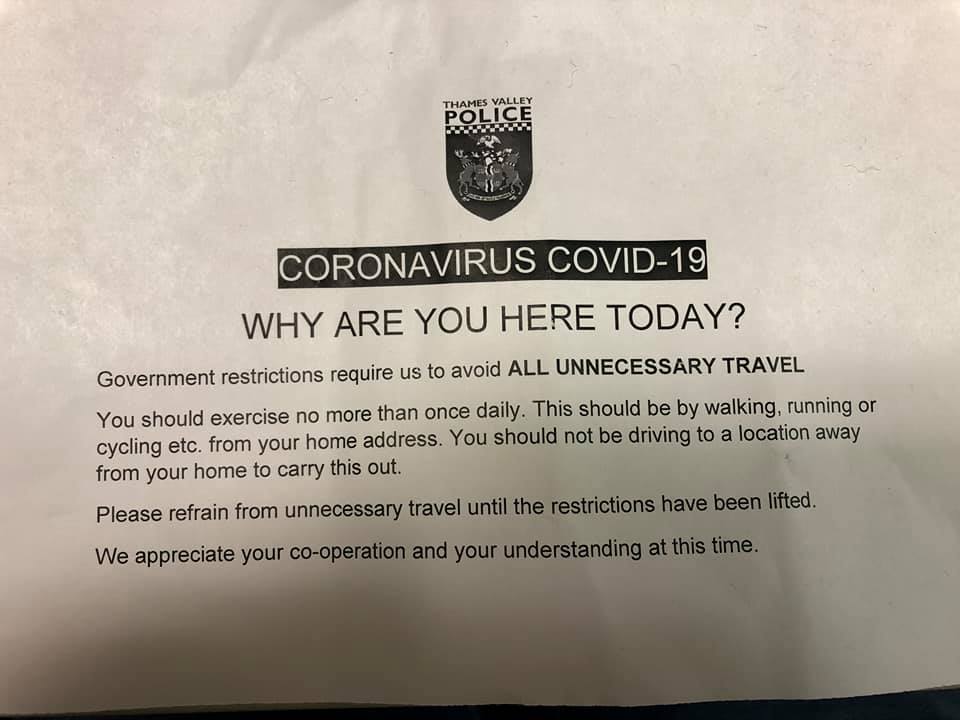 Police officers and PCSOs have been instructed to issue fines more quickly to “anyone committing obvious, wilful and serious breaches”.

Fixed penalty notices of £200 will be issued for a first offence, with this doubling for further offences up to a maximum of £6,400.

Already this morning, officers stopped cars outside a Tesco in Maidenhead, Berks, and handed them leaflets asking: "Why are you here today?"

Residents were outraged to find their trips for shopping and exercise challenged by uniformed police.

Thames Valley Police apologised for the behaviour of the officer who they said was "a bit keen" in handing out the reminder.

Rosalind Bieber, who shared a picture of one of the leaflets online, said: "There were two police officers stopping every single car and asking where we were going.

Why are you here today?"

"I was handed this leaflet and told I cannot shop at the Tesco in Taplow as I live in Maidenhead.

"They will be issuing fines from tomorrow, so be aware folks."

Officers were heard telling people: "I'm going to issue you a fine if you don't return home."

West Midlands Police have also stepped up their efforts and have asked for permission to force entry into homes to break up parties.

Cops also warned that anyone attending parties, unlicensed music events or large illegal gatherings will be fined – not just the organisers.

Those holding, or involved in holding, an illegal gathering of more than 30 people risk a police-issued fine of £10,000.

Meanwhile, people not wearing masks where they should be, and without good reason, will also be fined.

Current rules mean people can now only leave their home for a few reasons including essential shopping for food or medicine.

They can also exercise once a day. People are not allowed to socialise or travel to a second home in another part of the UK.

The warning comes as the Met Police said Londoners can expect officers to be “more inquisitive” as to why they see them out and about.

Local officers will also be working with council colleagues across the capital to help ensure businesses and people using public spaces such as parks are following the rules.

During the first lockdown in March, cops set up roadblocks, patrolled stations and parks and handed out fines.

If people continue to break the rules, putting themselves, their families and their communities at greater risk, our officers are ready to act robustly."

This seemed to stop towards the end of the year but the new guidance suggests police are once again adopting a zero-tolerance policy.

It comes after Ken Marsh, chairman of the Metropolitan Police Federation, said enforcing the new national lockdown will put “a lot of pressure” on cops.

He said some 1,300 were off sick or self-isolating in the capital.

His counterpart nationally, John Apter, said some forces were reporting 15% of their staff off sick or self-isolating.

Mr Marsh urged the Government to place police officers on a priority list to receive coronavirus vaccines, saying requests to the Government so far were “falling on deaf ears”.

Asked about how lockdown enforcement would affect officers, Mr Marsh said: “It will obviously create a lot of pressure on us because we have a lot more officers off this time than we did back in March. 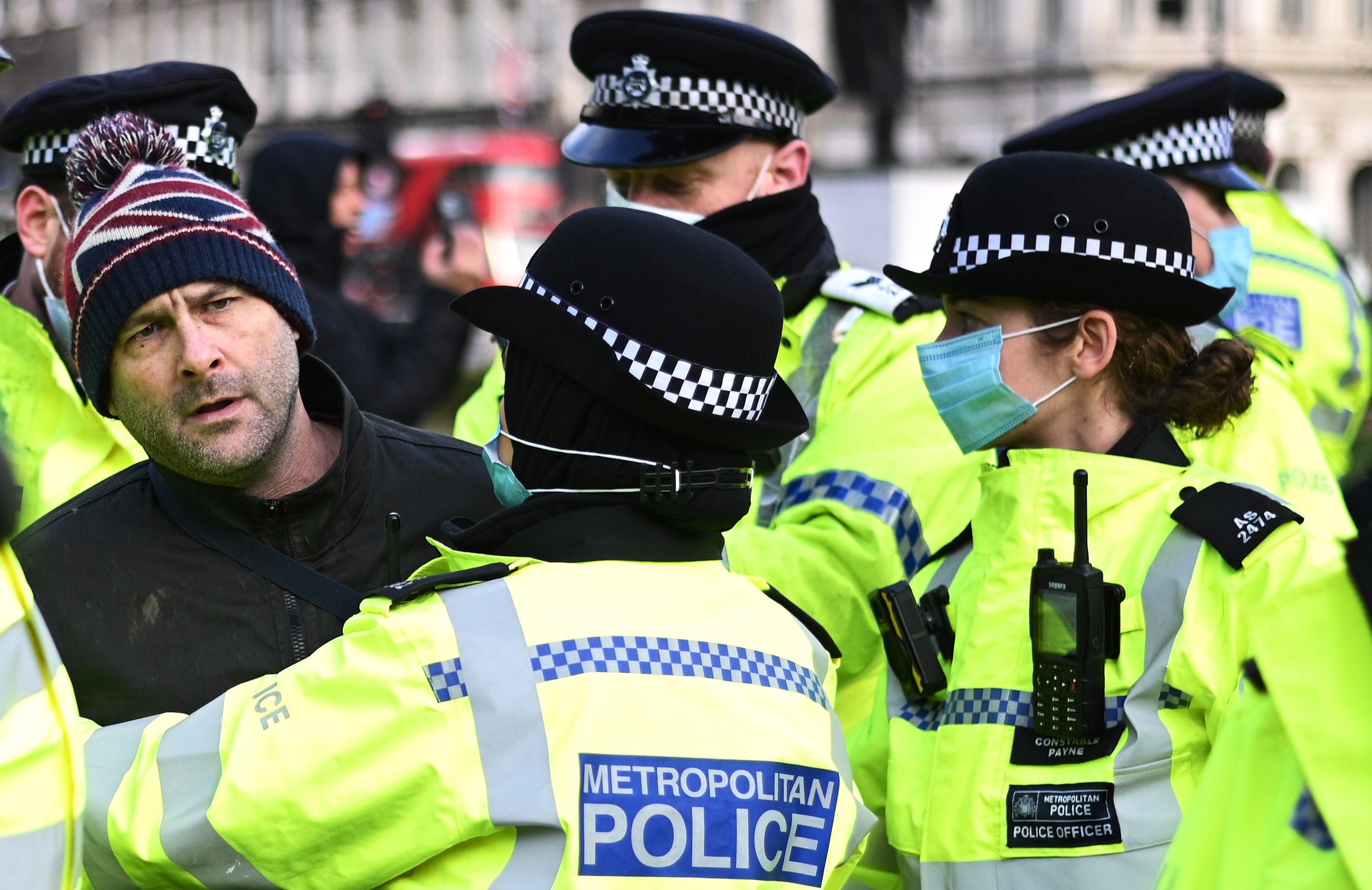 “Our numbers have rocketed in terms of officers with Covid and officers isolating and we envisage that getting worse.

“So the pressure is on my colleagues who are still out there to maintain the same level that they did before.”

Mr Apter, whose organisation represents 130,000 officers, said the “last thing the public want is to call 999 in their hour of need, only to find we are too short of officers to be able to respond”.

It comes as Boris Johnson prepares for a showdown with Tory lockdown-sceptics today as fears grow that the new laws will last until the end of March.

MPs will be recalled to the House of Commons today for crucial votes on the new laws – which came into place last night.

The vote – which is set to take place this evening – will comfortably pass, and Labour will back the new laws too.

Boris has promised that his vaccines strategy will deliver a way out of the lockdown, with a target of 13million of the most vulnerable Brits jabbed by the middle of February.

Only after then will he consider lifting measures.

Deputy Assistant Commissioner Matt Twist, who leads the Met’s response to the Covid pandemic, said: “After ten months of this pandemic the number of people who are genuinely not aware of the restrictions and the reasons they are in place is vanishingly small.

“We know the overwhelming majority of Londoners will do the right thing by staying at home, wearing masks and not gathering, but a small minority continue to ignore rules put in place to protect the NHS and save lives.

What you could be fined for

You could face a fine for:

A full list of reasons are set to be published by the Government in due course.

The excuses are expected to include:

“Our first duty as police officers is to preserve life.

“The critical situation our NHS colleagues are facing and the way the new virus variant moves through communities, means we can no longer spend our time explaining or encouraging people to follow rules where they are wilfully and dangerously breaching.

“Less than a month ago we launched a new digital fines system which makes it quicker and easier for officers to issue fines on the spot.

“Since its launch more people have been reported for fines than in the rest of the year combined; this is also an indicator of a worsening position in the epidemic, and officers stepping in more quickly to try to keep communities safe.

“I hope it is not necessary for this particular trend to carry on but if people continue to break the rules, putting themselves, their families and their communities at greater risk, our officers are ready to act robustly.

“This is why Londoners must take action now to stop this virus spreading further across our city.

“Action now by everyone will help reduce the time our capital must live with these restrictions and crucially, will prevent more people from dying needlessly because of this virus. It’s up to us all to do the right thing.” 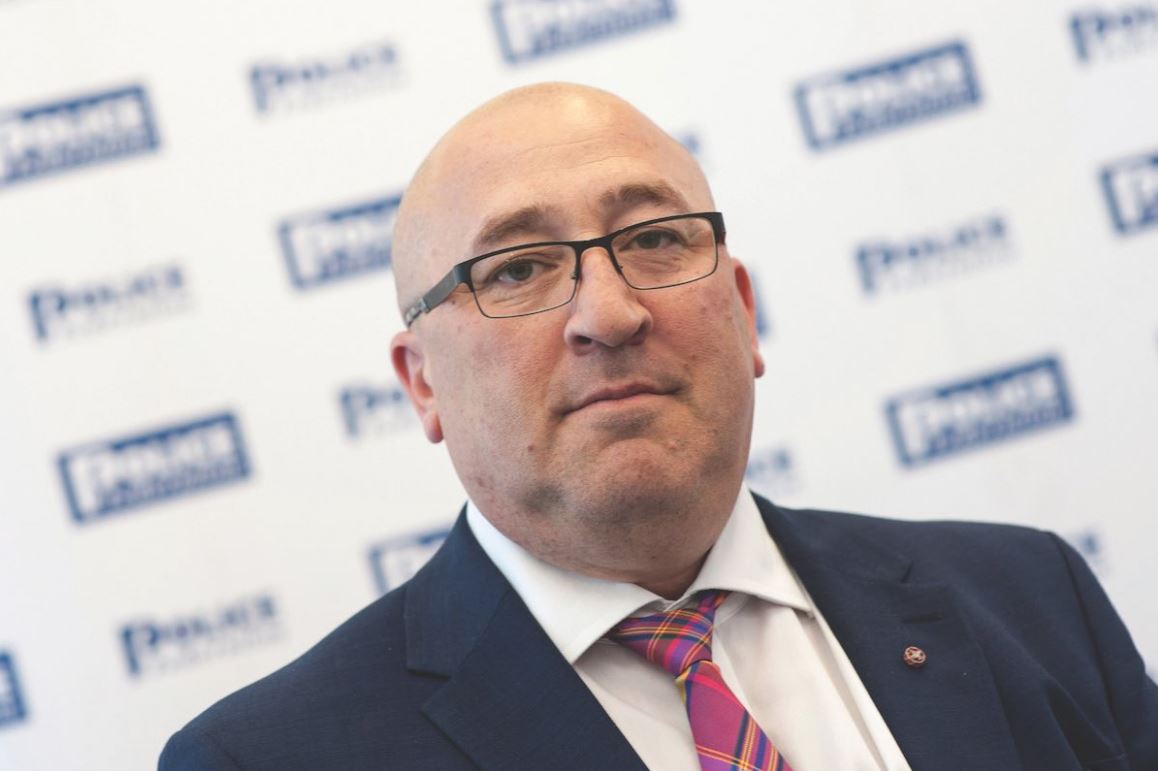 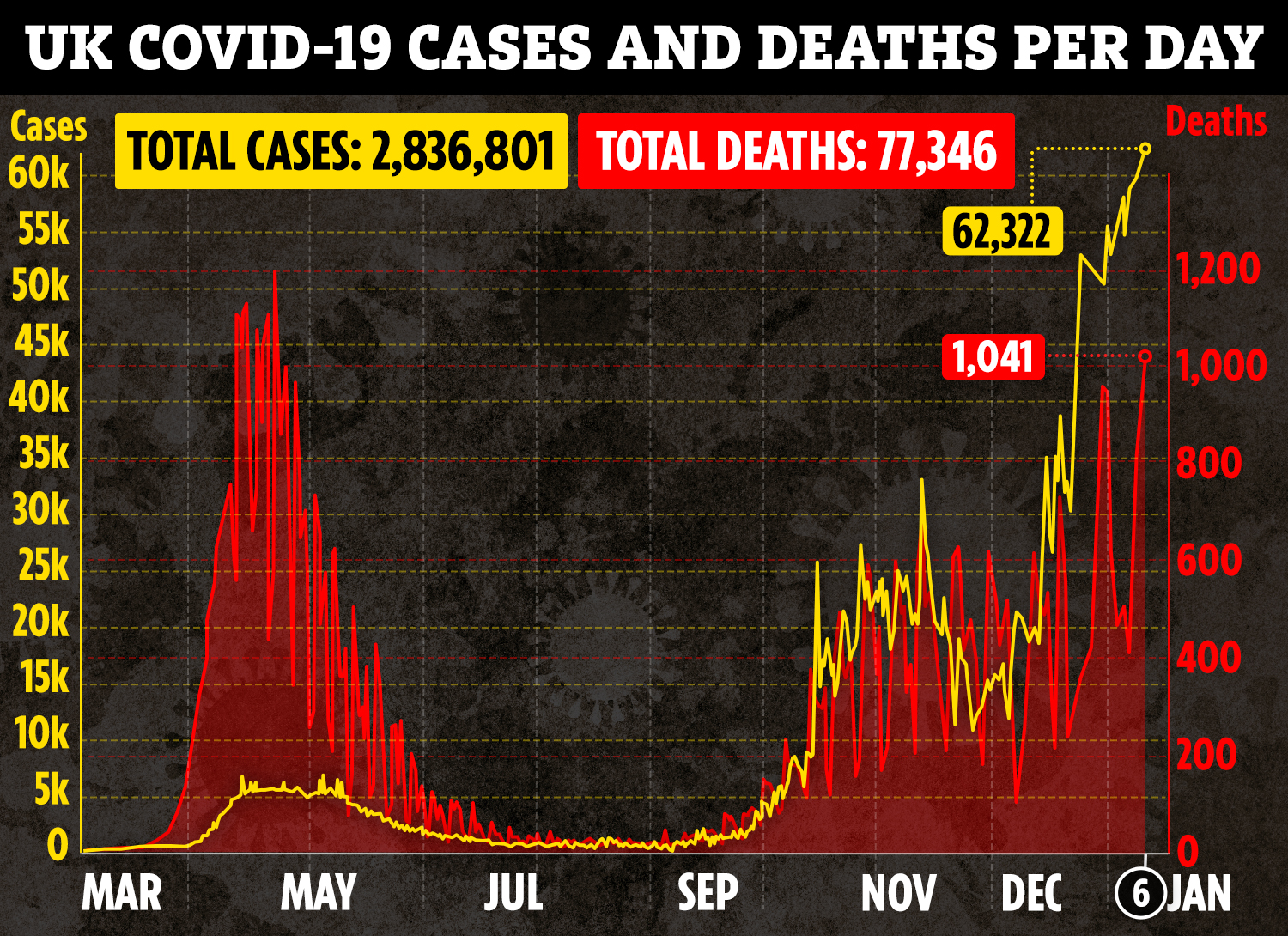