Mandarins’ £42m bonus bonanza: Ministry of Defence fat cats get bulk of the payouts as it emerges staff on £200k a year got £20k cheques… and the handouts total is likely to be just the tip of the iceberg

Whitehall officials banked at least £42 million in bonuses last year – and the true figure is likely to be much higher, the Daily Mail can reveal.

Civil servants at the Ministry of Defence pocketed the lion’s share of salary top-ups, with the department spending more than £12.2 million on bonus packages. 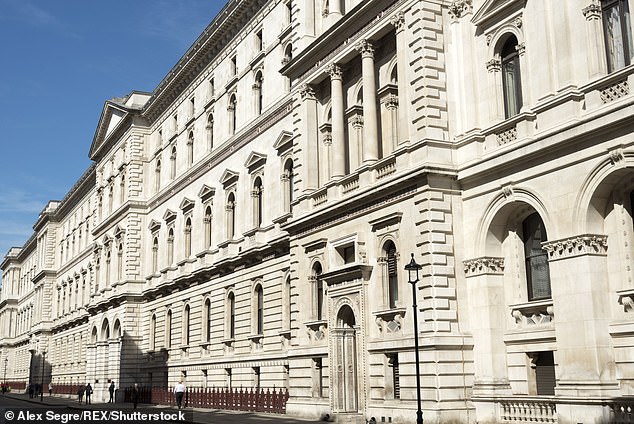 Whitehall officials banked at least £42 million in bonuses last year – and the true figure is likely to be much higher, the Daily Mail can reveal. Whitehall buildings are seen above in London

News of hefty bonuses to senior staff – many already on six-figure salaries – will anger taxpayers, most of whom earn a fraction of public sector staff’s lucrative pay packets.

The £42.4 million in bonus packages is thought to be only the tip of the iceberg. The figure is based on 14 responses to Freedom of Information requests asking for details of bonus pay and details – meaning only a third of the Government’s 43 ministerial and non-ministerial departments replied – and details from two annual reports.

The Mail’s investigation shows that the Competition and Markets Authority paid chief operating officer Erik Wilson, who earns up to £135,000 a year, a bonus of up to £25,000.

John O’Connell, chief executive of the TaxPayers’ Alliance, which worked with the Mail in uncovering the figures, criticised the lavish bonus payments and called for the ‘gold-plated bonuses’ to be cut.

Dame Melanie Dawes, who moved to the broadcasting regulator in February, pocketed between £15,000 and £20,000 on top of her salary as permanent secretary – which, at more than £170,000, already exceeded Boris Johnson’s pay packet. 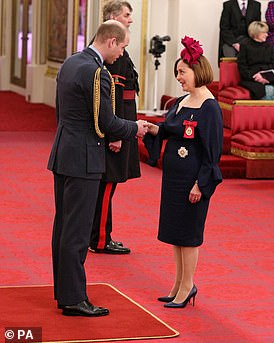 Ofcom’s new chief executive Dame Melanie Dawes, who moved to the broadcasting regulator in February, pocketed between £15,000 and £20,000 on top of her salary as permanent secretary

The former Whitehall mandarin, 54, also received £23,900 in pension contributions, despite sitting on a pension pot of almost £1 million in 2016/17 – three years before she left the Civil Service.

Six of the Ministry of Housing, Communities and Local Government’s senior civil servants – all on salaries of at least £90,000 – pocketed bonuses worth up to £95,000 combined.

Dame Melanie had been the most senior woman in the Civil Service. She is thought to be on about £315,000 a year as Ofcom chief executive.

Bonuses are awarded to staff based on performance at an individual, team or organisational level and assessed by each department. The Government launched a review of public sector bonuses in 2012 after outrage over pay-outs at bodies such as Royal Bank of Scotland.

Former Treasury Chief Secretary Danny Alexander wrote to all Whitehall departments at the time, asking them to examine their reward structures to ensure only ‘genuine excellence’ is recognised.

Public sector pay was frozen for two years up to 2013, then capped at 1 per cent rises for five more years. In July, pay was increased by up to 3.1 per cent, but workers say they have incurred nearly a decade of real-term pay cuts.

At the end of March, 6,450 Whitehall employees were at ‘senior civil service’ level, up from 4,300 five years earlier.

The MoD said its payouts were made up of £11.7 million to ‘below senior civil service’ staff and £595,410 to senior staff on ‘standard contracts’.

The figures are likely to infuriate those on the front-line of the Armed Forces whose staff numbers have fallen for nine consecutive years. Many who left cited poor pay as the main reason.

Also topping up civil servants’ pay by thousands was the Department for Business, Energy and Industrial Strategy, which spent £4.3 million on rewarding staff.

The Department for Transport made payouts of almost £9 million, while the Home Office figure was more than £8.1million.

Several bodies would not disclose details of the highest bonus payments, claiming the figures would be published in annual reports.

The Department for Digital, Culture, Media and Sport was unable to provide a total figure, stating bonus payments have ‘not yet been paid in their entirety’.

The Department for Environment Food and Rural Affairs spent almost £2.5 million on bonus payments to more than 5,000 members of staff ‘for both sustained performance and exceptional contributions.’

Mr O’Connell said: ‘Taxpayers will be baffled at the bonuses being handed out to public sector fat cats.

‘People in the private sector are worried enough about keeping their own jobs, let alone the thought that they should fund big bonuses for government officials.’

A Government spokesman said: ‘We are committed to delivering the best value for money. We routinely publish our expenditure to maintain transparency.’

Senior civil servants – dubbed the ‘pension aristocracy’ – are sitting on lucrative nest eggs that would cost millions more to buy on the annuity market.

Pension pots for the leading 23 civil servants totalled £24.5million in 2018-2019, the last year for which data exists, the Mail can reveal.

Thirteen had pension pots worth more than £1million, only two of whom were women. Those with the biggest nest eggs are guaranteed payments on retirement of £87,500 a year, almost ten times the full annual state pension of just over £9,100.

On top of this, 15 department heads will receive a lump sum on retirement – the average value of this is £148,167. 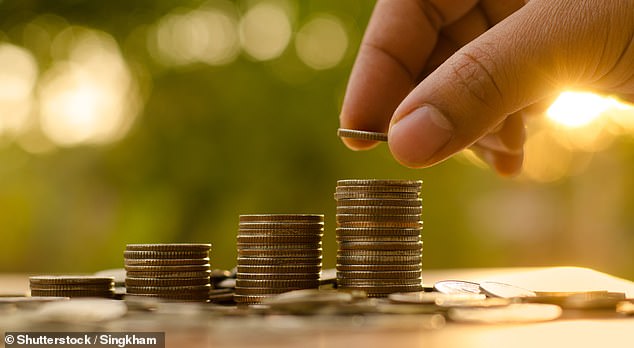 News of the figures is likely to outrage private-sector workers who have seen the value of their pensions plummet on the stock market.

Generous final salary schemes have been almost wiped out as bosses are unwilling to bear the cost or risk of running them.

The mandarins’ pensions are referred to as gold-plated because after retirement they get a guaranteed income for life linked to inflation. Simon McDonald, head of the Foreign and Commonwealth Office, is sitting on the largest nest egg valued at £2.05million.

Sir Mark Sedwill, former Cabinet Secretary, received a £250,000 ‘golden goodbye’ when he stepped down in September and also has a pension pot of £1.5million, or £87,500 annually.

Former pensions minister Baroness Altmann said it would cost those with a private pension at least £3.5million to buy such a package on the annuity market. She added: ‘I call them the pension aristocracy.’ 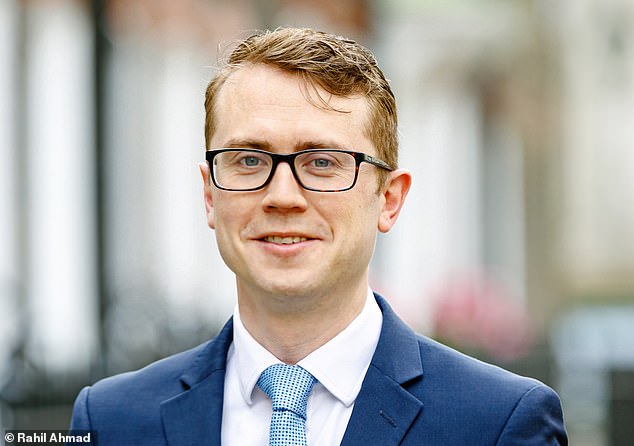 John O’Connell, chief executive of the TaxPayers’ Alliance, which worked with the Mail in uncovering the figures, criticised the lavish bonus payments and called for the ‘gold-plated bonuses’ to be cut. Mr O’Connell is pictured above

Clare Moriarty, former permanent secretary at the Department for Exiting the European Union, had a pension pot worth £1.6million at the end of March 2019.

Miss Moriarty, a civil servant for 35 years, took on the post in April 2019 after three years in the same role at the Department for the Environment.

The other woman on the list of those with pensions of £1million-plus is Bernadette Kelly, permanent secretary at the Department for Transport, with a retirement package worth £1.39million.

A Government source said overall remuneration is constantly reviewed so it is affordable and competitive with the private sector.

They added the civil service pension scheme has been reformed twice and it is not unusual for senior staff to accumulate large pots towards the end of their careers.

Many taxpayers are currently struggling to afford even life’s essentials – but they are still funding the purchase of fine artwork for government buildings and the House of Lords.

Many of the pieces – costing hundreds of thousands – are not even on display and have been left to gather dust in store cupboards.

The Department for Digital, Culture, Media and Sport spent £432,071 on acquiring art for buildings through the Government Art Collection (GAC). This included £24,000 on a five-foot wall made of 13,000 white Lego bricks. The wall was created by Michael Wilkinson but it is unclear where it has been installed.

Other works of art include a photographic print called Shadows and Disturbances by Zarina Bhimji, bought for £20,160. And an untitled collage made from magazines in 1994 by Donald Rodney cost £5,400.

The most expensive purchase was a £107,250 oil painting by Denzil Forrester titled Family Living.

It was bought for the UK consul general’s official residence in New York. Separately, the House of Lords spent just over £17,200 on art: £5,258 on an oil painting called the Tank Attack by Frank Brangwyn, £5,000 on a piece called Royal Gallery by Toby Ward, and it commissioned a £7,000 portrait of Lord Fowler, the current Lord Speaker. The three pieces have not been displayed yet.

DCMS also paid £34,865 to transfer artwork to Tokyo, taking the total paid out by the Government and the Lords last year to at least £484,194.

The works of art from the GAC are displayed in government buildings in Britain, including the Foreign and Commonwealth Office, and in British embassies for what it terms ‘cultural diplomacy’.

DCMS also spent £17,000 on a bizarre artificial snakeskin sculpture titled Snake, Apple, Tree. The sculpture is by Siobhan Hapaska, who was inspired by the Book of Genesis.

The art magazine Frieze says of the piece: ‘In Hapaska’s take on the tale, Adam and Eve are nowhere to be seen, while the serpent retains a vestigial, artificial presence.’

A spokesman for the DCMS said: ‘The GAC helps promote the creativity of British art and culture at home and across the globe with acquisitions approved by an independent expert panel.’

A Lords spokesman said: ‘Every acquisition is considered very carefully to ensure it represents value for money and fits the acquisitions policy. The latest acquisitions will be placed on public display as soon as it is safe to do so. This has been delayed due to the coronavirus pandemic. It is not true to say they are ‘gathering dust’.’