I texted a friend to see if she was free for lunch in the city. She replied that she was still working from home and that she expected it would be a few more weeks before she was back working in the city.

I was surprised. I had forgotten for a moment that some workers have not yet returned. From a city worker’s perspective, things are feeling pretty normal around the CBD right now. 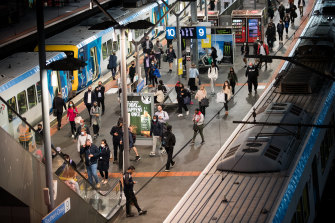 City workers have begun returning to the office in greater numbers. Credit:Jason South

On the Yarra Promenade near Crown, there were plenty of cyclists zipping into the city in the morning. Waiting for them was a considerable number of police, measuring with handheld devices the speed at which the cyclists were travelling. Some cyclists do tend to whip along the promenade fast, causing pedestrians to scatter, so the police presence was a useful reminder to slow down. It also meant that, at last, the city is getting busy again.

The renewal of activity is not uniform across the CBD. Some city buildings still seem quiet. Outside on the street though increasing foot traffic is evident on main streets and public transport is getting more crowded. People appear to be less tense about being in close proximity to others.

The great experiment of shifting work to home will have its advocates in those who gained time in the day by cutting out the commute to and from the city.

Working one day a week from home, and four days in the city, is enough home office time for me. Working full-time from home risks, I think, losing too many of the things that enhance our enjoyment of work, like the natural exchange of information through everyday interactions and the camaraderie among colleagues. The serenity of home can be shaken by its transformation into an office space. 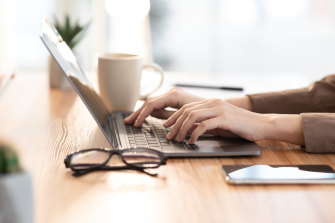 The serenity of home can be shaken by its transformation into an office space.Credit:iStock

Zoom meetings, where each attendee hovers over the mute/unmute button anticipating when to enter the conversation without cutting across someone else, cannot replace those natural and valuable interactions between colleagues, although Zoom may be a better way of attending continuing professional development training in more comfort, avoiding as it does several hours sitting in the same spot in a hotel conference room.

I am hopeful that the city will continue to awake from its year-long slumber imposed upon it by the extraordinary events of 2020.

Beyond that, my greatest hope is that we will reach a time when we no longer need to be talking about COVID-19, but rather the latest exhibition at the National Gallery or the terrific show, full of belly laughs, at the International Comedy Festival, or even the events in the life of my friend since we last caught up for coffee in the city, pre-COVID-19, more than a year ago.

Melissa Coburn is a freelance writer.