A judge has slammed Green Flag for refusing to help a stranded nursing student motorist ‘because she wasn’t parked on the hard shoulder’ before she was killed when a truck hit her car.

Shirley-Ann Dumbuya was fatally injured when an 18-tonne skip wagon ploughed into her stationary Kia Ceed on the M60 clockwise in January last year.

The 38-year-old had become stuck after her car cut out, leaving her trapped between Lane one and a set of hatchmarks bordering a slip road at Junction 20, near Middleton.

A court heard that when road assistance provider Green Flag – known for its motto ‘Common Sense to the Rescue’ – were called for help staff said they wouldn’t send a recovery truck or mechanic unless it was parked on the hard shoulder.

Moments later a DAF truck driven by John Bowers smashed into the rear of her car after he failed to realise it wasn’t moving in the rush hour traffic on January 21.

The nursing student, who was on her way to sit an exam as part of her finals, suffered multiple injuries in the impact and died shortly afterwards. 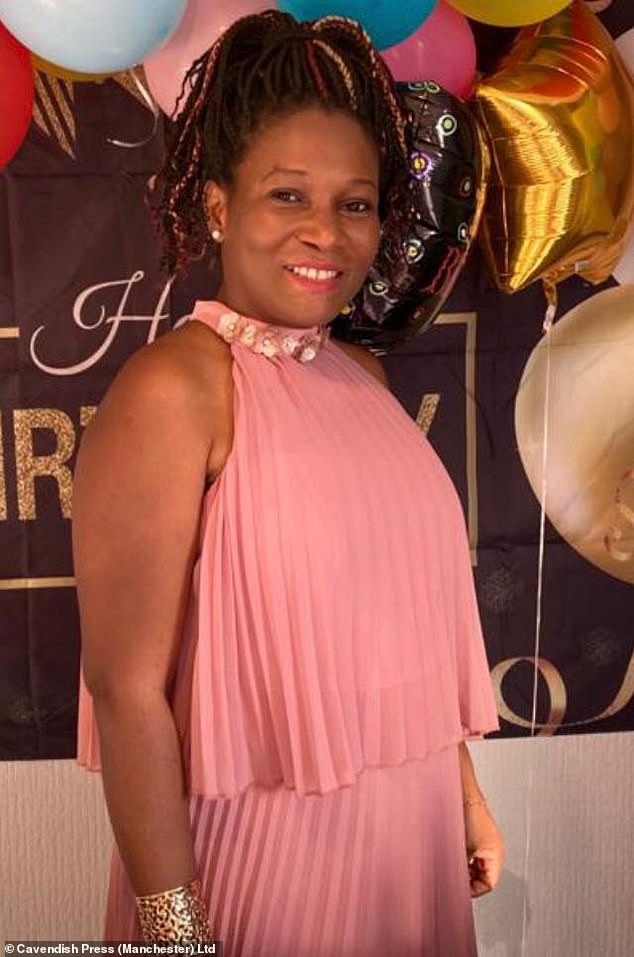 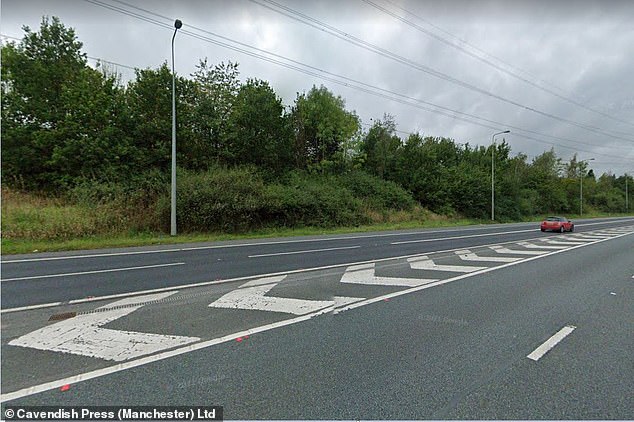 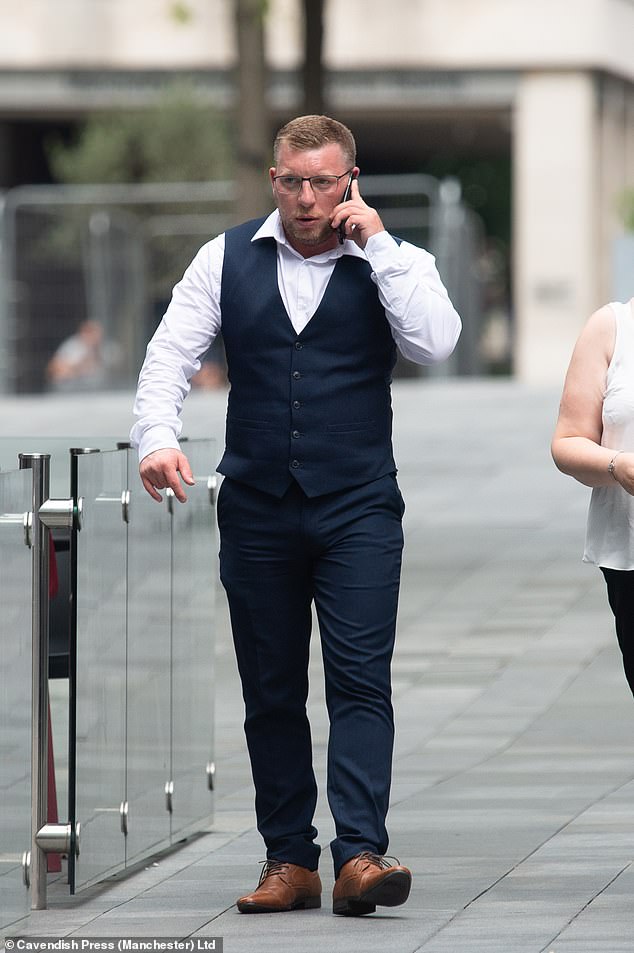 Moments after pleading for help, Mrs Dumbuya received fatal injuries when a skip wagon driven by John Bowers (pictured) crashed into her car

Mrs Dumbuya’s husband Peniel, a bus driver, dashed to the scene following his wife’s SOS call only to find the wreckage of her car on an embankment and police waiting to tell her she had been killed.

It emerged she had only used her husband’s car that day as her own vehicle had a faulty windscreen wiper. She was awarded a posthumous degree following her death.

At Manchester Crown Court Judge Anthony Cross QC accused Green Flag of ‘systemic failings’ and called for police to investigate whether more could have been done to rescue Mrs Dumbuya.

The judge also questioned why the organisation had not reported the breakdown to police or encouraging the family to do so.

‘This tragic accident was the result of an accumulation of errors starting after Mrs Dumbuya could not get to the hard shoulder,’ said the judge.

‘She sensibly called Green Flag as she and her family had sensibly paid for their assistance and yet she was told that they could not help. The brutal reality is that she had a dreadful conundrum whether to get out of the car or stay in.

‘It seems that this is a systemic failure. There should be some form of enquiry carried out by the Assistant Chief Constable responsible for road traffic as to what should happen in those circumstances. 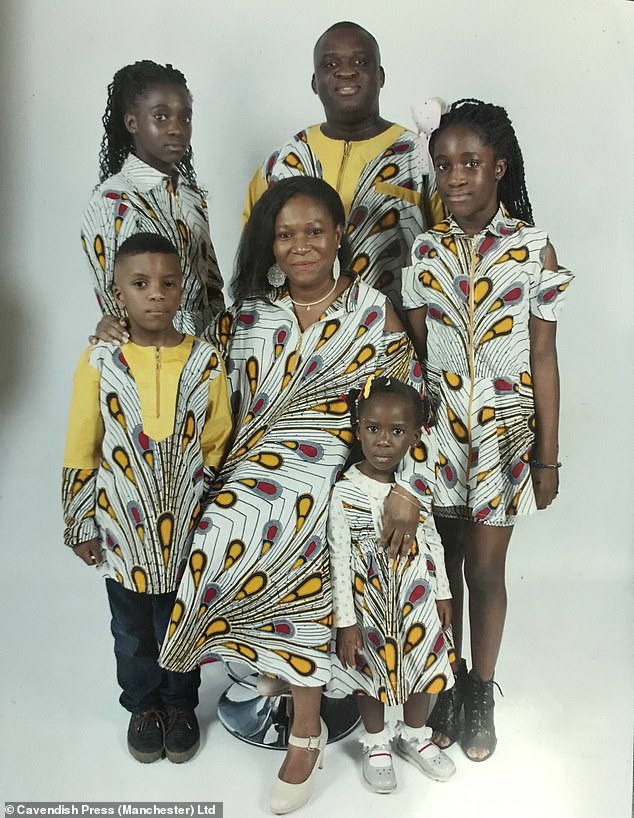 The mother-of-four received multiple injuries and never recovered in the crash on January 21, 2021. Here she is pictured with her children (clockwise from top left) Alice, Victoria, Deborah and Michael, and husband Penial 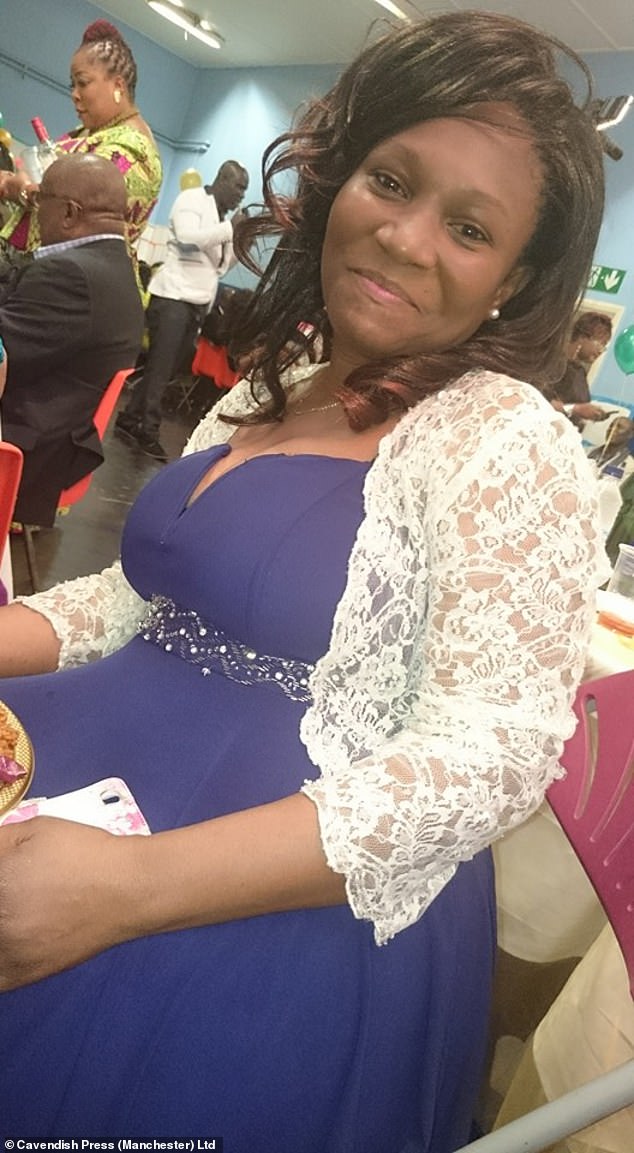 ‘In my judgement, Green Flag should take it upon themselves to ring 999 to help the person because it was obvious that Mrs Dumbuya would have been panicking and wondering whether to stay or leave the vehicle. She would have been worried about crossing the motorway.’

He added: ‘It’s obvious to me that society has lost someone who was not only going to make a valuable contribution to society but who had already done so, just by being a good person.

‘It would be easy to wreak revenge on the defendant by jailing him but I rather suspect Mrs Dumbuya’s family are not interested in vengeance.’

Bowers, 33, of Bamber Bridge, Preston, Lancashire, admitted causing death by careless driving and was sentenced to six months in jail, suspended for 12 months. He was also banned from driving for three years.

The tragedy occurred on January 21 2021 after Mrs Dumbuya, from Moston, Manchester, had set off to take her exam as part of her nursing degree at University of Bolton.

Mark Kellet prosecuting said: ‘At 8:42am Peniel Dumbuya received a call from his wife who told him the car had stopped on the motorway. He said she should put her emergency lights on and get out of the vehicle if she could. He then contacted Green Flag recovery for her.

‘But having contacted Green Flag, they informed Mr Dumbuya that they could not attend to assist unless the vehicle was on the hard shoulder or off the motorway.

‘Mr Dumbuya tried to contact his wife, Shirley-Ann, but could not get an answer so decided to drive her route in the hope of coming across her and helping.

‘As he approached junction 20, he saw emergency vehicles and a silver vehicle on the left-hand verge and recognised the number plate.

‘Police would not allow him to approach the vehicle. He described his feeling of having to go home and break the news to his children.’ 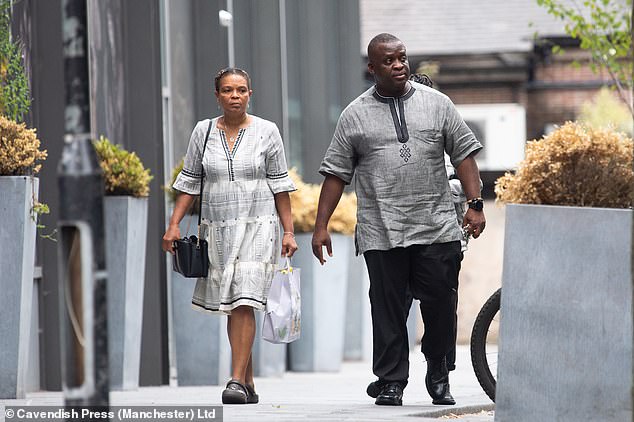 The court heard her husband, Peniel Dumbuya (pictured right), rushed to the scene to help his wife but the crash had already happened by the time he arrived 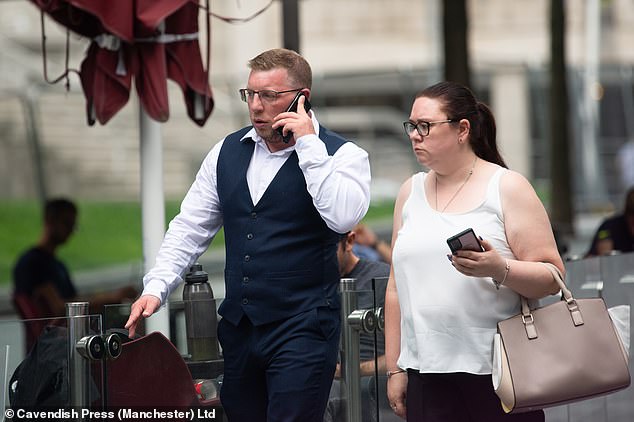 John Bowers (pictured left), who was driving the truck that crash into Mrs Dumbuya’s car, was given a suspended sentence and a driving ban after admitting causing death by careless driving

The court heard at least 19 other drivers spotted the stranded Kia with its hazard lights flashing and changed lanes to avoid it but Bowers who had been delivering a skip for his employers at J Dickinson and Sons failed to spot it and crashed into the rear.

As motorists tried to help Mrs Dumbuya as she lay trapped and unresponsive in the driver’s seat, a shocked Bowers repeatedly said, ‘I just didn’t see her.’

Dashcam analysis revealed Bowers, who had a previous conviction for drink-driving and driving without due care and attention from 2016, was travelling at 55 mph and had an unobstructed view of the Kia from about 150 to 175 metres away – but an accident report concluded he did not appreciate the Kia was stationary.

He initially denied wrongdoing but eventually pleaded guilty ahead of his trial 18 months later.

Mrs Dumbuya’s eldest daughter Alice, 19, wept as she gave a statement, telling the hearing: ‘Our lives have been shattered by something that was so avoidable.

‘My father received a telephone call from my mother, who is in complete panic after she had broken down in lane one of the M60.

‘They had actually swapped cars because the windscreen wipers were not working on her Nissan Qashqai and took his car instead.

‘After my father received the phone call, he drove to the M60 on the route he knew she would take only to find police, fire and ambulance crews and looked to his left in disbelief as he recognised the registration number of the Kia on the embankment.

‘A police officer asked him why he was there only for him to answer, “That is my wife.”

‘He was standing there helplessly and in disbelief seeing that mum had already passed away. 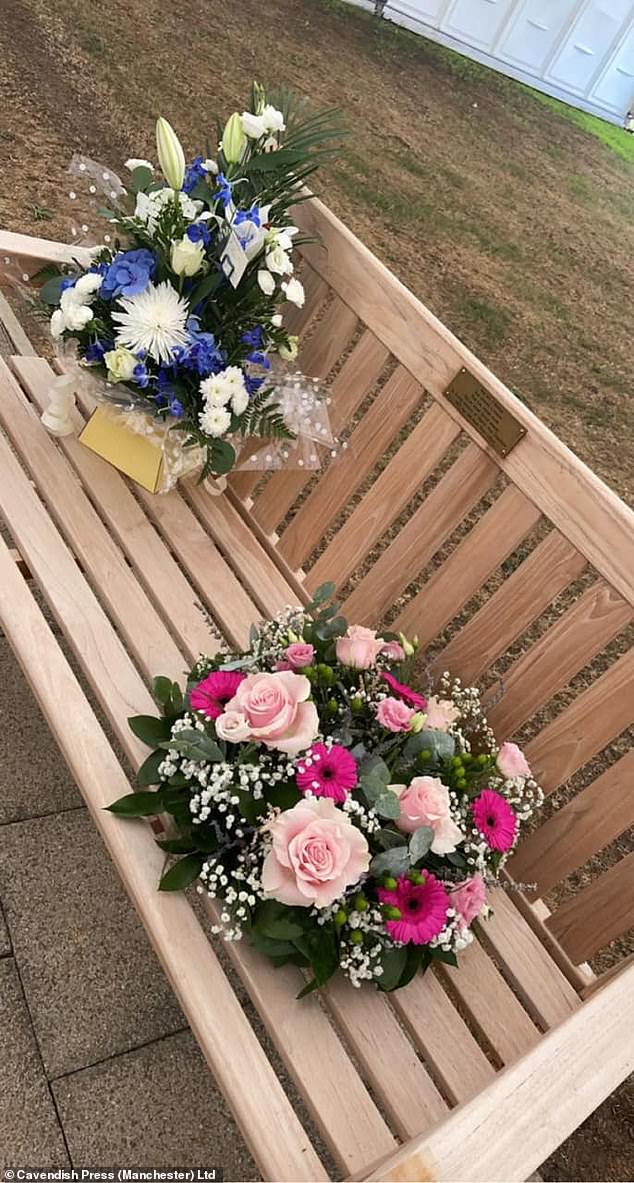 Mrs Dumbuya was awarded a posthumous degree by the University of Bolton following her death. Pictured is a memorial bench in her memory at the university 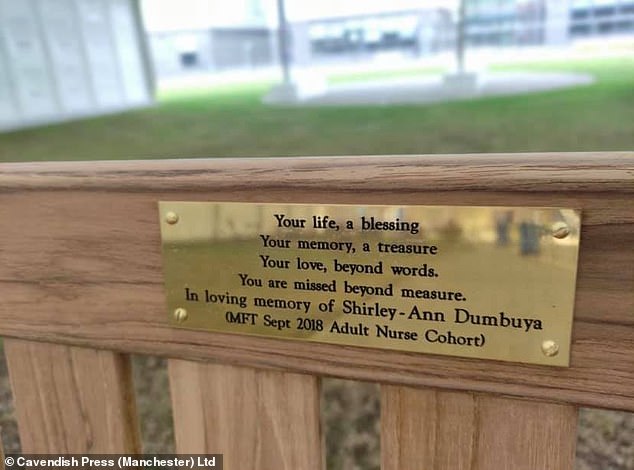 In an emotional impact statement, Mrs Dumbuya’s daughter Alice said: ‘Our lives have been shattered by something that was so avoidable’

She added: ‘He did go back to work for a short time but whilst driving his bus a similar skip wagon was driving towards him, and he went into a panic.

‘A replacement driver was sent to finish the bus journey and he has not been back to work since.’

She told Bowers: ‘You, by extending the case for 18 months has been so painful for us. You now taking some responsibility does not make it any easier for us but at least we know you feel some sort of remorse.

‘We know you did not get up that morning and decided you were going to kill someone, and we know it was a total accident.

‘But you must take responsibility for what has happened and not drag it out for 18 months. We felt as if you were blaming my mum for what happened.

‘She broke down in lane one, the car went into total engine failure. I can only imagine the panic and fright my mother must have felt, when she was on the phone to my dad screaming.

‘It wasn’t like she stopped and immediately hit from behind straight away. She had broken down, stopped and a number of minutes had gone by before she was hit. The collision could have been so avoidable.’