Why your first family pet is with you for life: As Kate and William mourn their dog Lupo, JOHN BANVILLE on the magical memories of his own cherished companion

Given the state of the world, can I really justify writing at length about a dead dog? And one that has been dead for 40 years, at that.

I know well the answer I shall be given by readers who don’t hold with keeping pets, and probably by some who do. And perhaps they will be right.

But consider this. We human beings are only animals who have learned to use our opposable thumb and not bite people, or not so often as to make society and social life insupportable.

Half a century has elapsed since Ben the Labrador came into our lives and, as I said, this year, precisely four decades have passed since he left it. 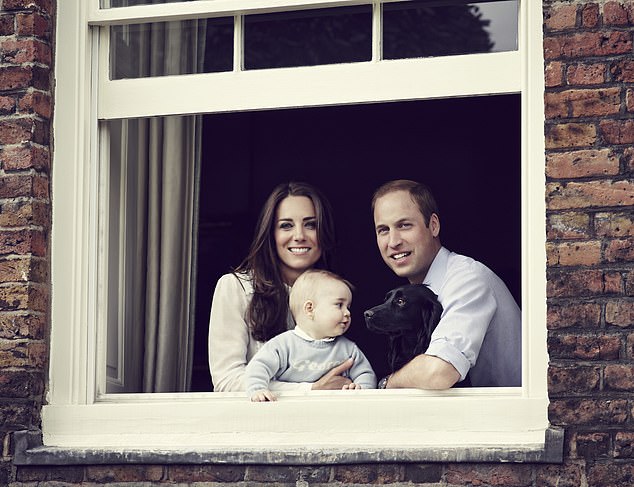 I know well the answer I shall be given by readers who don’t hold with keeping pets, and probably by some who do. And perhaps they will be right (pictured: the Duke and Duchess of Cambridge with their son Prince George and dog Lupo)

He was our first dog, and although he would by no means be our last, he is the one I remember most vividly and, I suspect, with the deepest affection.

Indeed, grief is not something strictly limited to the humans that we have loved.

It was late in the summer of 1969, and my wife and I had been married for only a couple of months when my mother announced that she wished to buy us a dog, as a belated wedding present.

I suspect she was dropping a self-defeating subtle hint about children and the importance of having some, soon.

My wife and I were products of the heedless Sixties and, at that time, starting a family was the last thing we were thinking of. 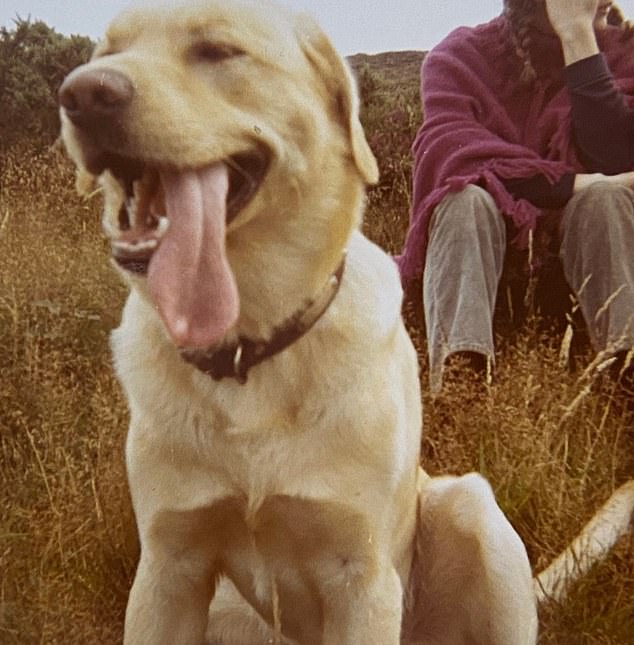 Half a century has elapsed since Ben the Labrador (pictured) came into our lives and, as I said, this year, precisely four decades have passed since he left it

Sexual intercourse may have begun in 1963, as the poet Philip Larkin wistfully suggested, but this was Ireland.

Friends of my father’s, a couple named Graveshead — he was a gentleman farmer, she rode to hounds — bred dogs and had some for sale.

We went out to their fine old country house one superb September afternoon and sat with them on the lawn drinking wine, gambolled about by a litter of half a dozen Labrador pups.

Ben — I can no longer recall why we fixed on that name — spotted us as just the pair of pets for him, and claimed us straight off as his own.

He was a few weeks old, and didn’t so much walk as tumble, like a larger version of those furballs you find under the bed after the cleaner has given the house-dust its weekly stirring up.

On our way home, Ben was sick in the car. We were assured this was the best thing that could have happened, since having done it once he would have ‘got it out of his system’.

There was a lot of ‘it’, for so small a system. 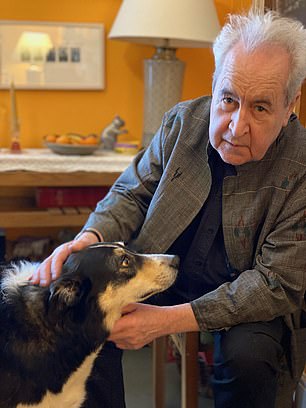 Rex, the border collie who is the present incumbent of the throne suspects me of treachery (pictured)

We humans are creatures with limited powers of foresight. Or better say, we can perfectly well anticipate what the results of our actions are likely to be, but prefer not to.

Folk who have introduced a three-week-old pup into their home will remember that moment when, awakened yet again by a piteous whining at 3am, or having cleaned up yet another mess on the kitchen floor, they look at each other and ask: ‘What have we done? What have we done?’

It might have been easier, my wife and I decided, if we had just gone ahead and had a baby. Now you’re talking, my mother would have said.

Ben did the best he could with us. After three or four months, he had more or less got the measure of his new family.

I was gruff, impatient, and out a lot. My wife took a more relaxed approach to things, but there were unfortunate aspects of her that he tried to correct, in vain.

Also, she didn’t seem to understand that a growing dog needed to be walked on average a dozen times a day. And she would share her bed with no creature that had a tail.

A particularly odd disorder that Ben’s two charges — that is, to say, my wife and I — suffered from was a form of intermittent semi-paralysis, to which we succumbed with seeming unconcern, even with pleasure.

We would take up an object made of paper — morning postal deliveries had taught him all about paper and its chewability — and sit in a chair and gaze at it intently for hours, sometimes.

We could have been much more usefully employed in playing with him, or walking him, or throwing things for him to chase — he was very indulgent of stick-throwing, and would run after the stick with energetic shows of enthusiasm, and sometimes would even bring it back.

Holidays were an unwelcome imposition.

He had his own patch, his own perimeters, and did not take kindly to being forced to leave them behind and be introduced to other houses, other fields, other stretches of seaside, and, most trying of all, other smells.

Though he did quite like travelling in the car, especially when he got to stick his head out of the window and let the wind make his ears flap.

Then, one day, his world changed, calamitously. Everything had been going along fine. He had us disciplined to the highest possible degree, given what poor material we were.

There was plenty of food for him, there was exercise — never enough, but the world is not perfect — and he had a warm place to sleep in and dream of chasing cats.

Things could have been worse. And then, all at once, they were.

Ben was three years old when our first son was born. A usurper! This was something Ben had not reckoned with, not in his worst cat-chasing dreams.

And, as if one wasn’t bad enough, soon a second little bruiser came along, screaming for attention.

But Ben was a stoic, and had, despite his ancient canine instincts, a good heart. He made the best of his altered circumstances.

And there were some things to be said for toddlers. They shattered for ever the hitherto tranquil surface of family life.

They were noisy, dirty and disruptive. They dropped food on the floor a lot, most of it mush but some of it quite tasty. And they loved roughhousing. The house had needed a bit of roughening.

Above all, they were at a manageable eye-level, so that in dealing with them a dog didn’t have that permanent crick in the neck caused by having to look up at the adults in the house, in order to monitor them by the look in their eye.

In time, as the children got older and he got older seven times faster, Ben assumed fully his role as guardian and protector — anyone who came near got a growl and a glare that made them step smartly back.

I think Ben got to like the boys — they were not only on his eye-level, but his mind-level, too.

It is estimated that an adult dog has the mental capacity of a six-year-old child. Though I’m not sure that applies to Labradors.

When one or other of us came in late at night he would rear up from his lair under the stairs and bark ferociously, as at an intruder, and then, seeing his mistake, would slink away in embarrassment.

Ben lived for ten years, and died in 1980 while we were in America, beyond urgent recall. He had been suffering from cancer, and none of us knew until it was too late.

I hope he didn’t suffer as sorely as I suspect he did. It saddens me still to think of poor Ben dying without us.

Ben sometimes comes padding into my dreams, all these years later.

He is a sentinel in my world of sleep, a wholly benevolent spirit. I feel he wishes me well. We should have called him Fido, the Faithful One. He was a dog, and had his day.

Just now I feel a wet nose nudge my leg. Rex, the border collie who is the present incumbent of the throne instituted by Ben the Begetter, suspects me of treachery.

The old king is dead, he admonishes me, and Rex rules in his place. I shall take him for a walk.

We tramp the selfsame fields where Ben and I used to wander, more than half a lifetime ago.