Israel has bombarded Palestinian Islamic Jihad (PIJ) positions in the Gaza Strip for a third day today with 31 Palestinians killed, while militants fired hundreds of rockets back amid escalating violence.

Six children are among the dead since the conflict began Friday, while 275 people have been wounded, said health authorities in the enclave where several buildings were reduced to rubble.

Israel launched its first bombardment on Friday as part of a surprise operation named ‘Breaking Dawn’ that the Israel Defence Forces (IDF) said was a ‘pre-emptive strike’ designed to thwart a planned PIJ rocket attack.

The IDF early this morning continued their intense aerial and artillery bombardment of the Iran-backed group, which has fired hundreds of rockets in return since Friday.

Israeli authorities said one of their attacks late last night killed a PIJ commander Khaled Mansour, who was believed to have been hiding in an apartment building in the Rafah refugee camp in southern Gaza, but several Palestinian civilians were also killed in the blast.

The fighting is the worst in the region since an 11-day war in May 2021 between Israeli forces and Hamas, the Gaza strip’s de-facto governing authority, which devastated the impoverished coastal territory home to some 2.3 million Palestinians and forced Israelis to seek shelter from rockets. 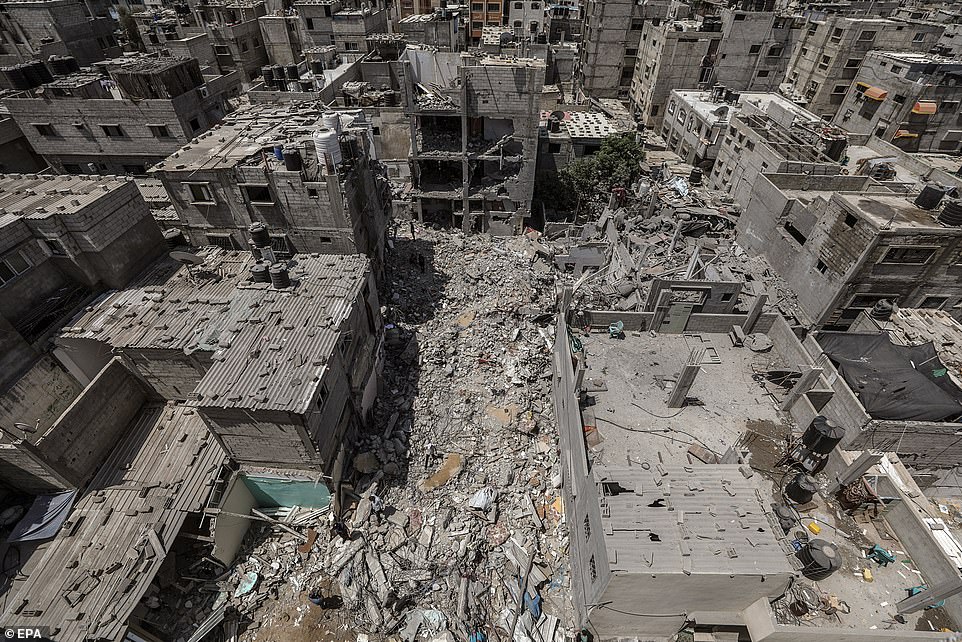 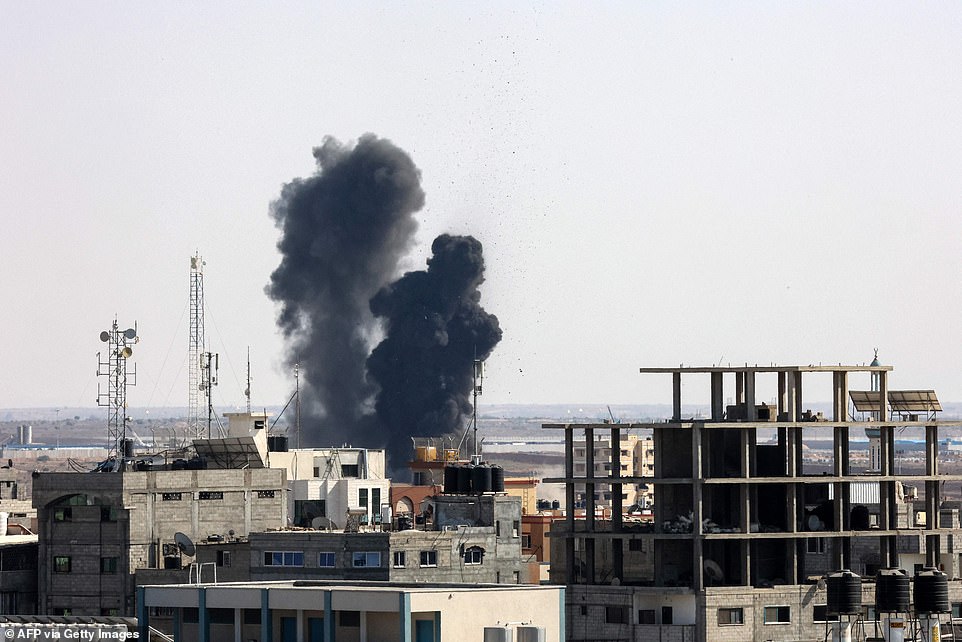 Smoke billows from a building struck during an Israeli air strike which is thought to have killed an Islamic Jihad commander in Rafah in the southern Gaza Strip, on August 7, 2022 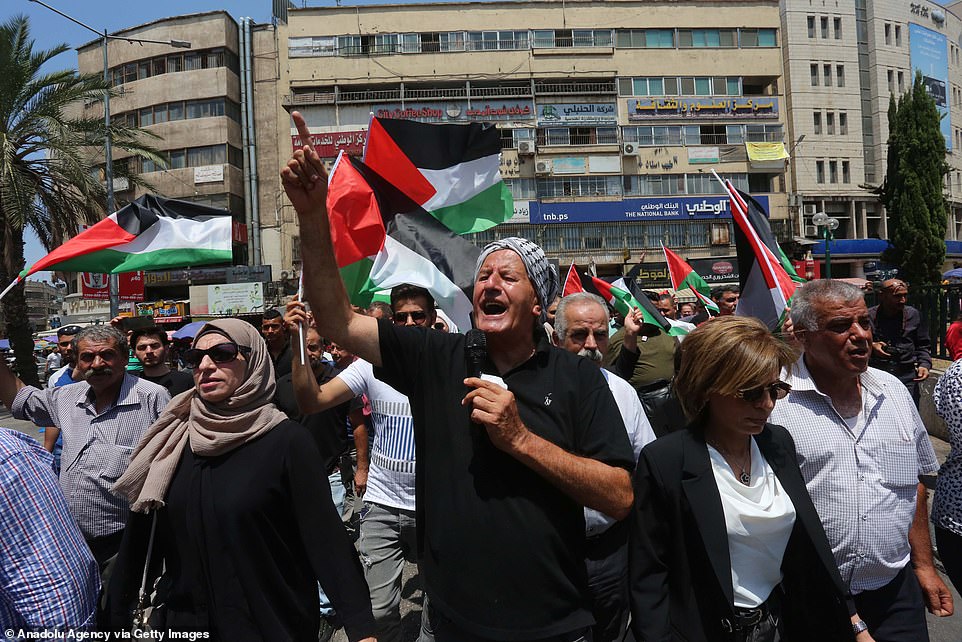 Palestinians gather to stage a protest against Israel’s attack on Gaza in Nablus, West Bank on August 07, 2022. The Palestinian death toll from the past three days’ worth of attacks has now reached 31 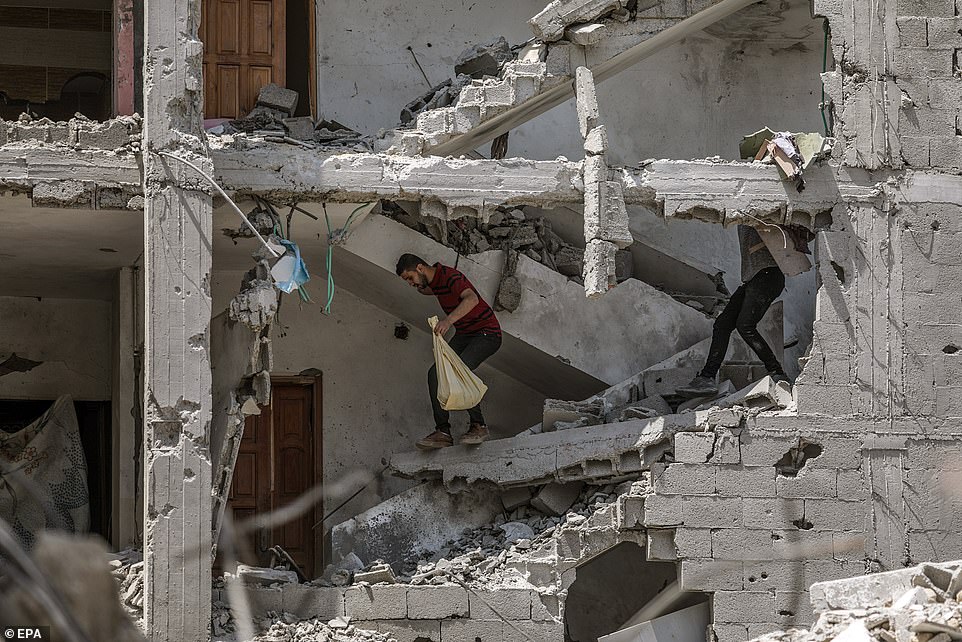 A Palestinian inspects a destroyed house after an Israeli air strike in Rafah town, Gaza Strip 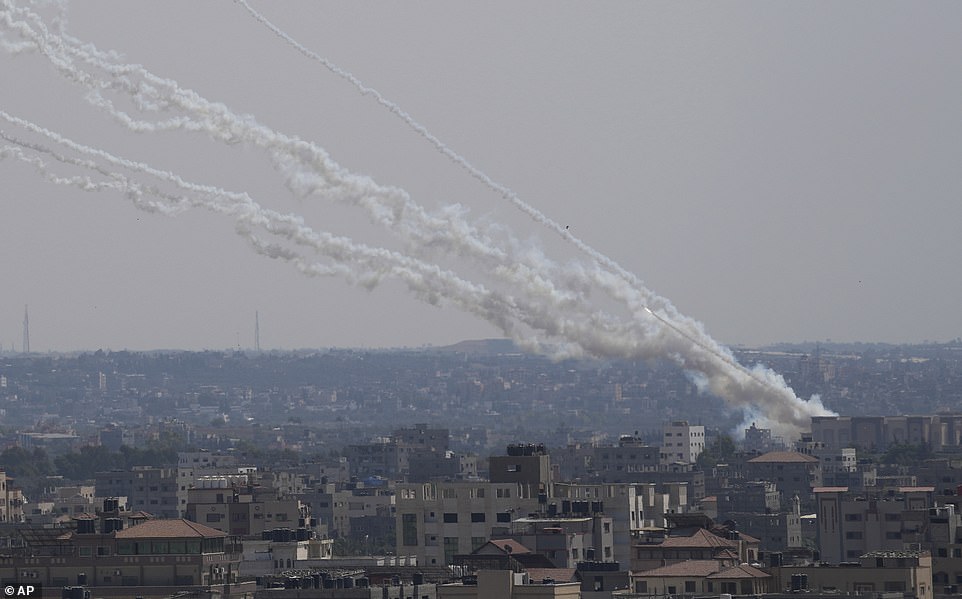 Islamic Jihad rockets are launched from the Gaza Strip towards Israel, in Gaza City, Sunday, Aug. 7, 2022

‘Suddenly, without warning, the house next to us was bombed and everything became black and dusty with smoke in the blink of an eye,’ said Wissam Jouda, who lives next to the targeted building in Rafah.

Ahmed al-Qaissi, another neighbour, said his wife and son were among the wounded, suffering shrapnel injuries.

The Rafah strike was the deadliest so far in the current round of fighting initiated by the IDF.

Israel has said it took action against the PIJ because of concrete threats of an imminent attack, but has not provided details.

Caretaker Prime Minister Yair Lapid, who is an experienced diplomat but untested in overseeing a war, unleashed the offensive less than three months before a general election in which he is campaigning to keep the job.

In a statement Sunday, Lapid said the military would continue to strike targets in Gaza ‘in a pinpoint and responsible way in order to reduce to a minimum the harm to noncombatants.’

But the IDF estimates their airstrikes have killed about 15 militants, suggesting that more civilians than PIJ member have died as a result of the strikes.

Lapid said the strike that killed Mansour was ‘an extraordinary achievement’, adding that ‘the operation will continue as long as necessary’.

Hundreds of Palestinians today took to the streets to protest what they see as yet more unnecessary violence from Israel, while hundreds more attended funerals for Mansour and others killed in the airstrikes. 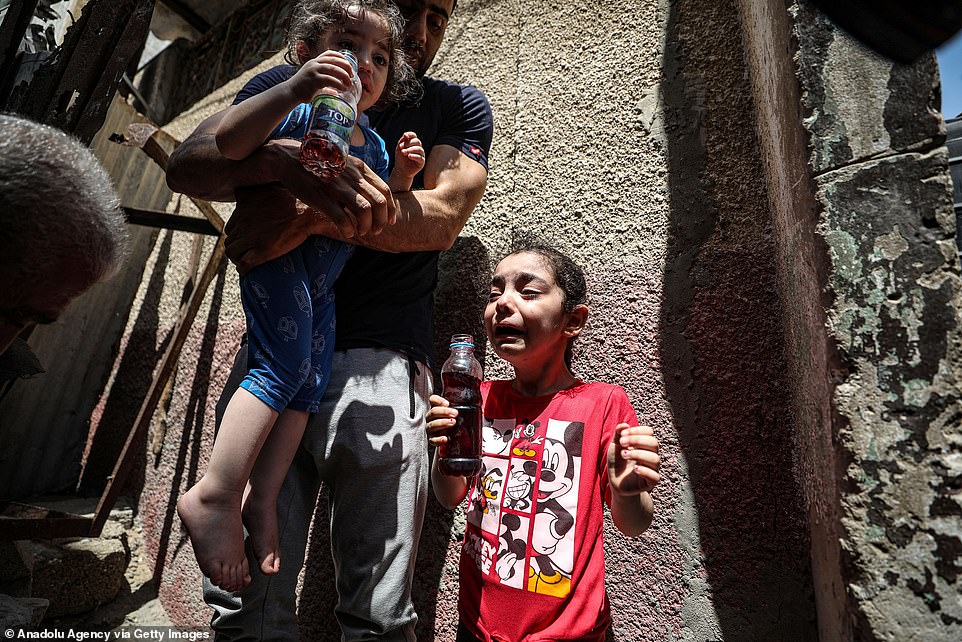 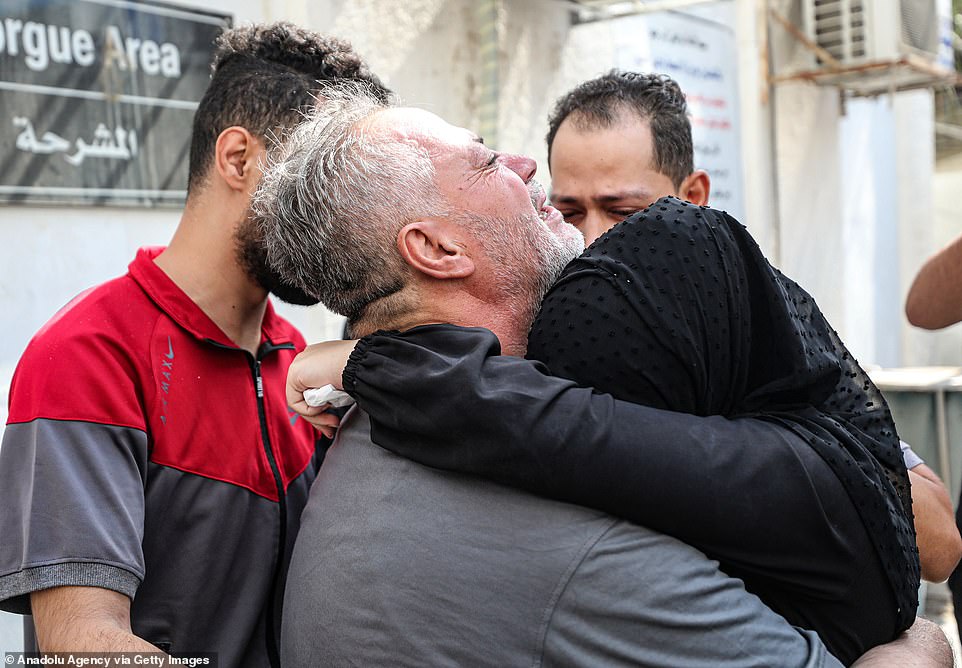 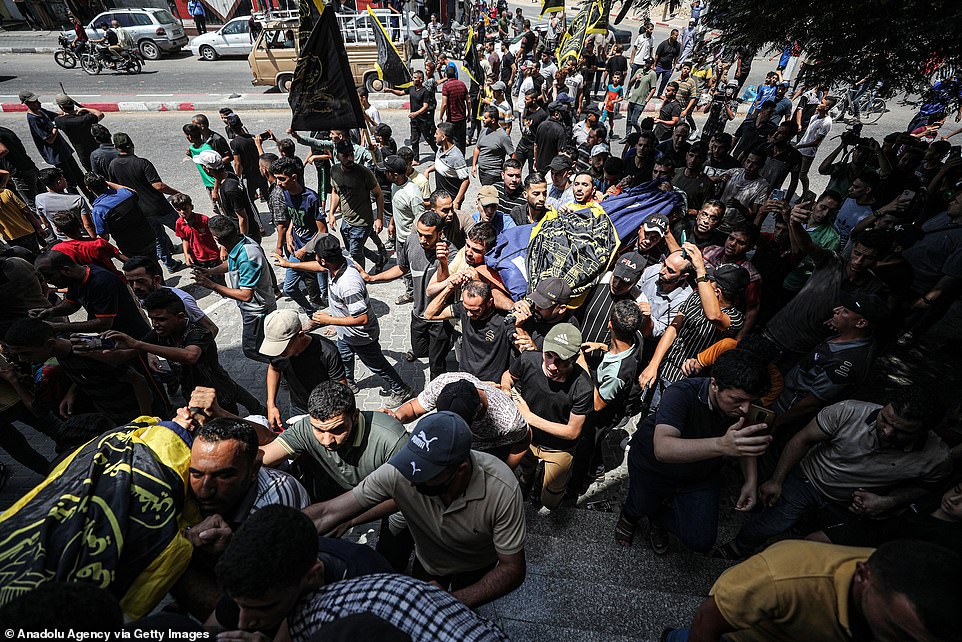 People attend the funeral ceremony of Palestinians, who lost their lives in Israel’s attacks, in Rafah, Gaza 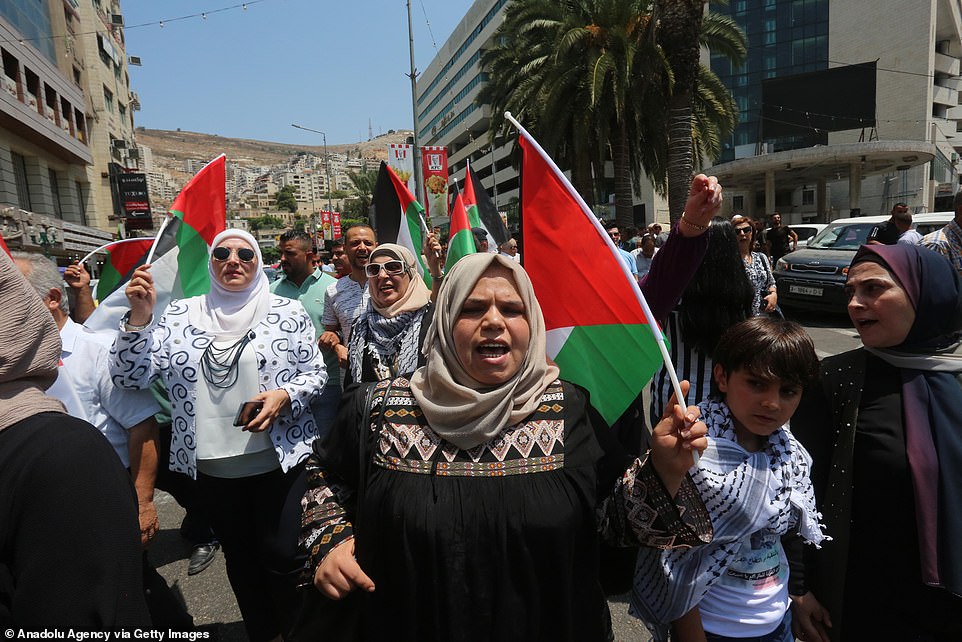 Hundreds of Palestinians have taken to the streets to protest against the violence amid Israel’s airstrikes which have killed 31, including more than 15 civilians, since Friday 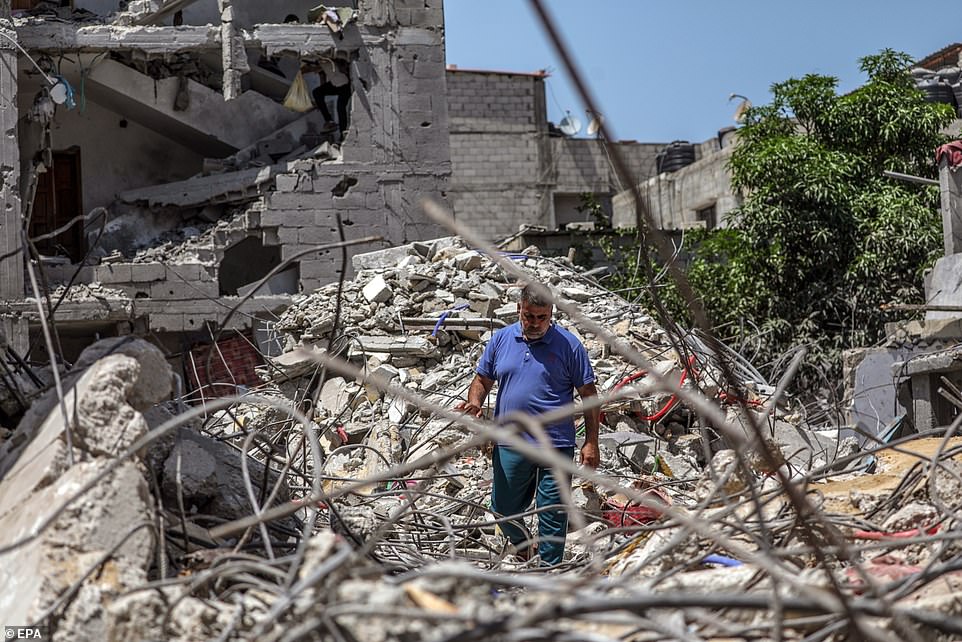 PIJ has fewer fighters and supporters than Gaza’s de-facto rulers Hamas, and little is known about its weapons arsenal.

Both groups call for Israel’s destruction but have different priorities, with Hamas constrained by the demands of governing and keen to stay out of conflicts since the 11-day-war with Israel last year.

Air-raid sirens rang out in Jerusalem for the first time since the war last May, after a handful of the PIJ rockets fired towards Israel were headed for the holy city, though Israeli authorities said their missile defence systems had shot down the threats.

Daily life in the Gaza Strip has come to a standstill, with the sole power station shut down due to a lack of fuel after Israel closed its border crossings in the wake of its attacks on Friday.

Gaza’s health ministry said earlier today that it only had enough fuel for its power generators to last two days before vital services would be cut.

The United Nations humanitarian agency OCHA has warned of the ‘severe risk’ to the ‘continuation of basic essential services’.

‘Each day we wake up to child and women martyrs… there is killing and wounding and people displaced,’ said Gaza City resident Abu Mohammed al-Madhoun, 56. ‘We hope that Israeli aggression will end’.

A ceasefire proposed to both sides by Egyptian authorities was accepted for 8pm BST tonight, according to security sources in Cairo, but official spokespeople for Israel and the PIJ have not yet confirmed whether the truce would go ahead.