The families of three men who were brutally murdered by a terror cell from the so-called Islamic State have said they are ‘deeply concerned’ about a ruling made by the UK’s highest court.

The Supreme Court ruled on Wednesday that it was unlawful for the UK Government to share evidence with the US authorities about El Shafee Elsheikh and Alexanda Kotey.

The pair, who were caught in January 2018, are accused of belonging to a brutal four-man cell of executioners in Syria, nicknamed The Beatles because of their British accents, responsible for killing 27 captives.

Their capture sparked an international row over whether they should be returned to the UK for trial or face justice in another jurisdiction – though the Crown Prosecution Service (CPS) is reviewing the case and may bring a prosecution. 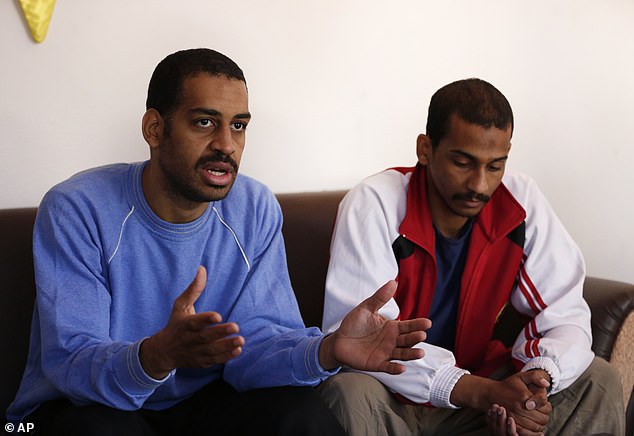 In this March 30, 2019, file photo, Alexanda Amon Kotey, left, and El Shafee Elsheikh, who were allegedly among four British jihadis who made up a brutal Islamic State cell dubbed ‘The Beatles,’ speak during an interview at a security center in Kobani, Syria, Friday, March 30, 2018

In a joint statement released on Friday evening, the parents of three American men held captive before being beheaded by the cell said they wanted the accused killers to face justice in the US.

The statement read: ‘We the parents of James Foley, Abdul-Rahman Peter Kassig, and Steven Sotloff … are deeply concerned about this week’s United Kingdom Supreme Court ruling.

‘The decision … has serious implications for accountability for their brutal crimes against our children.

‘We want Kotey and Elsheikh to be forced to face their crimes in front of a US Federal Criminal Court under Article III of our Constitution. 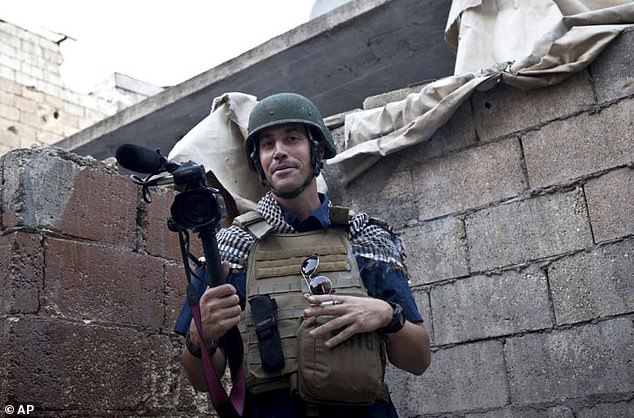 In this November 2012 file photo, posted on the website freejamesfoley.org, American journalist James Foley is pictured while covering the civil war in Aleppo, Syria. In a horrifying act of revenge for US airstrikes in northern Iraq, militants with the Islamic State extremist group beheaded Foley 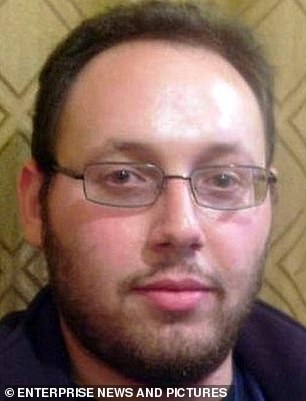 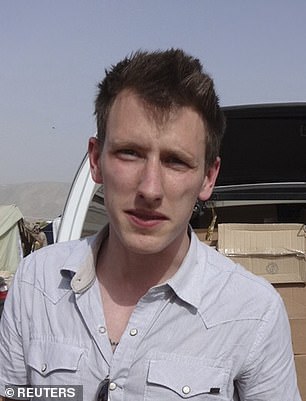 American journalist Steven Sotloff, left, and aid worker Abdul-Rahman (Peter) Kassig (right) were executed by ISIS during their campaign of terror across Syria and Iraq

‘Only this would hold them fully accountable for the horrific acts they have committed against our sons.’

The statement, issued by the James W Foley Legacy Foundation on behalf Diane and John Foley, Ed Kassig and Rhonda Schwindt, and Shirley Pulwer and Arthur Sotloff, urged co-operation between the UK and US to ensure the pair will be tried in America.

It continued: ‘We implore both UK and the US to work together to ensure that these men are prosecuted before a US Federal Criminal Court to the fullest extent of the law. 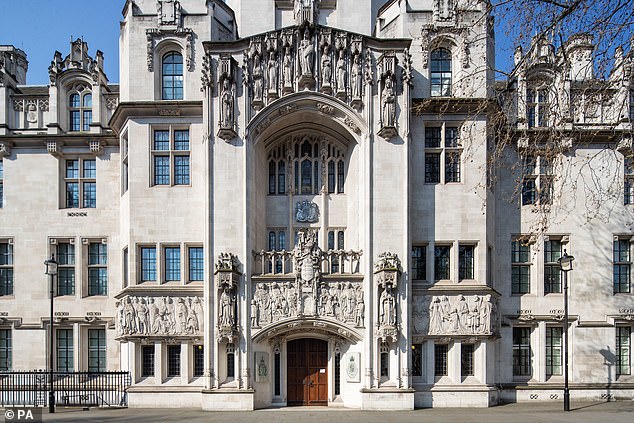 File photo of the UK Supreme Court in London on Friday. The Supreme Court ruled on Wednesday that it was unlawful for the UK Government to share evidence with the US authorities about El Shafee Elsheikh and Alexanda Kotey 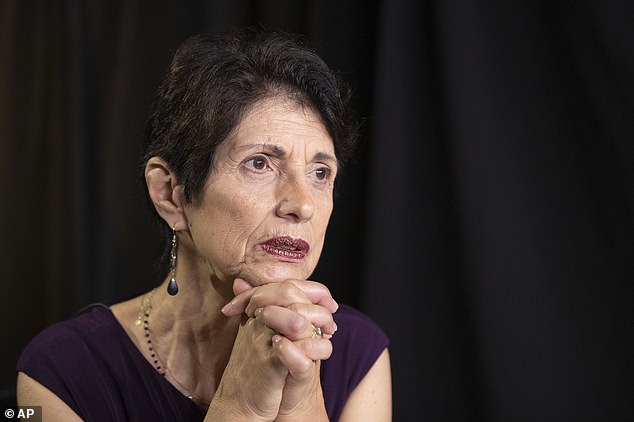 In this June 19, 2019 file photo, Diane Foley, mother of journalist James Foley, who was killed by the Islamic State terrorist group in a graphic video released online, speaks in an interview in Washington

‘Only this will fulfil our commitment as nations to truth, justice and accountability, and demonstrate our resolute adherence to the rule of law, a principle upon which all democracies are built, and the foundations for which criminal organisations like IS will be defeated.’

On Wednesday, a panel of seven justices ruled that then-home secretary Sajid Javid’s decision to share evidence with the US was unlawful and was made at a time when when UK authorities were coming under ‘political pressure from the US’.

They also said that the pair may face trial in this country following a reconsideration of the case by the CPS.

Elsheikh’s mother, Maha Elgizouli, brought a challenge to Mr Javid’s decision to share evidence with American authorities without seeking assurances the men would not be executed if convicted in the US. 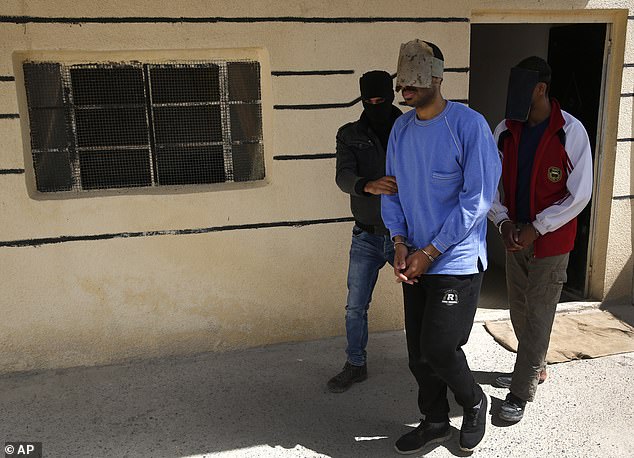 A Kurdish security officer escorts Alexanda Amon Kotey, left, and El Shafee Elsheikh, who were allegedly among four British jihadis who made up a brutal Islamic State cell dubbed ‘The Beatles,’ for an interview with The Associated Press at a security center in Kobani, Syria, Friday, March 30, 2018 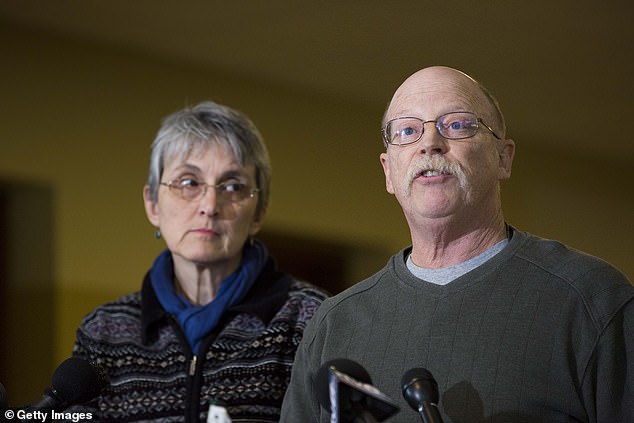 Ed Kassig (right) and Paula Kassig (left) speak to the media about the recent execution of their son Peter Kassig by ISIL forces on November 17, 2014 at Epworth United Methodist Church in Indianapolis, Indiana. Kassig was a US aid worker and former Army Ranger, and was executed after being held hostage for over a year by ISIL 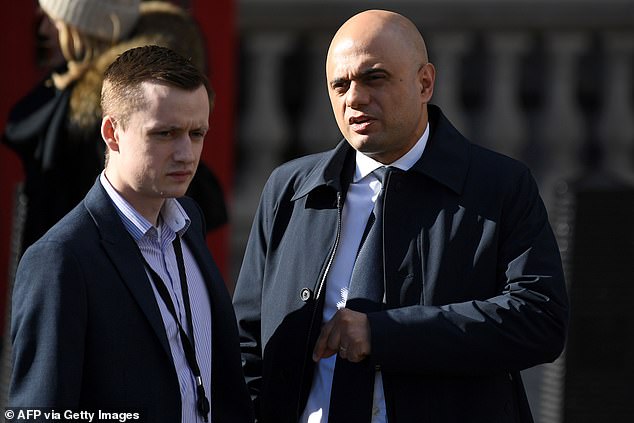 Her case was dismissed by the High Court in January last year, but her appeal was unanimously allowed by the Supreme Court justices.

Announcing the court’s decision, Lord Kerr said the decision was ‘based on political expediency, rather than strict necessity’ under the statutory criteria.

The Home Office said in a statement that it was ‘disappointed’ with the ruling, adding: ‘The Government’s priority has always been to maintain national security and to deliver justice for the victims and their families. This has not changed.’

In June 2018, Mr Javid authorised the sharing of 600 witness statements gathered by the Metropolitan Police under a ‘mutual legal assistance’ agreement in a letter to then-US attorney general Jeff Sessions.

Mr Javid faced intense criticism after the letter to Mr Sessions was leaked, with MPs accusing him of breaching the UK’s long-standing opposition to the death penalty. 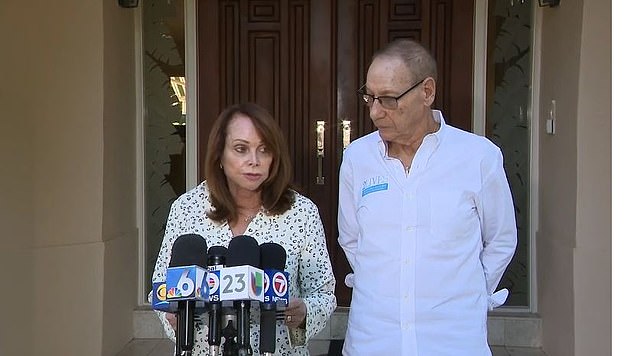 Then-prime minister Theresa May supported Mr Javid’s original decision, which was also backed by Prime Minister Boris Johnson when he was foreign secretary.

Kotey and Elsheikh, who were raised in the UK but have been stripped of their British citizenship, were captured by the Syrian Democratic Forces in January 2018.

At a hearing last July, Ms Elgizouli’s lawyers said a response by the Director of Public Prosecutions to a separate legal challenge indicated that there is enough evidence for them to face trial in the UK.

The Supreme Court was told there was a ‘historical decision in February 2016’ by the CPS that there was enough evidence to charge Kotey with five offences of murder and eight of hostage taking, and to prosecute Elsheikh for membership of a terrorist organisation. 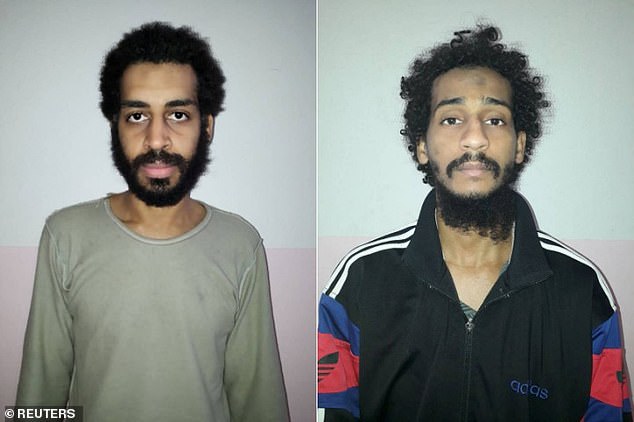 The CPS concluded there was ‘insufficient evidence’ to prosecute them in the UK, but is now understood to be reconsidering the decision now they are in US custody and no longer with Syrian forces.

They are said to have been members of the cell that also included Mohammed Emwazi, known as Jihadi John, who was killed in a US air strike in 2015, and Aine Davis, who has been jailed in Turkey.

Emwazi appeared in a number of videos in which hostages, including British aid workers David Haines and Alan Henning and US journalists James Foley and Steven Sotloff, were killed.