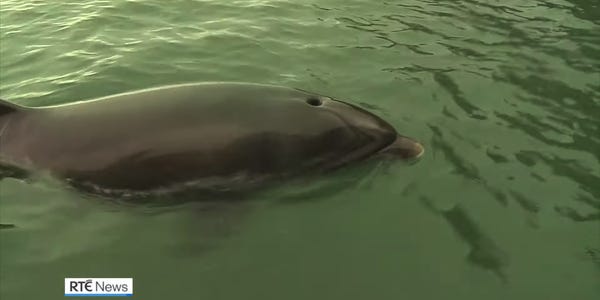 A beloved wild bottlenose dolphin in southwestern Ireland has gone missing for nearly two weeks, and locals fear he may have died.

Fungie first appeared in Dingle Bay in County Kerry in 1983, and has called those waters home ever since.

Since then the solitary dolphin has become a tourist attraction, and Dingle Bay has created an economy geared toward helping tourists catch a glimpse of him.

So when Fungie hadn't been spotted for two days in a row on October 14, some locals with boats started sunrise-to-sunset searches for the dolphin, to no avail, according to the Irish Examiner.

Fungie still hasn't been spotted, and fears are now rising that he may have died. It's unclear how old Fungie was when he first arrived in Kerry in 1983.

Gary Brosnan, a boatman aiding in the search for Fungie, told RTÉ on October 17 that the situation is "fairly serious now."

"Fungie very, rarely leaves the mouth of the harbor and he has never, ever been missing for this long," Brosnan said.

Some County Kerry locals have in recent days claimed to have seen Fungie since his disappearance, but not in the waters he frequents, according to the Irish Post.

A fisherman named Paul Hand also told RTÉ that Fungie came up along the left-hand side of his boat the morning of October 15.

"It was definitely him?" the reporter asked Hand.

Some locals have theorized that Fungie either followed a school of fish out to sea while hunting, or is avoiding other dolphin pods that have come into the bay in recent days, the Irish Post reported.

In 2019, Fungie set a Guinness World Record for being the longest-living solitary dolphin.