Dubai: Iran has allowed some businesses in the capital Tehran to reopen as the country's daily death toll from the new coronavirus fell to 73, its lowest in more than a month.

So-called low-risk businesses – including many shops, factories and workshops – resumed operations in Tehran on Saturday, a week after reopening in the rest of the country, state television said. 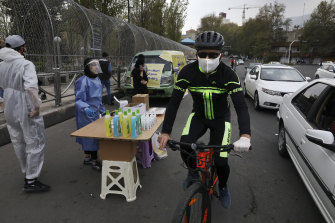 A cyclist rides past a group of people selling hand sanitiser in Tajrish square in northern Tehran, Iran.Credit:AP

Television footage showed health inspectors visiting shops and reminding a baker that he was required to wear a mask despite working near a hot oven. Others inspectors were seen controlling stores where employees handed out gloves to customers.

The reopening, announced earlier this month, came as official figures showed daily deaths from the new coronavirus fell to 73 on Saturday, the lowest since March 12.

That brought the total death toll to 5031, health ministry spokesman Kianush Jahanpour said. Saturday marked the fifth consecutive day with a death toll under 100 in Iran, one of the worst-hit countries in the Middle East.

The total number of people diagnosed with COVID-19, the disease caused by the new virus, reached 80,868 as the country recorded 1374 new cases in the past 24 hours, the spokesman said on state TV. 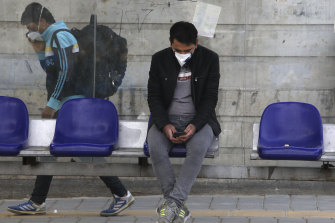 A man waits at a bus stop in Niavaran, northern Tehran, where officials have begun easing the lockdown.Credit:AP

Meanwhile, Supreme Leader Ayatollah Ali Khamenei said in a fatwa, or religious ruling, that believers may abstain from fasting during the Muslim holy month of Ramadan if it threatens their health.

"The fast is a religious necessity and a pillar of Islamic law and it is not permissible to abstain from fasting …unless one has a rational belief that fasting may cause a sickness, worsen a disease or prolong it," Khamenei said in the ruling published on his official website.

In a speech earlier this month, Khamenei called on Iranians to create the sense of Ramadan in their homes, since public gatherings are likely to be banned because of the coronavirus outbreak when the fasting month starts around April 23.

A parliamentary report released earlier this week, however, suggested the coronavirus death toll might be almost double the figure announced by the health ministry, and the number of infections eight to 10 times more.

Many government offices had already re-opened last week, with one-third of their staff working from home.

There was heavy traffic in Tehran on Saturday and people applying for state support crowded some offices, drawing warnings from officials about a resurgence of the virus.

"The coronavirus is still in an epidemic stage in Tehran … and the heavy traffic is a cause of increased concern," state media quoted Alireza Zali, head of the government-run coronavirus task-force in the capital, as saying.

High-risk businesses including theatres, gyms, saunas, beauty salons, and shopping centres have yet to re-open and restaurants are open only for take-away orders.

Schools and universities remain closed, and a ban on cultural, religious and sports gatherings has been imposed.