Read the room, Boris: Video shows the excruciating Cabinet meeting where PM sat with his head bowed as his political assassins prepared to plunge the knife

Boris Johnson’s ship began sinking today during a toe-curling Cabinet meeting where his ministers sat listening to him ‘with faces like smacked ar**s’ including the men who knifed him: Rishi Sunak and Sajid Javid.

The Prime Minister told his sombre top team they must ‘help people through the current difficult times’ – an apt message given his own woes – but judging by the ashen faces as the TV camera panned around the room in Downing Street this morning it appears some were already considering their futures.

‘A picture paints a thousand words,’ one senior Tory official told the FT, suggesting that Mr Johnson will have regretted letting in the press when his ministers looked so miserable. One critic tweeted afterwards: ‘Now we know why they all had faces like smacked a***s this morning, they knew their ship was sinking’.

Health Secretary Sajid Javid, the first to quit this evening, kept his head down and looked at his papers, before scribbling furiously on his pad as Mr Johnson began speaking. And the usually excitable Tory leader also bowed his head at times as he sat next to his chancellor Rishi Sunak, who also walked out on Mr Johnson tonight.

Further to his left, Work and Pensions Secretary Therese Coffey even appeared to be glaring at the PM. Ms Coffey was sent out to bat for Johnson over the weekend over the Chris Pincher scandal and is said to be considering her position.

The camera then panned around the table, stopping on a stony-faced Nadine Dorries and Jacob Rees-Mogg, who have both said they are ‘100 per cent’ loyal to the Tory leader. Suella Braverman, the Attorney General, stared blankly ahead next to a miserable Chris Heaton-Harris, the chief whip, whose job is to keep Mr Johnson’s MPs on side and is holed up with the PM in No 10 tonight.

While Levelling Up Secretary Michael Gove sat rubbing his fingers along his lips in the direction of Mr Javid, with some Westminster watchers pondering if it might have been a ‘secret signal’. 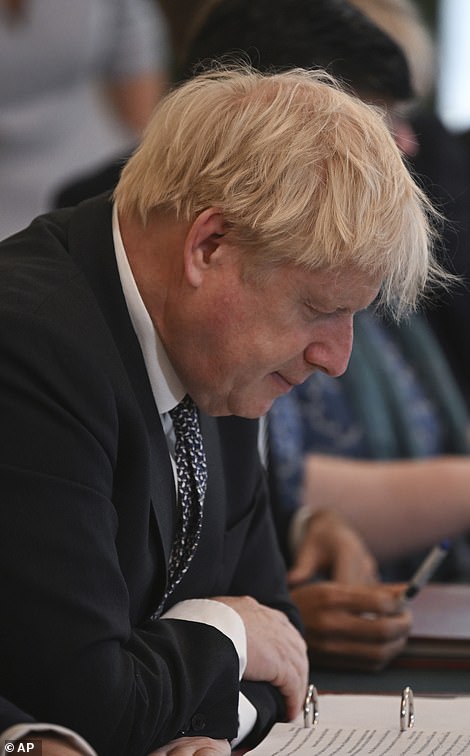 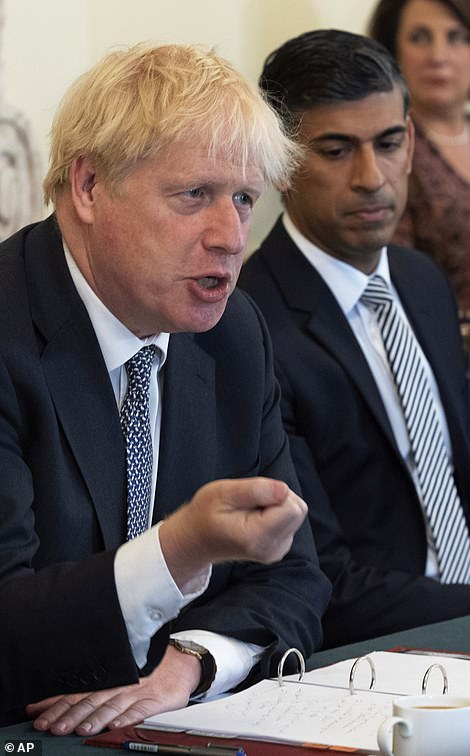 Head bowed, Boris Johnson at the Cabinet meeting before several ministers quit. Rishi Sunak was among the ministers who walked out – and sat to the PM’s left today. He would resign, telling the Prime Minister that standards in Government are ‘worth fighting for’. 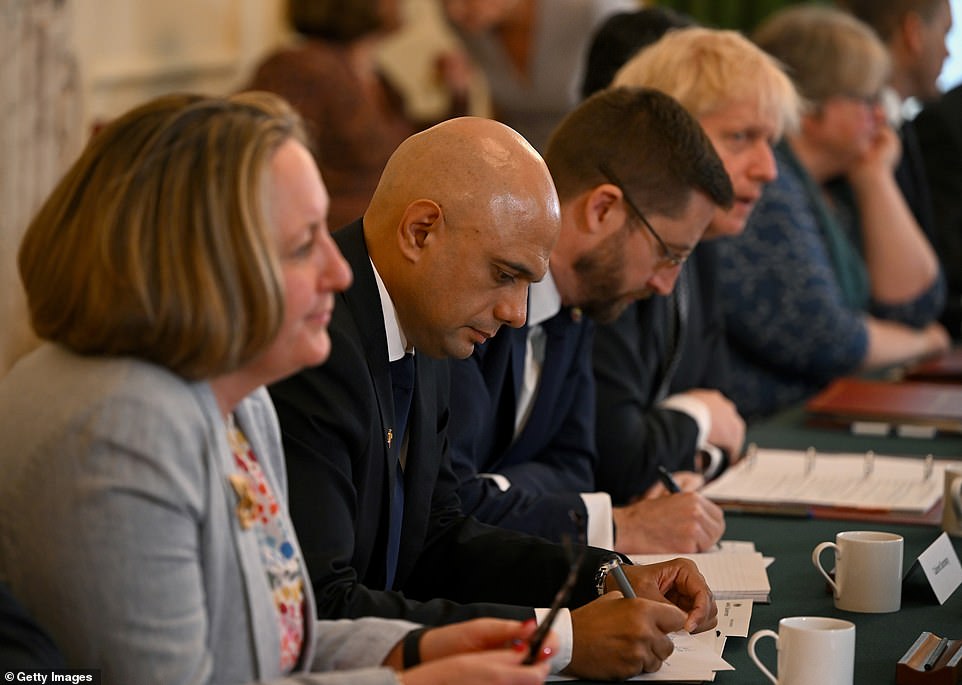 In a hint of what was to come, Sajid Javid looked grim and had his head bowed. He resigned as Health Secretary this evening 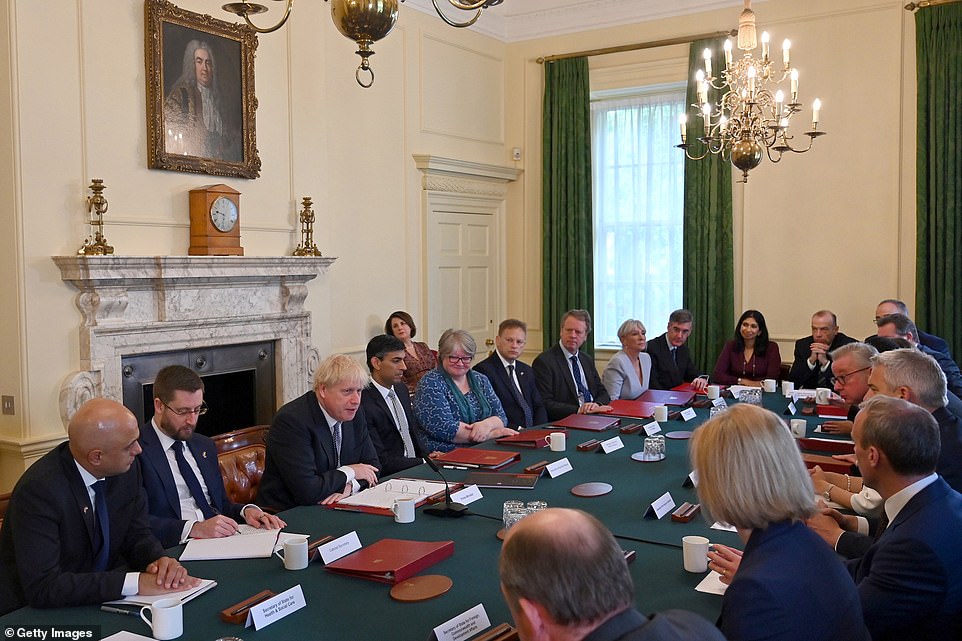 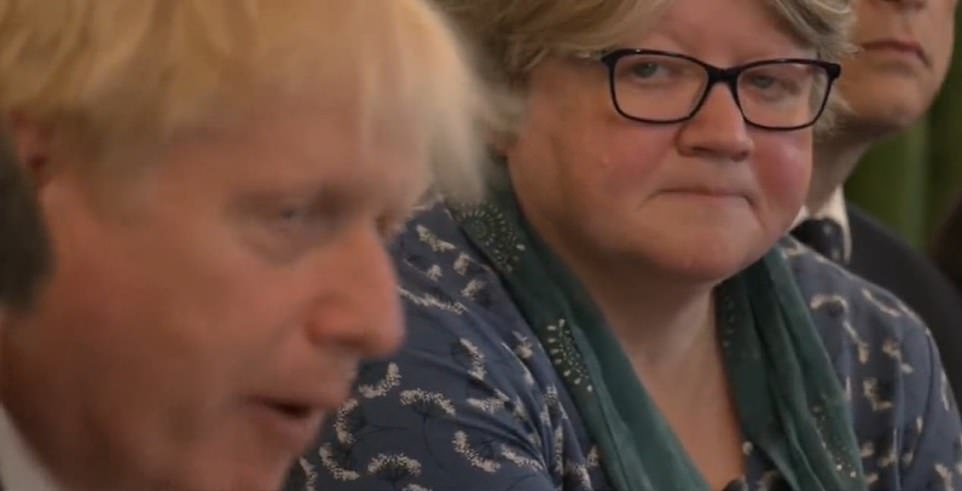 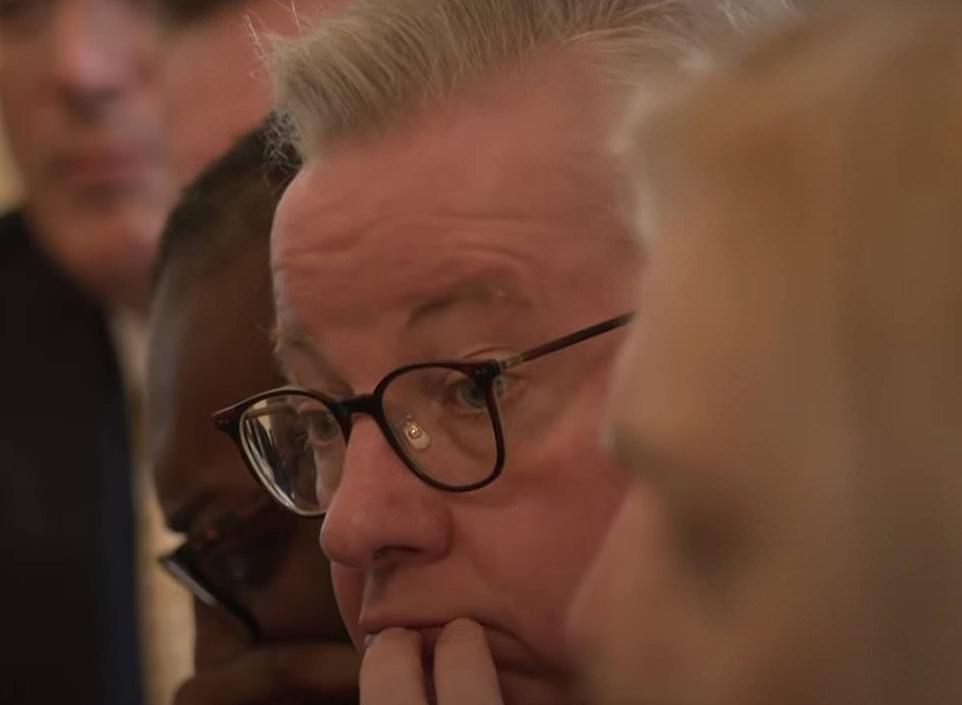 Michael Gove, who appears to be staying in the job, sat playing with his lips 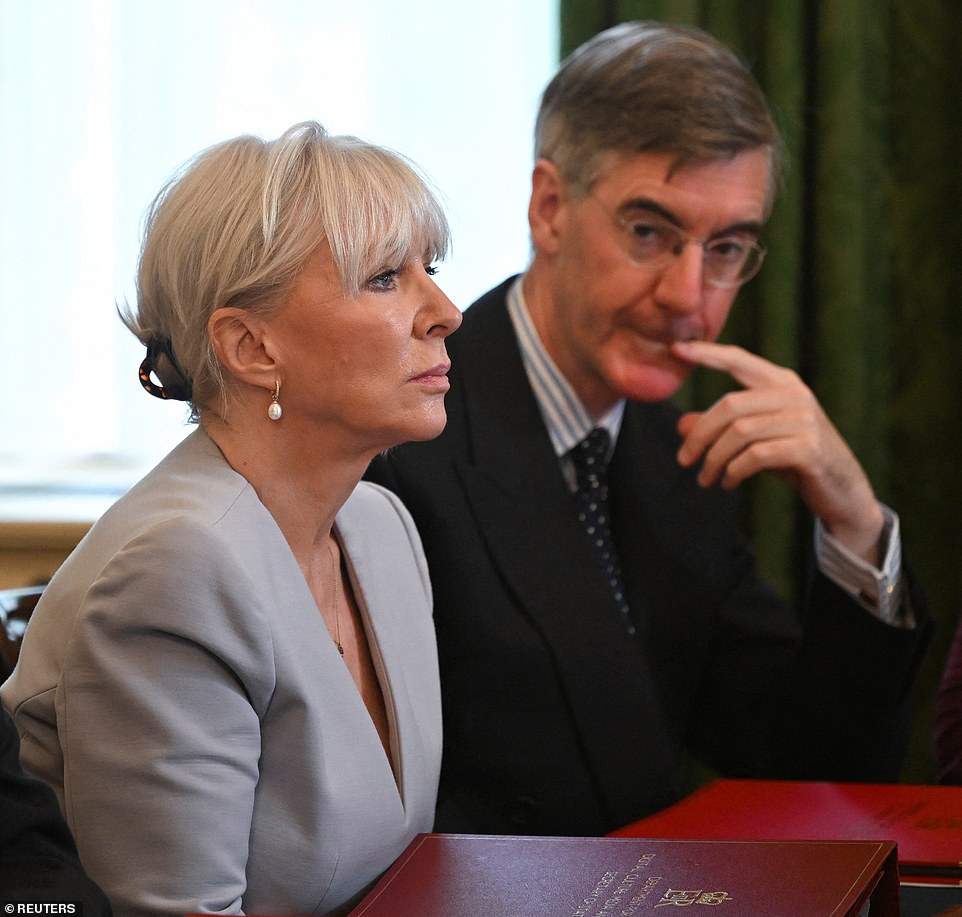 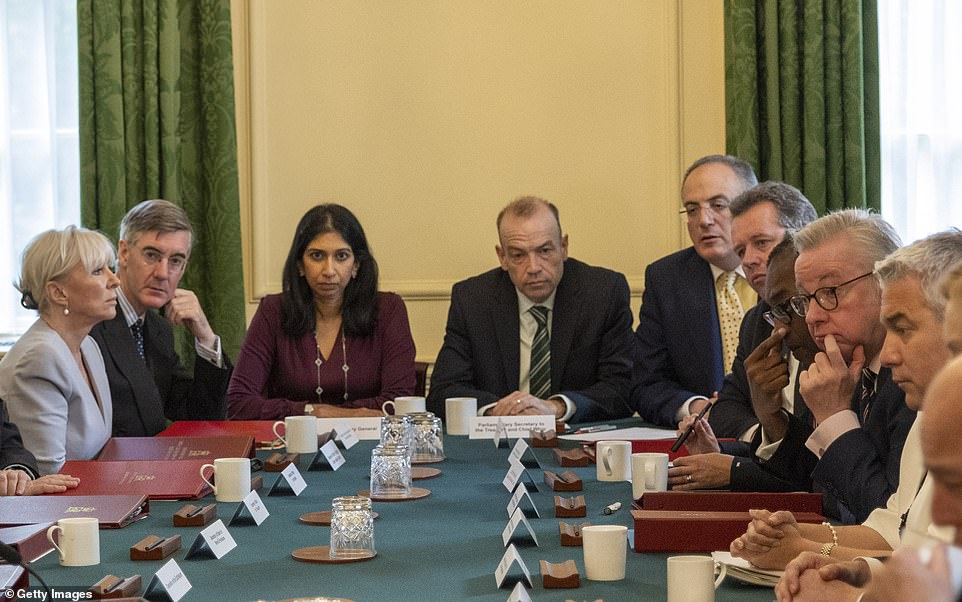 Hours later Boris Johnson’s premiership was left teetering on the brink after Rishi Sunak and Sajid Javid both dramatically quit his Cabinet in a seemingly coordinated attack at 6pm.

The Chancellor and Health Secretary dropped their bombshells on the PM within minutes of each other, shortly after he issued a grovelling apology over his appointment of shamed MP Chris Pincher. Bim Afolami, the Conservative Party vice-chair, also resigned.

In his resignation letter, Mr Sunak told the PM that ‘we cannot continue like this’. Acknowledging that he might be waving goodbye to his ministerial career for good, he added: ‘The public rightly expect Government to be conducted properly, competently and seriously.’

The double-pronged assault leaves the PM struggling desperately to cling on – and waiting anxiously to see if any of his other senior ministers will follow suit. 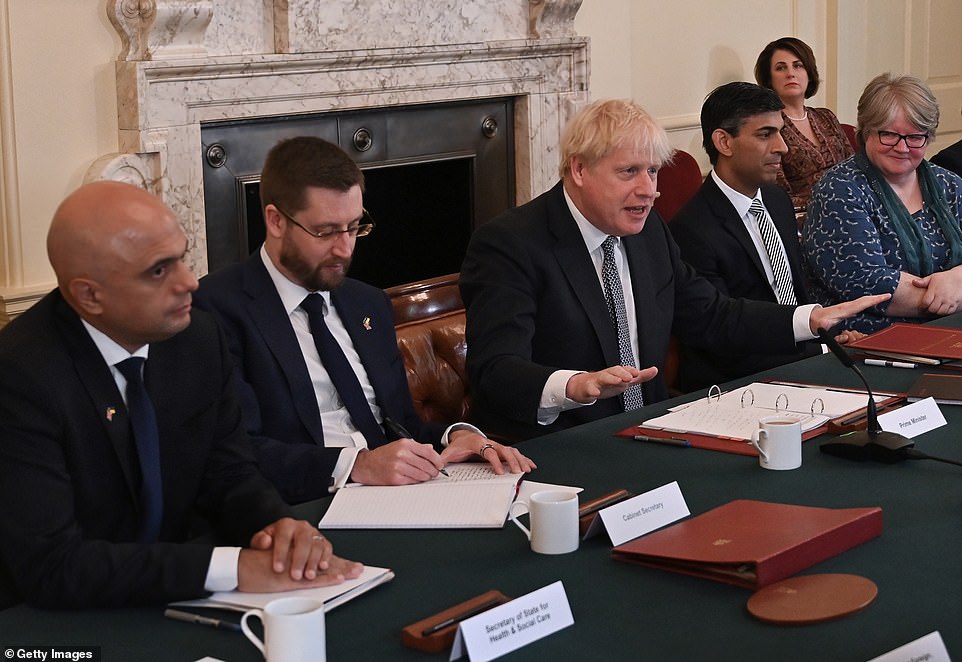 Cabinet Secretary Simon Case took notes as the PM raised his hands and made a point. Therese Coffey smiled but Mr Javid and Mr Sunak did not 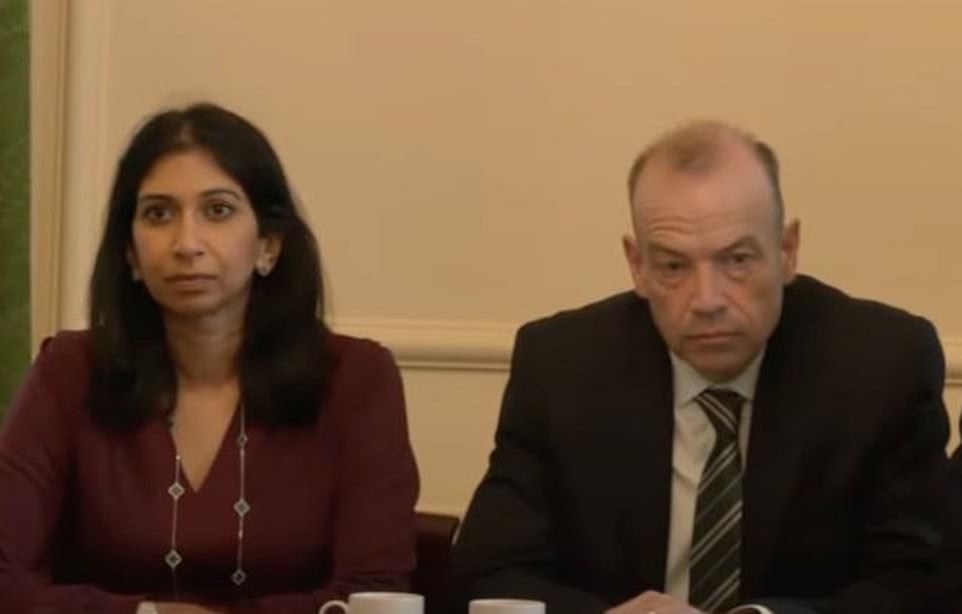 Suella Braverman, the Attorney General, stared blankly ahead next to a miserable Chris Heaton-Harris, the chief whip. His deputy was Chris Pincher until last week

Notably Michael Gove, who notoriously stabbed Mr Johnson in the back to end his leadership hopes in 2016, does not appear to be jumping ship.

However, there has been an ominous silence so far from others such as Nadhim Zahawi, Therese Coffey.

The Prime Minister had told his sombre cabinet that the increase in the national insurance threshold was the ‘single biggest tax cut in a decade’.

The changes will see the point at which people start paying national insurance rise to £12,570, partly offsetting the increase in the rate of the tax previously announced to help fund health and social care measures.

The Government says the move will save an average employee around £330 a year, with 30 million people set to benefit.

Opening a meeting of his Cabinet, Mr Johnson said: ‘It will be in people’s pay packets from tomorrow onwards and amongst other things it is there to help people up and down the country with the cost of living.

‘It’s part of the £37 billion that we are able to spend to help people through the current pressures on food prices, on energy prices, that we are seeing.

‘It shows that the Government is firmly on the side of the British people.’

He said it showed the Government was using its ‘fiscal firepower’ right now, but ‘we are also taking the steps that are necessary to bear down on costs in the medium and the long term as well’.

Mr Johnson singled out Work and Pensions Secretary Therese Coffey for praise at the Cabinet meeting.

‘Tiz (Ms Coffey) did succeed in fulfilling her pledge, she got 500,000 from January off welfare into work. What that did was that saved the taxpayer billions of pounds, it helped employers find the workforce that they need and, of course, it transformed the lives of half-a-million people,’ he said.

The Cabinet was meeting following the resignation of Mr Pincher from the whips’ office over allegations he groped two men in a private members’ club.