Indian variant is now dominant in more than 300 areas of England: Maps reveal how mutant strain has spread across the entire country

The Indian ‘Delta’ variant is now dominant in more than 300 areas of England, MailOnline’s analysis of testing data revealed today.

Figures show the ultra-transmissible strain had overtaken the formerly dominant Kent variant in 303 local authorities by June 12 — just two months after it was seeded in the country.

The Delta variant was found to be behind every sample examined by researchers in 55 areas, most of which were concentrated in the North West, which has been a hotspot for the strain.

The figures highlight just how rapidly the variant has risen to dominance. Just 29 local authorities were detecting any cases of the mutant strain in the middle of April, according to the data from the Wellcome Sanger Institute, one of Britain’s largest variant-tracking labs.

It found the strain was now dominant in all but two of the areas where data was available by the middle of this month – Worcester and Rotherham. It is possible that the Indian variant has already replaced the Kent version in those places in the nine days since the figures were collated.

SAGE’s best guess is that the Delta variant is at least 80 per cent more infectious than the Kent, or ‘Alpha’, variant and spreads more easily in vaccinated people. Two doses of jabs are still highly effective against the Indian strain, however, and prevent up to 96 per cent of people from falling severely ill with the disease.

But PHE believes unvaccinated people are twice as likely to end up in hospital with the strain compared to the Kent one, which is why England’s June 21 Freedom Day was pushed back by a month. 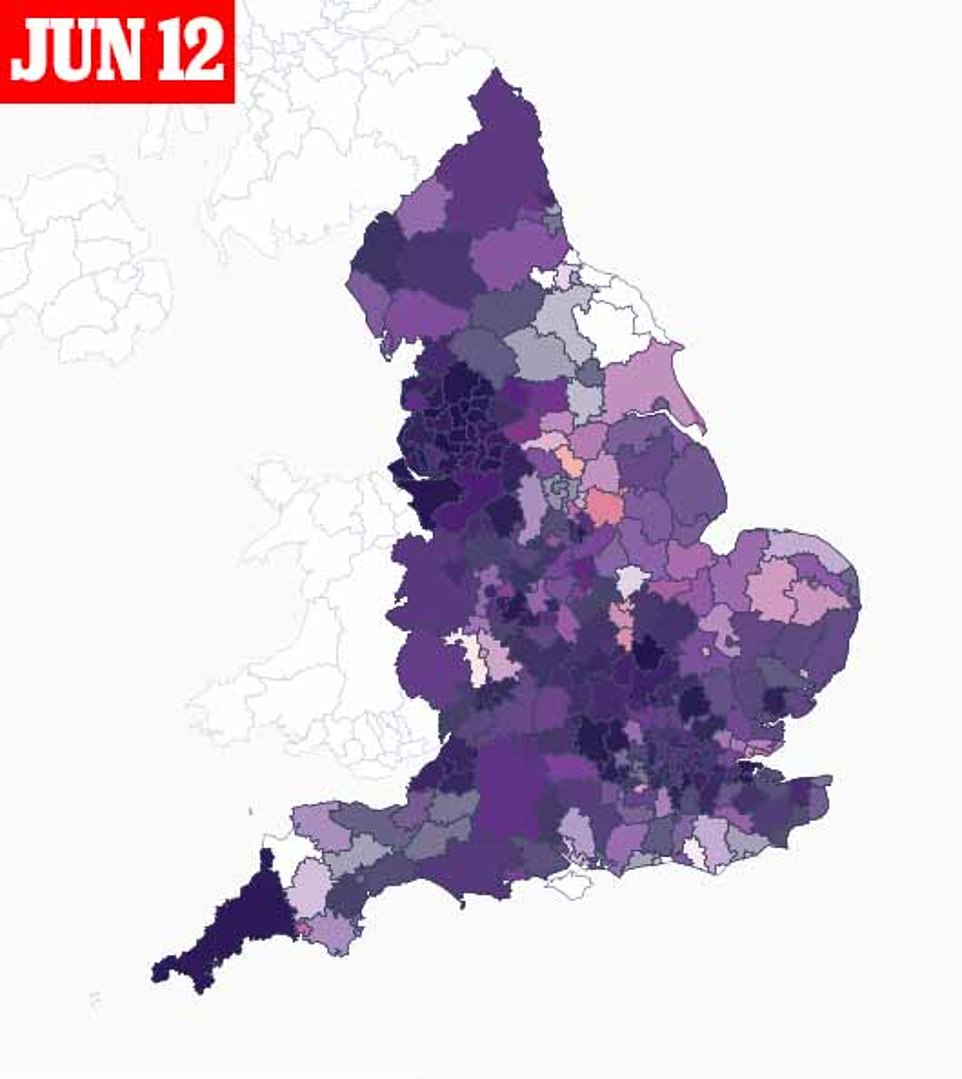 The Indian ‘Delta’ variant is now dominant in more than 300 areas of England, MailOnline’s analysis of testing data revealed today. Figures show the ultra-transmissible strain had overtaken the formerly dominant Kent variant in 303 local authorities by June 12 — just two months after it was seeded in the country 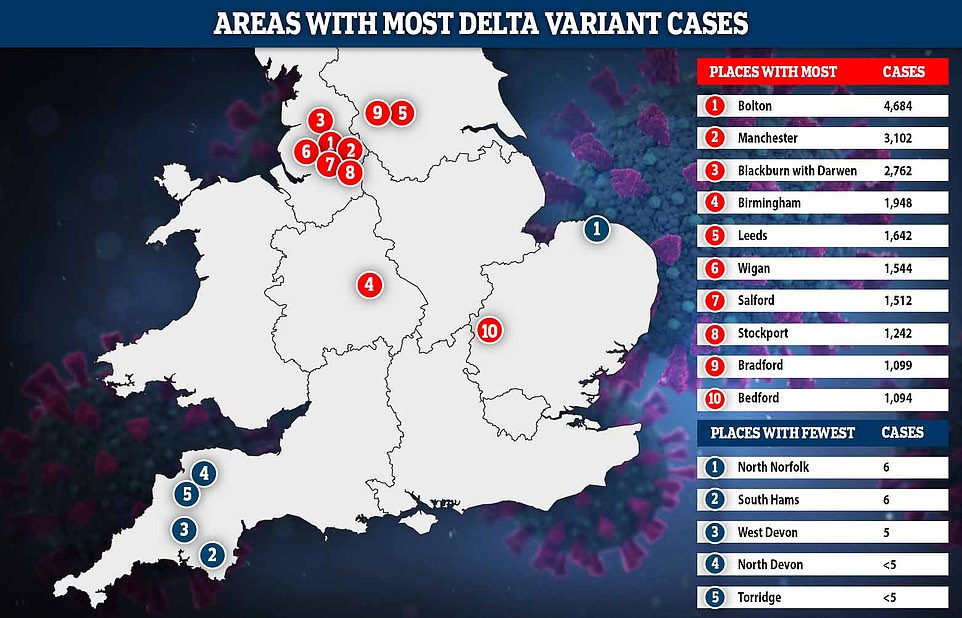 PHE figures from Friday showed that the areas with the most cases of the variant are mostly in the North of England and the Midlands, with fewer infections detected in rural areas in the South West and Norfolk 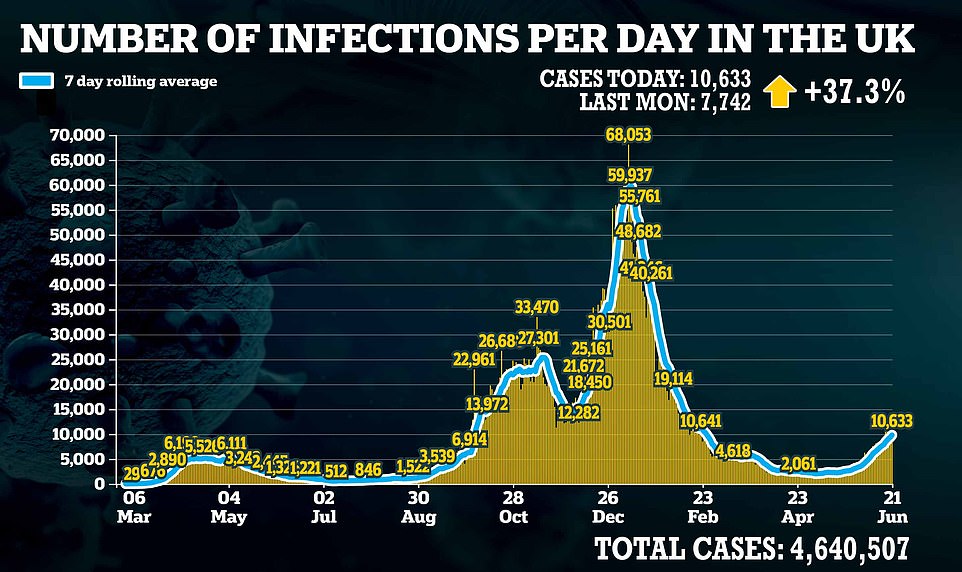 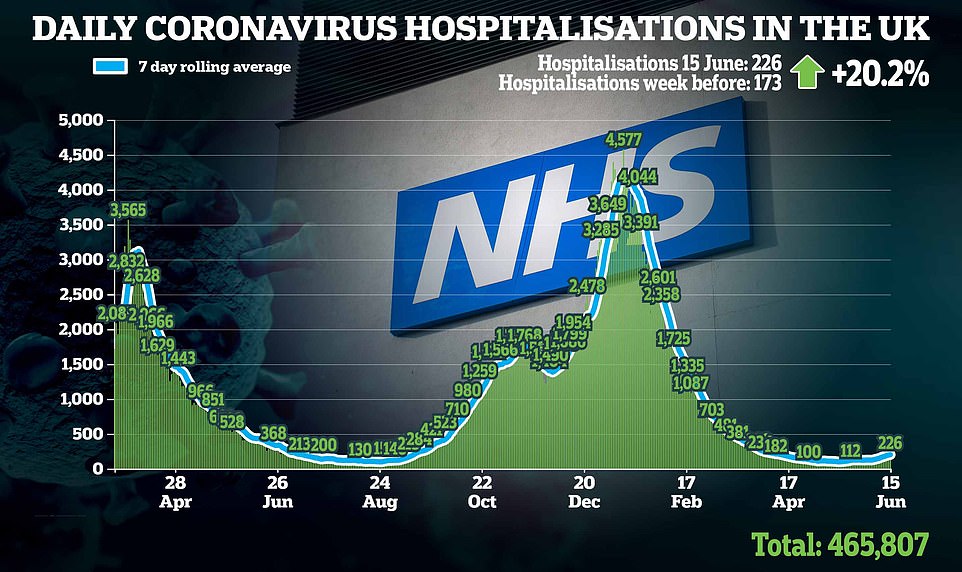 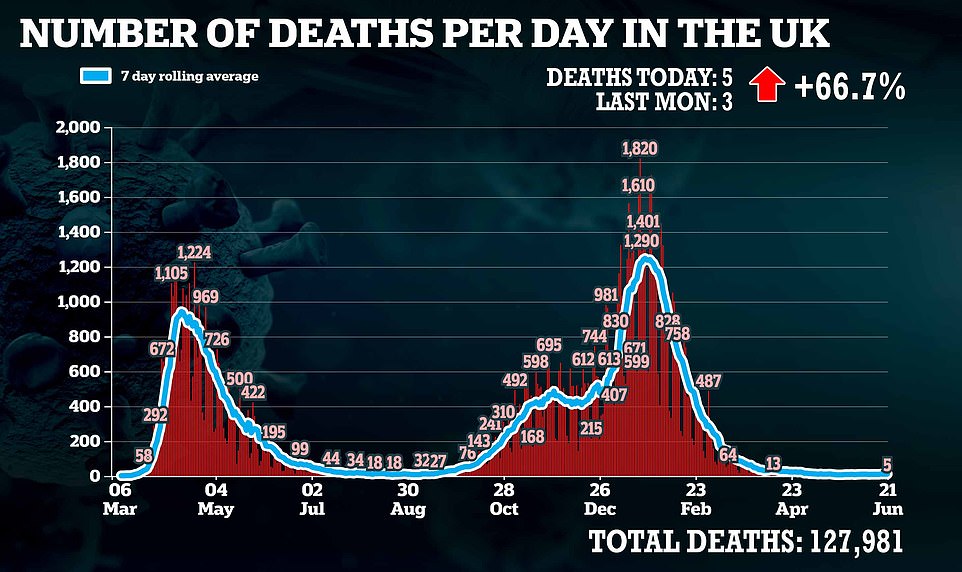 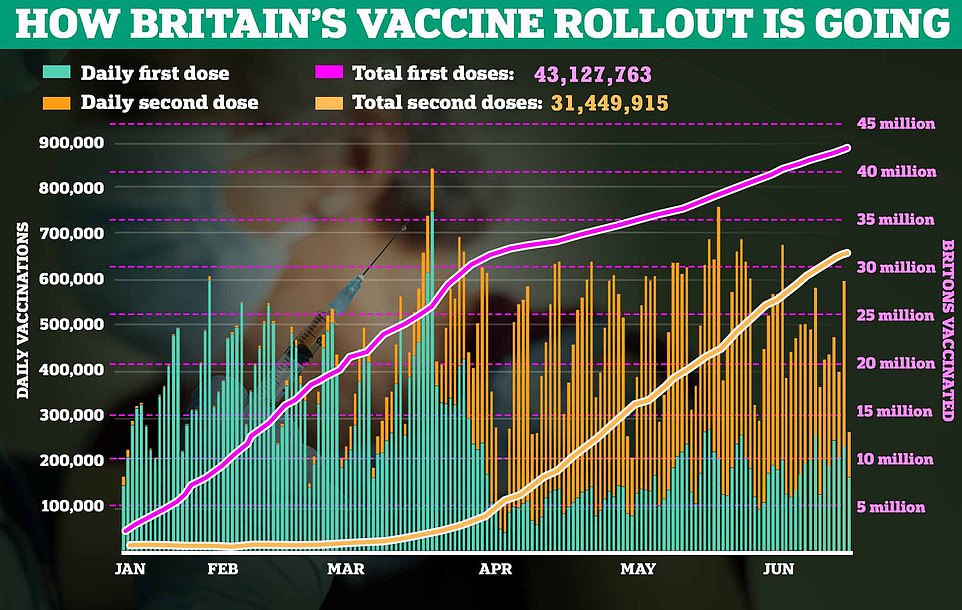 The latest figures show that the number of daily infections has hit 10,633, while 226 people were admitted to hospital and five people died. Over 43million people have now received their first vaccine and 31.4million have received their second

Across the whole of England, 94 per cent of samples were found to be the Indian variant and 5.9 per cent by the Kent variant. This is slightly lower PHE’s 99 per cent estimate because the figures are nine days out of date.

For comparison, the Kent strain was linked to 99 per cent of all cases in England in early April, before the Indian strain was imported into the country.

In the areas where the Indian variant was not dominant by June 12, the researchers found it made up 40 per cent of infections in Rotherham and 45.5 per cent in Worcester.

Ten local authorities, including Darlington, Eastbourne and Hartlepool, did not share their data, so it is unclear how prevalent the strain was in these areas. 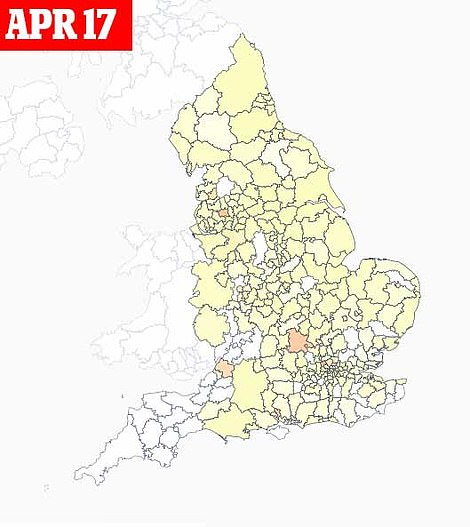 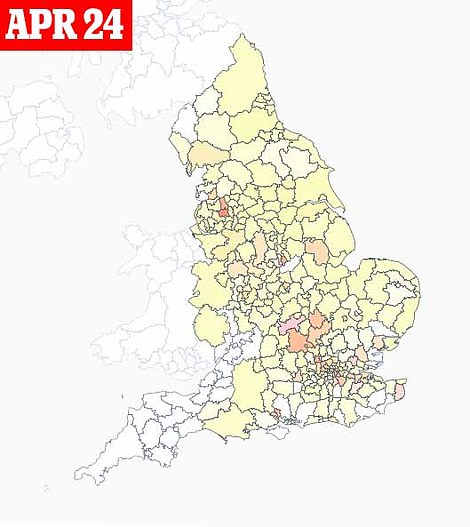 The above maps show the beginnings of the spread of the Indian variant in April. The lightest colours identify the areas that had the lowest proportion of cases of the strain. By April 24, the Delta strain was only responsible for 2.6 per cent of cases 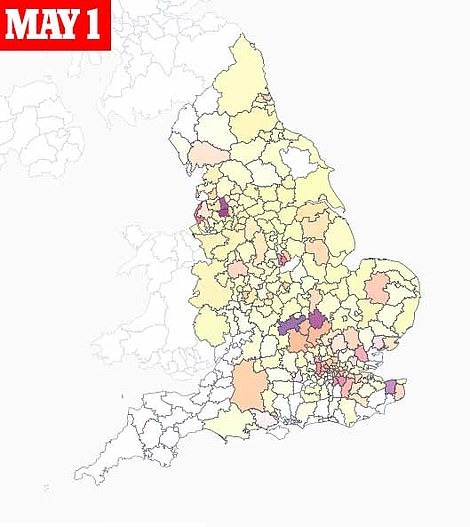 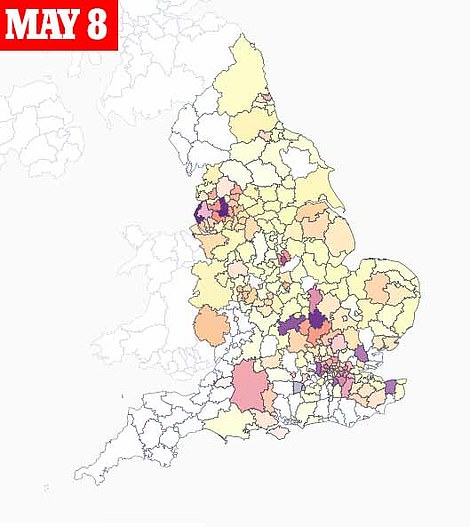 The above maps show the Indian variant spreading across England at the beginning of May. The purple regions were recording the highest proportion of cases that were caused by the Delta strain. By May 8, the mutation was responsible for 20.7 per cent of cases 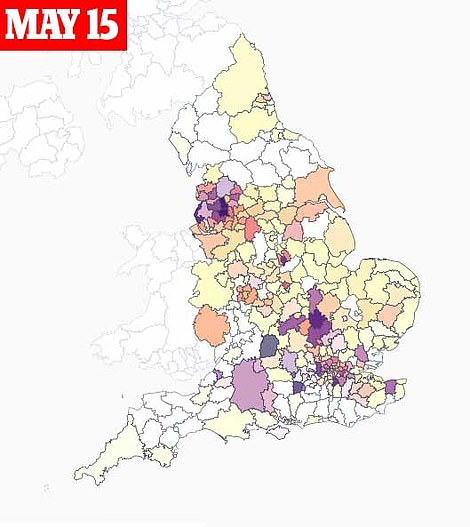 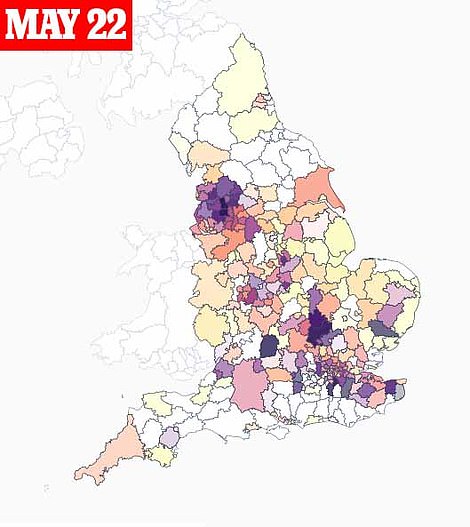 The Delta mutation began to take off across England in mid May and overtook the Kent variant by May 22, with 60.6 per cent of all cases across the country being linked to the strain 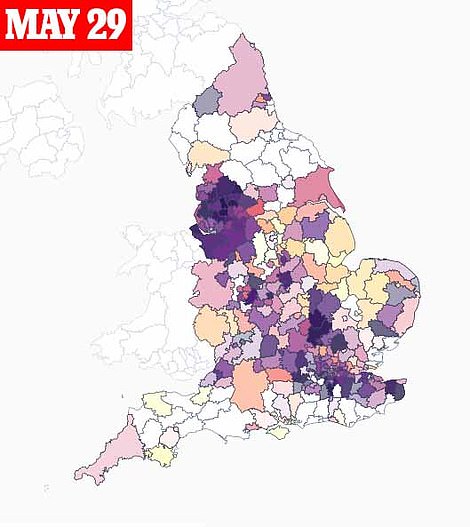 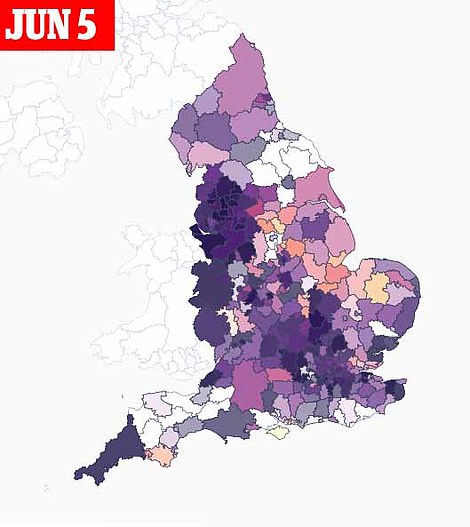 By the end of May, the Indian mutation caused 77.7 per cent of cases across England, while the once-dominant Kent strain was responsible for just 21.8 per cent 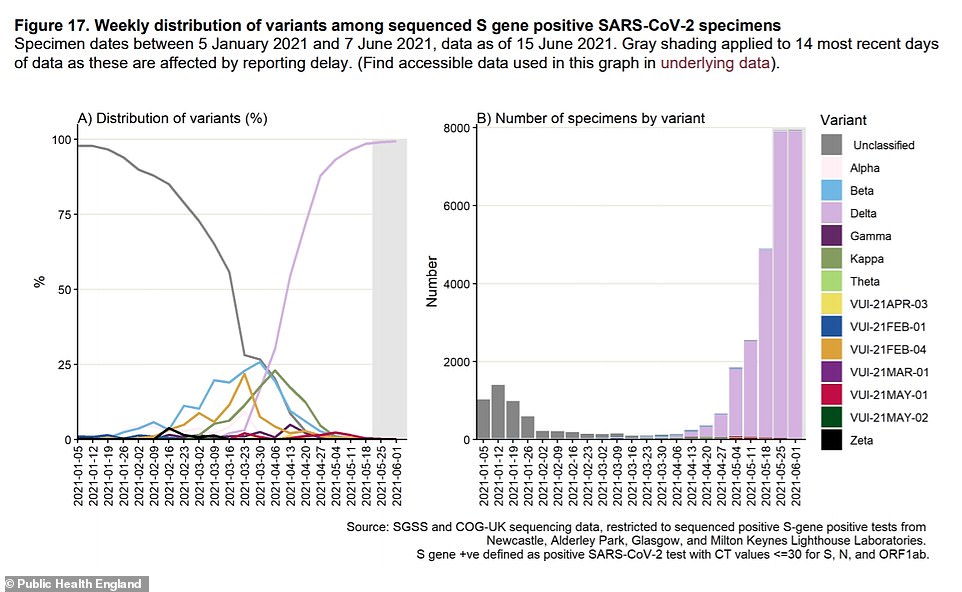 Graph left: A Public Health England report published on Friday revealed the fast-spreading variant has now completely taken over in Britain and it makes up 99 per cent of cases. Graph right: Lab testing shows that the Delta variant (pink) has accounted for thousands of cases (specimens) in recent weeks and case numbers are soaring. It has dwarfed all other variants, shown in different colours. The Kent variant is not shown in the graph because it looks at only ‘S gene positive’ cases which are ones that the swab test works perfectly on. The virus’s S gene on the Kent variant cannot be detected by swab-testing so it is classed as an ‘S gene negative’ variant. ‘Unclassified’ tests are strains that were not categorised as a specific variant, likely because they came in such small numbers compared to the Kent variant in January

Meanwhile, Britain’s daily coronavirus case have risen by another third in a week, official figures revealed today after Boris Johnson warned more lockdowns could still be on the cards this winter.

Department of Health bosses recorded 10,633 positive tests in the last 24 hours — up 37.3 per cent on last Monday’s count — with the national uptick in cases fuelled by the highly-transmissible Indian variant, which MailOnline today confirmed was now dominant in more than 300 areas of England.

Despite cases steadily increasing since mid-May, the number of people dying from the disease has stayed relatively flat, in a key sign the vaccines have broken the link between infections and fatalities. Five victims were added to the official toll today, compared to three last week.

But hospital admissions — which also lag weeks behind any spike in positive tests because of how long it takes for infected patients to become severely ill — have risen by another 20 per cent in the space of a week.

The data came as the Prime Minister poured cold water on the prospect of easing the remaining coronavirus rules early, as he refused to rule out future lockdowns and warned the nation should brace for a ‘rough winter’.

No10 has delayed ‘freedom day’ by four weeks to July 19 but a two-week review will take place on July 5 to see if the return to normal can be moved forward.

Mr Johnson struck a pessimistic tone during a visit to a laboratory in Hertfordshire as he said ‘Delta’ variant cases, hospitalisations and admissions to intensive care are still rising and the country must therefore be ‘cautious’. But he insisted it is ‘looking good’ for the rules to be lifted at the ‘terminus point’ of July 19 as he said the ‘vaccination rollout is going gangbusters’.

However, he declined to rule out re-imposing draconian curbs later in the year as he warned ‘some new horror’ could emerge which ‘we simply haven’t budgeted for’.

Meanwhile, the PM also dashed hopes of international travel being opened up in time for summer holidays as he admitted foreign trips this year will be ‘difficult’ – despite ministers drawing up plans to scrap quarantine rules for returning double-jabbed Britons.

Travel experts said they fear ministers will not ‘open things up very much at all until August’ as the industry faces another disastrous summer. Mr Johnson said it is his priority to keep Britain ‘safe’ and block dangerous new Covid variants from entering the country, which means anyone looking to fly abroad in the coming months is likely to face ‘hassle’ and ‘delays’.

The remarks appear to contradict recent comments from Cabinet ministers who have suggested the Government is actively looking to give fully vaccinated people more freedoms.

The PM said: ‘I want to stress that this is going to be – whatever happens – a difficult year for travel. There will be hassle, there will be delays, I am afraid, because the priority has got to be to keep the country safe and stop the virus coming back in.’

Matt Hancock had just hours earlier raised the prospect of foreign travel rules being loosened when he confirmed that Israel-style plans to scrap isolation for fully vaccinated people returning to the UK were being considered by the Government.

The Health Secretary said ministers were ‘working on’ relaxing restrictions for double-jabbed adults and their children, which could see the current mandatory 10-day self-isolation from amber and red list countries replaced with daily Covid tests.

But he said Downing Street could not press ahead with the plan for 31.3million Britons just yet because they are waiting for experts to analyse data from a pilot scheme to see if ‘it will be effective’.

Tory MPs, hospitality chiefs and travel bosses are all hopeful the PM will accelerate the nation’s exit from lockdown.

But Mr Johnson appeared to suggest that is unlikely as he painted a grim picture of the spread of the ‘Delta’ variant.

Asked whether he will bring forward ‘freedom day’, the Prime Minister said: ‘As I say, the vaccination rollout is going gangbusters and loads of people are coming forward now for their second jabs.

‘Please come forward, get your second jab, and it is great that today we will have done all of JCVI one to nine, so everybody over 50 will have been offered two jabs as of today plus all care workers, all the vulnerable groups, huge numbers of people.

‘I think almost 60 per cent of adults in this country have now had or been offered two jabs so we are one of the most vaccinated countries in the world.

‘But look at the numbers of delta, the ‘Delta’ variant, it is sadly going up still, it is going up by about 30 per cent a week in cases, hospitalisations up by roughly the same amount and so sadly ICU admissions into intensive care.

‘So we have got to be cautious but we will be following the data the whole time.’

Mr Johnson said it is still ‘looking good’ for the July 19 reopening date amid fears among some Tory MPs that the PM could again delay the lifting of the remaining curbs.

Asked to rule out further lockdowns in the future, the premier said: ‘You can never exclude that there will be some new disease, some new horror that we simply haven’t budgeted for, or accounted for.

‘But looking at where we are, looking at the efficacy of the vaccines against all variants that we can currently see – so Alpha, Delta, the lot of them, Kappa – I think it’s looking good for July 19 to be that terminus point.

‘I think what the scientists are saying is that things like flu will come back this winter, we may have a rough winter for all sorts of reasons, and obviously there are big pressures on the NHS.

‘All the more reason to reduce the number of Covid cases now, give the NHS the breathing space it needs to get on with dealing with all those other pressures, and we are certainly going to be putting in the investment to make sure that they can.’