With the benefit of hindsight, Twitter’s decision to expel its poster man-child, super-user over the assault on the US Capitol was inevitable.

Donald Trump did not just embrace the social media model of noise, outrage and over-sharing to build his network of more than 88 million followers, he helped build the insight that when it’s a pure race for scale, objective facts no longer matter. In fact anger-fuelled feels work so much better. 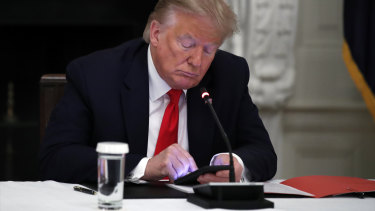 Donald Trump was not just a super user, he helped generate insights into how to build mass followings.Credit:AP

A career huckster, Trump intuitively tapped this vein of virality, gaming first the traditional media, then the Republican Party, and finally the US democratic system with his virtual fantasy world.

The impact of Trump’s excesses are a feature, not a bug, of networks designed to make money by observing users’ behaviour and then selling access to them. The algorithms behind this alchemy give users what they want, push them into self-reinforcing bubbles and privilege content that inspires a fevered response over sober truth-telling.

In fact, the final two tweets that triggered the permanent suspension of @realDonaldTrump – continuing the lie of his election "win" and stating he would not attend Biden’s inauguration – were nowhere near the most outrageous of his 59,000 thought bubbles. But in pulling the pin, Twitter determined the context was that they could incite violence and were, thus, no longer tenable.

By finally conceding the need to act on the context of Trump’s posts, Twitter – along with Facebook and Instagram – are not just drawing a line, they are conceding a point that has been long-contested: the platforms are not just some utility that exist to allow the flow of information, they are more akin to publishers.

Similar concessions are implicit in the more active way platforms are treating conspiracy theories and disinformation around the coronavirus, as well as the decision by Google and Apple to remove the network Parler, which has emerged as an alternative social network for right-wing activist groups, from its marketplace.

But while addressing Trump and his ecosystem within these networks is welcome it is not a systemic solution to protect democracy. If platforms are going to assert such a central role in our lives, they need to invest in the tools, both technological and human, to ensure they are running civil and civic communities.

The Centre for Responsible Technology proposes a more active approach, recognising that only enforceable rules will protect us from the next Trump and all the little conspiracy theories that will enable their rise.

First, steps need to be taken to slow down the speed that lies spread across networks by creating points of friction, where users are encouraged to reflect and question. To its credit, Twitter has begun to put warnings and encourage users to actually read a link before sharing. More active correction of falsehoods and transparency about how information is being shared are other ways to encourage a more critical consumption of social feeds.

Second, all the social networks need to be clearer about the way their algorithms rank, target and socialise content. Should positive interactions be given the same weight as negative ones? Should real users’ activity be treated more seriously than bots? While the platforms claim their algorithms are commercial secrets, accessing the "black box" in the way a car manufacturer’s engine mechanics can be scrutinised should not be controversial.

Finally, the Trump parallel universe has reinforced that objective, fact-based news reporting is not just another form of "user content". As Google and Facebook continue to rail against the news bargaining code, it’s worth reflecting that premium journalistic content is – in and of itself – a potent weapon against disinformation that should be valued.

Taking responsibility for their impact is a significant shift in the mission of social media platforms, but in the real world that is what all businesses, especially publishers, are legally required to do.

US power and politics

Understand the election result and its aftermath with expert analysis from US correspondent Matthew Knott. Sign up here.